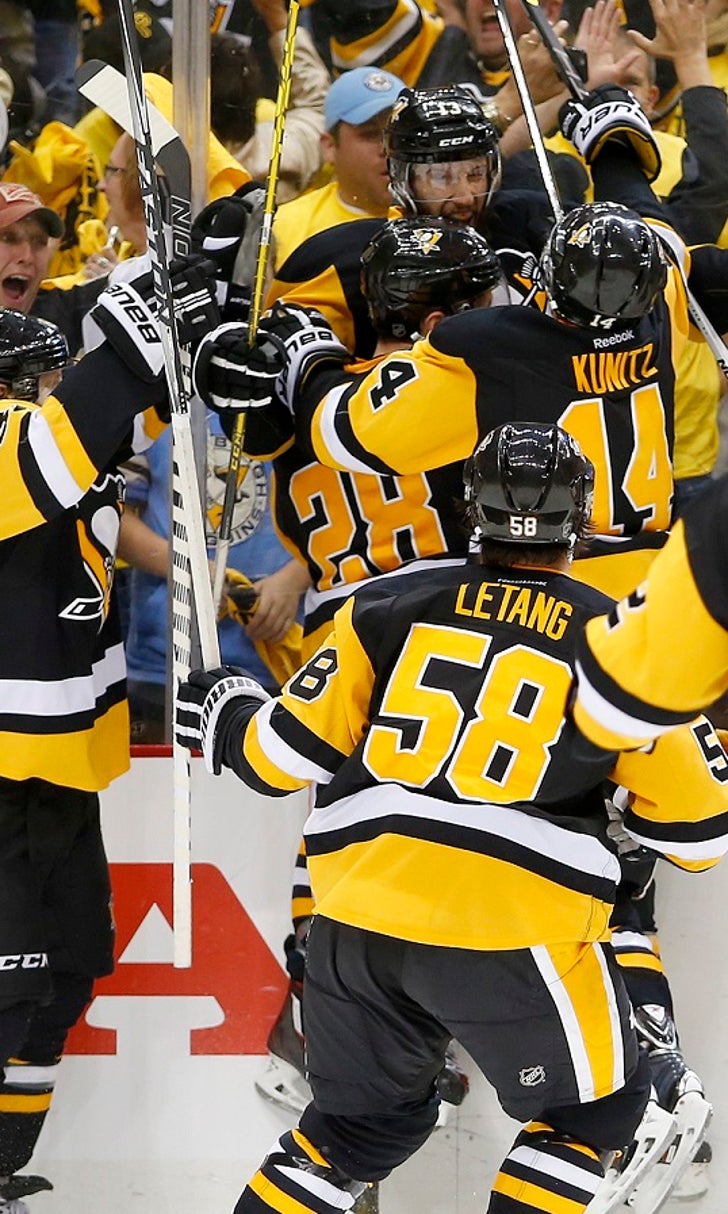 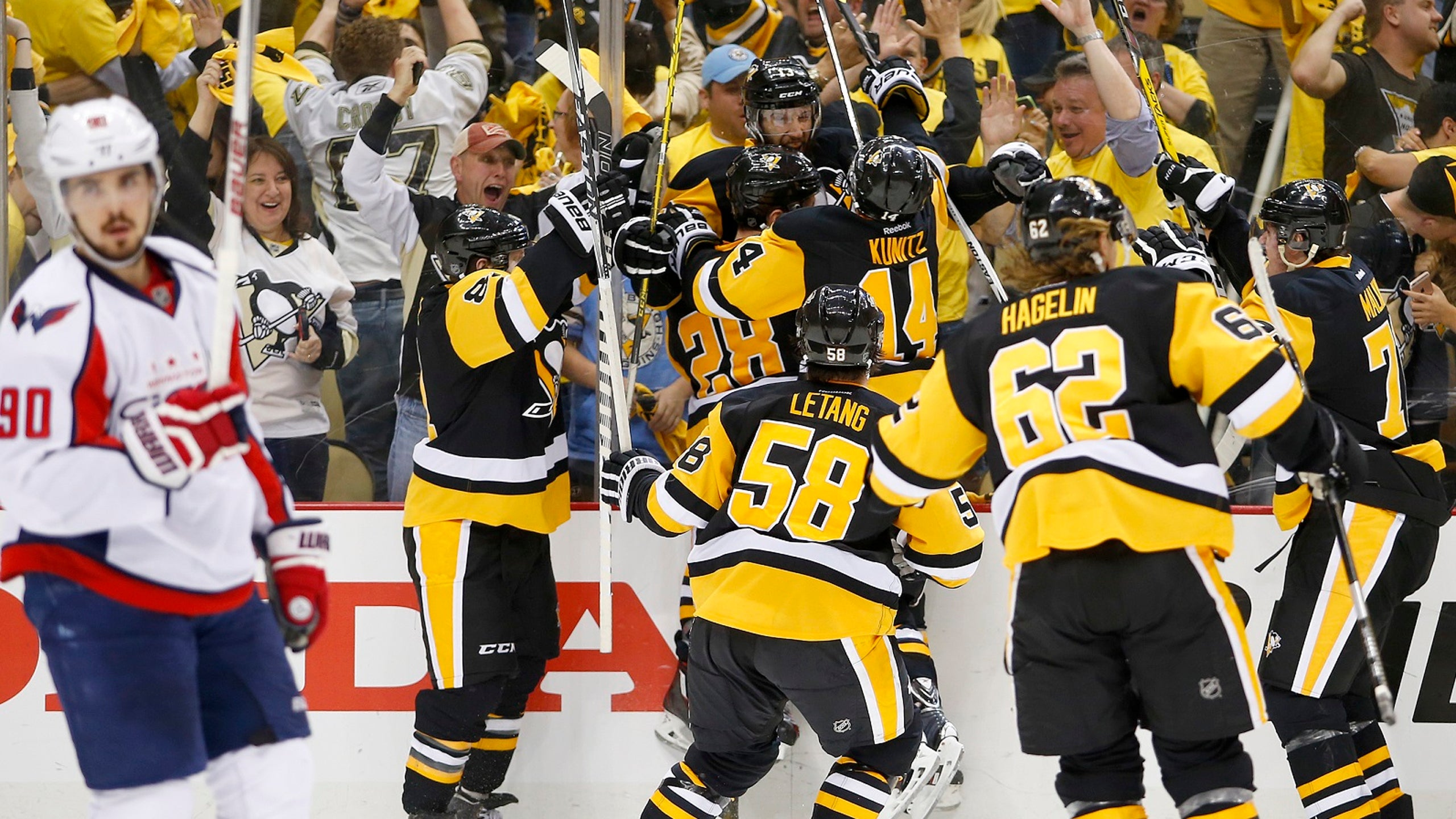 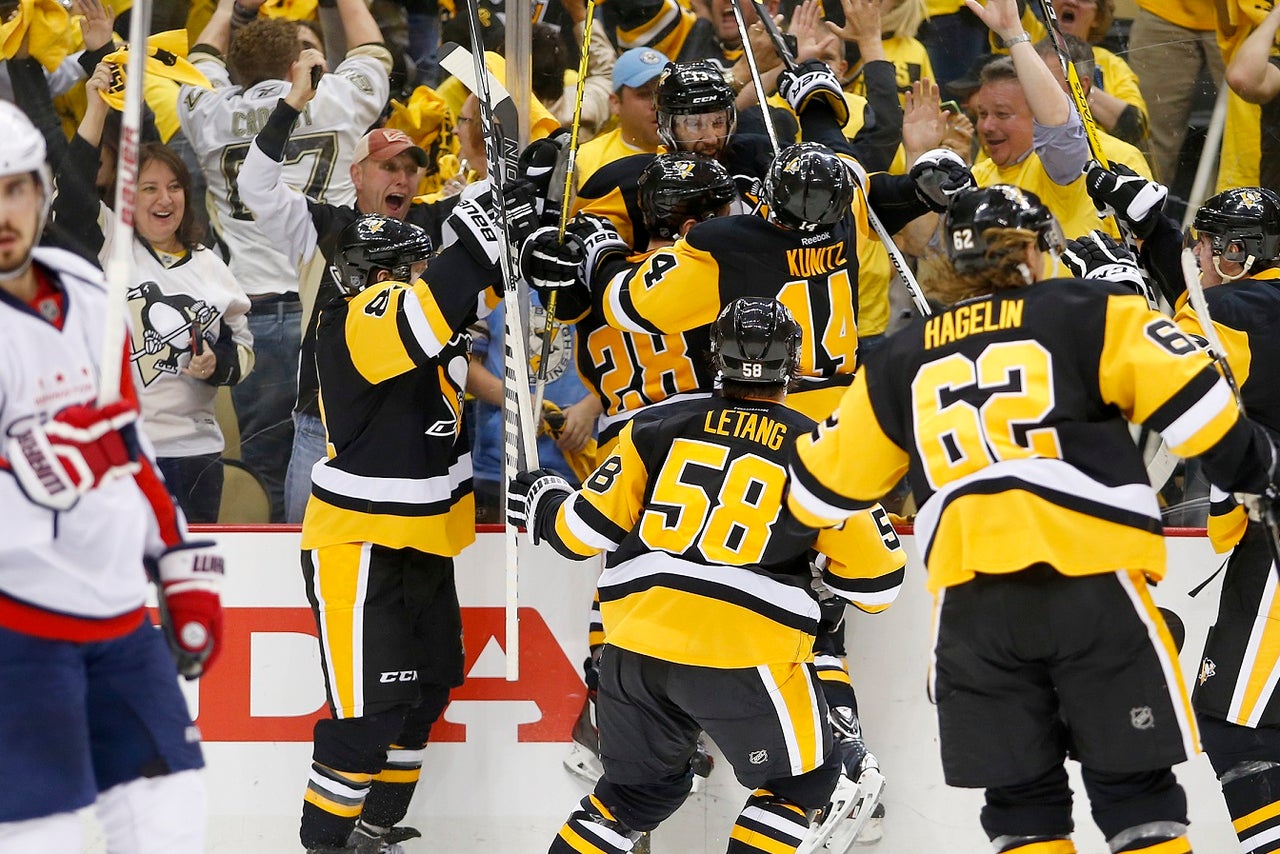 PITTSBURGH -- Nick Bonino put a rebound past Braden Holtby 6:32 into overtime to give the Pittsburgh Penguins a 4-3 win over the Washington Capitals on Tuesday night to wrap up the hotly contested Eastern Conference semifinal in six games.

The Capitals rallied from a three-goal deficit over the final 22 minutes of regulation, but Bonino's second goal of the playoffs sent the Penguins to the Eastern Conference final against Tampa Bay.

Holtby made the initial stop on Carl Hagelin but Bonino, camped right outside the crease, tapped in the winner.

Washington forward Jay Beagle made a remarkable save from his belly in front of the net on Patric Hornqvist early in overtime but there was no stopping Bonino's tap-in.

There is nothing quite like a series-clinching playoff OT win. ? pic.twitter.com/j8RoZ6cjhC

Rookie Matt Murray made 36 saves as the Penguins continued their playoff mastery over the Capitals.

Nine times the longtime rivals have met in the playoffs. Eight times the post-series handshake line has ended with Pittsburgh celebrating while Washington trudges toward the offseason.

The Presidents' Trophy winners avoided elimination with a solid 3-1 win in Game 5 but the Penguins -- who squandered 3-1 series leads in the 2011 and 2014 playoffs -- preached patience and pointed to their remarkable resiliency under Mike Sullivan, who took over in mid-December.

Pittsburgh ended the regular season as the hottest team in the league and has now cruised through two rounds by relying on the depth general manager Jim Rutherford has cultivated behind stars Sidney Crosby and Evgeni Malkin.

No "Bones" about it! We're bound for the next round. Full video replay: https://t.co/w08r4jgUyX pic.twitter.com/TKtzmUgyNk

All but two of Pittsburgh's 15 goals during the series were scored by players who were not on the roster when Rutherford replaced Ray Shero two summers ago. That group includes Kessel, acquired from Toronto last July to take some of the scoring load off Pittsburgh's two franchise cornerstones, Hagelin and Bonino, who were Pittsburgh's best line in the series.

Kessel gave the Penguins the lead 5:41 into the first with a wrist shot that whizzed by Holtby's blocker for his fourth goal of the playoffs.

The Penguins then dominated much of the next 20 minutes with nothing to show for it until Washington defenseman Brooks Orpik -- returning after serving a three-game suspension for an illegal hit on Pittsburgh's Olli Maatta in Game 2 -- drew a double minor penalty for high-sticking Patric Hornqvist.

Kessel made it 2-0 by faking a shot from the circle then deking past a sprawled Holtby 7:05 into the second. Hagelin pushed Pittsburgh's lead to three 33 seconds later by deflecting Maatta's shot from the point.

Giving Pittsburgh's lethargic power play -- which came in 1 for 16 in the series -- the jolt it needed to seemingly send the Capitals home once again.

What a game! Here's a look at our Game 6 stat infographic: https://t.co/t8jCKP0vHM pic.twitter.com/J8m9IhiKob

Oshie's power-play goal with 1:30 left in the second gave the Capitals a chance, but seemingly not much. The Penguins came in 44-0 when leading after two periods, but then things started to get weird.

Williams put in a wraparound past Murray 7:23 into the third, his 14th goal in 19 career games when his team is facing elimination.

Still, Pittsburgh appeared to be on solid footing until a bizarre sequence in which Chris Kunitz, Ian Cole and Bonino flipped the puck over the glass from the defensive zone in a span of 2:02.

Carlson's fifth playoff goal, a shot that bounced and skipped by Murray during the ensuing 5-on-3 tied it with 6:59 to play and provided another strange twist in a series that lived up to -- and perhaps beyond -- its billing.

NOTES: Washington defenseman Karl Alzner left in the first period and did not return shortly after getting slashed by Crosby. ... Holtby finished with 37 saves. ... The Penguins went 2 for 3 on the power play. The Capitals were 2 for 6. ... The Penguins scratched defensemen Justin Schultz and Derrick Pouliot following Maatta's return.