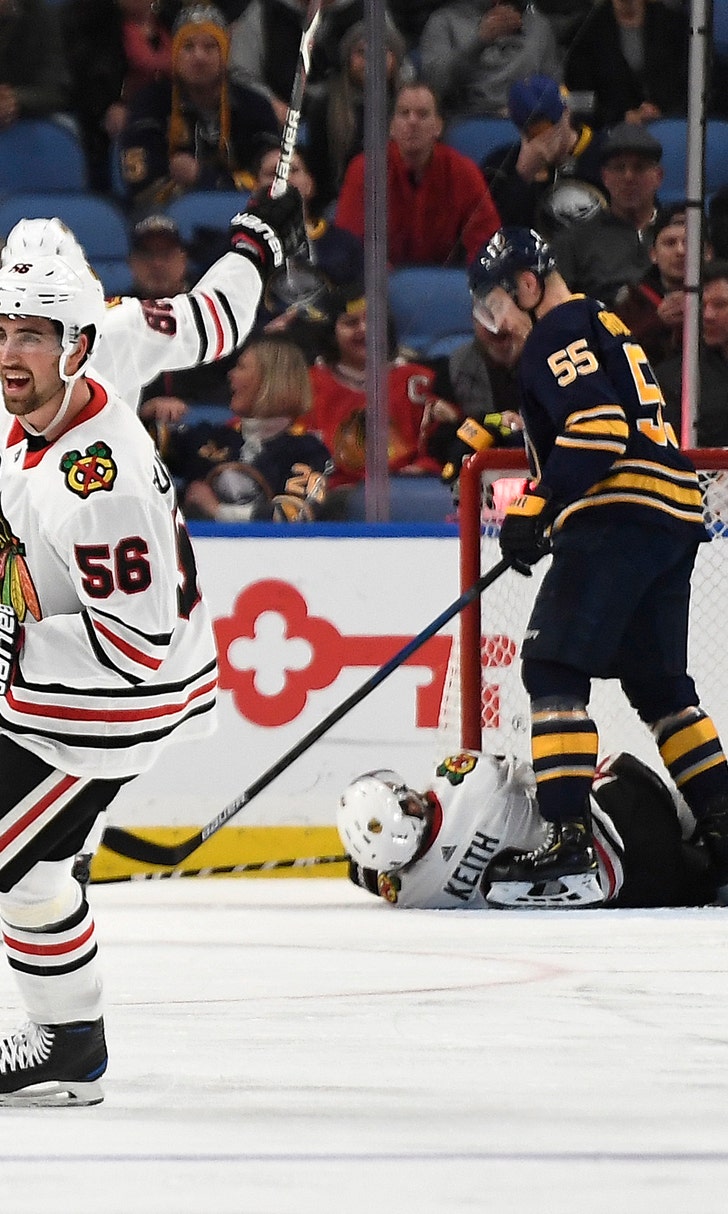 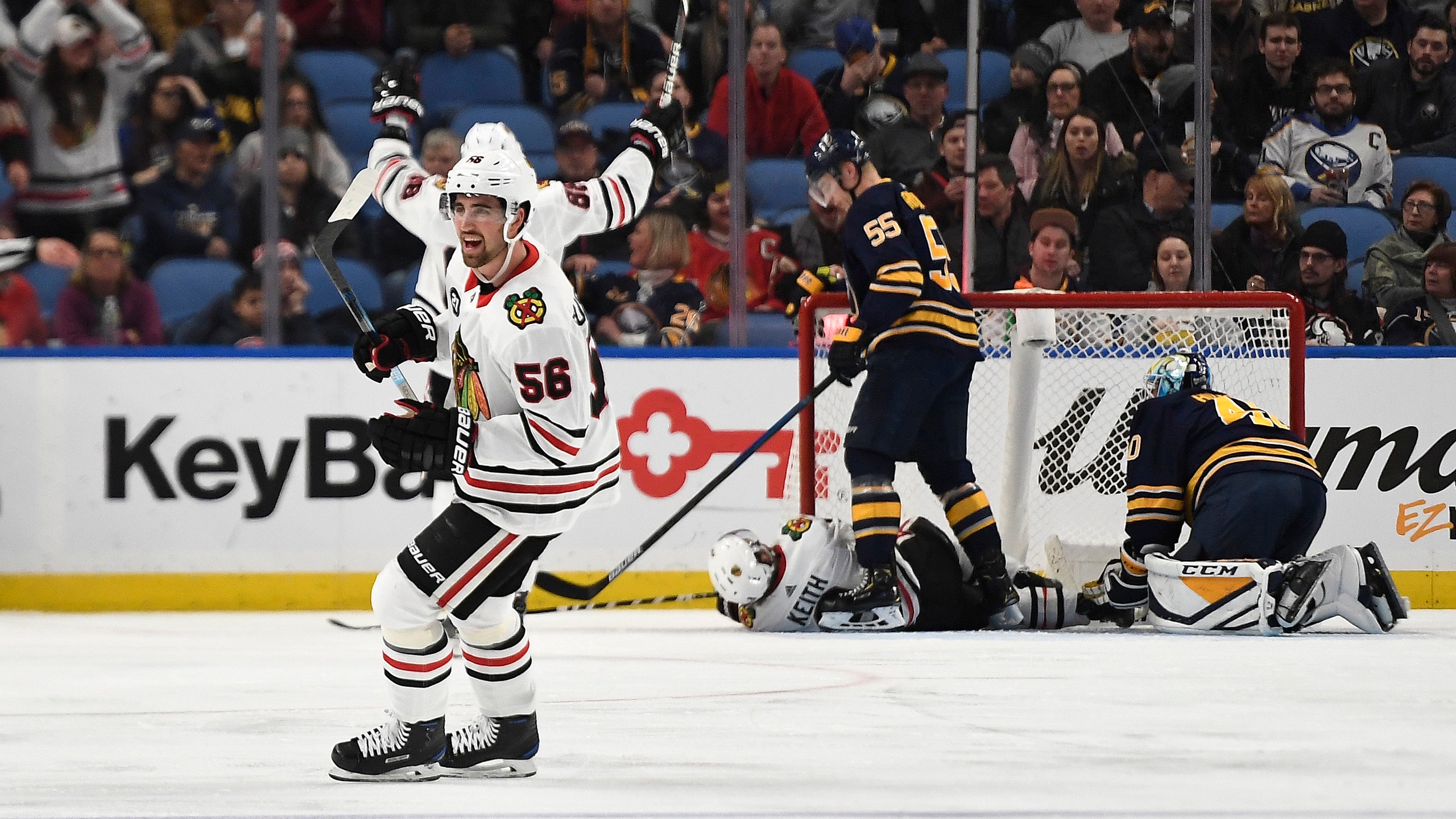 BUFFALO, N.Y. (AP) — Upon failing to reach the 900-point plateau in Chicago before the Blackhawks opened a three-game road trip, Patrick Kane couldn't think of a second-best place to do so than during his annual Buffalo homecoming.

"You come here and you do it back at home with a lot of people here and a lot of people knowing that's the 900th, it's pretty exciting. It makes it even better," Kane said. "Yeah, it would've been nice to get it before, but now that it happened here, you think it worked out for a reason."

The 30-year-old from south Buffalo put on a show by scoring two goals and two assists in blasting through the milestone during a 7-3 win over the Sabres on Friday night.

Kane capped the win with an empty-net goal in upping his career total to 903 points . He became the youngest U.S.-born player to reach 900 points, and moved ahead of Tony Amonte for 12th place among Americans.

Kane also extended his point streak to 10 games, in which he has combined for nine goals and 16 assists.

Though he was unable to make a side trip to his favorite pizza place, Kane had time to meet with about 50 members of his family and friends in the southeast corner of the arena before the Blackhawks flew to Minnesota for their game against the Wild on Saturday night.

"It would've been nice to sneak it in," Kane said, of popping in for a slice and wings. "Just going to have to wait for the summer."

Connor Murphy sealed the victory by converting Kane's pass into the middle and snapping in a 30-footer through a screen to put Chicago up 5-3 with 8:36 remaining.

Jason Pominville and Kyle Okposo scored goals 3:37 apart in cutting Chicago's lead to 4-3 with 12:44 left. Jack Eichel also scored in a game the Sabres trailed 3-0 through the first 26:06 and 4-1 through two periods.

This was not how the Sabres intended to open a seven-game homestand while playing their first game in Buffalo in nearly three weeks, following a five-game road trip which also spanned an 11-day break.

"You can't win a game giving up seven goals," Eichel said. "I think the learning experiences are far over now. We're 50-some odd games into the season. ... These mistakes are costing us points and that's points in the standings that we can't lose."

Buffalo dropped to 2-6 in its past eight and is 8-14-7 since matching a franchise-best 10-game winning streak in November.

The Sabres failed to capitalize on numerous chances in the first period, and were outshooting the Blackhawks 14-6 before Caggiula scored with 1:22 left. Caggiula was set up alone in front by Gustav Forsling, who intercepted Sam Reinhart's weak breakout pass attempt at the left point.

Jeff Skinner's turnover led to Erik Gustafsson setting up Kane for a breakaway goal 50 seconds into the second period. Keith, with an assist from Kane, converted his own rebound to put Chicago up 3-0 a little over four minutes later to break open the game.

The 30-year-old Kane reached the 30-goal mark for the fourth time in his 12-year career. And he continued his domination in Buffalo, where Kane has scored a point in each of his eight visits in combining for seven goals and six assists.

"Obviously, nice to score on your first shift in the second to give you some confidence," Kane said, acknowledging he's usually nervous before each game he plays in Buffalo.

"I'm really happy for him," Blackhawks coach Jeremy Colliton said. "It's hard to come back and play in your hometown. Sometimes you're pressing and it always doesn't work."

NOTES: Kane became just the third Blackhawks player with five career point streaks of 10 games or longer, joining Denis Savard, who did it 11 times, and Bobby Hull (five). ... Saad played his 500th career game. ... Okposo scored on the power play, Buffalo's first goal with the man advantage in seven games. The Sabres converted 1 of 3 power-play chances to improve their anemic production to 10 of 74 over their past 27 games.

Blackhawks: At Minnesota Wild on Saturday.