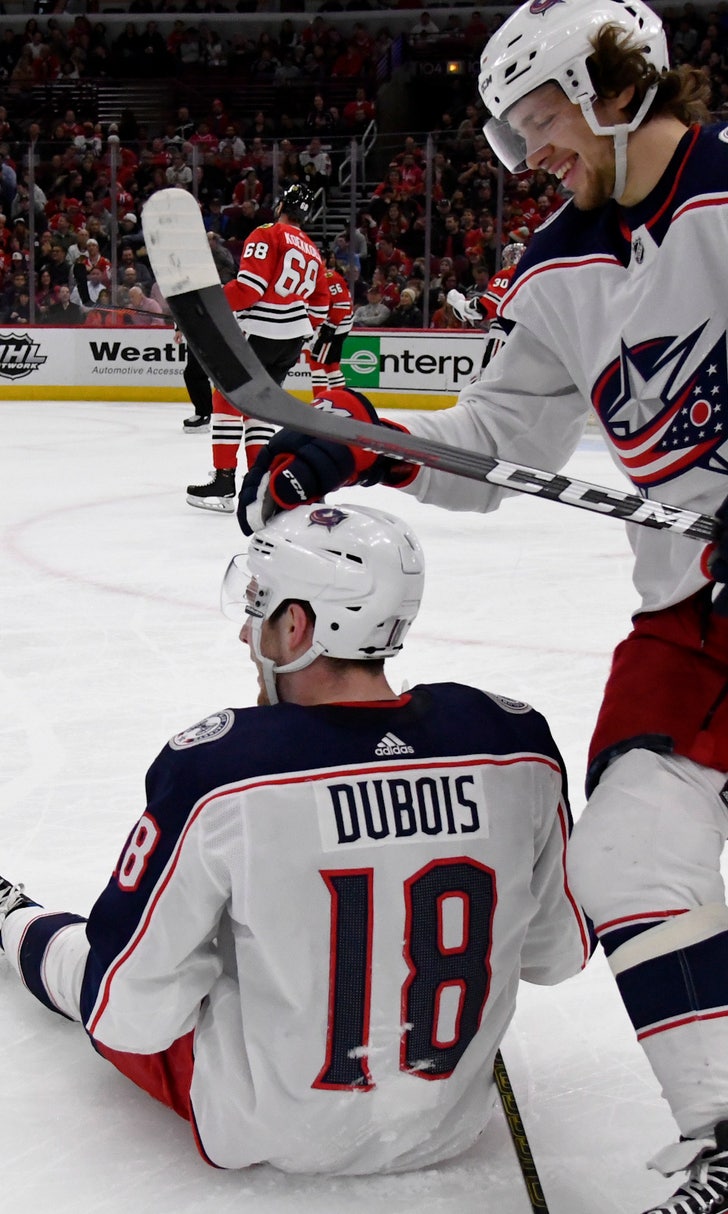 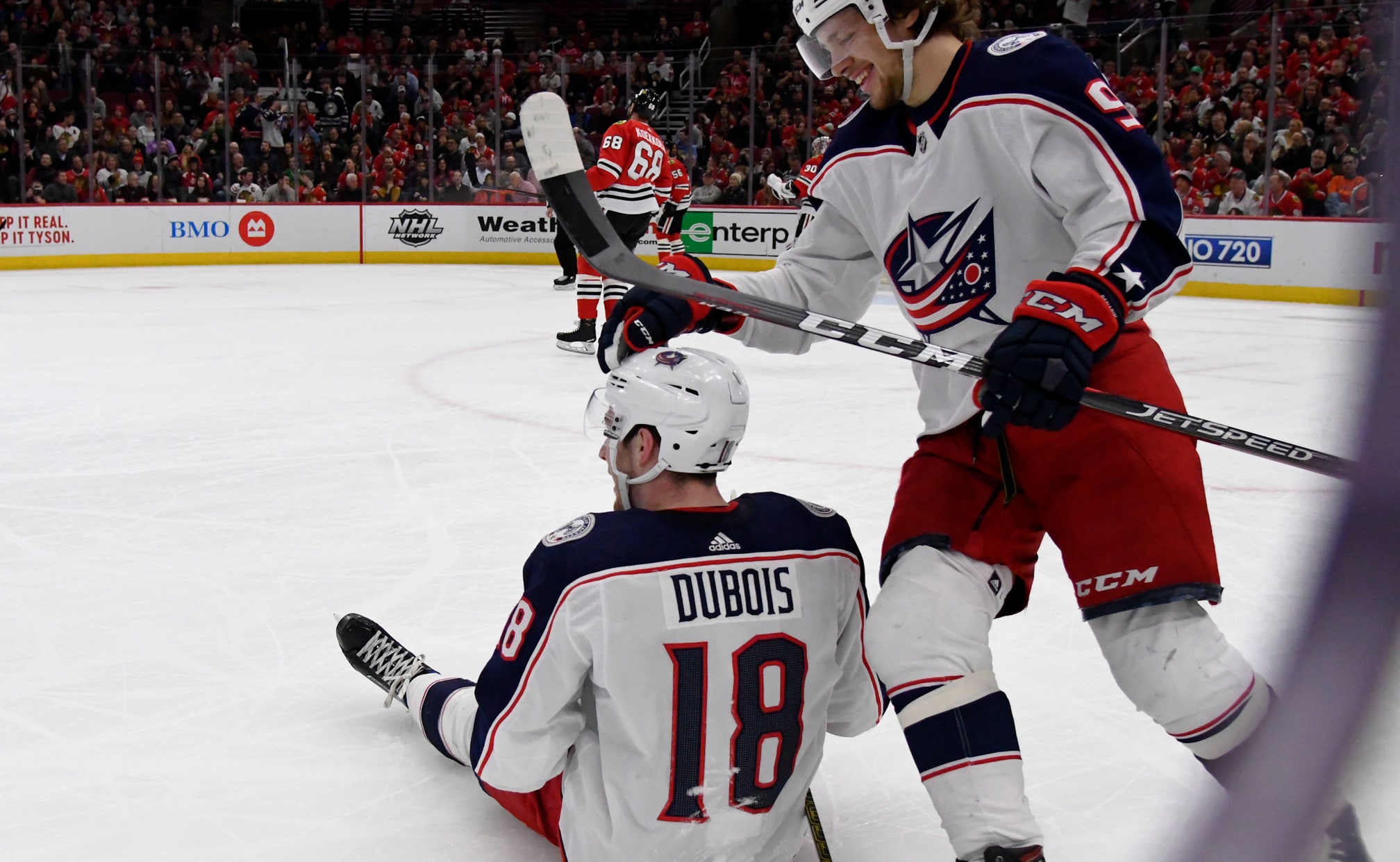 CHICAGO (AP) — Artemi Panarin had a big night against his former team, making the most of a little luck.

Panarin had two goals and an assist, and the Columbus Blue Jackets beat the Chicago Blackhawks 5-2 on Saturday night for their fifth win in six games.

Pierre-Luc Dubois added a goal and an assist for Columbus, and Sergei Bobrovsky made 39 saves in his sixth straight start. Cam Atkinson and Josh Anderson also scored.

"I thought everybody contributed, but the top line did some damage," coach John Tortorella said.

The 27-year-old Panarin began his NHL career with Chicago. He had 61 goals and 90 assists in 162 games with the Blackhawks before he was traded to the Blue Jackets in June 2017.

Panarin said he misses the fans in Chicago and stays in touch with former linemate Patrick Kane. But he relished an opportunity to do some damage against his old club.

"It was very important for me to score in general, especially against the Blackhawks, and it was important for my team," Panarin said through a translator. "I have today, twice more (motivation) of everything. Nobody can hold me down."

Chicago had won eight of nine to get back into the wild-card race in the crowded Western Conference.

"I think a lot of things are still there," Blackhawks coach Jeremy Colliton said. "I'm not sure it's so different. I think the results are different.

"Honestly, we didn't have the full 60 (minutes) we wanted, but there still were some good sports that allowed us to stay in the game."

Kane had a goal and an assist while extending his point streak to 17 games, matching the longest in the NHL this season. Jonathan Toews also scored for Chicago.

The Blue Jackets scored on three of their last four shots in the first period to take a 3-1 lead.

DuBois opened the scoring at 12:36 when he cut around Chicago defenseman Erik Gustafsson on the left wing, gained a step and fired a shot over Cam Ward's shoulder.

Kane responded with a power-play goal with 3:46 left in the period. Kane beat a lunging Bobrovsky with a screened shot from the right circle after Alex DeBrincat made a cross-ice feed.

It was Kane's 35th of the season. The dynamic winger has 13 goals and 24 assists during his point streak.

Columbus went ahead to stay when Panarin converted a one-timer from the slot just 17 seconds after Kane's goal. Panarin seemed to be covered by Chicago's Carl Dahlstrom, but Oliver Bjorkstrand made a pinpoint pass from behind the net.

Atkinson completed a 2-on-1 break with Panarin with 38 seconds left in the period after Chicago's Connor Murphy lost the puck just inside the Columbus zone. It was Atkinson's team-high 32nd goal.

Chicago picked up the pace as the second period progressed, outshooting Columbus 20-9 in the frame and testing Bobrovsky in close.

Toews cut it to 3-2 on Chicago's final shot of the period with 34 seconds left. Gustafsson swooped in behind the Columbus net and found Toews alone at the right edge of the crease.

It was Toews' 27th goal. The captain has nine goals and seven assists in his last 10 games. Kane extended his team-record assist streak to 16 games on the play.

Panarin added his 24th on a deflection just 12 seconds into the third. From a faceoff, Seth Jones fired from the blue line. Panarin was turning in the slot and had his back to the play, but the shot caromed of the shaft of his stick and bounced past Ward.

"I was worried (Jones) was going to hit my soft spot," Panarin joked. "That's why I was trying to run away and it hit my stick."

Ward, who had won five in a row, blocked 25 shots.

After another goal for Atkinson was waived off following a video review for offside, Anderson made it 5-2 with 4:44 left when Ward juggled his shot from the right circle and the puck landed in the net.

NOTES: Chicago G Corey Crawford, who has been sidelined since Dec. 16 with his second concussion in two seasons, missed the game-day skate because of an illness. But he thinks he is close to returning. ... Columbus C Boone Jenner sat out with an undisclosed injury and F Brandon Dubinsky (hip) missed his sixth game after being placed on IR on Friday. ... Blue Jackets F Kole Sherwood, a native of New Albany, Ohio, made his NHL debut and became the first local player to skate for the team. The 22-year-old was recalled from Cleveland of the AHL on Friday. Tortorella downplayed Sherwood's hometown connection. "I don't care if he's from Mars," Tortorella said. "If he can play and add something to help us win, great." ... The announced United Center crowd of 22,196 was the Blackhawks' largest this season and their 486th straight sellout.