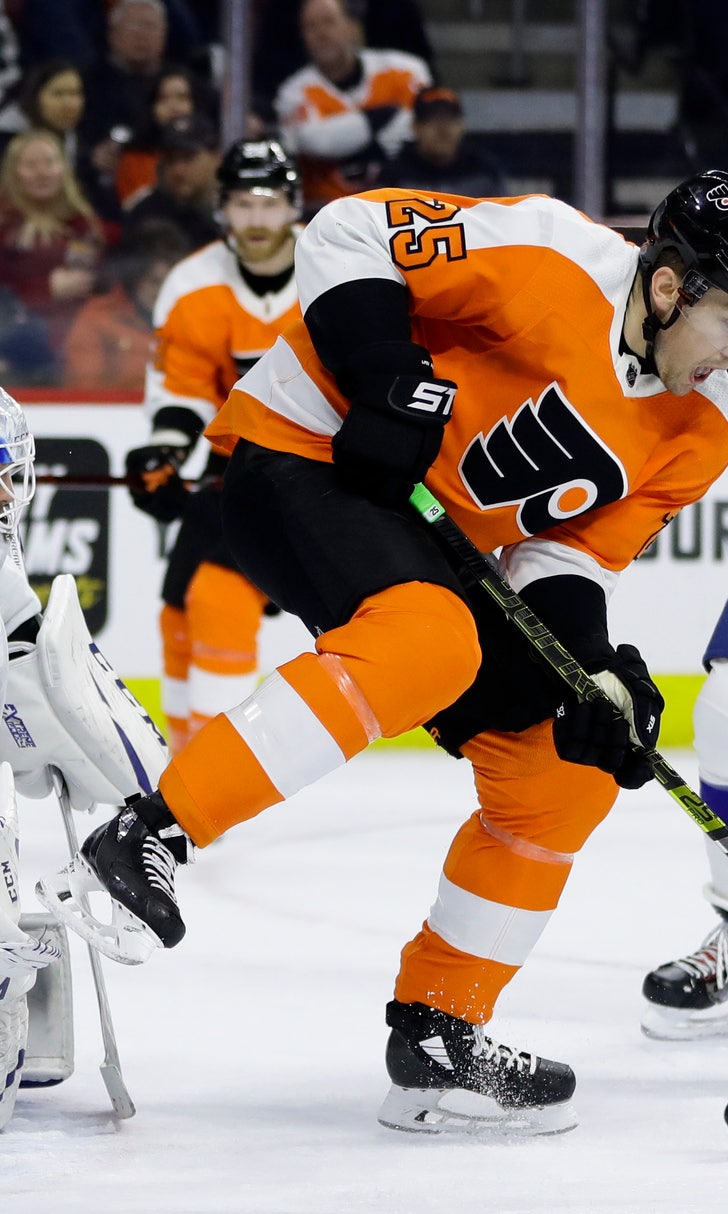 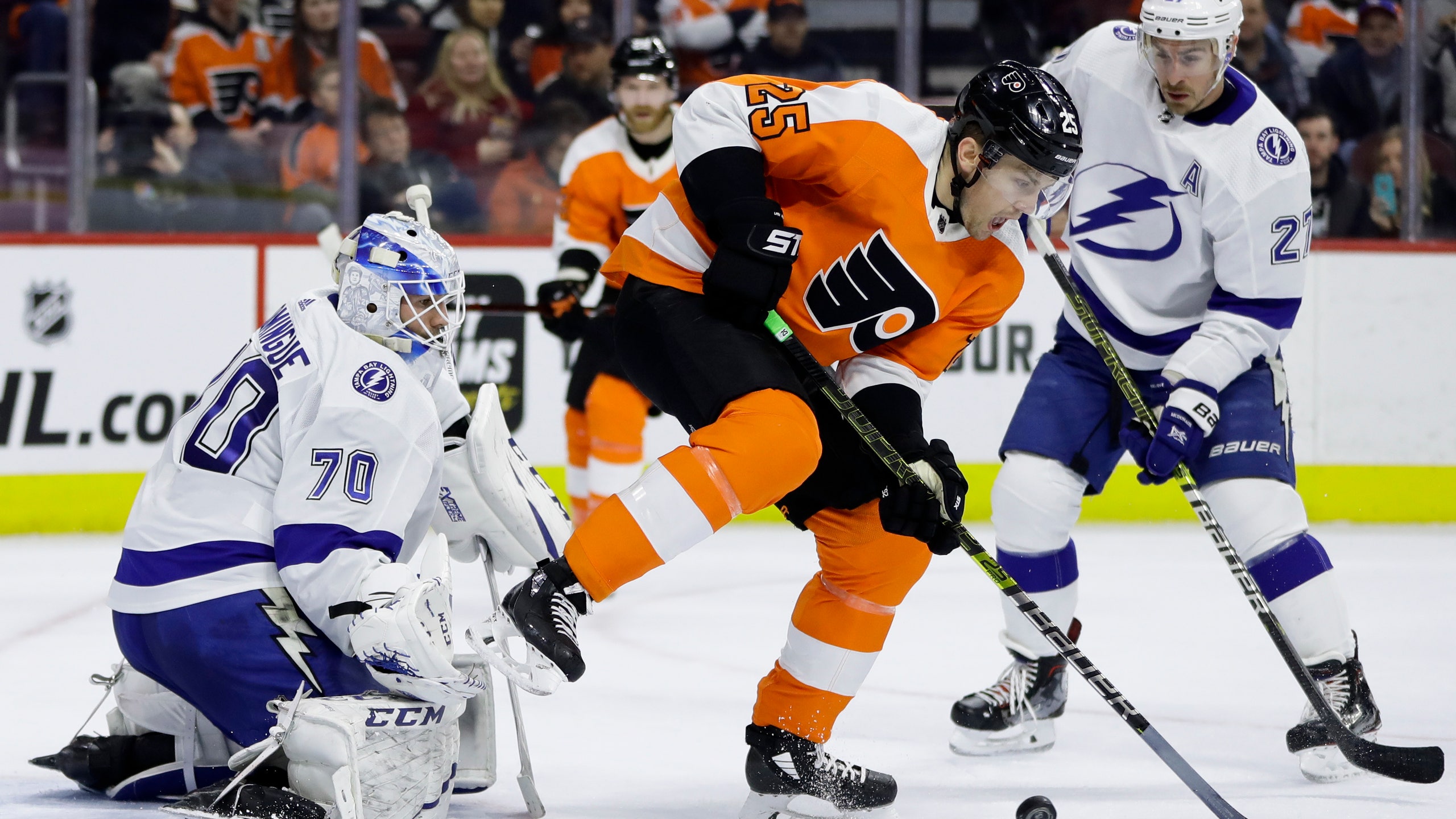 PHILADELPHIA (AP) — J.T. Miller had a goal and an assist, and the Tampa Bay Lightning used a fast start to win their seventh straight, beating the Philadelphia Flyers 5-2 on Tuesday night.

Alex Killorn, Mikhail Sergachev and Yanni Gourde also scored, and Ryan McDonagh added an empty-netter for Tampa Bay (46-11-4, 96 points), which entered 15 points ahead of Calgary for the most in the league. The Lightning were 16 points clear of Boston, the Eastern Conference's next-best team, beginning Tuesday.

Louis Domingue made 28 saves in place of Andrei Vasilevskiy, who rested after making 39 stops in the Lightning's 5-1 win at Columbus on Monday night. Domingue improved to 19-4.

Oskar Lindblom and Travis Konecny scored for Philadelphia, which lost for just the third time in the last 15 contests.

Jaden Schwartz and Colton Parayko also scored and Tyler Bozak had two assists for the Blues. Jordan Binnington made 29 saves to win his ninth straight, extending the longest winning streak in franchise history for a rookie goaltender.

DALLAS (AP) — Roman Josi scored the go-ahead goal with 12:25 to play and added an empty-netter to lift Nashville over Dallas.

Josi skated from behind the net into the slot, and his wrist shot hit defenseman Esa Lindell's skate and popped over goalie Anton Khudobin. Nashville won for the second time in six games to move within a point of Central Division leader Winnipeg.

Filip Forsberg tied the game at 3 with 1:44 left in the second period, 21 seconds after the Stars took their first lead with goals 26 seconds apart by Lindell on the power play and Tyler Seguin.

NEWARK, N.J. (AP) — Bryan Rust scored a tiebreaking goal midway through the second period and Pittsburgh continued its playoff push and avoided the embarrassment of being swept by lowly New Jersey.

Defenseman Chad Ruhwedel, Nick Bjugstad and Zach Aston-Reese also scored for Pittsburgh, which has won four of its last five in its bid to make the playoffs for the 13th straight year. The streak is the longest active playoff run in the NHL.

Matt Murray made 33 saves, including 15 in the third period, to help the Penguins salvage the final game in the four-game season series.

Jesper Bratt, Marcus Johansson and Miles Wood scored for the Devils, who had a two-game winning streak snapped. Keith Kinkaid had 24 saves in losing to the Penguins for the first time in four games this season.

Miller got his second win in two starts since returning from a knee injury that sidelined him for 24 games. His latest came two days after he set the all-time wins record for a U.S.-born goalie with a victory over Washington. He now has 376 for his career.

Devan Dubnyk finished with 20 saves in Minnesota's fifth straight loss. The Wild have been shut out in consecutive games for the first time all season and haven't scored in the last 156 minutes.

Connor Brickley also scored for the Rangers, who earned a split of a four-game road trip and handed the Hurricanes just their third loss this month. Henrik Lundqvist stopped 43 shots to get his 17th win of the season.

Jordan Martinook scored and Curtis McElhinney finished with 24 saves for Carolina, which had won six of its previous seven games — including its first road win over the Rangers since Oct. 2010. The victory on Feb. 8 ended a 16-game losing streak at New York, but the Rangers were able to return the favor on the Hurricanes' home ice.

The victory was Montreal's first since Feb. 4 and ended a four-game skid. Paul Byron and Max Domi also scored, and Carey Price made 31 saves.

SUNRISE, Fla. (AP) — Jonathan Huberdeau had two goals and an assist to lead Florida over Buffalo.

EDMONTON, Alberta (AP) — Vinnie Hinostroza scored in regulation and got the winner in the fourth round of the shootout to lift Arizona over short-handed Edmonton.

Josh Archibald also scored for the Coyotes, who have won four of their last six. Darcy Kuemper stopped 35 shots through overtime and then three of the four attempts in the tiebreaker.

Adam Larsson and Ryan Nugent-Hopkins had goals for Edmonton, which was without star forward Connor McDavid due to the flu. Mikko Koskinen had 33 saves as the Oilers lost their fifth straight and 11th in the last 12 (1-8-3).

Florida Panthers
share story
those were the latest stories
Want to see more?
View All Stories
Fox Sports™ and © 2021 Fox Media LLC and Fox Sports Interactive Media, LLC. All rights reserved. Use of this website (including any and all parts and components) constitutes your acceptance of these Terms of Use and Updated Privacy Policy. Advertising Choices. Do Not Sell my Personal Info