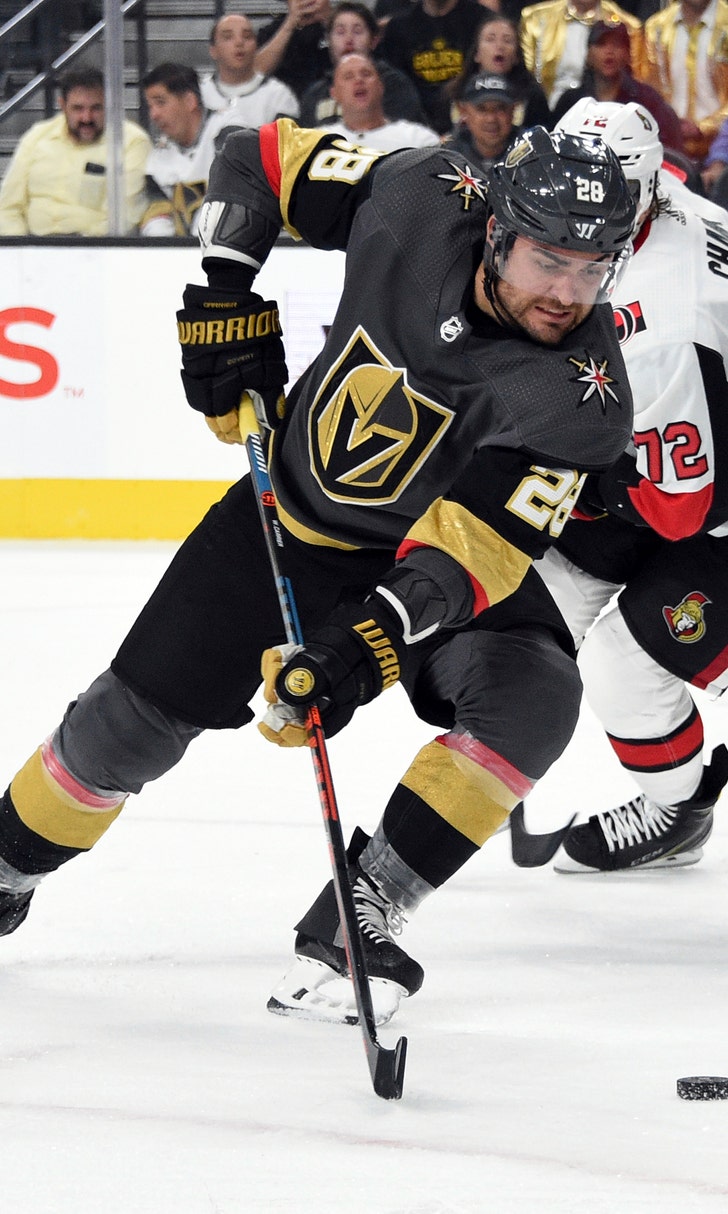 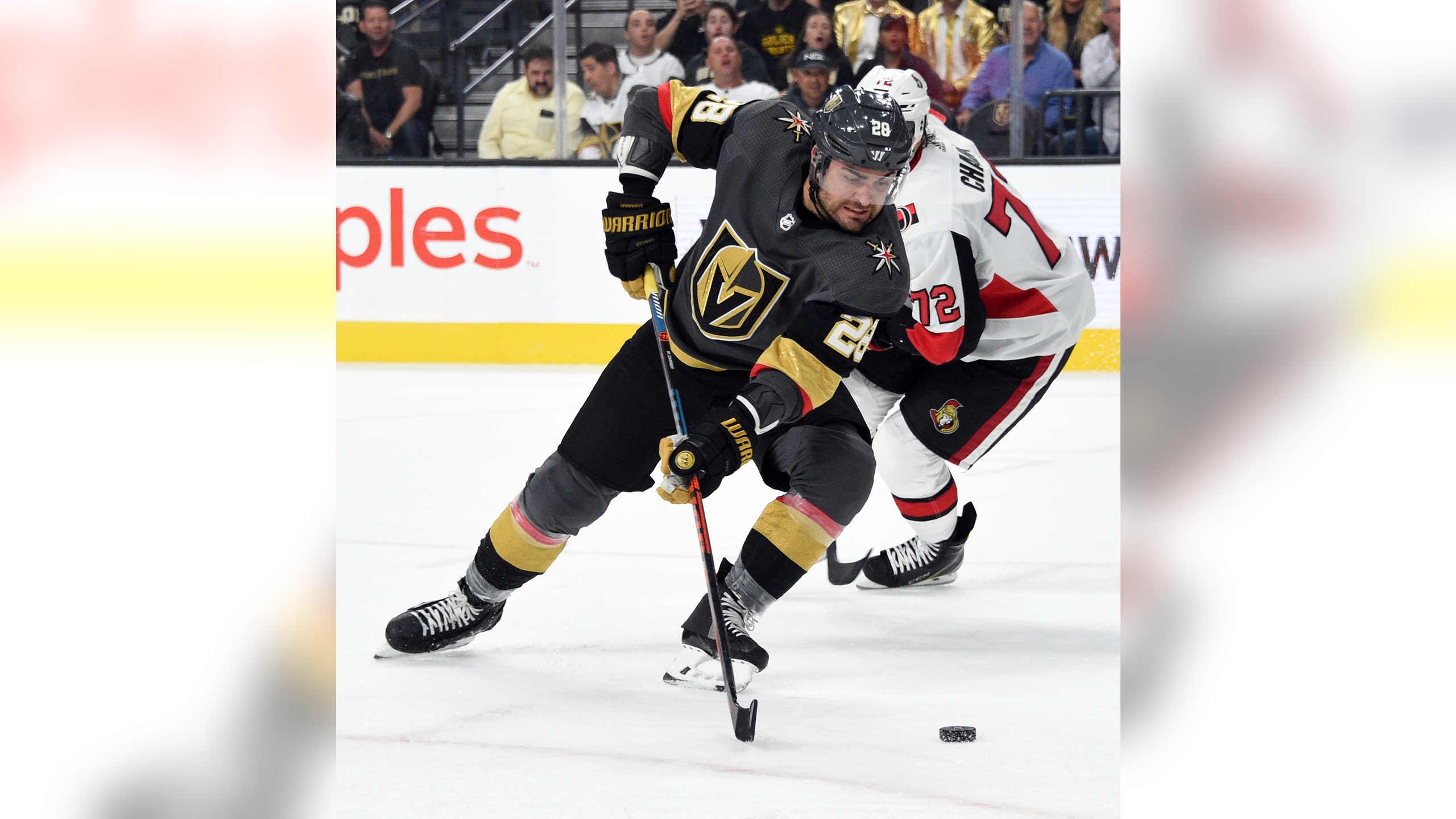 LAS VEGAS (AP) — Mark Stone stood at his locker, shook his head and gave a sigh of relief.

"I didn't want to lose that game," Stone said. "Being honest."

And that is why Stone was the first player onto the ice to hug teammate Jonathan Marchessault after he scored his first career shootout game-winning goal, lifting the Vegas Golden Knights past the Ottawa Senators 3-2.

"We wanted to get that win for Stoney," Marchessault said. "It's an emotional night when you face your old team for the first time and he's a big part of our group, he's our leader up front and it was great to see that he was so happy there."

Stone, who played 366 games for Ottawa, faced his former team for the first time. Stone was acquired from the Senators at the trade deadline in February for Oscar Lindberg, prospect Erik Brannstrom and a 2020 second-round pick.

"Seeing that logo on the other side was different. I wore that logo with a lot of pride, enjoyed playing for that team, for that city," Stone said. "It was weird, it really was. That being said, Vegas is the place I want to be. It was the only place I wanted to go. I've never been through anything like that. It was different, nerve-wracking at times, but happy to get that win."

Reilly Smith and Nick Holden scored for Vegas, while Stone notched the 200th assist of his career.

Vegas fired a franchise-record 54 shots on goal before needing the extra period to earn the two points.

Marc-Andre Fleury made 37 saves, as it marked the fourth straight game and sixth of eight the Golden Knights allowed an opponent to shoot 35 or more on goal.

"I'm always impressed with him," Stone said of Fleury. "I shoot at him every day. He's the hardest worker on our team, so that's kind of a trickle-down effect for us."

After being outshot 52-34 in regulation, the Senators outshot Vegas 5-2 in overtime, and it took several spectacular saves by Fleury to force the shootout.

Anders Nilsson, who lost his only previous start against Vegas by allowing five goals, was spectacular in just his second start in net this season, making 52 saves against the high-powered Golden Knights.

Smith said considering where the Senators are at two weeks into the season, now 1-5-0, and the fact Vegas (5-3-0) is one of the favorites in the Western Conference, he believes his team took a step forward in building confidence during a tough road trip.

The Senators, one of the least productive teams offensively this season with just 14 goals, struggled to find any sort of rhythm in their zone, and relied on Nilsson to hang around.

The Senators are now 0 for 21 on the power play and are the only team without a power-play goal this season.

Smith opened the scoring for the Golden Knights when he took a pass from Marchessault and backhanded a shot under Nilsson's pads 4:12 into the game.

The lead wouldn't last. Chabot sent a wrist shot past Fleury to tie the game 1-1.

Vegas went back on top later in the period when Holden scored his first goal of the season. On the power play, Holden's one-timer bounced off a stick and into the net, the goal that gave Stone his 200th assist.

After a scoreless second period, the Senators tied the game when Pageau smacked a rebound past Fleury's glove just 4:25 into the third period.

NOTES: Vegas forward Valentin Zykov was suspended 20 games earlier in the day, for violating the league's performance-enhancing substances, and was replaced in the lineup by Brandon Pirri. ... Golden Knights winger Max Pacioretty played in his 700th career NHL game. ... Vegas' Gerard Gallant coached in his 500th career game. ... Ottawa center Artem Anisimov, who was scratched Monday against Minnesota because of a lower-body injury, left practice early Wednesday and was scratched again. ... Attending the game was Seattle's GM Ron Francis and scout Ulf Samuelsson.

Ottawa: Continues a three-game trip at Arizona on Saturday.

Vegas: Begins a three-game trip at Pittsburgh on Saturday.