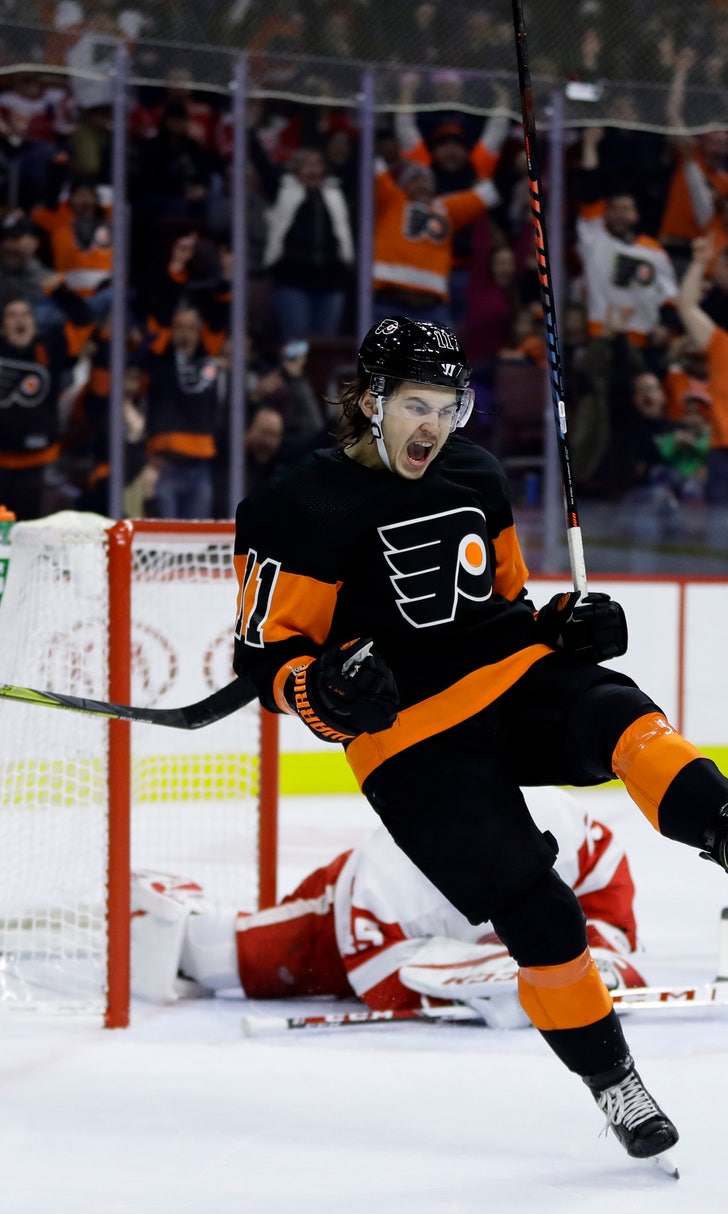 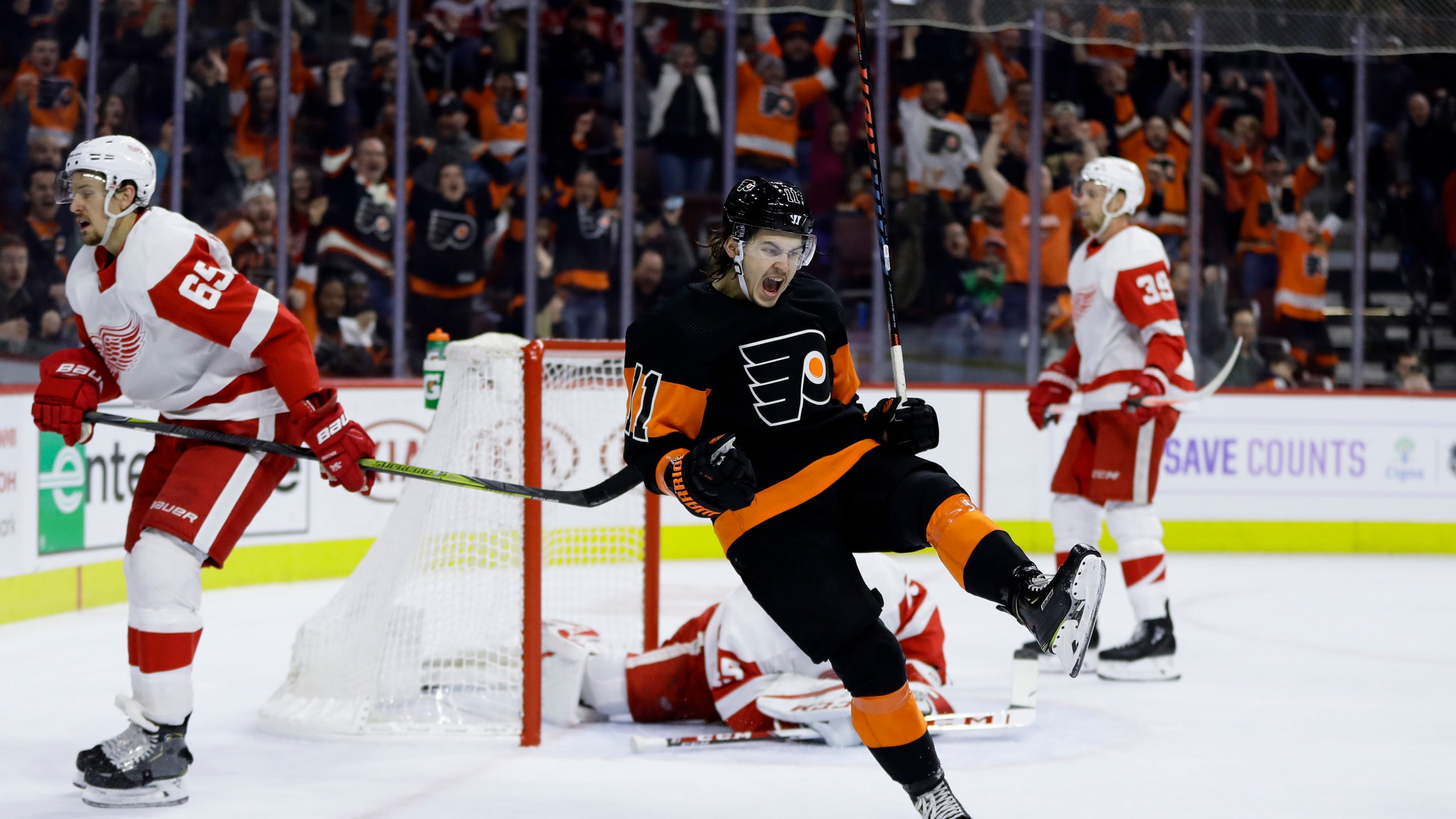 PHILADELPHIA (AP) — Travis Konecny and the Philadelphia Flyers were able to exhale after almost improbably coughing up two points.

Konecny scored his second goal of the game 1:27 into overtime and Philadelphia bounced back from squandering a big lead to beat the Detroit Red Wings 6-5 on Saturday.

"It feels good to get that one, especially when you have the thought of maybe losing a game that you should have," Konecny said.

The Flyers led 5-1 with 19 minutes left in the third period. The Red Wings tied it on Anthony Mantha's second goal of the game with seven seconds remaining in regulation.

"We definitely have to clean some things up," Konecny said. "Some of that stuff is not acceptable for a team to come back like that. . But we're just glad we came out on top of this."

Despite overcoming a four-goal lead in the third period, Detroit remained winless in Philadelphia for more than 20 years. The Flyers are 15-0-1 on home ice against the Red Wings since getting swept by them in the 1997 Stanley Cup Final.

Konecny sent Philadelphia to its 11th win in the last 13 with a wraparound tally in the 3-on-3 extra session. Sean Couturier put a shot toward the net and Jonathan Bernier's save went to Konecny, who skated around the back of the net and put a forehand shot inside the post as Bernier couldn't recover in time.

Asked about his message to the Flyers prior to overtime, Philadelphia interim coach Scott Gordon said, "Go get the second point we lost."

The game was the first of a home-and-home for the teams, who will meet again Sunday night in Detroit to wrap up their three-game season series.

Nolan Patrick had a goal and two assists, Scott Laughton and Shayne Gostisbehere each had a goal and an assist and Jakub Voracek scored for the Flyers, who began play eight points behind Pittsburgh for the last playoff spot in the Eastern Conference.

Tyler Bertuzzi had a goal and an assist in his return to the lineup, and Thomas Vanek and Gustav Nyquist also scored for Detroit.

"It goes to show that when we want to start playing that we can play at a high pace and then score goals," Bertuzzi said.

Mantha's stellar deflection of Mike Green's shot from the point went over Carter Hart's left shoulder and capped an improbable comeback for Detroit, which trailed by four when coach Jeff Blashill pulled goaltender Jimmy Howard for backup Bernier after the Flyers netted a pair of rebound tallies in the opening 1:24 of the third.

"The goalie switch always wakes us up," Mantha said. "It tells us that we're playing terrible."

It appeared that the Flyers had turned the game into a rout when Voracek and Patrick scored on rebounds early in the third.

But the Red Wings quickly responded to the goalie change by scoring twice in 44 seconds, first by Bertuzzi and then Vanek, to pull within 5-3. And Mantha's first goal, a deflection of Danny DeKeyser's shot from the point with 11:24 left in regulation, went through Hart's legs to make it a one-goal contest.

"We decided to play 18 minutes and we got four goals," Mantha said. "We've got good talent in here. I think we played the right way, we could win games."

Hart made 33 saves to win his ninth in the last 10. Hart faced Detroit in his NHL debut on Dec. 18, making 22 stops in a 3-2 victory that also marked the first game for Gordon.

Newly acquired goalie Cam Talbot was not with the Flyers, and Mike McKenna served as Hart's backup. Philadelphia traded goalie Anthony Stolarz to Edmonton for Talbot early Saturday morning. When he gets a start, Talbot would help Philadelphia set an NHL record by becoming the eighth starting goalie to appear in a game this season for the Flyers.

Notes: Detroit C Frans Nielsen (stomach virus) didn't play. . Bertuzzi had missed seven in a row with a concussion. . Voracek extended his point streak to nine consecutive games, with four goals and seven assists over the stretch. . Laughton had gone 26 games without a goal before scoring from close range 4:02 into the second. . Philadelphia has scored on the power play in four straight contests.

Travis Konecny
share story
those were the latest stories
Want to see more?
View All Stories
Fox Sports™ and © 2021 Fox Media LLC and Fox Sports Interactive Media, LLC. All rights reserved. Use of this website (including any and all parts and components) constitutes your acceptance of these Terms of Use and Updated Privacy Policy. Advertising Choices. Do Not Sell my Personal Info