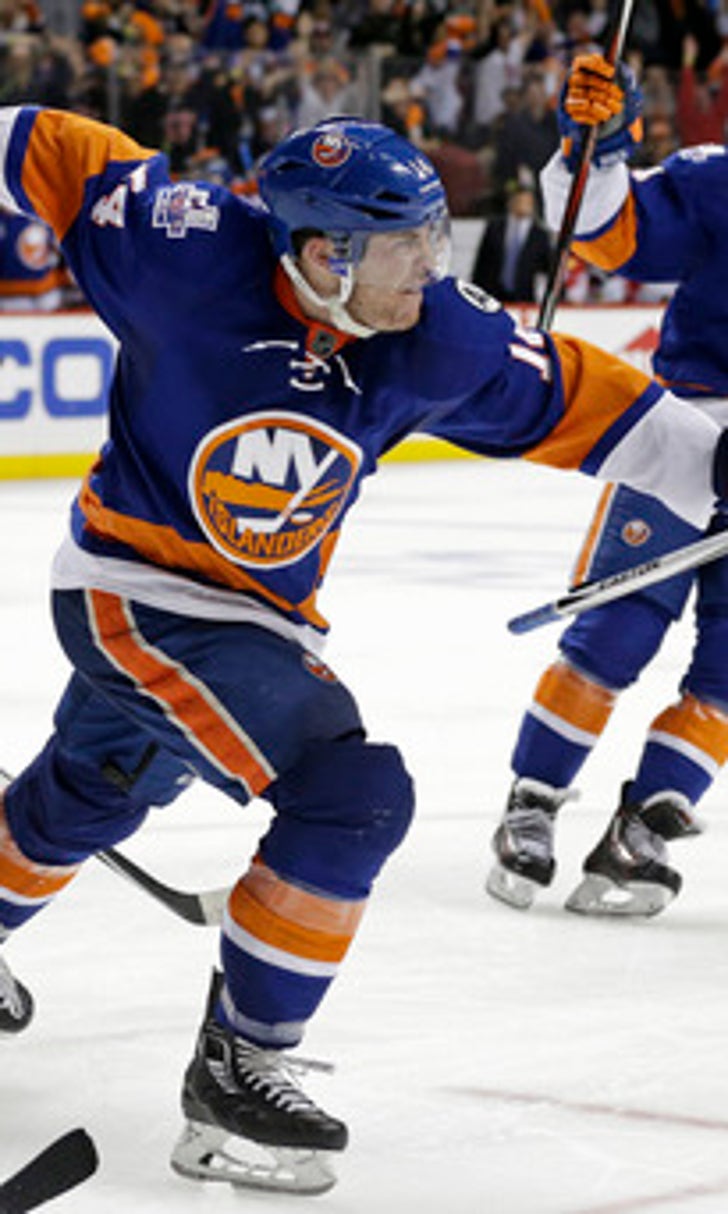 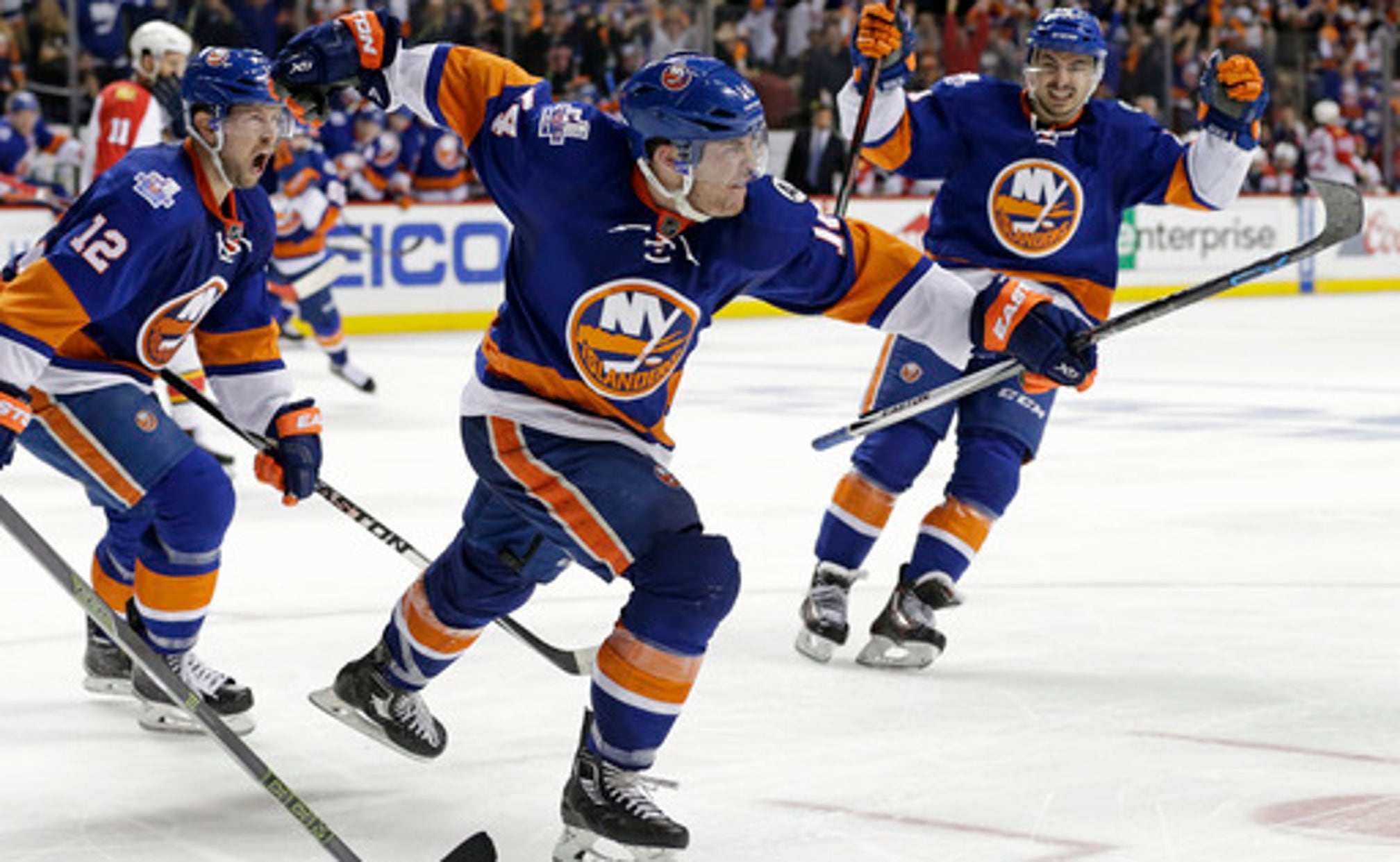 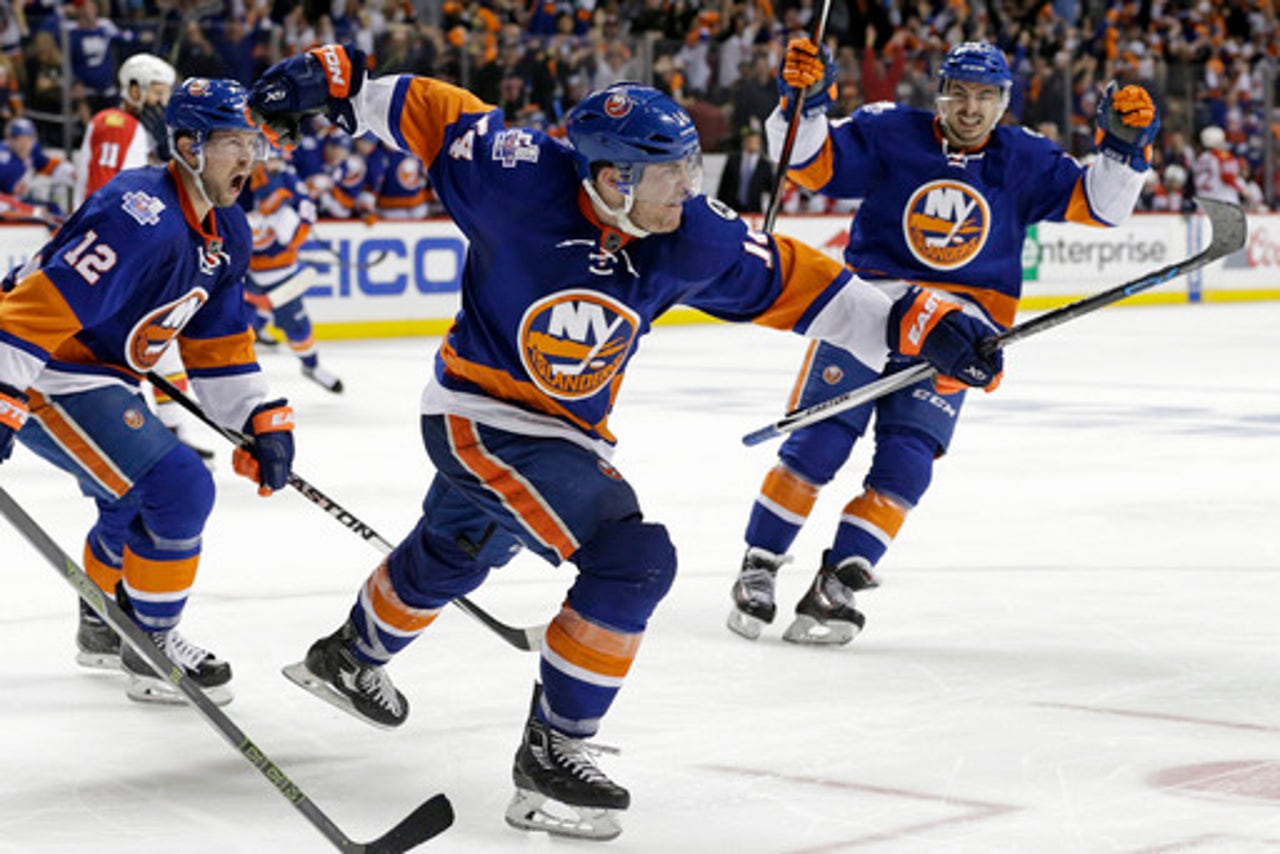 NEW YORK -- Thomas Hickey scored 12:31 into overtime to lift the Islanders to a 4-3 victory over the Florida Panthers on Sunday in Game 3 of their first-round series, giving New York a win in its first playoff game in Brooklyn.

Ryan Pulock, Shane Prince and Frans Nielsen scored for the Islanders, and Thomas Greiss had 36 saves. John Tavares and Kyle Okposo each had two assists.

Hickey scored on a one-timer off a pass from Brock Nelson from behind the net to give the Islanders a 2-1 lead in the best-of-seven series. Game 4 is also in Brooklyn on Wednesday night.

Reilly Smith had a goal and two assists, and Aleksander Barkov and Nick Bjustad also scored for the Panthers. Smith has four goals and four assists in the series. Roberto Luongo stopped 35 shots.

Florida had several chances in the first seven minutes of overtime, but couldn't get anything past Greiss.

The Panthers were leading 2-0 when Aaron Ekblad appeared to give them a three-goal advantage just past the 4-minute mark of the second period. However, that goal was overturned on a coach's challenge when video showed Florida was offside when it entered the zone, firing up the raucous Barclay Center crowd.

Penalties on Alex Petrovic and Jussi Jokinen 25 seconds apart gave the Islanders a 5-on-3 advantage 5:08 into the period. New York quickly took advantage as Pulock scored just 13 seconds later as he took a pass from Okposo and fired a slap shot past Luongo, sending the sellout crowd into a frenzy.

But the Panthers regained their two-goal lead just 15 seconds after the Islanders' power play ended as Bjugstad knocked in the rebound of a shot by Smith at 7:23.

However, Prince took a feed from Pulock and fired it up high on Luongo's blocker side to make it 3-2 with 8:12 remaining. Then, about 40 seconds after Dmitry Kulikov was whistled for clipping, Nielsen tied it as he took a pass from Tavares in the slot and backhanded it past Luongo with 3:05 left in the period.

After a tight first period that saw the Panthers take a 1-0 lead, the teams combined for five goals -- and the one that was waved off -- in the second period.

Barkov made it 2-0 just 1:11 into the second period. Smith's shot from the right side was wide right, but the rebound came off the end boards to Barkov on the left side and he knocked in the rebound for his first goal of the postseason.

Smith got the Panthers on the scoreboard at 2:25 of the first period. Michael Matheson sent the puck to Petrovic on the right side and Petrovic fired a shot at the net. The rebound bounced to Smith at the left side and he backhanded the puck over a diving Greiss' stick for his fourth goal of the series.

Smith, who tied Dave Lowry for the franchise record with goals in three straight playoff games, nearly scored again in the first but his backhand attempt hit the crossbar a little more than 7 1/2 minutes in.

NOTES: Florida lost its previous two overtime playoff games, dropping Games 6 and 7 of the first round to New Jersey in 2012, the latter in two extra periods. ... Panthers coach Gerard Gallant said injured C Vincent Trochek is `doing real well' and will work out on the ice Monday. Gallant expects him back before the end of the series. "When the doctors and the trainers tell me he's ready to practice (with the team) then he'll practice. I know he's skated pretty well for a couple of times but by himself." ... Florida's Jaromir Jagr has not scored a goal in his last 34 playoff games. ... Panthers D Brian Campbell played in his 100th career playoff game. ... Tavares now has two goals and four assists in the series, and nine goals and 11 points in his last 13 games. ... Okposo has two goals and nine assists in his last seven games. ... Greiss had played three games in four days once this season -- Dec. 31 to Jan. 2. The Islanders won two of those three games.