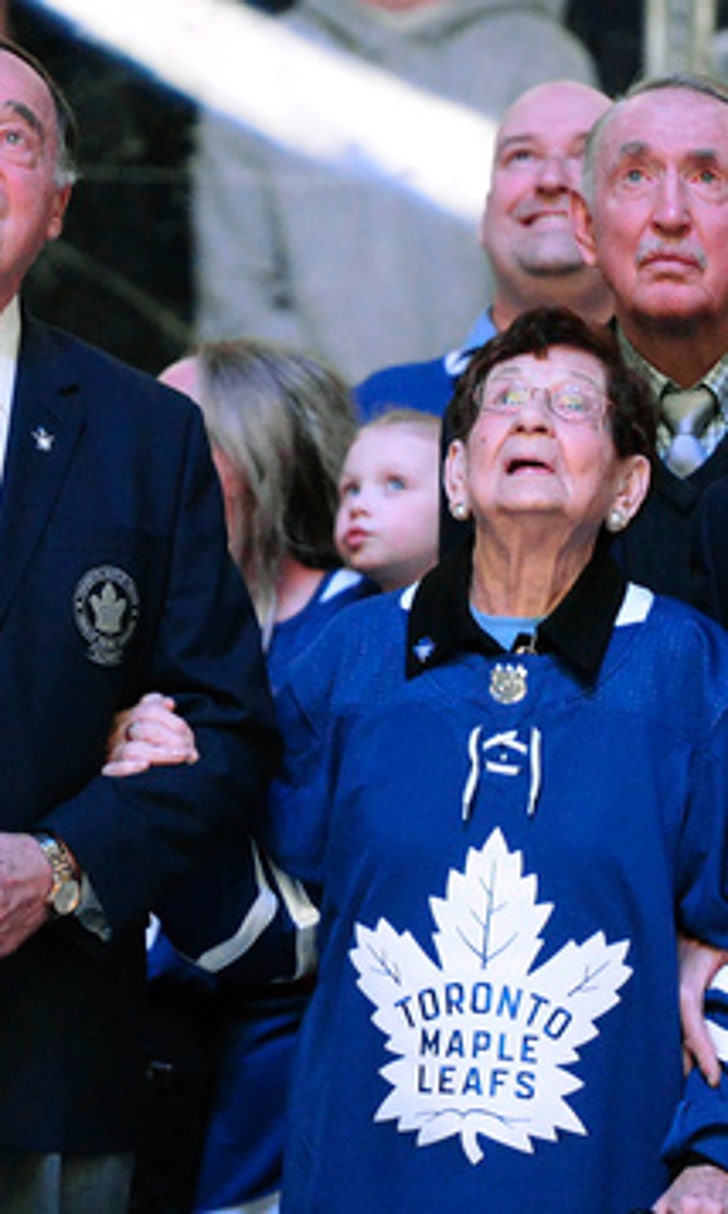 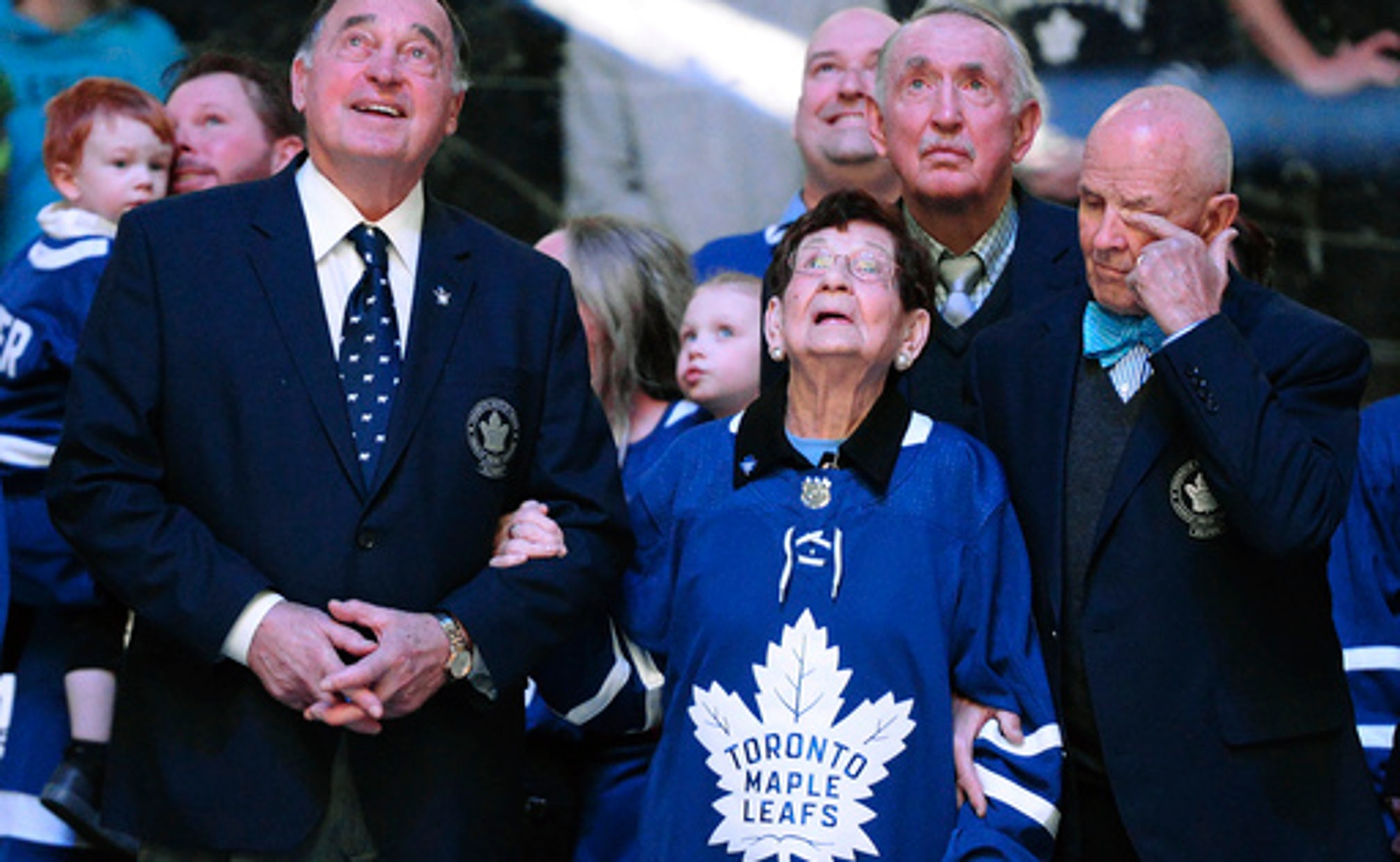 TORONTO (AP) Fans and a Who's Who of hockey remembered Johnny Bower as a great goaltender and a better man.

NHL Commissioner Gary Bettman and Hall of Famers Yvan Cournoyer, Red Kelly, Frank Mahovlich, Darryl Sittler and Doug Gilmour were just some of the hockey elite on hand Wednesday for what was billed as a celebration of the legendary goalie who died Dec. 26 at the age of 93 after a bout of pneumonia.

Coach Mike Babcock and the entire current Toronto lineup watched from the Air Canada Centre floor. Four generations of Bowers, including Nancy, Johnny's wife of 69 years, were front and center.

They heard stories about a family man who loved to laugh - especially at himself - and a humble guy who knew the value of a buck, doted on animals and always worked tirelessly for others.

A Canadian who lied about his age so he could enlist in World War II. A booster of female hockey. An honorary member of the Union of Ontario Indians with the name of ''Johnny With a Heart as Big as an Eagle's Wingspan Bower.''

A 5-foot-9 man with a huge heart who became synonymous with the Maple Leafs after a winding 13-year journey to becoming an NHL regular. Bower was 34 before he was Toronto's starting goalie.

In 12 years, he built a Hall of Fame career that include two Vezina Trophies and four Stanley Cups before he retired at the age of 45 after just one game in the 1969-70 season.

''His road to the Maple Leafs and the four Cups was much bumpier, much harder and much longer than many of us,'' teammate Dave Keon said. ''And yet, he became the centerpiece of our team. Winning the Cup takes heart, but John was our soul.''

A blue and white casket with the Maple Leaf logo stood in front of the dais. Bower's banner, which normally hangs in the rafters, was displayed behind the podium between the banners denoting the four Stanley Cups he won in the 1960s. Team members wore buttons with ''JB'' etched on the Leafs logo.

''Generous, soft-spoken, warm and welcoming. I'm sure Johnny had an ego but he didn't show it. There was no entitlement in Johnny Bower,'' Shanahan said.

Keon reminded listeners that prior to Bobby Baun scoring his storied overtime winner on a broken ankle in Game 6 of the 1963-64 Stanley Cup final, Bower had made a key save early in the third period to keep it a one-goal game. Toronto tied it and then won on Baun's goal.

''In sports as in life everyone remembers the heroic moment, in this case an overtime goal,'' Keon said. ''But only teammates remember the save that got us to overtime. That save as much as the goal, if not more, brought us back to Toronto where John shut out the Wings 4-0 to win our third Cup in a row.''

Teammates Ron Ellis and Mahovlich also spoke at the memorial.

Immediately prior to the event, current Leafs center Tyler Bozak said Bower represented ''what a Maple Leaf is'' and talked of how he used to quiz him about how he played without a mask night after night.

''He'd act like it was nothing. That's the crazy part about it,'' he recalled with a laugh. ''None of us could even come close to comparing to anything that he went through as a player.''

Morgan Rielly recalled the care with which Bower use to sign autographs, unlike other players who might cut corners

''He took time for every person, for every kid, every fan,'' the 23-year-old defenseman said. ''He made sure they got what they were looking for.''

Former captain Darryl Sittler recalled how competitive Bower was, even when retired, when he dressed for practice. ''He didn't want a puck in the back of his net,'' he said.

Keon also recalled one day after practice when his 10-year-old son took shots on Bower, who let the first puck in but then stopped the rest.

''I let him have one Davey, because he's your son,'' Keon said Bower told him later. ''But one was all he was going to get.''

Bower, who became known as the China Wall, was happily playing in the minors in Cleveland when he was picked up by Toronto almost 50 years ago. He said he only showed up to avoid being suspended for not reporting.

Elected to the Hall of Fame in 1976, Bower's No. 1 was raised to the rafters in Maple Leafs Gardens in 1995 and permanently retired in 2016 when he was voted the seventh best Leaf of all time in the franchise's centennial season.