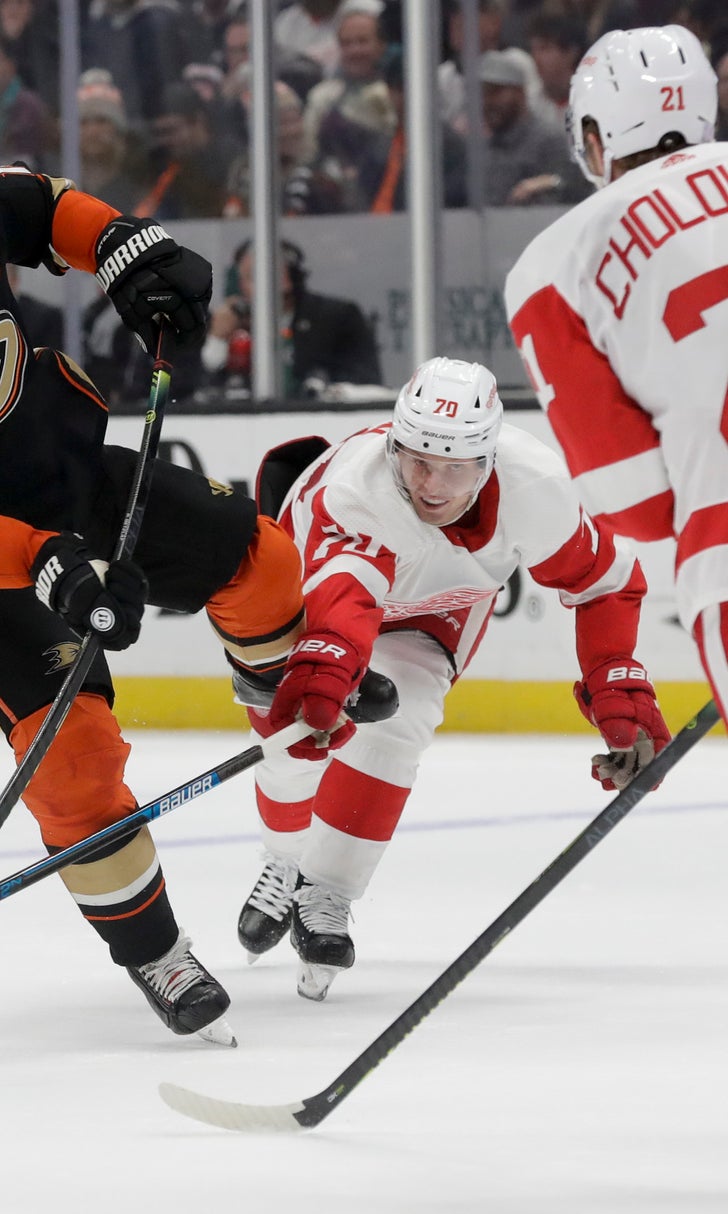 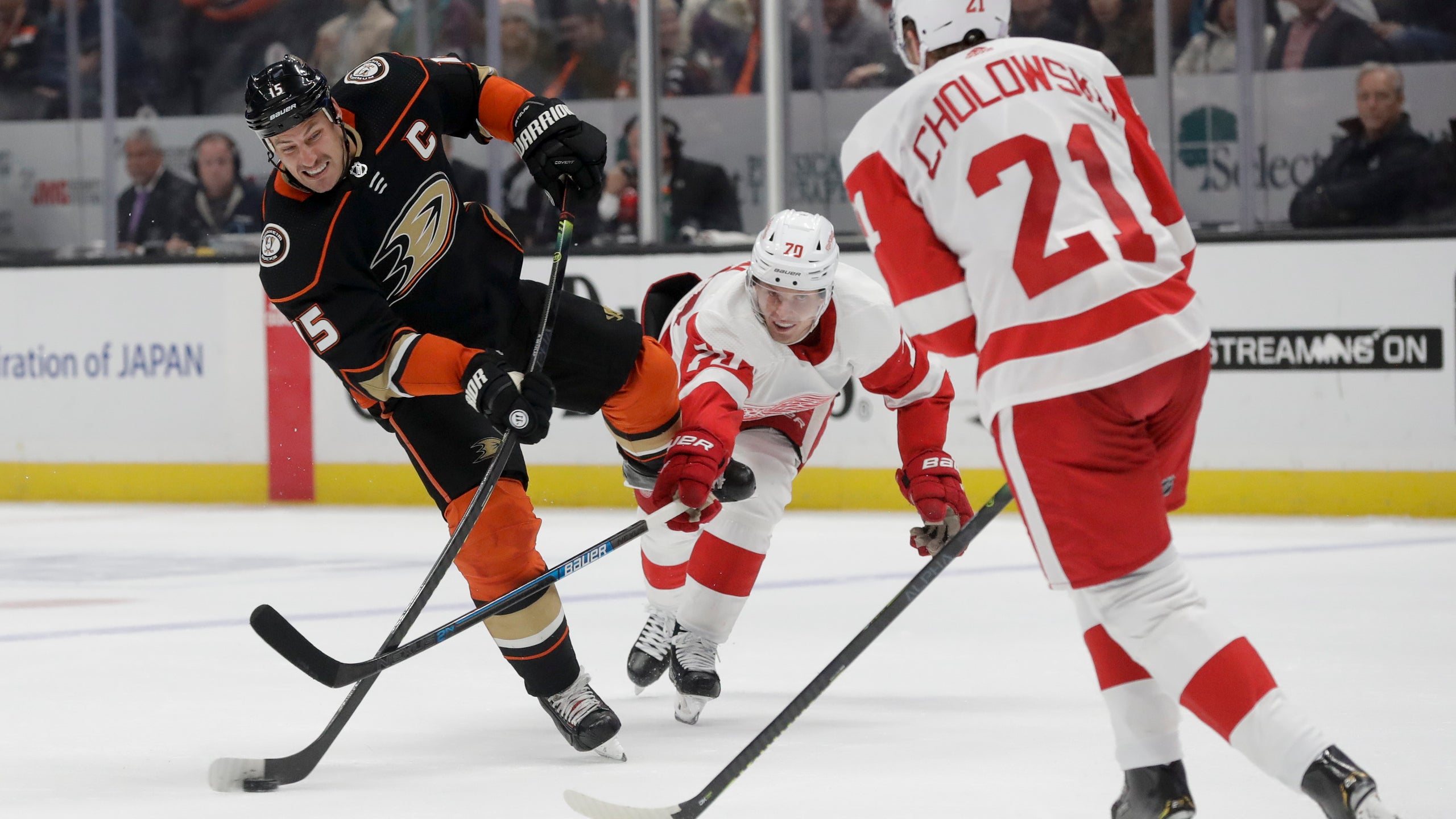 ANAHEIM, Calif. (AP) — The Detroit Red Wings are clawing back from a rough start to the season with an emphasis on tenacity and a renewed attention to consistency.

A couple of extraordinarily poorly timed penalties by Anaheim were more responsible for their latest win.

Dylan Larkin scored the tying goal during a 6-on-3 advantage with 37 seconds left in regulation, and Dennis Cholowski scored with 2:56 on the clock in overtime to send the Red Wings to their third straight victory, 4-3 over the Ducks on Tuesday night.

Detroit has its first three-game winning streak this season after winning for just the fourth time in 16 games, but the Wings had to capitalize on a pair of mistakes by the Ducks to keep it going at Honda Center.

"There was a tough stretch there where we didn't like the way we were playing, but we kept working hard," Larkin said. "I think you see our confidence coming through in this win by coming from behind."

After Ducks defensemen Brendan Guhle and Korbinian Holzer took penalties 21 seconds apart in the waning moments of regulation, Larkin scored from a sharp angle while the Red Wings had three extra skaters on the ice with their goalie pulled.

Cholowski then got his second goal of the season on a long shot past Ryan Miller, who made 32 saves for Anaheim.

Filip Hronek and Andreas Athanasiou scored in the second period for the Red Wings, and Jonathan Bernier stopped 24 shots against his former team. Detroit's rebuilding project has stalled at times in recent years, but coach Jeff Blashill sees progress.

"Winning is important because of your confidence, but we've just got to concentrate on trying to make sure we do things right," Blashill said. "It was good for our guys to dig in."

Jakob Silfverberg, Josh Mahura and Cam Fowler scored in the second period for the Ducks, who fell to 2-2-2 on their seven-game homestand.

Ondrej Kase and Adam Henrique had two assists apiece, but Anaheim lost for the first time in seven games this season when scoring at least three goals.

Anaheim has dropped four straight overall despite earning a point in two of the defeats, halting the momentum from its strong start to the season. The Ducks have been mediocre penalty killers this season, and a three-man disadvantage was too much to overcome.

"It's an extremely hard, hard position to be in," coach Dallas Eakins said. "It's hard enough to go down six (men to) four, but that's a tough one to get out of. You do a lot of good things, but you're left with that result."

After a scoreless first period, Silfverberg and Mahura scored 29 seconds apart for Anaheim in the opening minute of the second. Silfverberg hacked at a loose puck underneath Bernier to get his eighth goal of the season, and Mahura put a long shot past a screen.

"We score some good goals, but we also make some individual plays that end up costing us at unfortunate times," Silfverberg said. "But we are doing some positive things, so we've got to make sure we take those with us."

Hronek connected for his first goal in seven games, but Fowler answered with a slick shot off a cross-ice pass from Ryan Getzlaf. Athanasiou scored late in the second with a slick deflection of Valtteri Filppula's shot.

NOTES: Red Wings D Patrik Nemeth sat out for the first time all season due to an illness. Alex Biega made his sixth appearance of the season in Nemeth's spot. ... F Justin Abdelkader sat out for the first time since sustaining a mid-body injury that will keep him out for three weeks. Givani Smith returned from the minors and fought Anaheim's Nic Deslauriers in the first period. ... Holzer prevented a goal from Anthony Mantha by getting his stick in front of Mantha's shot at a wide-open net in the second period. ... Guhle made his first appearance for the Ducks since Oct. 27. Michael Del Zotto was scratched to make room. ... Henrique's two assists matched his career high. He has hit the mark 25 times.