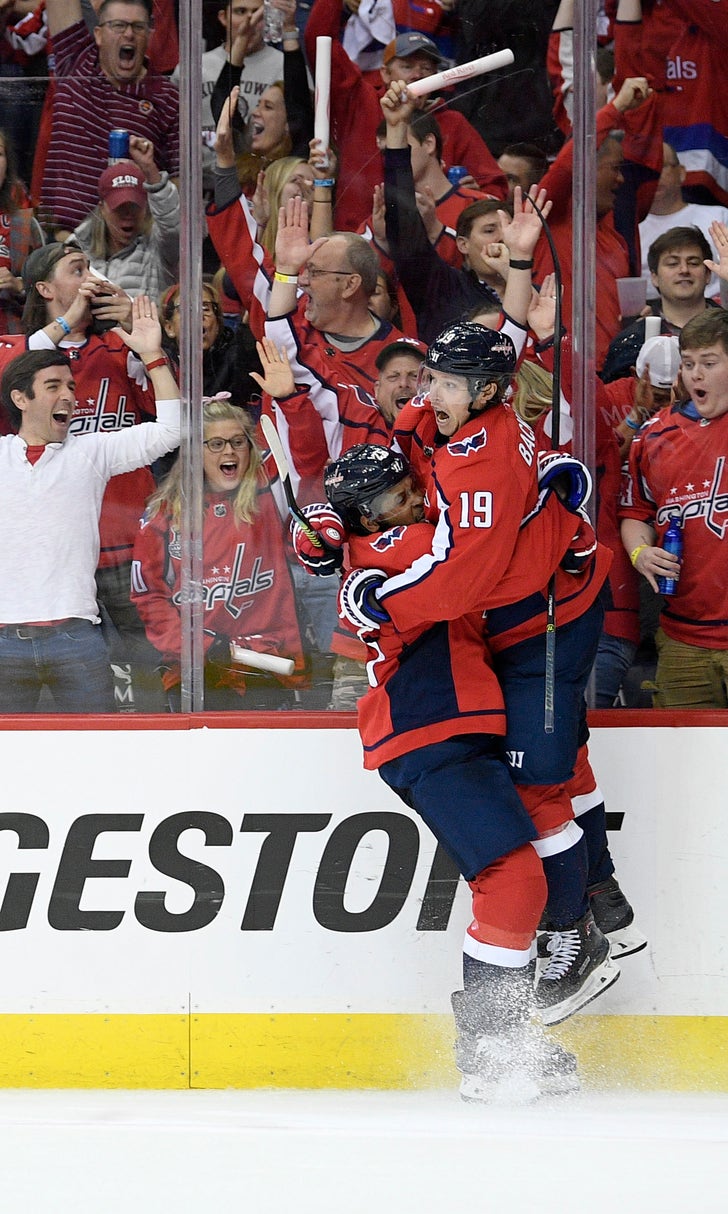 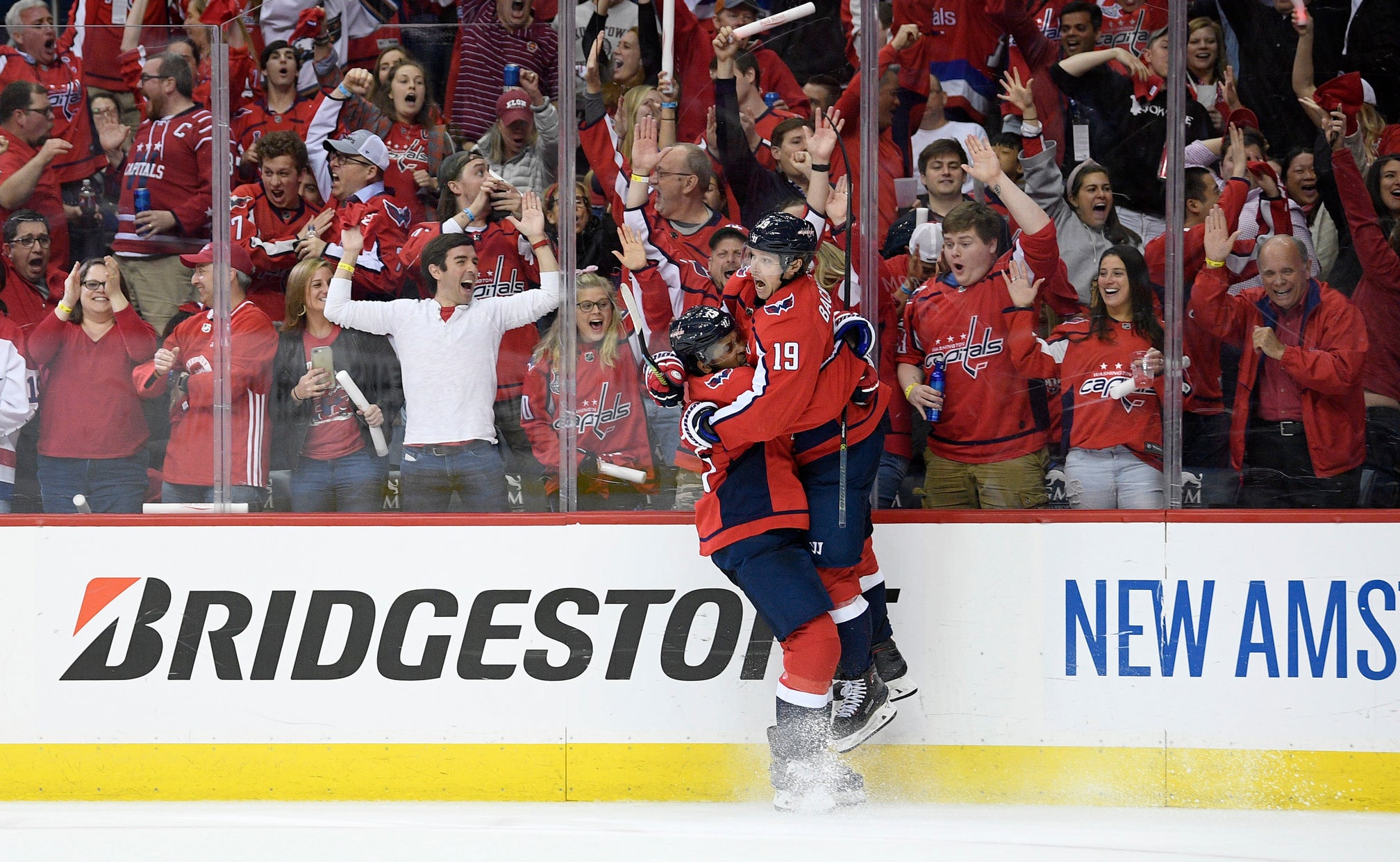 WASHINGTON (AP) — So much went right for the Washington Capitals that the chants from the crowd changed by the shift.

Oh, and there were those chants, too as the defending Stanley Cup champions blew out the Carolina Hurricanes 6-0 in Game 5 on Saturday night to take a 3-2 series lead and move one victory away from advancing to the second round.

In their first game since Oshie was knocked out indefinitely with an upper-body injury, the Capitals got two goals from Backstrom, power-play goals from Alex Ovechkin and Tom Wilson and secondary scoring in the form of a goal by Brett Connolly and a successful penalty shot by Nic Dowd to make a statement that they were back after laying an egg in two road losses that evened the series.

"That was a pretty great response," Backstrom said after matching his 2018 playoff total with five goals through five games in this first round. "We weren't satisfied with the games in Carolina. Tonight we played some Caps hockey, I thought. Everyone bought in to everything, we worked together and it paid off."

Ovechkin assisted on Backstrom's second goal and Connolly's first of the playoffs to again lead the way in a postseason win. The reigning playoff MVP has three goals and four assists so far in the series and is hurting the Hurricanes with more than just his patented shot.

Backstrom, who is known more for his passing, had five goals in 20 games during the Capitals' Cup run a year ago that included missing four games with two fractures in his right pointer finger. He and Ovechkin were two of the best players on the ice Saturday with their team in a precarious spot.

"Obviously they got on the point sheet, but their play away from the puck, on the forecheck, supporting each other, they're real tough to play against when they play like that," said Holtby, who set a franchise record with his seventh playoff shutout. "I thought they've been doing a great job all playoffs, too. You can tell that they want to win, and the rest of the team will follow."

There were more leaders than followers in this rout, and that included penalty killers who salted away all five Carolina power plays. Three successful penalty kills in the second period of what was then a one-goal game helped the Capitals blow the game open.

"That was a game-changer for us," said Backstrom, who made it 2-0 just 19 seconds after the final penalty kill in that stretch expired. "Kill 'em off and then we got going after that. You need that in games like this."

Hurricanes goaltender Petr Mrazek was hung out to dry in allowing six goals on 28 shots, and their power play came up empty when even a few scoring chances would've built some momentum and couldn't match Washington's high-powered unit.

"They scored a couple power-play goals, we stunk it up on ours," Carolina captain Justin Williams said.

As much of a complete effort as it was for the Capitals, it was that much of a missed opportunity for the upstart Hurricanes, who looked frazzled at times after dominating long stretches of the past two games. For the fifth time in five games, the team that scored first — and the home team — won, something the Hurricanes hope to continue back at home facing elimination.

"We've just got to make sure at home we get that first one and get our crowd into it," said defenseman Jaccob Slavin, who was on the ice for five Capitals goals. "It's do or die now."

After showing what they could do without Oshie and with Smith-Pelly back from a two-month stint in the minors for salary-cap reasons, the Capitals are another performance like this from facing former coach Barry Trotz and the New York Islanders in the second round. But before tackling that, they have to finish off the upstart Hurricanes, who have shown they can respond just as well despite being playoff newcomers.

"It's a win," Holbty said. "We regroup, we know they're going to come harder next game and we'll focus on that."

NOTES: Dowd's penalty shot goal was the first in franchise playoff history. ... The Capitals improved to 11-3 this season without Oshie. ... Carolina F Aleksi Saarela became the first player in Hurricanes/Hartford Whalers franchise history to make his Stanley Cup playoff debut before appearing in a regular-season game. Saarela replaced Jordan Martinook (lower-body injury) in the lineup. ... LW Andrei Svechnikov took part in the Hurricanes' morning skate and said he hopes to play in Game 6 after being concussed in a fight with Ovechkin in Game 3. ... F Micheal Ferland missed his second consecutive game with an upper-body injury.

The Hurricanes could set another arena attendance record Monday when they look to stave off elimination in Game 6.