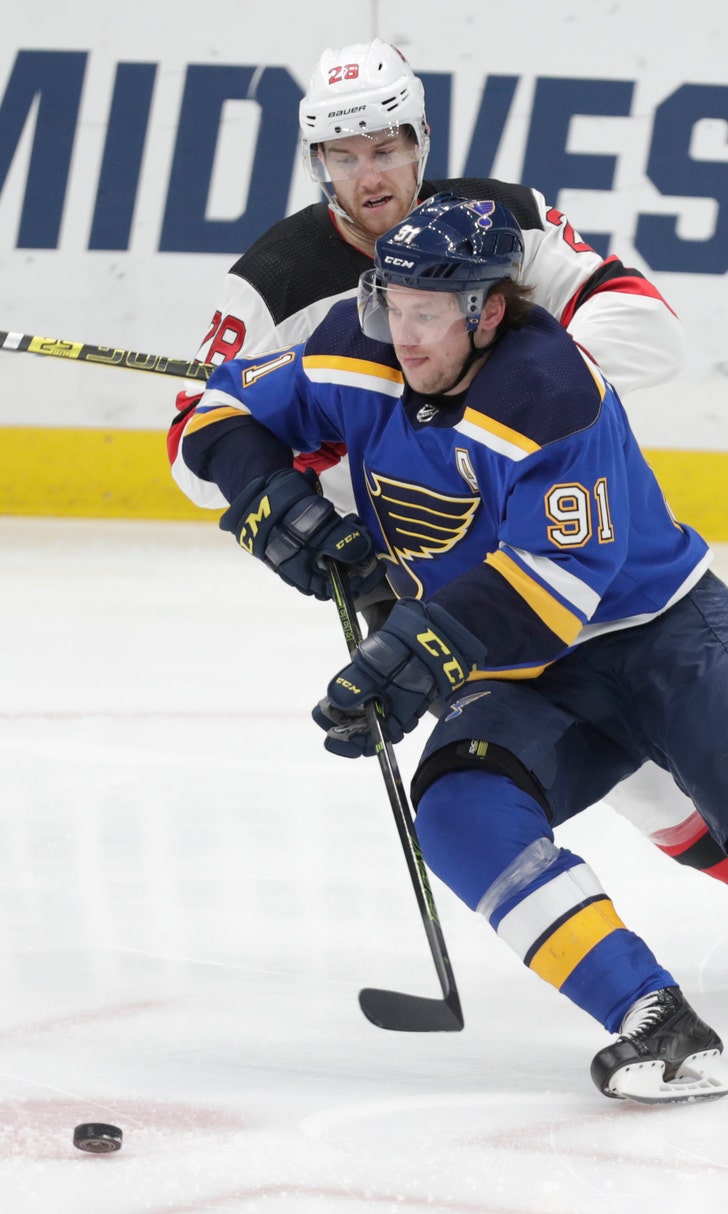 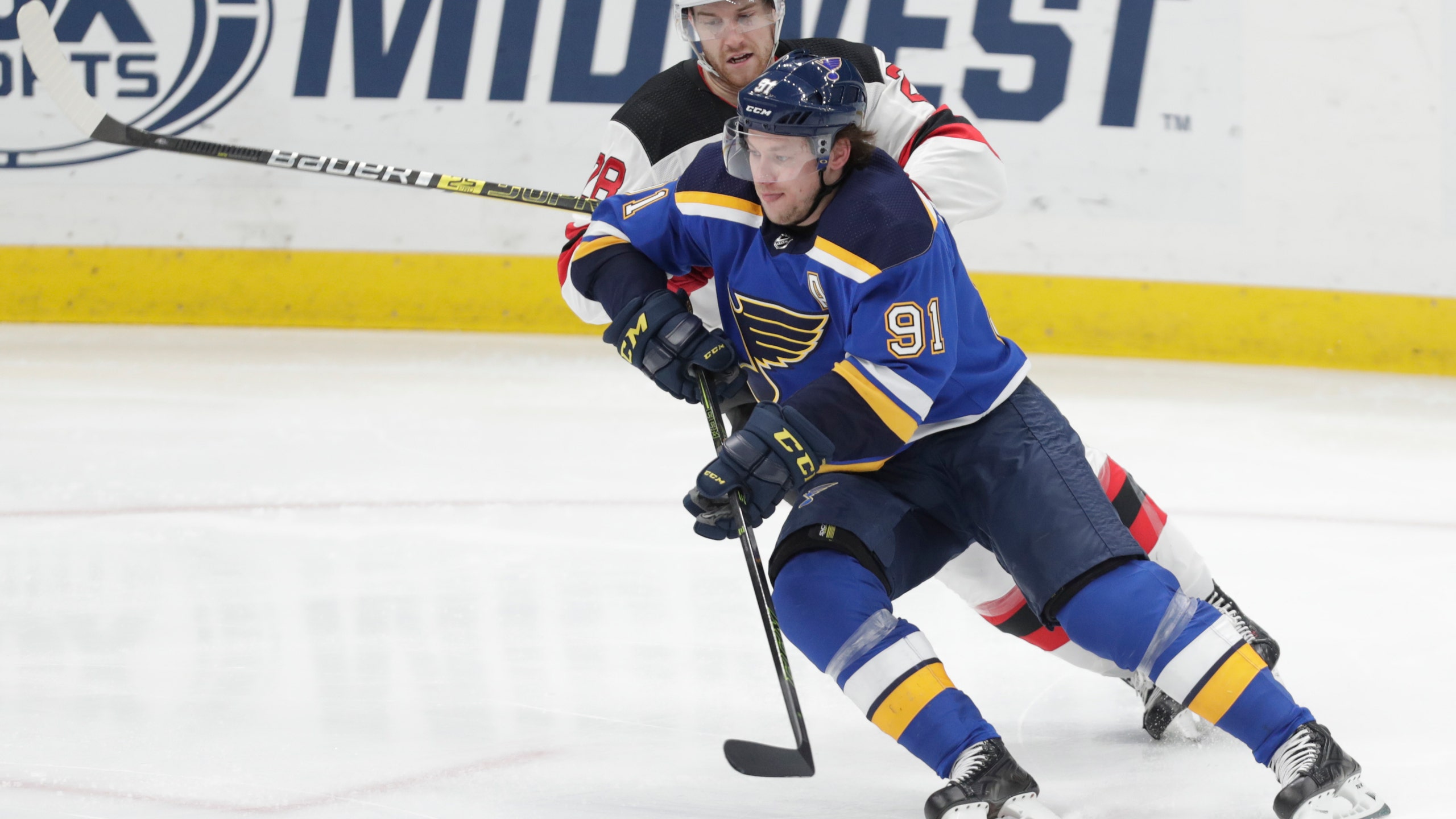 ST. LOUIS (AP) — Jaden Schwartz knew he would score again. He just didn't expect it would take so long.

Schwartz got his first goal in 23 games — a span of 73 shots — on a night when no St. Louis player had trouble finding the net.

Alex Pietrangelo and Ivan Barbashev each scored twice as the Blues won their seventh straight game, blowing out the New Jersey Devils 8-3 on Tuesday night.

Ryan O'Reilly, Mackenzie MacEachern and Tyler Bozak also scored for the Blues, whose eight goals were a season high. St. Louis' winning streak is its longest since Jan. 17-Feb. 5, 2015, when it also had seven consecutive victories.

"It was nice to see it go in," Schwartz said. "Hopefully, more of those to come. You try to stay as confident as you can when you're not scoring. You try to do anything to help the team.

"There's a lot of guys in here playing good offensive hockey. Obviously when you're winning, it makes things a lot easier. I try to take pride in the little things and help the team win any way I can."

Schwartz's goal was popular in the St. Louis locker room.

"He's been getting a lot of chances," coach Craig Berube said. "It was quite stretch for him but tonight it went in. He plays well. Even he's not scoring, he does things well. Eventually they go in. He's a hard-working hockey player."

Rookie Jordan Binnington made 20 saves to win his sixth straight start, becoming the second goalie in Blues history with a winning streak of at least six games. Brent Johnson twice won seven in a row in 2000 and 2001. Binnington is 10-1-1 since he made his first career start on Jan. 7.

Pavel Zacha, Kyle Palmieri and Mirco Mueller scored for the Devils, who have lost 10 straight to St. Louis. In the last 16 meetings between the teams, the Blues are 14-2-0.

Keith Kinkaid allowed all eight St. Louis goals, a career high, on 39 shots, and fell to 0-4-1 against the Blues.

"We just got out-battled in every facet of the game," Kinkaid said. "To be honest, I felt good and then the next thing you know, the puck hits off of something and winds up in the back of your net and that's just the way tonight goes. It happens. Just got to refresh. It's one game."

The Blues scored three goals on 20 shots in the first period to take a 3-1 lead.

Pietrangelo scored at 5:08 on a wrist shot from the left faceoff circle. The puck hit Jesper Bratt's stick and deflected in.

"The big thing was to get up early on them," Pietrangelo said. "We just took off. It was one of those nights where things were going in. We got the bounces."

The Blues went ahead 2-0 93 seconds later. Kinkaid cleared the puck from behind the net, but his pass went directly to the Blues' Robert Thomas, whose shot hit the post. The rebound came to Barbashev, who scored from just outside the crease.

Schwartz appeared to score again early in the second period, but the goal was disallowed because of goalie interference when Schwartz slid into Kinkaid.

The Blues got three more goals in the second period anyway. O'Reilly scored his 21st of the season 30 seconds in on a wrist shot from the top of the slot. MacEachern scored on a breakaway on a pass from Pietrangelo at 6:11. Bozak made it 6-1 when he scored at 15:20.

Each team scored twice in the third period, including Pietrangelo's and Barbashev's second goals. Barbashev's was short-handed.

"This is one game. We've got another game two days from now," Devils coach John Hynes said. "We need to make sure we're working on the things that we weren't good at tonight, which is a lot of things, and we've got to be better against Chicago."

NOTES: Blues F Pat Maroon went past 500 career penalty minutes when he was given an unsportsmanlike conduct with 2 seconds left in the second period. ... St. Louis improved to 11-2-1 in its last 14 games. ... The Devils fell to 3-7-1 in their last 11. ... New Jersey C Blake Coleman was a late scratch with an upper-body injury. Nick Lappin replaced him. ... New Jersey claimed LW Kenny Agostino off waivers Monday after Montreal released him. Agostino started Tuesday's game and got an assist on Zacha's goal.

Devils: At Chicago on Thursday.

Blues: At Arizona on Thursday.