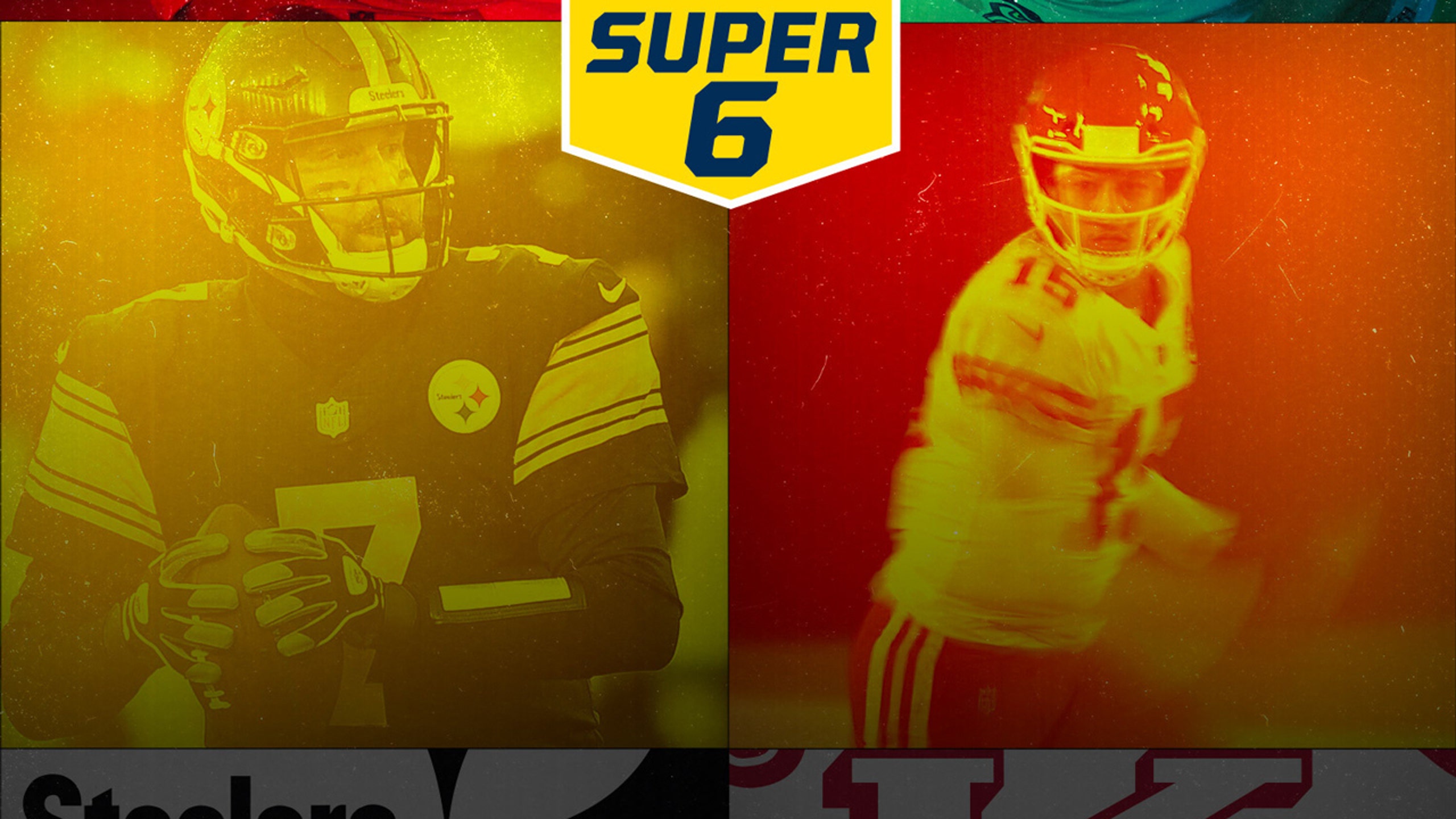 previous story
Spence Jr. vs. Garcia: How To Watch & More
next story
The NFC East's Pain Is Your Gain
National Football League

As we enter the home stretch of the NFL season, with five weeks left, we largely have a sense of who the best teams are.

And this week, NFL fans have a chance to win $100,000, absolutely for free, in the FOX Super 6 contest. Just download the app here and make your picks before kickoff on Sunday!

Before we get to the picks for this week's Super 6 slate, though, let’s compare teams to pop culture in 2020.

Kansas City Chiefs: Netflix. Remember when Netflix was delivered by the mail? That was early-career Andy Reid. Netflix popped when Ozark (Pat Mahomes!) came out of nowhere to be a massive hit, and then Tiger King (Tyreek “Cheetah” Hill) joined him. Netflix dominates pop culture, and the Chiefs dominate the NFL.

New Orleans Saints: "The Last Dance." Is this it for Drew Brees? He turns 42 next month, and has looked it this season. But just like a debate raged after "The Last Dance" – LeBron or Jordan? – New Orleans has its own. Will this team finally end its unlucky three-year playoff jinx?

Buffalo Bills: The Hulu of the NFL. Is it worth committing to Hulu? I’m not sure. That one Reese Witherspoon show looks interesting. "Lost" is my favorite TV show of all-time, so maybe I get a subscription. But am I getting enough bang for my buck with those two? Eh, I’ll probably just stick with Netflix and Amazon.

Green Bay Packers: "The Queen’s Gambit." Aaron Rodgers is absolutely brilliant. He’s often playing chess when others are playing checkers. But there are so many other problems with this team – chiefly on defense – sometimes you have to just look away, as I often do during some scenes starring the talented Anya Taylor-Joy.

Pittsburgh Steelers: Amazon. Consistently great, and with no glaring weaknesses. This is Mike Tomlin’s 15th season in Pittsburgh, and he’s never finished under .500. I can’t quit ordering from Amazon; you can’t quit gambling on the undefeated Steelers, who have the best against the spread record (8-2) in the NFL.

Seattle Seahawks: Emily in Paris. Russell Wilson won a Super Bowl with characters like the Legion of Boom and Marshawn Lynch. Now, like the star of the popular streaming show, Lily Collins, Wilson has a lot of new faces around him (Jamal Adams, DK Metcalf), and after some struggles, he’s settling in nicely as a Super Bowl contender once again.

The Bears are putrid, having lost five straight, but those defeats have come against teams currently in the playoffs or in contention (Vikings). Still, the Bears defense is extremely porous without Akeem Hicks in the middle, forcing linebackers and safeties to commit to the line of scrimmage, putting pressure on the secondary.

Perhaps the Lions are energized by the firing of Matt Patricia, and the return of D’Andre Swift and Kenny Golladay, and they avenge the season opening loss to Chicago in which they led 23-6 in the 4th quarter.

Detroit’s defense only has 16 sacks (27th in the NFL), and is 27th in blitz percentage, too. Can Mitchell Trubisky take advantage of a defense that couldn’t stop first-time NFL starter PJ Walker two weeks ago? Lions by 1-3 points.

This is a tricky spot for Taysom Hill, since the Falcons just saw him two weeks ago. Atlanta’s defense, since firing Dan Quinn, has surged from 30th in the league in the first five weeks, to ninth in the NFL in the last seven weeks.

It would be very Sean Payton to throw a Jameis Winston curveball at the Falcons, who should be prepared for Hill’s running tendencies. Atlanta just forced Derek Carr’s Raiders into five turnovers in a 43-6 domination, and the Falcons have started to percolate late in the season for the 2nd year in a row.

But if Todd Gurley and Julio Jones are out again, can the Falcons protect Matt Ryan long enough (sacked 8 times in last game vs Saints) for Atlanta to generate offense? Saints by 1-3 points.

The undefeated Steelers will have to play Washington on five days rest, but I’m not sure it will matter. Yes, Washington is coming off wins over the Bengals and Cowboys, but don’t read too much into the Thanksgiving beatdown thanks to a lopsided fourth quarter.

Washington had three scoring drives of less than 25 yards (two TDs and a field goal) against Dallas thanks to a fumble and failed fourth-down conversions by the Cowboys. Toss in a pick-six, and you get a perceived blowout.

However, there is a chance Pittsburgh comes out sleepy offensively in a sandwich game between the Ravens and Bills. We know the No. 1 defense in the NFL won’t. Steelers by 7-9 by points.

Looks like it’s going to be 34-year old veteran Colt McCoy in for the injured Daniel Jones (hamstring) at QB. McCoy struggled against a terrible Bengals, generating just 75 yards on 31 plays in less than one half of play.

Russell Wilson may find his big-play target DK Metcalf (NFL-best 1,039 yards receiving) blanketed by New York’s James Bradbury, but the rest of the Giants pass defense is among the NFL’s worst. Even on a short week, the Seahawks and their suddenly-stingy defense roll at home. Seahawks by 13+ points.

This is a hugely pivotal matchup of two teams with Wild Card aspirations, both coming off losses. The Cardinals have lost three of four, and the win was by virtue of a Hail Mary against Buffalo. Meanwhile, Kyler Murray’s shoulder doesn’t seem right, and he showed no interest in running against the Patriots (five carries, 31 yards).

That’s bad news going against a defense that overwhelmed him in their first meeting last year (sacked six times, 55 percent completions, one interception). In fact, the Rams are the only team in the loaded NFC West he has yet to beat.

On the other hand, everyone knows how to beat turnover-prone Jared Goff: Pressure him. Arizona blitzes at the fourth highest rated in the NFL, but still ranks just 10th in pressure rate. The Arizona defense is inconsistent, getting run over by Seattle two weeks ago but holding the Patriots to just 179 yards of total offense. Cardinals by 1-3 points.

Andy Reid’s Chiefs have won eight straight meetings versus the Broncos, and the last three have been by 27, 20, and 24. But the spread is the great equalizer, and sportsbooks have been inflating lines on the Chiefs for weeks, to the point it’s difficult for them to cover.

KC’s defense wasn’t very impressive versus Carolina, Las Vegas and Tampa Bay in the last three weeks, and despite wins, the Chiefs are 0-3 ATS in that span. This is a natural letdown spot following the marquee win against Tom Brady, but Denver isn’t the team to push them.

The Broncos lost slot cornerback Bryce Callahan to injury last week, and he would have attempted to defense Tyreek Hill (2nd in the NFL in receiving yards, 1st in TDs, 2nd in receptions of 20+ yards).

It doesn’t matter if it’s Drew Lock, Drew Brees, or Drew Bledsoe at QB for Denver; they’re not winning this game. Chiefs by 10-12 points.

An Inside Look at Patrick Mahomes' Playlist
What tracks does Kansas City's Patrick Mahomes listen to before taking the field? Martin Rogers has the answers.
4 hours ago

Terri gets her Truck
Terri from Maryland scored Terry's brand-new truck last week, and you can be the big winner this week by downloading Super 6!
16 hours ago