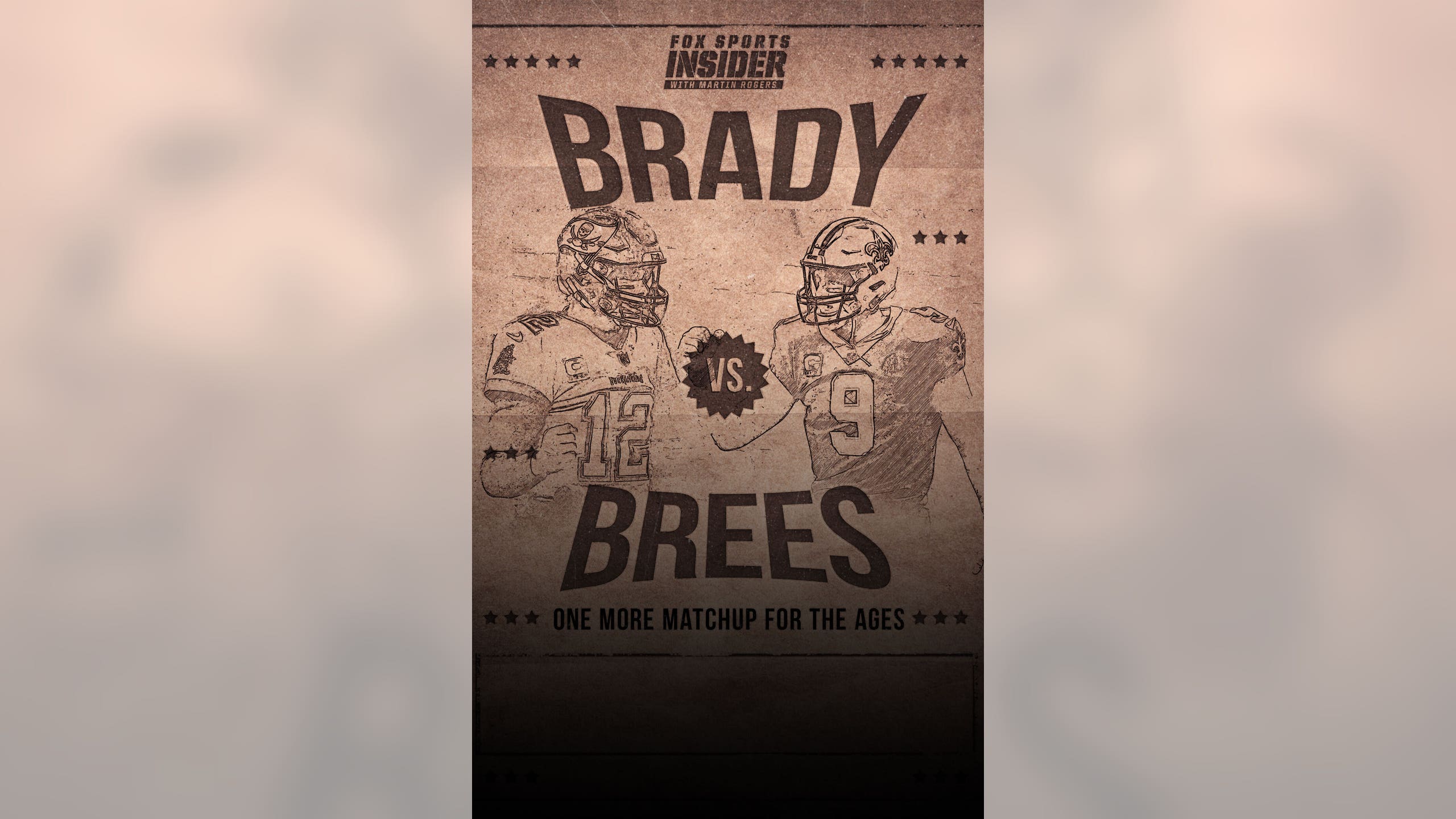 A long, long time has passed since Tom Brady and Drew Brees first met on a football field. Sure, not quite long enough for the two timeless quarterbacks to yet resemble their images in that tremendous History Channel meme cooked up by Brady’s social media crew.

But a long time.

As Brady and Brees go head-to-head for a ninth and probably final duel on Sunday (6:40 p.m. ET on FOX), it is as fitting as could be that this one, of all of them, matters the most.

Brees’ New Orleans Saints are seeking to give their inspirational leader the perfect sendoff before he is expected to stride away in the direction of a commentary booth and a future position in the Hall of Fame.

Brady is hunting down sports immortality, attempting to add to the six Super Bowl rings he won in New England by reimagining the modern history of the Tampa Bay Buccaneers.

The pair are friends, record-breakers and mutual admirers -- and perhaps no one else understands what it has taken the other to reach this point, still chugging at ages 43 and 42. But only one man can emerge from this weekend with his late-career dreams still alive. The other must nurse the sour tang of disappointment.

Everything is at stake, yet divisional-round week has brought plenty of nostalgia and no shortage of humor, memes notwithstanding.

"We were texting on Monday," Brees said. "Just kind of chuckling at this whole scenario. There’s 85 years and a lot of football experience that’s going to be on the field on Sunday."

"I’ve known [Drew] for a long time," Brady said during the Bucs’ media availability. "I’ve always had a great amount of respect for him, going all the way back to his Purdue days."

It was during Brees’ college career at Purdue that the QBs first encountered each other, with Brady’s Michigan Wolverines coming out on top, 38-12, on Oct. 2, 1999. There is some irony that their matchups started when the world at large didn’t know them, in front of 111,468 at Michigan’s Big House, and will end with them as famous as any athletes in America but playing before a limited Superdome crowd of around 3,000.

"It was loud that day," Marcus Knight, Brady’s leading receiver in the Purdue game, with 136 yards and a touchdown, told me via telephone this week. "The Big House was always loud."

Brees went into the game with Heisman aspirations and a growing reputation -- and with Purdue ranked No. 11 and Michigan No. 4. Brady was in the midst of a quarterback battle with freshman teammate Drew Henson.

"Brees was already Brees, but we weren’t that worried about Tom, to be honest," Matt Mitrione told me. Mitrione, a hard-hitting mixed martial artist with Bellator and previously the UFC, was part of the same incoming class at Purdue as Brees, and he started 35 consecutive games at defensive tackle. "We figured our bigger problems would come from [running back] Anthony Thomas."

However, Brady stood tall, and after Michigan burst to an early lead, there was no looking back.

"The Purdue offense with Drew Brees was spread out and very dynamic," Knight remembered. "We knew we had to put a lot of points up to help our defense out.

"This was the year when Tom was really getting the first opportunity to prove himself. You could see it in his eyes that he was looking for the respect he was due. There were other quarterbacks people were talking about, and he wanted to make everyone take notice."

Knight said Michigan benefitted from the shock and awe factor of the huge crowd, with Brees throwing for 293 yards but also tossing a key interception and coughing up a fumble in the first quarter.

Knight, who played 21 games for the Oakland Raiders from 2001 to '02 before spending time in NFL Europe, is now the wide receivers coach at Indiana State. He frequently uses the example of Brady’s college struggles when mentoring young players.

"I tell them to look at what he has done," Knight said. "If you can come through adversity, believe in yourself when not everyone does, make the most of your moment when it arrives and grasp it, then it is even more of a blessing than if you’d had it easy. That’s the story of Tom Brady."

Brady’s TB12 regimen has become legendary, but according to Mitrione, Brees’ attention to detail and competitive spirit have always been just as fanatical.

"We butted heads sometimes in college. I was a partier and he was much more conservative, but I could never throw shade at him because of how hard he worked. Everything was maximum intensity. He would set up these garbage cans to practice deep balls, and if he didn’t sink them, he would get furious with himself.

"Competition is his vice. I’ve never met anyone in sports with the same mental aptitude for competition as him. We would do Ultimate Frisbee for cardio, and they eventually had to tell Drew to stop playing for his own safety. He’d be full-length diving over offensive linemen to try to catch the frisbee. He had to win that badly. When you see that, it’s not so surprising he’s been as successful as he has."

There are lessons in those stories for all of us, yet neither Brady nor Brees is ready to become a fully fledged part of NFL folklore just yet. There is still serious business at stake, with two legacies that can still be further polished.

"[Brady] has the most to gain," former All-Pro Brandon Marshall said on FS1’s First Things First, when discussing what this postseason means to the remaining quarterbacks. "It is almost like Kobe and Shaq. If Tom Brady goes to win a Super Bowl without Bill Belichick, now we are not talking about him as the greatest football player of all time. I think that thrusts him in the conversation as the greatest competitor in all of sports."

However, Tampa Bay will go in as an underdog (+3, per FOX Bet), and Brees has the career edge, having bested Brady in five of the eight times they’ve played, including a 38-3 beatdown on Nov. 8.

Both superstars have faced countless big occasions such as this before, yet this one feels a little different. Time is ticking on both of them, and if things don’t work out, there is a long time to think about it afterward.

Wilson's Short List
Colin Cowherd broke down the best fits for Russell Wilson based on the preferred destinations of the superstar quarterback.
6 hours ago