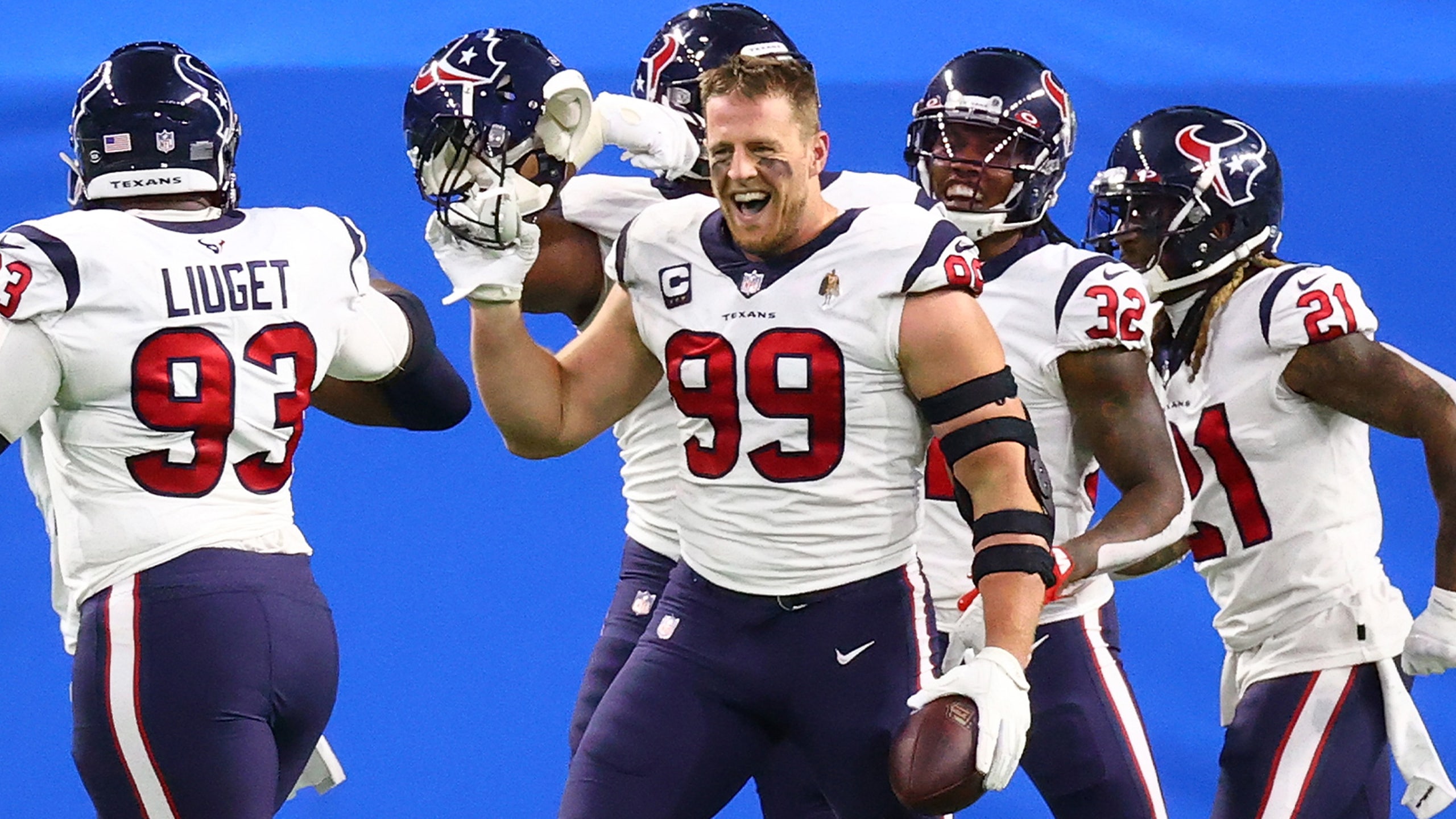 It wasn't quite the full slate of NFL action we were anticipating on Thanksgiving Day, but there was still plenty to go around on Thursday.

The Texans played their second-ever Thanksgiving game, having last visited the Lions on the holiday in 2012, and came away with a massive win.

Meanwhile, the Dallas Cowboys and the Washington Football Team rekindled their longstanding rivalry in a game that came down to turnovers and the trenches.

Check out all the biggest moments from a day that featured a plethora of trick plays.

Dallas will probably want to erase this play from the special teams playbook. On fourth-and-10 in the fourth quarter, the Cowboys tried to pull off a fake punt and, well ...

Fear not! The day still included a number of gadget plays that got the job done.

Lions head coach Matt Patricia went deep on the menu of plays for this one.

The Lions used a series of laterals to catch Houston's D unaware as Matthew Stafford threw a dart to an uncovered T.J. Hockenson.

Not to be outdone, the Texans pulled off a trick play of their own much later in the game.

Duke Johnson had everyone biting on the run, only to somehow pull off a backward jump pass to Deshaun Watson, who found Will Fuller all alone down the field.

A third helping of trickery

Teams are pulling out all the stops on the holiday stage. Washington got in on the act with this little diddy from Logan Thomas to Terry McLaurin.

OK, they cease to be trick plays if they keep happening, but Washington went schoolyard on this one.

Fumblerooski? The Annexation of Puerto Rico? We're curious what WFT has this call named in their playbook.

All Day on Turkey Day

Adrian Peterson found pay dirt on Detroit's first drive, barrelling in from the one-yard line to give the Lions an early lead.

With the score, the 35-year-old Peterson became the first running back aged 35 or older to score a touchdown on Thanksgiving since Hall of Famer Marcus Allen.

And if you need another reason to root for AD, he's donating 2,000 meals to Detroit families in need for every touchdown he scores in home games for the rest of the season.

Hit him right in the hands

Unfortunately for the Cowboys, the "him" in question here was a Washington defensive end Montez Sweat, who iced the Football Team's Thanksgiving victory with a pick-six.

JJ Watt came into the game hungry and perfectly played the ball at the line of scrimmage, jumping up to deflect and intercept a Matthew Stafford pass and scampering to complete the pick-six.

Unfortunately for the Texans, they had a delay of game penalty following the TD, and kicker Kaʻimi Fairbairn missed the subsequent extra point attempt.

Usually, first-and-20 is a recipe for disaster, but Watson went ahead and got the requisite yards ... and then some.

Credit Johnson for a great over-the-shoulder catch, plus a nice little nod ⁠— on purpose or not ⁠— to Bo Jackson with a run down to the tunnel.

Fuller to the house

Watson unleashed another arrow with a deep shot to the speedy Fuller, who glided into the end zone for a 40-yard touchdown.

Fuller had a monster day for Houston, racking up six catches for 171 yards and a pair of touchdowns.

Staring down a 24-point deficit in the fourth quarter, Stafford wasn't ready to pack it in. Take a look at this sidearm dish to Mohamed Sanu.

A moment of remembrance

Prior to their kickoff against Washington, the Cowboys players and coaches had a moment to honor the late Markus Paul, their strength and conditioning coach who died on Wednesday.

Additionally, the Cowboys are wearing a decal in Paul's honor.

Amari Cooper got loose in the second quarter against Washington, racing to the promised land on this seed from Andy Dalton.

Aldon Smith put the pressure on Alex Smith, whose pass landed in the hands of Jaylon Smith for a near pick-six.

A hustle play from McLaurin saved a touchdown, and Washington's defense buckled down to hold Dallas to three points off of the turnover.

Our 60-Minute Drill For Playoff Bettors
Four star quarterbacks. Two scintillating matchups. Our gambling experts answer all your questions before kickoff.
1 min ago

How To Win $500,000 on Bucs-Packers
Jason McIntyre breaks down the NFC Championship and offers his tips to help you win big in this week's Super 6 contest.
12 hours ago

Six Degrees Of Matthew Stafford
The Lions and their QB have mutually agreed to part ways. Do Stafford's ties around the NFL hint at where he might be headed?
16 hours ago

Catching Up With The Coaching Carousel
Nearly all of the NFL head-coaching vacancies have been filled. Check out who hired whom for the 2021 season.
1 day ago
those were the latest stories
Want to see more?
View All Stories
Fox Sports™ and © 2021 Fox Media LLC and Fox Sports Interactive Media, LLC. All rights reserved. Use of this website (including any and all parts and components) constitutes your acceptance of these Terms of Use and Updated Privacy Policy. Advertising Choices. Do Not Sell my Personal Info