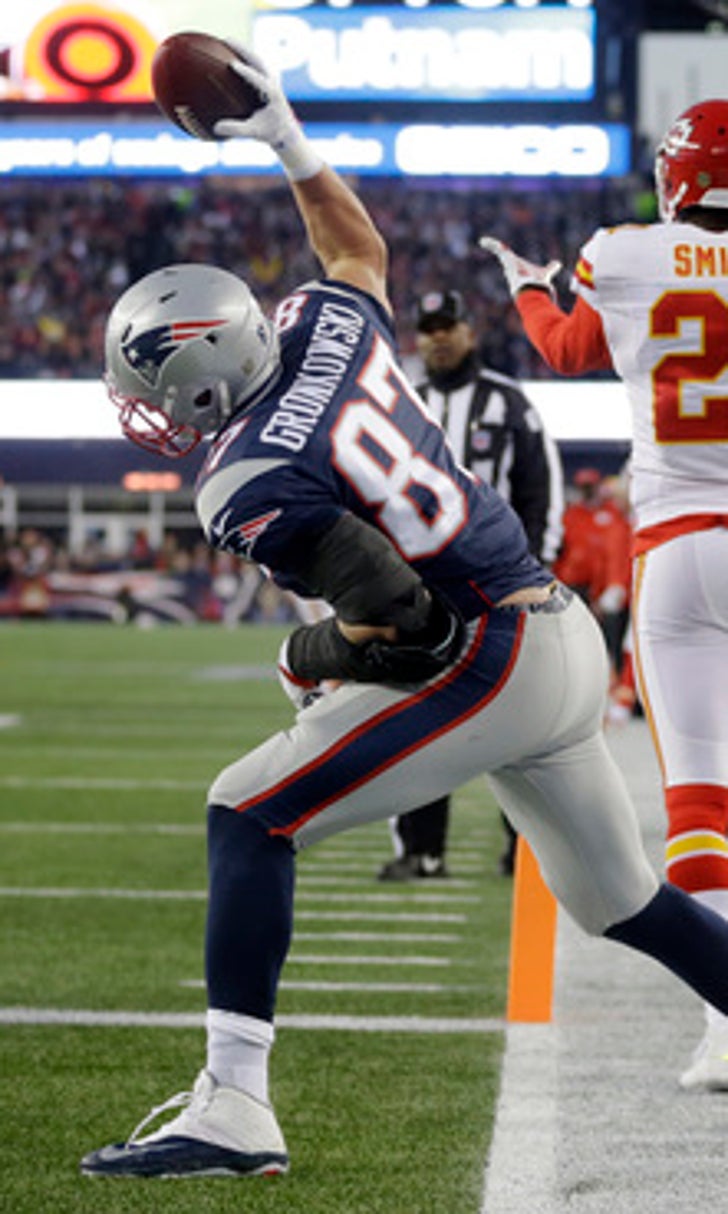 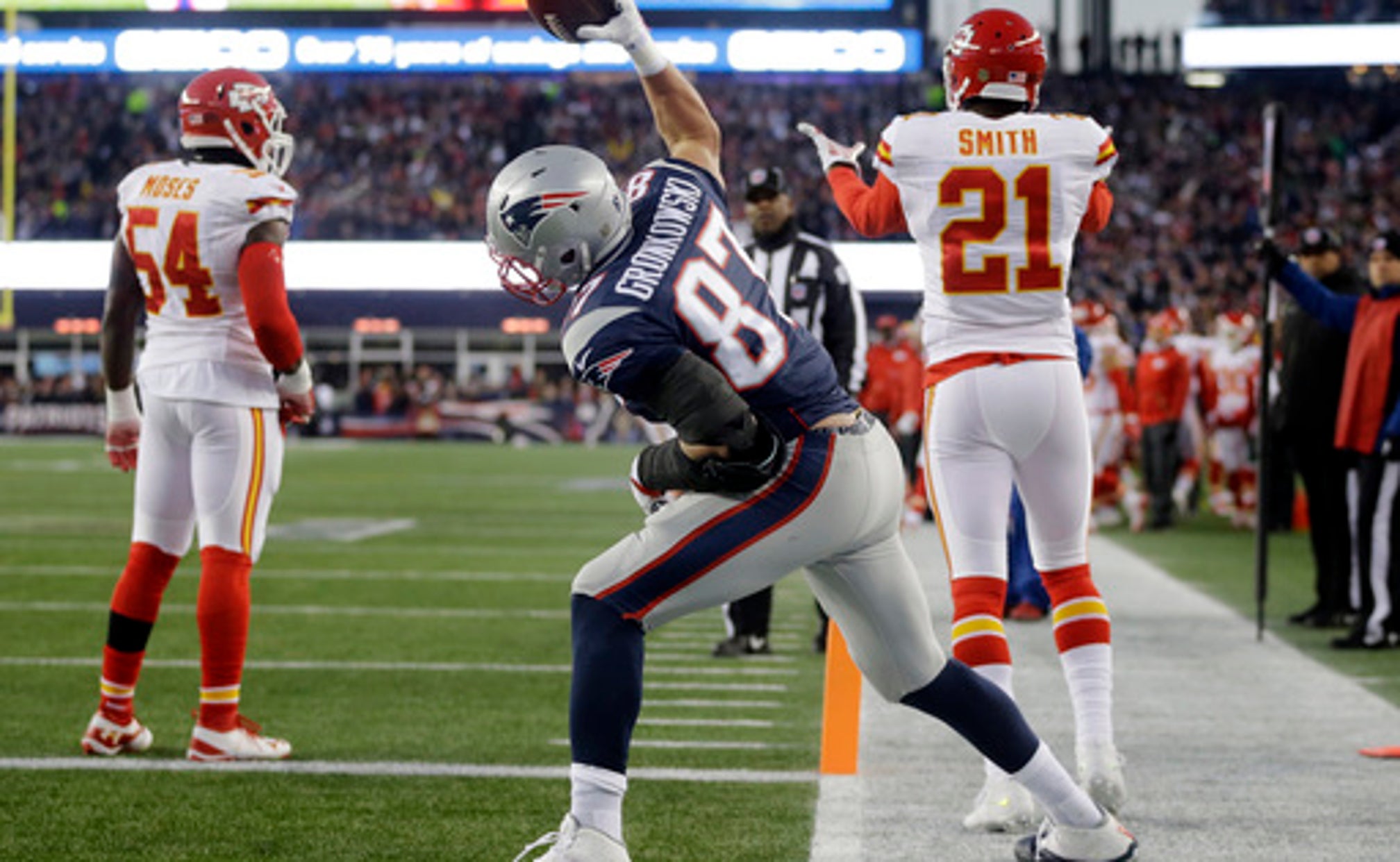 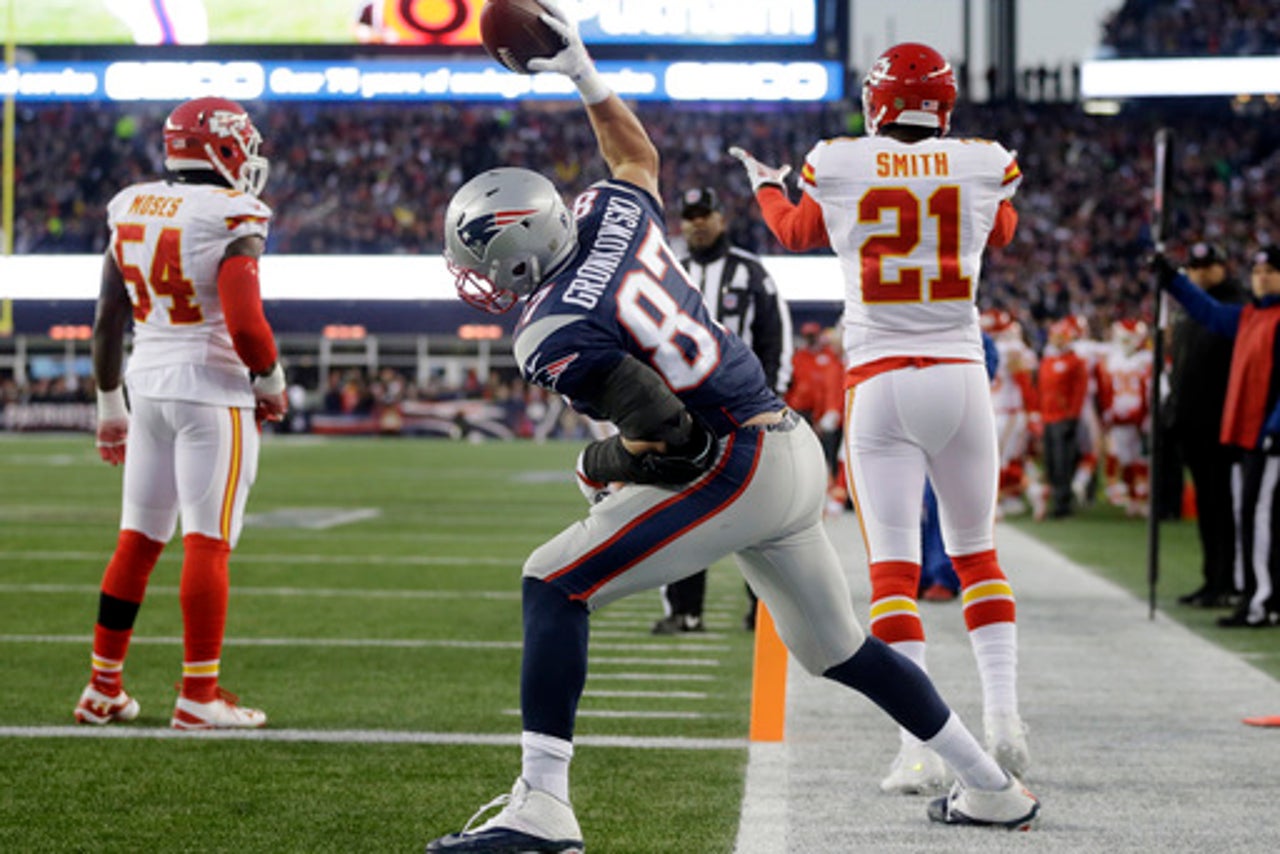 The Latest from NFL divisional game Saturday. (All times EST)

Tom Brady rushed for his sixth postseason touchdown, second in Patriots history, to give New England a 14-3 lead over Kansas City with 3:23 remaining in the first half.

The score came moments after Brady scrambled for 10 yards to get to the 1; video review upheld the ruling that he went out of bounds just short of the goal line. With center Bryan Stork back in after leaving briefly with an ankle injury and backup center David Andrews lined up as a fullback, Brady pushed forward into a pile of Chiefs for the score.

Brady is one rushing TD behind LeGarrette Blount, who has seven for the Patriots. Steve Young holds the NFL postseason record for quarterbacks with eight.

The referees are trying to keep this game under control, a week after the game between Cincinnati and Pittsburgh was tainted by illegal hits and penalties.

Patriots receiver and punt returner Danny Amendola was flagged for a hit on Kansas City's Jamell Fleming midway through the second quarter. Amendola was back to receive a punt, but Fleming was covering and got under the ball at around the 4-yard line. Amendola lowered his head and leveled Fleming.

On the next drive, Dezman Moses tried to take it out on Patriots quarterback Tom Brady and was called for roughing the passer.

New England center Bryan Stork is questionable to return against the Kansas City Chiefs with an ankle injury.

The Patriots offensive line has been beset by injuries all season, with 12 combinations of starters during the regular season.

New England just got back left tackle Sebastian Vollmer, who missed the regular-season finale after an ankle injury against the New York Jets on Dec. 27.

Chandler Jones started at defensive end for the New England Patriots despite his issues off the field last weekend.

Jones' status was uncertain for the game Saturday against Kansas City after he wandered over to a police station last Sunday, shirtless and disoriented, leaving his house reeking of burnt marijuana.

The Pro Bowl selection, who was fifth in NFL with a career-high 12 1/2 sacks, apologized to his teammates and fans on Thursday, saying he made a ''pretty stupid mistake.'' He declined to elaborate on what happened, and coach Bill Belichick refused to say whether Jones would be benched for any part of the game.

The Chiefs scored a field goal on the first drive, cutting the lead to 7-3.

New England's Rob Gronkowski tied Dave Casper and Vernon Davis for the most touchdown catches by a tight end in postseason history with his seventh.

Gronkowski, who was questionable to play with back and knee ailments, caught an 8-yard touchdown pass from Tom Brady on New England's opening drive to give the Patriots an early 7-0 lead over the Kansas City Chiefs in their AFC divisional round playoff game Saturday.

Gronkowski led the Patriots with 11 TD catches during the regular season and became the only tight end in NFL history with five career 10-TD seasons.

NFL referees might need to work on their coin tosses in the offseason.

At the AFC division playoff game Saturday between Kansas City and New England, referee Craig Wrolstad flipped the coin, and it was tails - which the Chiefs had called.

But, Wrolstad turned to the Patriots players and said, ''You win the toss.''

One of the Kansas City players then shouted that the Chiefs had called tails - and Wrolstad quickly corrected himself. Kansas City had, indeed, won the toss and deferred the opening kickoff.

The Patriots were involved in a coin flip-related controversy in Week 16, when they lost to the Jets 26-20 in overtime. Bill Belichick told his team to kick if it won the coin toss, which it did. But there was confusion when Patriots wide receiver Matthew Slater thought New England could choose the direction in which the team could kick.

Marshall's Keys: Patriots vs. Seahawks
Brandon Marshall breaks down how Cam Newton and the New England Patriots can snag a road upset Sunday in Seattle.
6 days ago
those were the latest stories
Want to see more?
View All Stories
Fox Sports™ and © 2020 Fox Media LLC and Fox Sports Interactive Media, LLC. All rights reserved. Use of this website (including any and all parts and components) constitutes your acceptance of these Terms of Use and Updated Privacy Policy. Advertising Choices. Do Not Sell my Personal Info