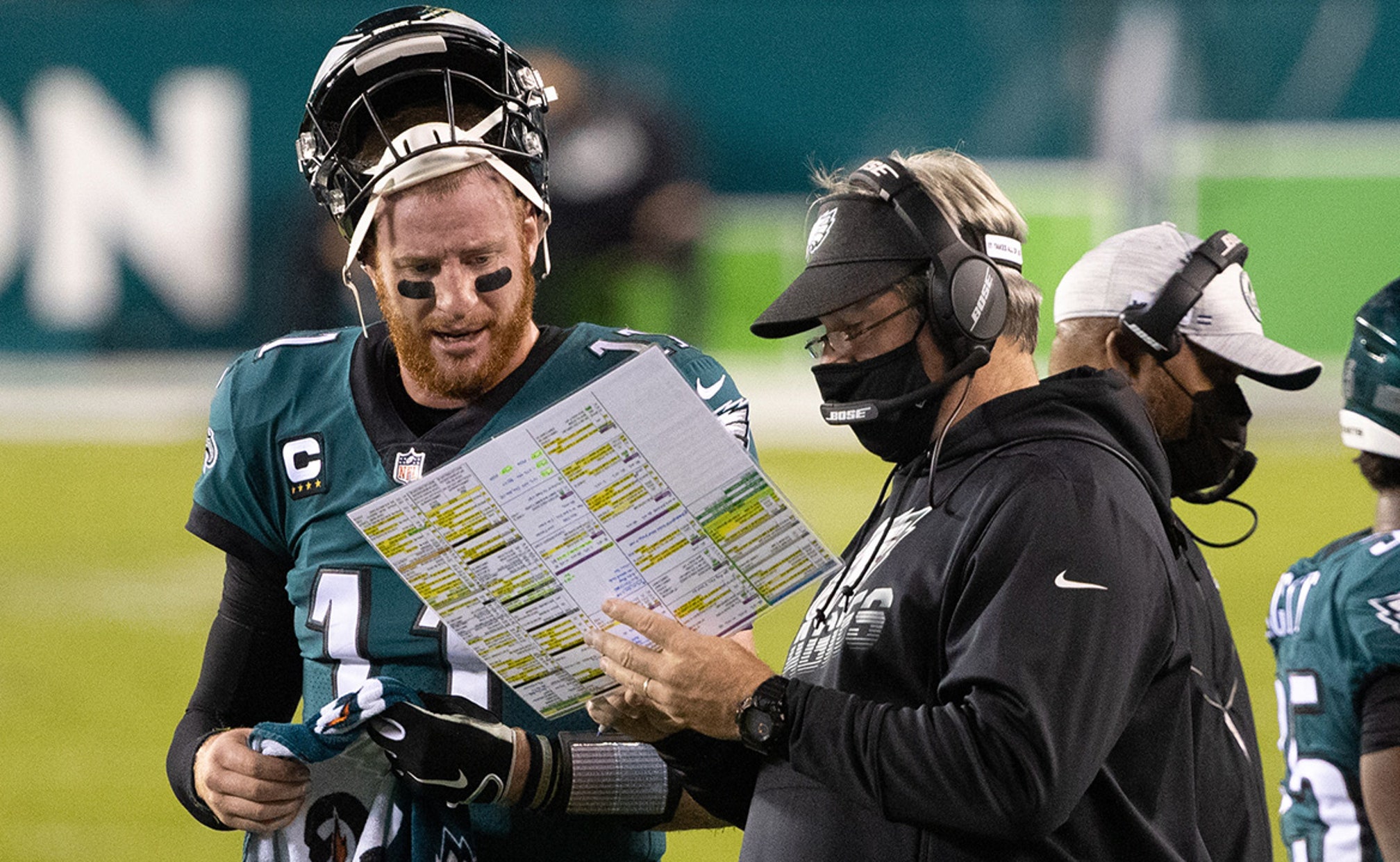 A new era is set to begin in Philadelphia – but likely not from a quarterbacking standpoint.

After deciding to part ways with head coach Doug Pederson on Monday, the Philadelphia Eagles appear to have thrown their support behind embattled ⁠— and handsomely paid ⁠— franchise quarterback Carson Wentz.

The Wentz-Pederson relationship started out successfully enough, as Wentz put up MVP-like numbers in his second year with the head coach before suffering a season-ending injury in 2017.

Philly went on to cap that season with a Super Bowl win – its first in franchise history – with backup QB Nick Foles leading the playoff offense in Pederson's second year at the helm.

The parade in the City of Brotherly Love was nothing short of legendary.

But the good times swiftly deteriorated, with that offseason and the 2018 season dominated by "Wentz vs. Foles" headlines.

The Eagles had a decision to make then, and they went with Wentz, signing the 2016 No. 2 overall pick to a four-year, $128 million extension and letting Foles walk in free agency.

Fast-forward to the 2020 season, ironically the season before Wentz's big-money extension officially kicked in, and the relationship between Wentz and Pederson came to the forefront.

Wentz suffered through arguably his worst season as a professional, completing just 57.4 percent of his passes for 16 touchdowns and 15 interceptions as the Eagles went 3-8-1. Along with 10 fumbles, Wentz was also sacked a league-high 50 times despite starting just 12 games. 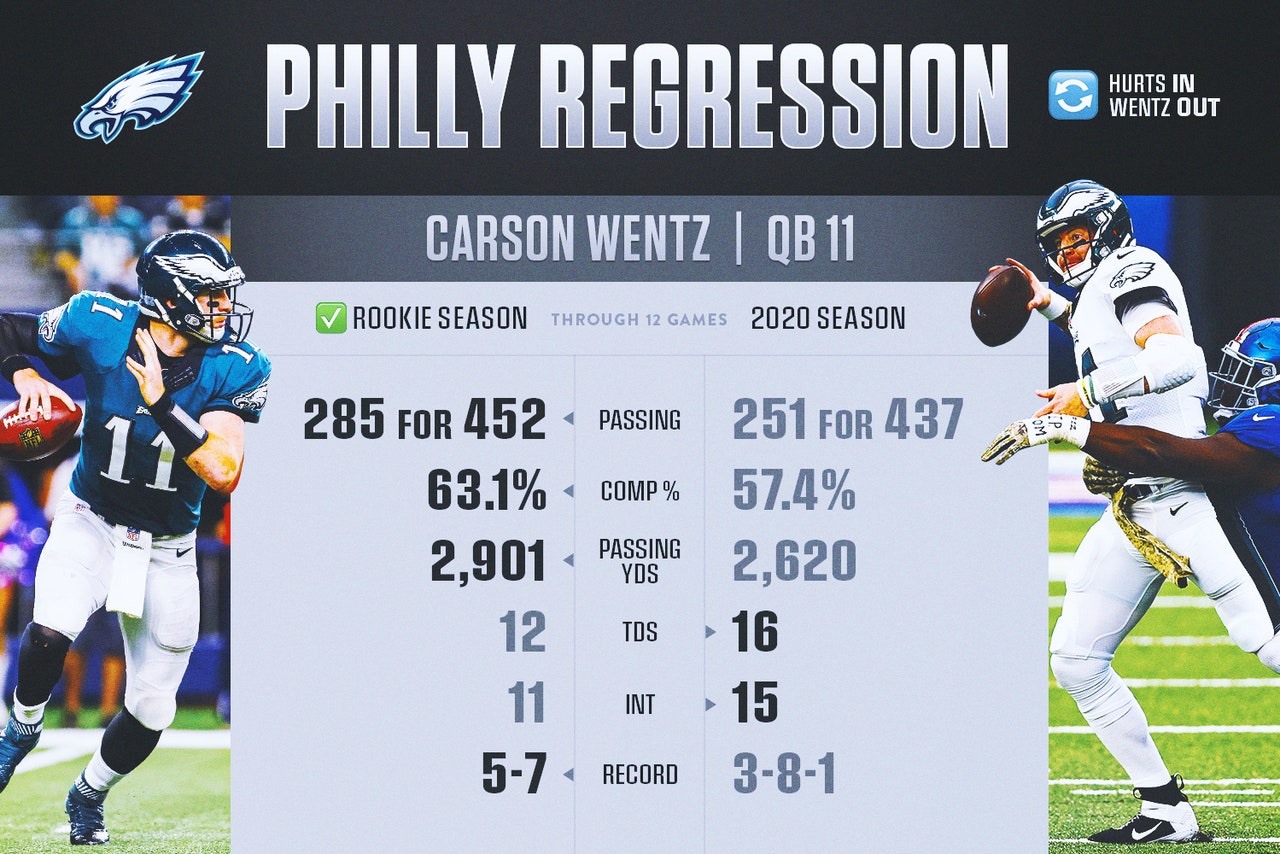 Pederson benched Wentz and inserted second-round pick Jalen Hurts in a Week 13 loss to Green Bay and rode with the rookie as his starter for the remainder of the season.

Another quarterback controversy was bubbling in Philadelphia under Pederson's watch, and reports indicated that the Wentz-Pederson relationship was fractured.

Just over a week later, Pederson and the Eagles parted ways, and here we are.

The early reaction is that the Eagles once again had to decide between Wentz and an alternative, and they opted for Wentz. 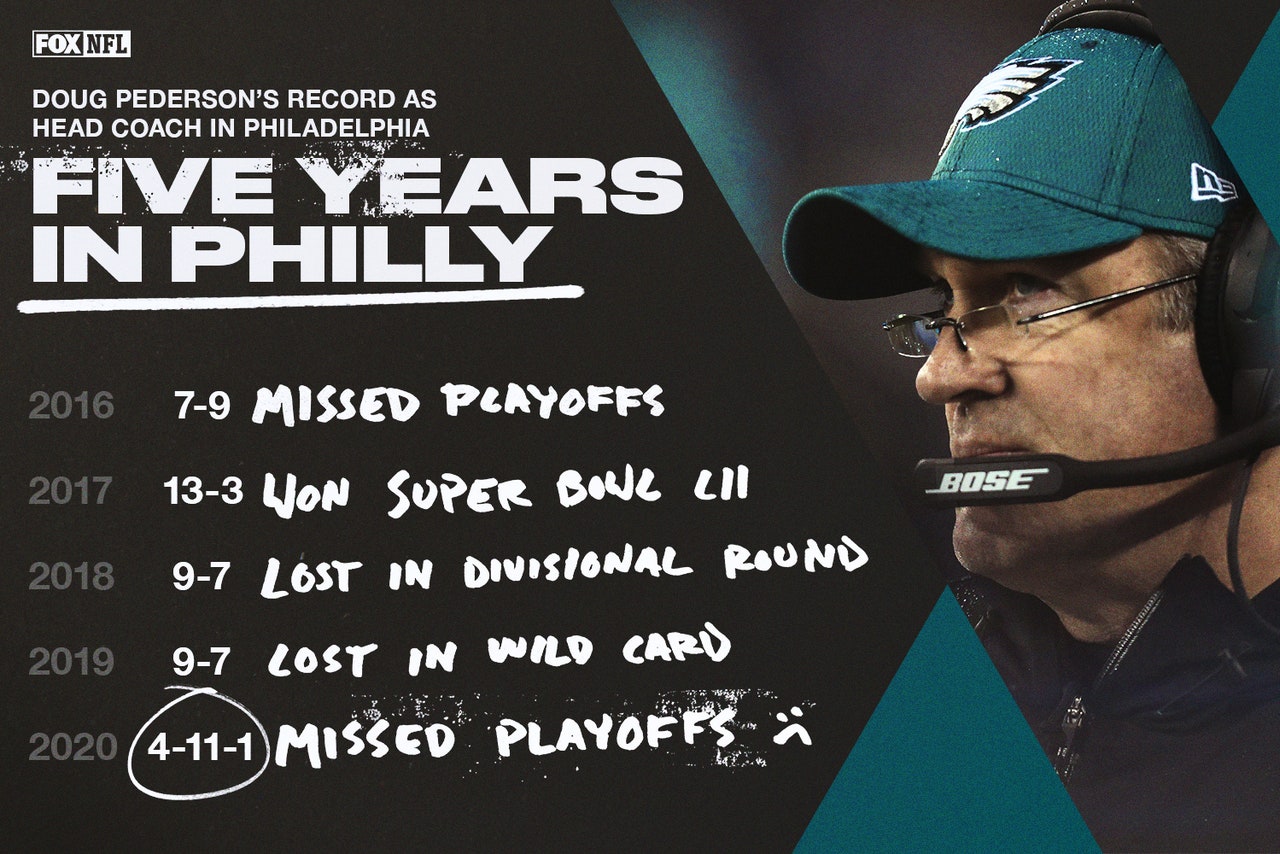 "Clearly, this is about the relationship breakdown between Wentz and Pederson. I understand that you have invested a truckload of money in your quarterback, but many of the things that happened this year were out of your control. Every week you start a different O-line unit, they couldn’t block their way out of a wet paper bag, and your QB took a beating.

"Also, the weapons that you invested in through the draft and free agency have not produced. That seems more like a personnel issue than it does a coaching issue. But this is the world we live in. We need instant success, and Super Bowl championships and playoff runs only buy you a little bit of time."

But is the move the right one from Eagles owner Jeffrey Lurie?

Brandon Marshall put it rather plainly on First Things First:

"For you to have a coach there that led you to a Super Bowl and won it – I think this is a big mistake."

ESPN's Dan Orlovsky and Jeff Saturday also weighed in on the decision, with Saturday saying the decision "doesn't make sense."

Orlovsky, meanwhile, stated that Wentz will be facing more pressure than any other player in the league to perform next season.

On Good Morning Football, Kyle Brandt couldn't make sense of the decision to get rid of a head coach who has a statue ⁠— courtesy of the "Philly Special" ⁠— in front of Lincoln Financial Field

"There's no way this is about football. There has to be some sort of inner strife, some sort of personality disagreement ... He won a Super Bowl, and now he's gone. I'm still kinda pissed about it."

However, for Nick Wright, the decision to get rid of Pederson isn't necessarily the wrong move.

It's actually not quite enough.

Given how the Eagles have performed since winning the Super Bowl and Wentz's culpability during that time, Wright believes Philadelphia could use a clean break from both coach and quarterback.

"You can't have three years of being bad at your job and keep your job, no matter how good you were early in your tenure. But, if they're doing this so they can keep Wentz, it's a mistake. If you're doing this because you want to turn the page from everybody, fine. But I'm not going to cry tears for Doug Pederson about this one."

As it stands, interviews are ongoing in Philadelphia, as the Eagles look for a new coach to right the ship.

Will this new hire mesh with Wentz and get the 28-year-old quarterback firing on all cylinders again? Or is history doomed to repeat itself in Philadelphia?