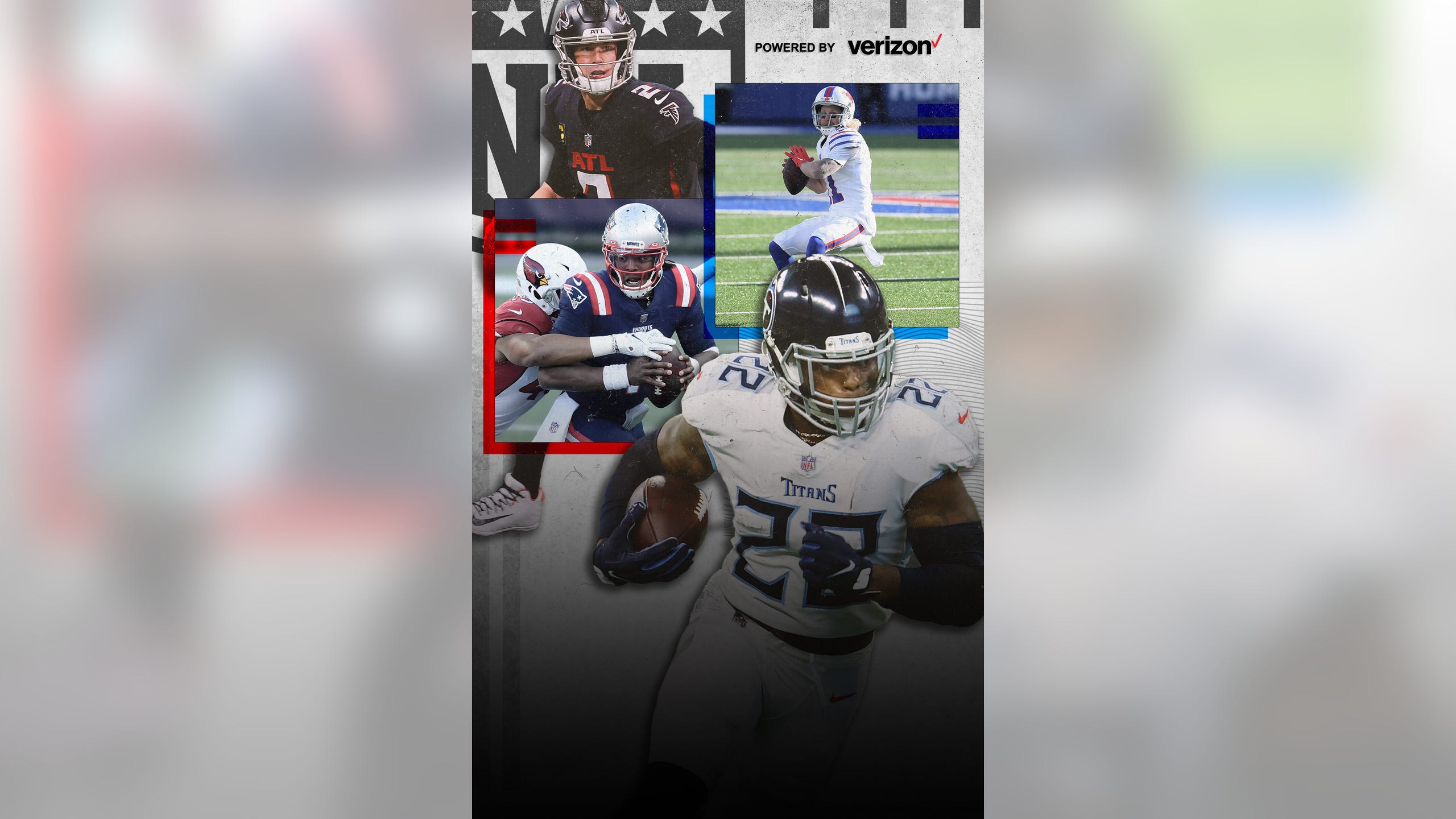 Derrick Henry continued to torment opposing defenses in Week 12, bullying his way to three first-half touchdowns to help the Tennessee Titans reclaim first place in the AFC South with a 45-26 victory at Indianapolis.

Outside of Henry's dominance, there was plenty of action to take stock of, both on and off the field, in a busy slate of games in the early window Sunday.

Here are the major takeaways from the first eight games:

Henry strong-armed his way to a trio of first half touchdowns, as the Titans avenged an earlier loss to the Colts in Nashville.

Indy’s rush defense ranked third in the league coming into Week 12, allowing an average of 89 rushing yards per game.

But that meant little to King Henry. 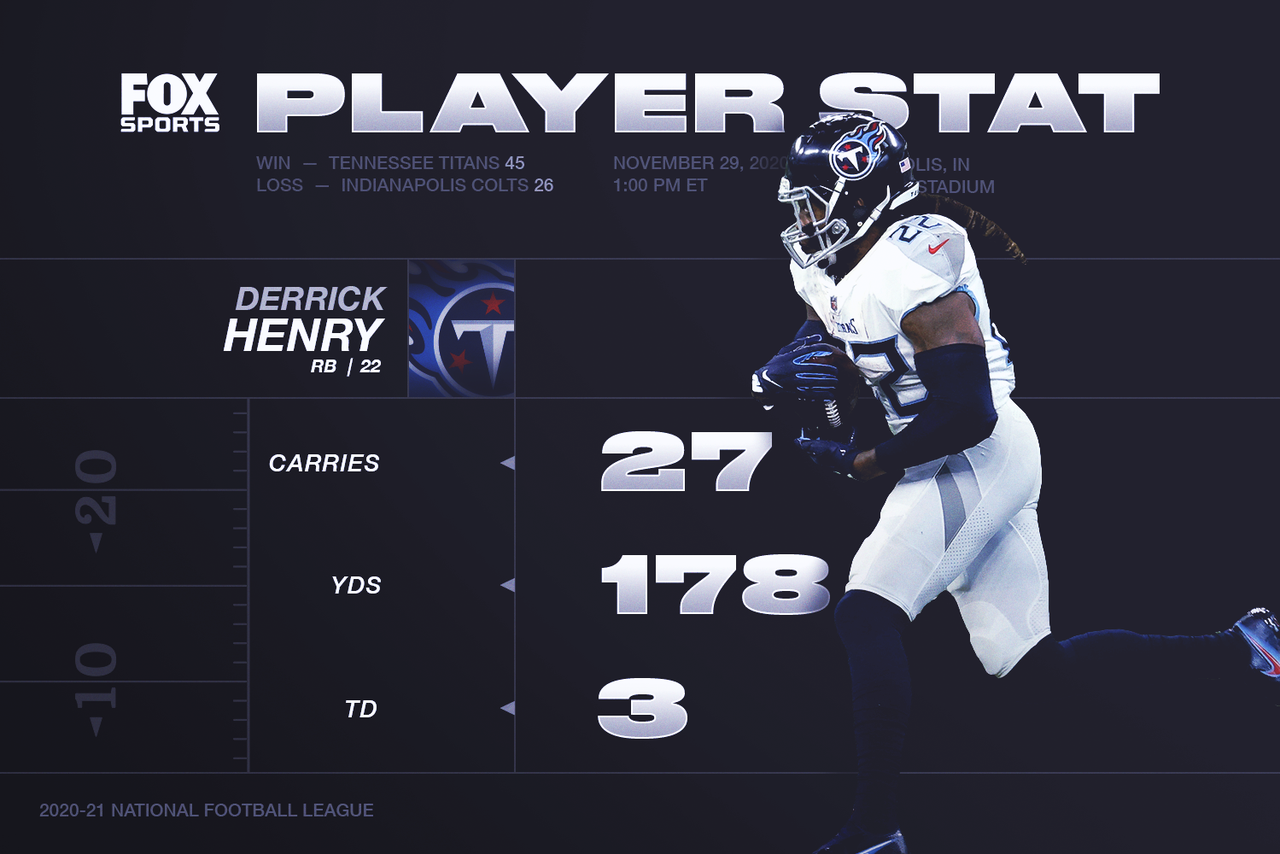 A.J. Brown also had a big day for the Titans, catching four passes for 98 yards and a score.

Brown made a stupendous play on special teams, too, taking an onside kick to the house in the fourth quarter.

The victory leapfrogged the Titans (8-3) over the Colts (7-4) into control of the AFC South.

The Atlanta Falcons put the handcuffs on Derek Carr and the Raiders, forcing four turnovers (one interception, three fumbles) out of the Las Vegas quarterback in a 43-6 shellacking.

One of those turnovers resulted in a pick-six by Atlanta linebacker Deion Jones, pushing the Falcons' lead to 23-3 in the third quarter.

Matt Ryan played a steady game for the hosts, finishing 22-for-39 for 185 passing yards, two TDs and an interception, all without the services of the injured Julio Jones.

The loss drops the Raiders to 6-5 on the season, putting a damper on their playoff hopes in the ultra-competitive AFC. For the 4-7 Falcons, the 43 points are their most in a game this season, and it marks the first time they’ve held an opponent to less than 17 points.

A late push from the Chargers fell short, as Buffalo and Los Angeles went back and forth in a sloppy fourth quarter, highlighted by a fourth-and-27 "Hail Mary" the Chargers came down with.

For Buffalo, Josh Allen had 157 passing yards and a TD, but he had two fourth-quarter turnovers. Fortunately for the Bills, Justin Herbert and the Chargers weren’t able to capitalize on the late gifts, and actually returned the favor.

Earlier in the game, Buffalo pulled off a clever trick play that saw wideout Cole Beasley throw a dime to Gabriel Davis for a touchdown in the second quarter.

The victory pushed Buffalo’s record to 8-3, one game clear of the 7-4 Dolphins in the AFC East.

The way the Patriots started the game against the Cardinals, it looked like it’d be a long day for New England fans. Cam Newton was intercepted on the third play of New England’s first drive, which the Cardinals turned into a Kenyan Drake touchdown.

But New England stayed the course and kept the game within striking distance, down just 10-7 at the half following a fourth-down stand to close out the opening 30 minutes.

With the score tied at 17-17 in the fourth quarter, the Cardinals had a chance to take the lead inside of the two-minute warning, but Zane Gonzalez’s kick sailed wide right.

Newton and the Pats took over, and a 29-yard run on third-and-13 from Newton, along with an unnecessary roughness penalty on Cardinals rookie Isaiah Simmons, put the Patriots in prime position.

New England picked up a few more yards to get into kicker Nick Folk’s range, and the veteran kicker delivered Bill Belichick’s team an important victory.

While winning pretty is preferred, Newton summed up the prevailing sentiment in his postgame press conference.

Kirk Cousins orchestrated a seven-play, 75-yard drive in the game’s closing minutes to give the Vikings a razor-thin 28-27 victory over the Carolina Panthers.

While Chad Beebe hauled in the game-decider, rookie Justin Jefferson continued his dazzling freshman campaign with seven catches for 70 yards and two TDs.

Jeremy Chinn had a day to remember for the Panthers, scoring the first two touchdowns of his career in glorious fashion in the third quarter.

The 22-year-old rookie safety followed up his first scoop-and-score with another on the ensuing possession, making team history in the process.

Teddy Bridgewater had a so-so return to Minnesota, finishing with 267 passing yards, a TD pass and a pick.

With quarterback Daniel Jones banged up, the Giants toughed out a narrow 19-17 victory over the Joe Burrow-less Cincinnati Bengals. New York moved to move to 4-7 on the season and took the lead in the NFC East.

Running back Wayne Gallman stayed hot for the Giants, rumbling for 94 yards and a score on 24 carries.

The highlight of the day for the Bengals came courtesy of Brandon Wilson, who took the first kickoff the Bengals received for a quick score.

Quarterback Brandon Allen and the Bengals had a late opportunity to take a potential lead, but the Giants slammed the window shut with a strip-sack.

It was an inevitability for the 1-10 Jaguars, but they’re now officially eliminated from playoff contention, joining the New York Jets in that unenviable club.

The Jaguars made it a fight in their 27-25 loss to the Browns, but couldn’t get the two-point conversion to tie the game in the fourth quarter following a James Robinson touchdown.

Baker Mayfield played a clean game, completing 19 passes for 258 yards and two TDs. Mayfield hooked up with Jarvis Landry for eight receptions for 143 yards and a score.

The ground game is where the Browns really thrived, though, as Nick Chubb (19 carries, 144 yards, one TD) and Kareem Hunt (10 carries, 62 yards) dropped the hammer to move Cleveland to 8-3.

With Tua Tagovailoa nursing a thumb injury, Ryan Fitzpatrick returned to the Dolphins starting lineup and feasted against the New York Jets in a 20-3 victory.

"Fitzmagic" went 24-for-39 with two TDs, linking up with DaVante Parker for eight catches and 119 yards.

Miami’s defense clamped down on Sam Darnold and the Jets, forcing two interceptions out of the Jets QB, who finished 16-for-27 with 197 yards.

With the pair of turnovers, the Dolphins have now gone 17 straight games collecting a turnover dating back to last season. On the bright side for New York, they fared better than they did in a 24-0 loss in Week 6.

An Inside Look at Patrick Mahomes' Playlist
What tracks does Kansas City's Patrick Mahomes listen to before taking the field? Martin Rogers has the answers.
4 hours ago

Who Is Nick Sirianni?
The Eagles have their new head coach. But who is the man tasked with solving Carson Wentz and Philly's long list of issues?
9 hours ago

Pressure Point
With the NFC's Super Bowl berth at stake, two top QBs are feeling the heat, but who is under the most pressure?
15 hours ago

Terri gets her Truck
Terri from Maryland scored Terry's brand-new truck last week, and you can be the big winner this week by downloading Super 6!
16 hours ago