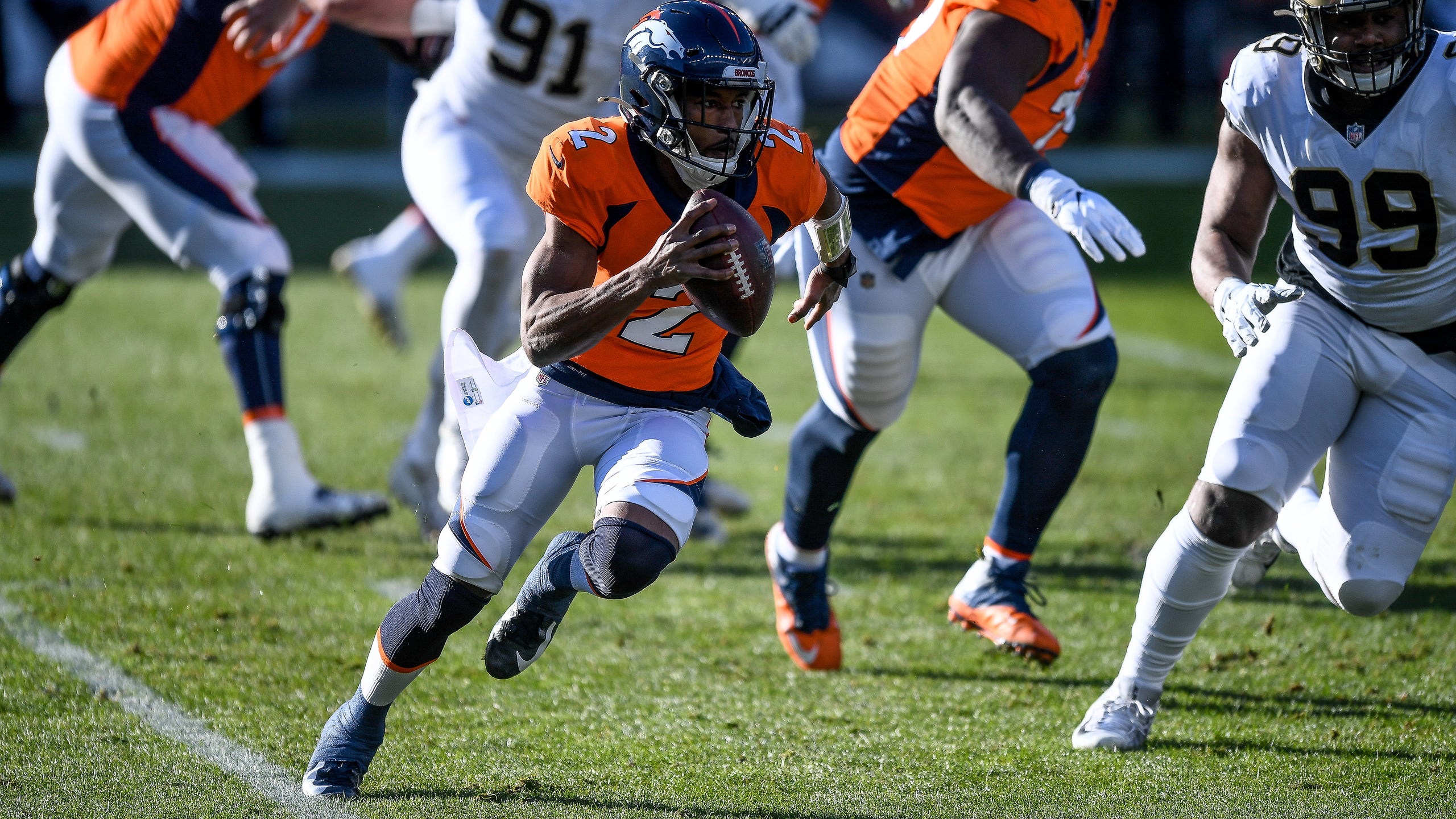 This NFL season has featured challenges that I hope we never see again, as the league plays during a global pandemic.

Positive tests and contact tracing regularly have taken both players and coaches off the field. Everyone has had to be flexible — none more so than the Denver Broncos this past Sunday.

Denver hosted the New Orleans Saints in one of the oddest games in NFL history. The Broncos' entire quarterback room, including their three QBs on the roster and one practice-squad player, were ineligible to play in Week 12 because of a COVID-19 positive test and close contact protocols.

The Broncos learned of this news less than 24 hours before their scheduled 4 p.m. ET kickoff against the Saints. Because of COVID protocols, Denver had to find a quarterback from only its roster. No free agent, no coach, no one else could take that spot.

The Broncos chose Kendall Hinton, a former college QB at Wake Forest and current wide receiver on their practice squad. And in turn, the team's coaching staff scrambled Saturday night to put together a game plan Hinton would be comfortable executing.

It went as expected – very badly. 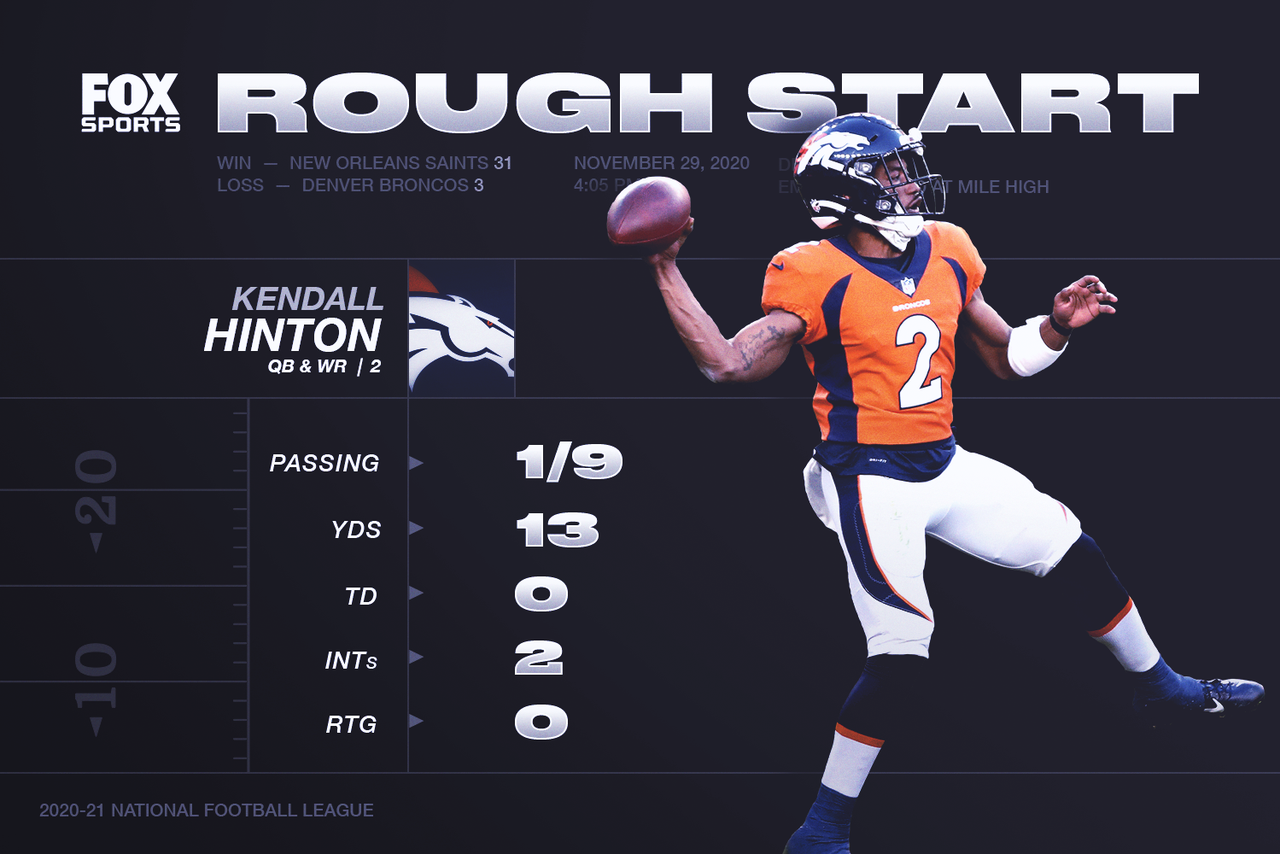 But nonetheless, I remain fascinated by how the Broncos even got themselves ready to play on offense.

In a typical game week, the offensive staff watches, grades and then meets with the players Monday to review the previous game. By the time you’re feeling that hunger for dinner, the coaching staff is already working on the base game plan for the next opponent. That plan includes first- and second-down runs and passes.

The coaches continue Tuesday, studying third-down, short-yardage and goal-line plays, as well as anything else that needs to be put in.

Unlike training camp — when you install the entire playbook over the weeks of camp — during the regular season, you only install plays that fit the offense for that week's opponent.

The Broncos have quarterbacks who aren’t terribly mobile. So, any sort of "Wildcat" package — which was made famous in the NFL back in 2008, when the Miami Dolphins put a running back at QB to run college option-style running plays in an attempt to catch the defense out of a gap — would not be in the game plan.

However, when you’re down four quarterbacks and bring up a practice-squad QB who’s mobile and hasn’t thrown a pass in years, you have to install Wildcat plays to make any offense work.

If Hinton was the planned starting quarterback, the Broncos would have installed the base Wildcat offense Wednesday and worked on it all week. But instead, it was announced he was starting late Saturday.

I cannot imagine the panic throughout the offensive staff and players about how to run a competent attack against the Saints. They had Saturday night and Sunday morning to install new plays that fit Hinton, which is a time normally reserved for reviewing the final plan. How’d the Broncos do this?

Sources told me Denver running back Phillip Lindsay helped with the process, bringing out his playbook from Colorado that included a wide variety of Wildcat plays.

With the help of Lindsay, the Broncos were able to install some semblance of an offense that the unit could attempt to run, including with Lindsay playing the role of Wildcat quarterback throughout the game.

They used Saturday night to "install" this offense, and in the passing game, the Broncos used the most basic of plays. The QB rollout and the standard play-action pass plays from Wildcat were the staples of an extremely limited menu.

The Broncos' hope was the Saints would make a mistake or two, Hinton would make a play and they would get a score.

While the offense wasn’t at all successful Sunday, with Hinton going 1-for-9 with two interceptions and the Broncos totaling 112 yards in a 31-3 loss, I appreciated the effort from this unit. The Broncos battled. They fought, but it was a war they had no chance to win.

I’ve played on bad offenses with actual starting quarterbacks who had no chance to win a game. It’s demoralizing, but you try finding little wins. We got a first down. The quarterback didn’t get hit and so on. It's sad, but that’s your mindset.

Let's hope the Broncos get their regular QBs back on the field next week.

Geoff Schwartz, who played nine seasons in the NFL for five different teams, is a FOX Sports contributor.

Get more from Denver Broncos Add to your favorites to get information about games, news and more.
in this topic

NFL Mock Draft 6.0
With the Super Bowl fast approaching and the combine next on the NFL calendar, check out Jason McIntyre's latest Mock Draft.
10 hours ago

Colin Cowherd's Blazin' 5: Week 15
After back-to-back winning weeks, Colin is feeling good. Check out his top five wagers in NFL Week 15.
December 18, 2020
those were the latest stories
Want to see more?
View All Stories
Fox Sports™ and © 2021 Fox Media LLC and Fox Sports Interactive Media, LLC. All rights reserved. Use of this website (including any and all parts and components) constitutes your acceptance of these Terms of Use and Updated Privacy Policy. Advertising Choices. Do Not Sell my Personal Info