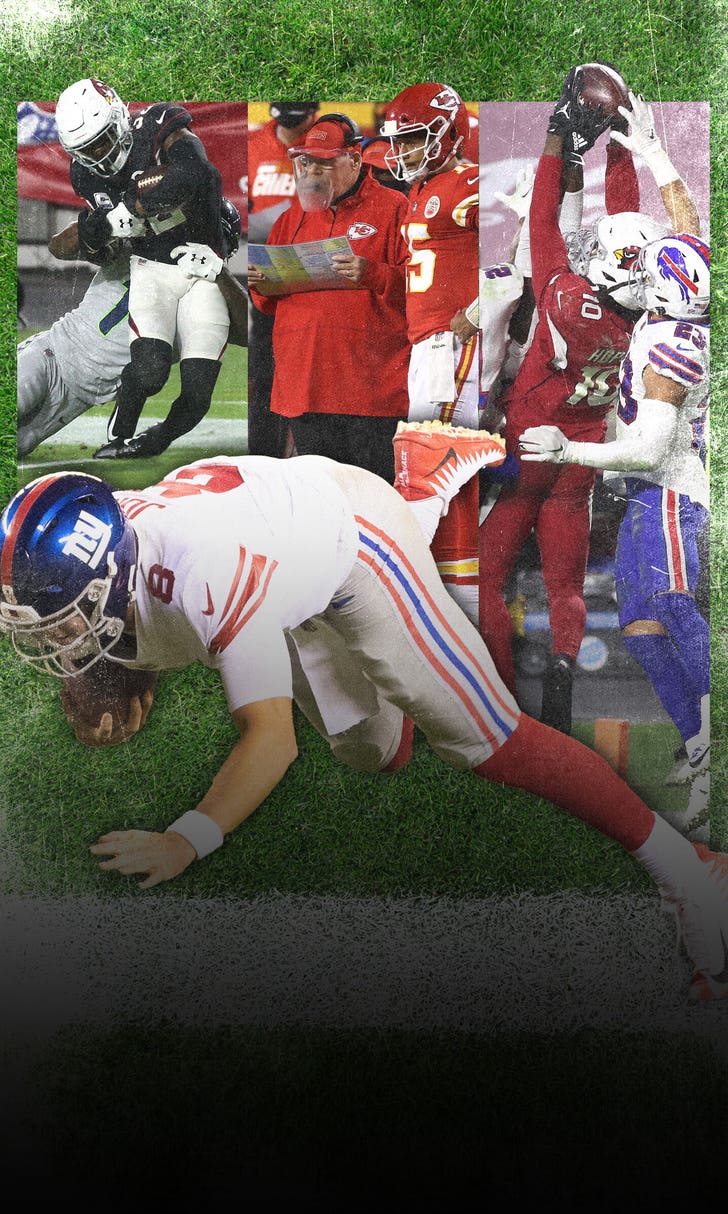 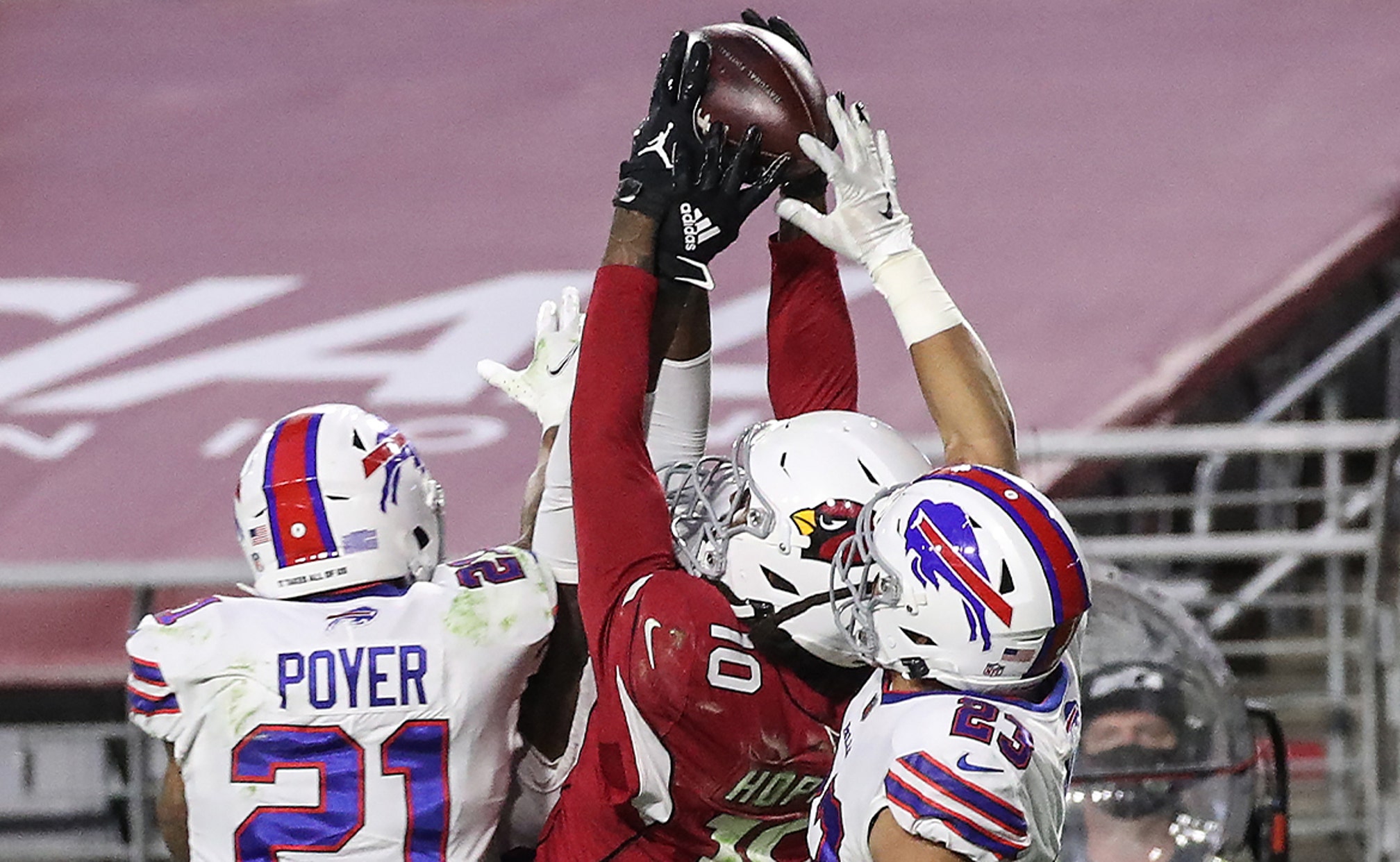 It’s hard to believe, but we made it through all 256 games of the 2020 NFL regular season.

I can’t decide if it has felt like 10 years or two days since Week 1, because time no longer makes sense.

But no matter when they happened, there were a few highlights that were unforgettable.

Let’s look back at the 10 most spectacular moments of the year, from fashion icons strutting the sidelines to quarterbacks taking bathroom breaks.

10. Andy Reid on the cover of Vogue

Andy Reid was already a fashion icon, thanks to the Aloha shirts he wears when he’s feelin’ festive (he prefers the Tommy Bahama brand, in case you were wondering). But Reid took things to a whole new level when he clipped a plastic face shield to the brim of a Chiefs ballcap and proceeded to coach the home-opener.

Except there was one unforeseen issue: Over the course of the night, it got foggier and foggier.

There are two plays that really summed up this season for Atlanta.

First up: the failed onside kick.

Remember that? When the Cowboys tried that "spinning watermelon" onside kick, and the Falcons just watched the ball trundle along the field for 10 yards until Dallas recovered it? It truly felt like the Falcons just forgot how to play football.

Atlanta also blew a 20-point lead in that game, which is something new and different!

And then, a few weeks later, Todd Gurley accidentally scored a touchdown that cost the Falcons the game against Detroit.

Gurley wasn’t supposed to score a touchdown here against the Lions, because it gave the ball back to Detroit with a little time left, and the Lions (in not very Lions fashion) somehow scored a touchdown and made the extra point.

Even when the Falcons score, they somehow lose points, and I just feel like this year, there were so many times that doing the thing you were trained to do — score a touchdown, win a game — ended up actually hurting the team ... *cough* Jets *cough*.

Summary: The Buccaneers played the Bears in prime time, and Tom Brady thought it was third down. But it wasn’t. It was fourth down, and the Bucs lost.

Look, this mistake is pretty much the only negative thing I can say about Tom Brady’s season in Tampa Bay, so just let me have this, OK?

This play made me wonder how it’s possible that DK Metcalf and I are both humans.

Watching this speed demon track down Budda Baker made it clear Metcalf is more evolved, and I am a slug.

Can you imagine moving that fast? It was stunning.

He might as well have been shooting those Mario Kart speed mushrooms (or whatever you call them) out of his feet.

6. You don't want to get stiff-armed by Derrick Henry

If I were to say, "Remember that time Derrick Henry stiff-armed that guy into the nosebleeds?", you’d be like, "Which time? Who knows! There were a thousand!"

But these plays are important because they’re A) Pretty metal and B) Make it clear why Henry made it into the 2,000 yard club.

He just ... runs over people who are in his way. He’s the human equivalent of a brick wall that grew legs and learned to run really fast, which is to say impossible to stop.

And Henry just seems to get better and better as games go on! Most people get tired, but Henry seems to find MORE energy in the fourth quarter.

Henry should be MVP. He won't be, because he’s not a quarterback, but if there were ever a time for a running back to win the award, it’s now.

There is so much I could say about the Monday Night Football game between the Browns and the Ravens. To start, it was the best Monday night game all season, and maybe just the best game all year.

This was a rock ‘em, sock ‘em shootout between two of the best young QBs from the 2018 draft, and yet, all anyone could talk about was whether Lamar Jackson left the field because he had to poop.

You know, this is, to me, the beauty of sports. We can be immersed in the most incredible game, watching unbelievable feats of athleticism, and fans — myself included, trust me! — will find the lowest common denominator, the crudest thing, to unite over.

Jackson said he had leg cramps, but we were out here analyzing the way he ran to the locker room (could that have just been cramps!?) and the amount of time he spent in there. The jokes that poured onto the internet after the Ravens went for two against the Browns were legendary.

Sure, Lamar. Whatever you say.

This was an early indicator that this season was going to be a wild ride for the Jets. During a game against the Dolphins, Marcus Maye picked off Ryan Fitzpatrick. Except ... Maye made this interception by pinning the ball to his butt.

It was redemption for the butt fumble all those years ago. Shoutout to Mark Sanchez!

So, yes, Maye caught it. But he caught it with his butt. The play encapsulates the Jets season — the players did everything they could to win, while the organization appeared to try to tank, yet ultimately didn’t even succeed at being bad enough for the No. 1 pick. And now Adam Gase is fired.

This is how I felt about the Pats season and about 2020 in general.

But it’s also a live look at every dad in 1998 after getting yet another call from Blockbuster because his kids still haven’t returned "The Sandlot" VHS six weeks after they rented it.

I’m sorry, but Kyler Murray’s throw was unreal, and DeAndre Hopkins made that play in triple coverage. It was the kind of thing you see at the end of a sports movie, not real life, and yet there it was.

The Cardinals kind of fell apart later in the season, but at least fans had that beautiful moment of grace and hope.

Sorry, I don’t really have a joke about this one, it was just a truly incredible play.

1. Danny Dimes got ahead of himself

Here it is, the king of all the plays.

I loved this moment with my whole heart. It was so pure to see Daniel Jones run so fast that he simply could not keep up with his own feet.

Because let’s face it, we’ve all been there — whether you were telling a long story at a dinner party and couldn’t land the punchline, or you were too excited about a crush and texted them too many times in a row, or when the pizza showed up and you couldn’t get to the door fast enough ... it’s human.

And it was the NFC East in a nutshell. Which was, in turn, the best manifestation of 2020 that the NFL could give us. Thanks for the chaos and the memories.

Now let’s hope next season, we can actually go to games and see these plays in person.