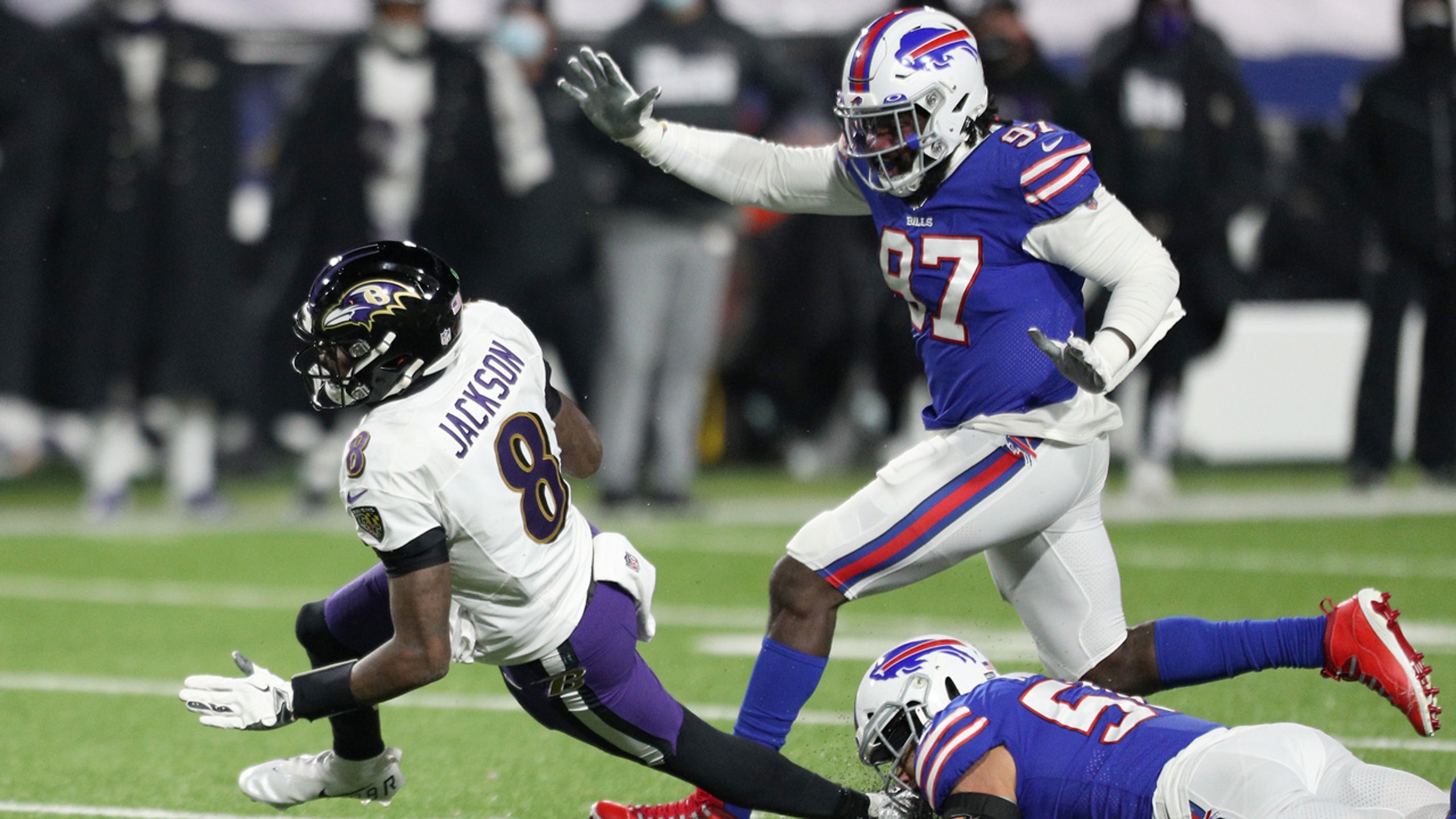 For the first time since 1996, the Buffalo Bills hosted an NFL playoff game on Saturday, welcoming Lamar Jackson and the Baltimore Ravens to their friendly, snowy confines.

Although it wasn't always pretty, Josh Allen & Co. defended their home turf, holding off the Ravens in a low-scoring divisional-round matchup that featured one epic, game-defining play.

Buffalo is headed to the AFC Championship Game – and our Nick Wright is headed for a ketchup and mustard shower, courtesy of a lost bet with Colin Cowherd.

But that's a story for Wednesday. Here are the key takeaways from the Bills' hard-fought win.

1. The trials and tribulations of Lamar

One possession in the third quarter summed up the Lamar Jackson experience.

With the Ravens down 10-3, Jackson did everything he could to get Baltimore into position to even things up, including getting the job done himself on third-and-long.

Yet on the verge of a game-tying score, Jackson threw a back-breaking, 101-yard pick-six that changed the game.

It was the first such interception of Jackson's career ...

... and it couldn't have come at a more inopportune time.

On the ensuing possession, Jackson went to the locker room following a massive hit before being ruled out for the rest of the game.

Although backup Tyler Huntley acquitted himself well over the closing minutes, that was, unfortunately, all she wrote for Baltimore.

2. Back in the running

The Bills put their faith in quarterback Josh Allen in a big way in the first half – and it didn't quite pay off.

Buffalo called one designed run through the first two quarters, tallying just 2 rushing yards on three total carries (including two scrambles from Allen). The result? A 3-3 halftime tie in front of 6,700 of the best fans in the NFL.

On their first possession of the second half, the Bills changed that.

Devin Singletary broke off two big runs (and cashed his over 2.5 receptions prop at FOX Bet along the way), opening up the offense and giving Allen the chance to find Stefon Diggs for the first TD of the game.

Of course, it didn't help the Ravens' cause that Baltimore got only two defenders out in space to defend three Bills players.

Although Buffalo finished with just 32 rushing yards, that small bit of balance in the third quarter was a big part of lifting the Bills to their first AFC Championship Game since the 1993 season.

Baltimore kicker Justin Tucker is one of the all-time greats at his position. He has also had better nights.

The Ravens dominated time of possession in the first half, marching methodically down the field on several occasions. Yet the first two times Tucker stepped up to put Baltimore on the board, he doinked the kick off the uprights.

In the end, neither missed field goal proved to be the difference, thanks to the massive pick-six.

Buffalo kicker Tyler Bass missed two kicks of his own, as the two kickers combined to go 2-for-6 on field goal attempts.

On The Move
Betting on where stars such as Deshaun Watson will land is the new trend. But how are the odds set? Sammy P asked the experts.
10 hours ago