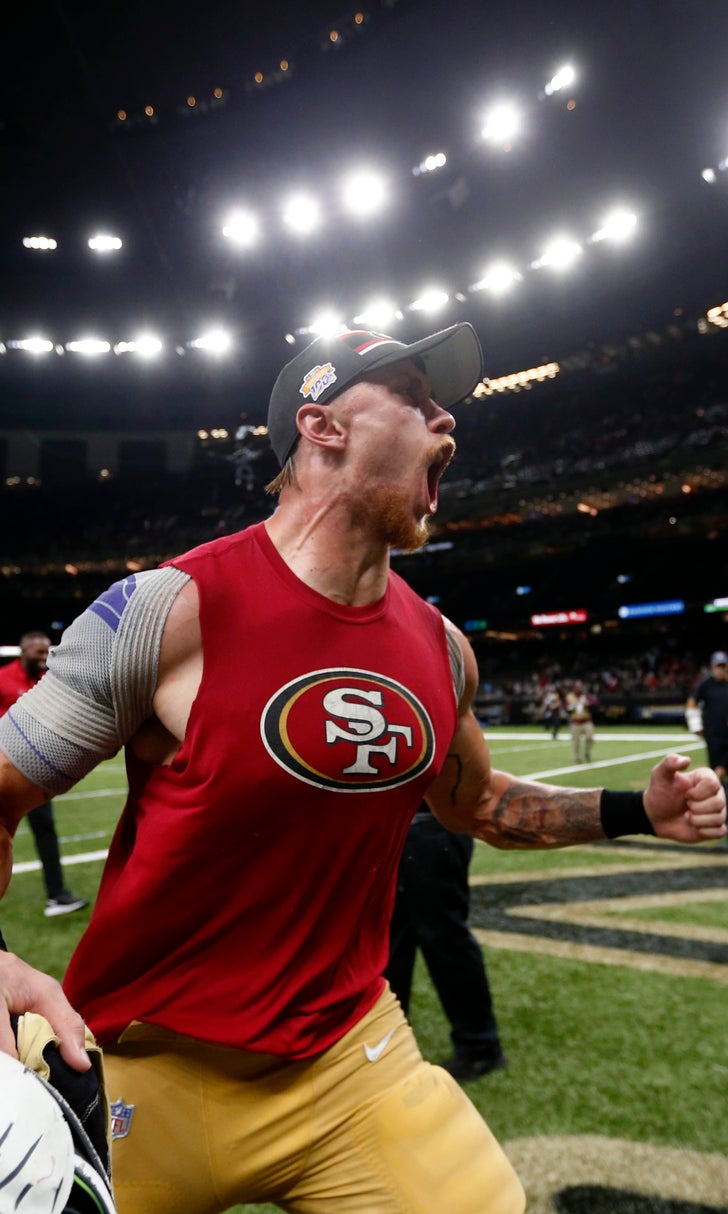 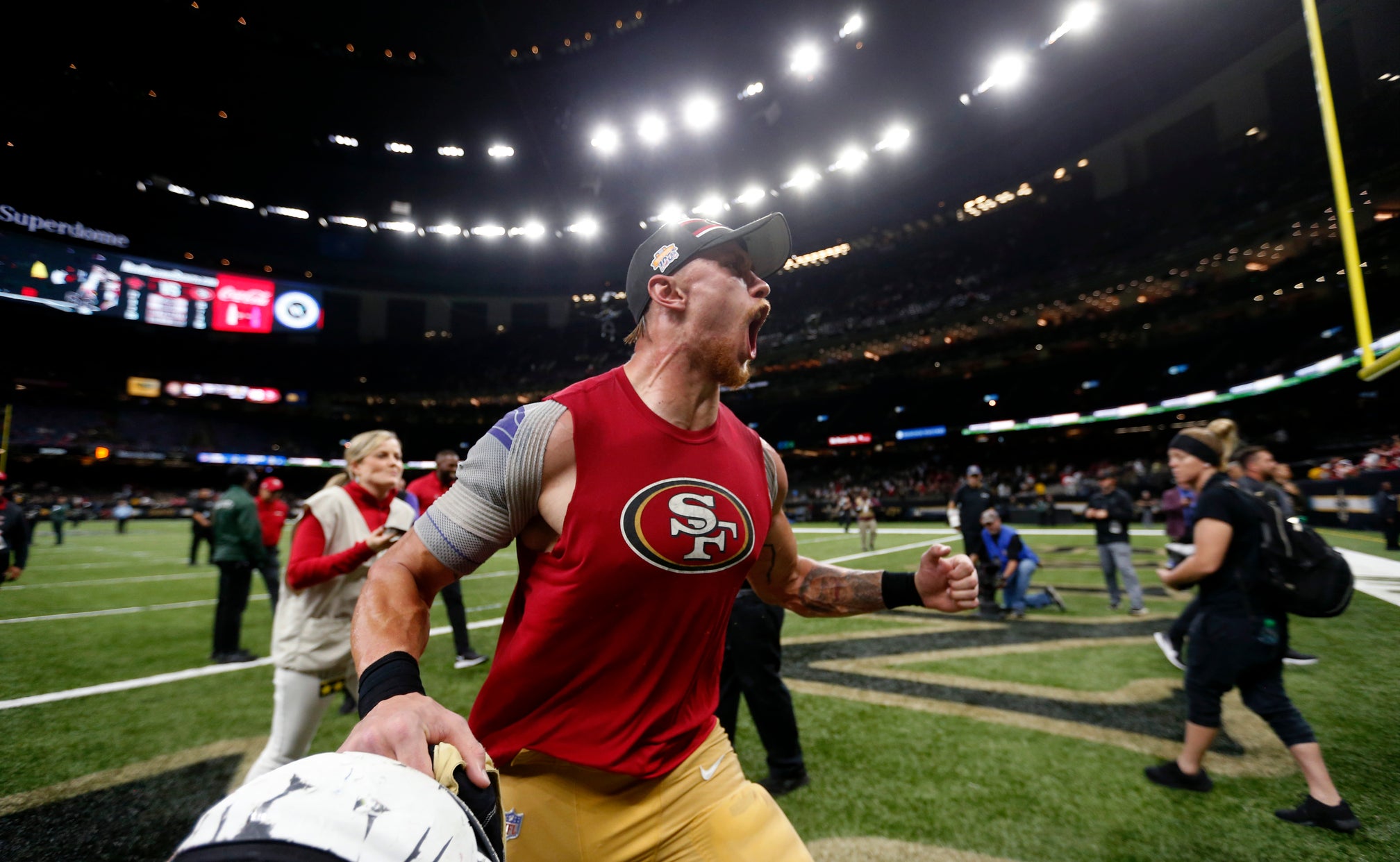 previous story
Girardi says Wheeler and Nola to be Phillies' co-aces
next story
Packers' key to Super Bowl run: Get the ball to Aaron Jones

"It's tough," coach Kyle Shanahan said Monday. "It was a huge win and we enjoyed that a ton, obviously, but yeah, some mixed feelings today with some of these injuries, which is tough. Especially losing Richburg for the year. The other guys have got some serious ones, too. Hopefully we can keep playing well so we can give them a chance to come back and help us if we can make our season longer than three games."

The win did give the 49ers (11-2) a little cushion in the NFC playoff race. San Francisco has a one-game lead over Seattle in the NFC West, as well as the Saints and Green Bay Packers in the race for a first-round bye and home-field advantage.

The Niners have already beaten Green Bay and New Orleans but lost in overtime to Seattle last month. San Francisco finishes the regular season on the road against the Seahawks in a game that could determine the division champion.

San Francisco will have to navigate the next few weeks without some important players. Richburg anchored an offensive line that contributes to the league's second-ranking rushing offense, as well as providing good protection for Jimmy Garoppolo. Ben Garland, who has started seven games since entering the NFL in 2012, will take his place.

Sherman will miss a couple of weeks but could return for the season finale after hurting his right hamstring late in the game. Emmanuel Moseley, who fared well replacing Ahkello Witherspoon at right cornerback earlier this season, will step into Sherman's spot on the left side.

Ford re-injured his hamstring after just four plays and likely won't be back until the playoffs.

Garoppolo had perhaps the best game of his career, throwing for 349 yards and four touchdowns. He hit several plays downfield, while posting a passer rating in excess of 110 for the fourth straight week. That's a feat only Steve Young had ever done in San Francisco with six in a row on the way to a Super Bowl title in 1994. The biggest play of the game came on fourth-and-2 in the final minute. Garoppolo found George Kittle just at the first-down marker and the tight end ran 37 more yards even with Marcus Williams hanging onto his facemask for a penalty. That set up the game-winning field goal.

The defense. What had been the strength of the 49ers all season struggled against Drew Brees and the Saints. The pass rush, which had been dominant all season, failed to record a sack for the first time. A secondary that went four straight games without allowing a TD pass gave up five. In all, San Francisco had season worsts by allowing 465 yards and 46 points.

RB Raheem Mostert. For the second straight week, the former special teams standout got the bulk of the work at halfback and delivered. He ran for 69 yards and a touchdown on 10 carries and also caught two passes for 40 yards and a TD. Mostert as 263 yards from scrimmage and three TDs the past two weeks.

S Marcell Harris. Harris fared well stepping in last week in Baltimore for the injured Jaquiski Tartt and delivered one of the biggest defensive plays of the game with his strip of Lamar Jackson. But Harris took a bad angle on New Orleans' first touchdown and struggled for much of the game in coverage and in tackling.

DT D.J. Jones sprained his ankle in the game and his status is unknown. CB K'Waun Williams is in concussion protocol.

5 — Emmanuel Sanders became the fifth player since the merger to have two games with a TD catch and a TD pass. He caught a 75-yarder from Garoppolo in the second quarter and then threw the pass to Mostert later in the first half. He also had a TD pass and catch in the same game a year ago for Denver against Arizona. The others to do it twice are Odell Beckham Jr., Walter Payton, LaDainian Tomlinson and Danny White.

The Niners return home to face the struggling Atlanta Falcons. Shanahan spent two seasons as offensive coordinator in Atlanta before taking over in San Francisco, helping the Falcons reach the Super Bowl following the 2016 season.

Don't Count Out The Cowboys
Fans have a chance to win $1 million this week. And Jason McIntyre believes Dallas has a chance to prove the doubters wrong.
3 days ago