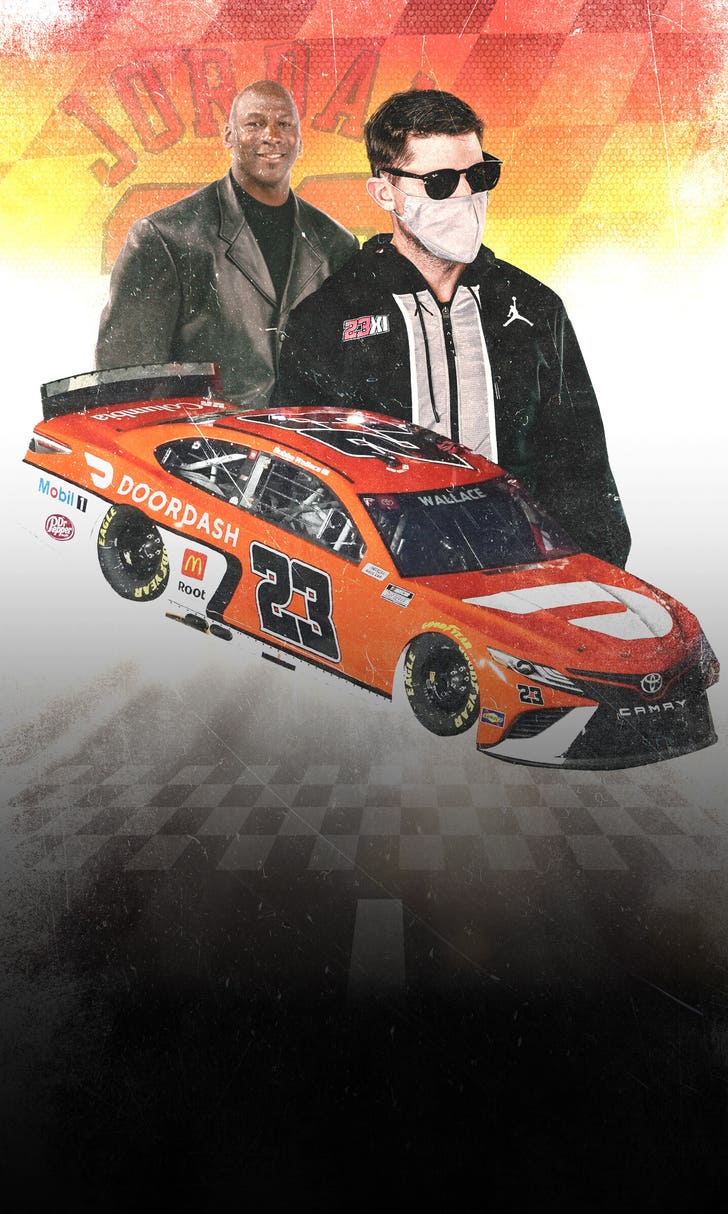 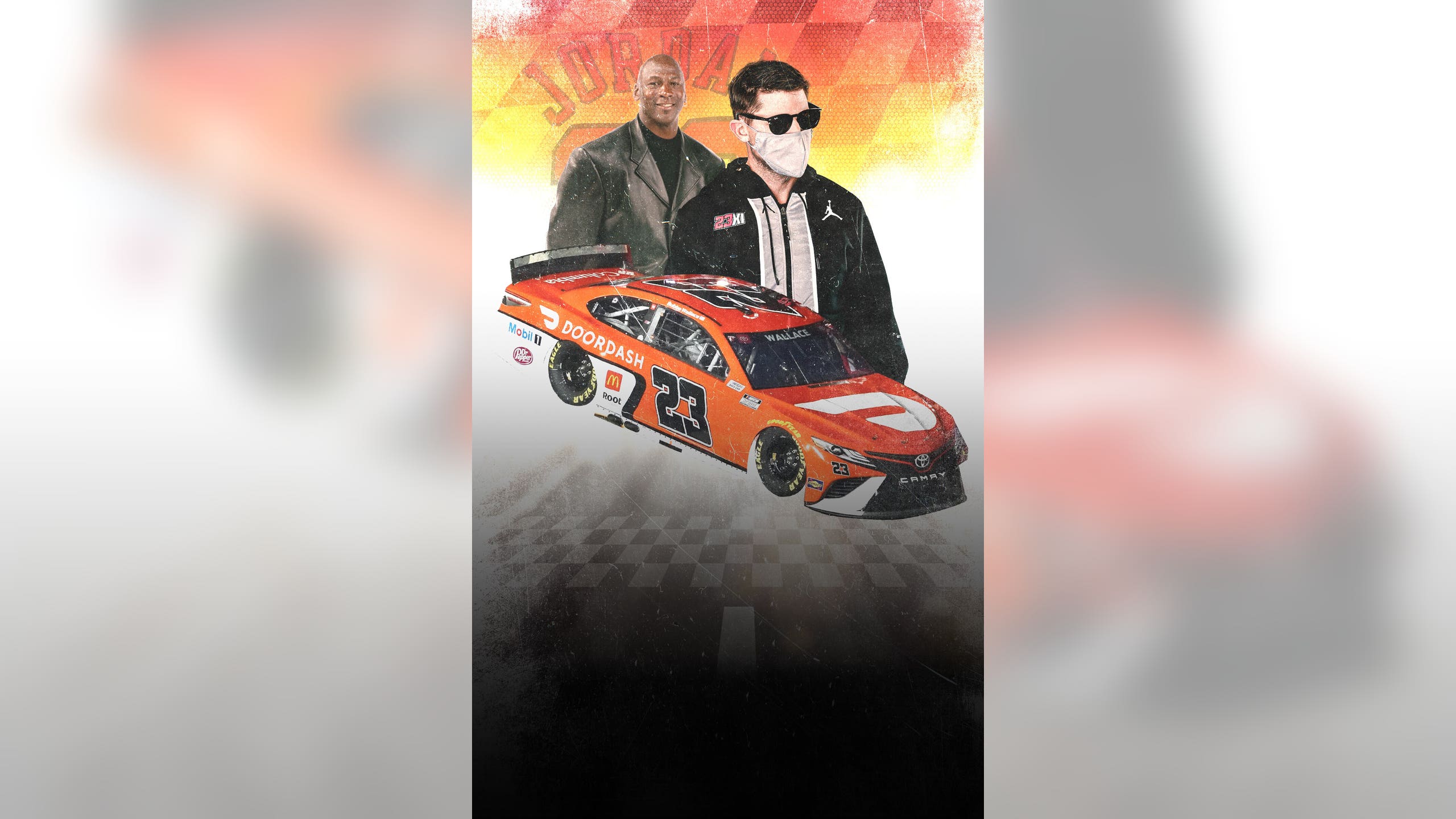 previous story
How to win $25,000 in the 2021 Daytona 500
next story
The Warriors showed Kevin Durant the love in his Golden State return
Cup Series

When the greatest basketball player of his generation — and maybe any generation — wanted to talk to Denny Hamlin at halftime of an NBA game 11 years ago, a nervous Hamlin couldn’t believe his ears.

"He was watching, I guess, the race that was a couple of weeks before," Hamlin said. "And he was asking something about some strategy that played out and was just asking me why some guys did the strategy they did.

"And my immediate reaction was, ‘You watch NASCAR racing?’ And he laughed and said, ‘Yeah. I never miss a week.’"

Hamlin knew basketball. And he probably thought he knew Michael Jordan before that meeting more than a decade ago. But he didn’t know Michael Jordan, the NASCAR fan.

In his defense, Hamlin wasn’t even 2 years old when Jordan won the 1982 NCAA title as a freshman at North Carolina and less than two months later excitedly met Richard Petty in the Charlotte Motor Speedway garage.

The love of racing ran deep for Jordan, who grew up in Wilmington, North Carolina. His father, a gearhead, tinkered with engines and even wrenched on a Cup car owned by local insulation salesman Hoss Ellington.

When Jordan played at North Carolina, one of his teammates, Brad Daugherty, wore the No. 43 in honor of Richard Petty. Now, nearly 40 years later, both Daugherty and Jordan will compete on the race track as co-owners of teams in the NASCAR Cup Series.

Daugherty has invested in a NASCAR team for more than a decade, but Jordan’s team ownership begins with the 2021 Daytona 500 on Sunday (2:30 p.m. ET, FOX), thanks to a love of racing that began at birth and deepened through conversations with his friend and now race team co-owner Hamlin.

If anyone in the NASCAR garage would strike up a friendship with Jordan, it would likely be Hamlin. OK, so he doesn’t hail from North Carolina, but he is a Southerner from Virginia. He enjoys his extravagant lifestyle, hence the high-priced, front-row NBA season tickets to see Jordan’s team play.

Hamlin can swing a golf club better than any other NASCAR driver, and he relishes a good friendly wager. That’s a Jordan type of friend.

But Hamlin rates nowhere close to MJ on the smooth meter.

Hamlin said of their first meeting: "I'm sure I was rambling some sentences that didn't make any sense or anything like that. But I just remember texting him during the second half of the game, and I'm next to my friends just thinking, like, 'What in the world? Why is he texting me in the middle of this game about NASCAR racing?'"

Hamlin saw more of that passion as he and Jordan continued with a series of phone calls and discussions on the golf course. Knowing what a Jordan relationship could bring, Hamlin lobbied to become a Jordan brand athlete. In 2011, the Jumpman logo appeared on Hamlin's uniform in what became one of the biggest stories of the Daytona 500 media day.

A few years later, when Hamlin contended for a championship at Homestead, Jordan visited the garage to support his friend. Hamlin didn’t win, but Jordan gave him a big, consolatory hug on pit road.

Now they own a race team together, a story that also has its roots in — what else? — a flurry of texts. As rumors swirled last year that Jordan would join Hamlin’s efforts to buy in to Richard Petty Motorsports, Jordan’s camp quickly denied it. But as Hamlin started looking elsewhere and a story came out errantly reporting that Hamlin and Jordan would buy RPM, Hamlin sent another text.

"There was an article that got put out saying that Denny Hamlin and Michael Jordan were looking to purchase a stake in a race team," Hamlin said. "I thought, should I send this to him or not? I don't want to rub him the wrong way, but I just sent it to him."

Hamlin sent it, jokingly saying "ha ha" about it.

"When Denny gave me the off-the-cuff comment, I seized on it and in a sense said, 'You know what? If anything possibly comes up, then I might have an interest,'" Jordan told FOX Sports in September. "I am pretty sure the wheels started turning on what his next move is going to be and ... all these synergies start to happen, and then he calls me, and he says, 'We have a chance. What do you think?'"

Hamlin flew to Florida the next day, and as things do in racing, conversations moved quickly as Jordan turned from a friend into a business partner.

Hours on the phone over the next few weeks with Jordan’s financial team resulted in the creation of 23XI Racing with Bubba Wallace, the only Black driver in the NASCAR Cup Series, behind the wheel.

"The great part of our relationship is that obviously being partners with him, he knows enough to know what he doesn't know," Hamlin said. "And racing, he's going to learn as it goes."

Jordan, needless to say, loves competition. He stressed the desire to win when talking about owning the team just after the deal closed.

Jordan will need to rely on his friend Hamlin to create that winning structure. Hamlin said this works for Jordan because of the trust Jordan has in him, and Hamlin can explain the ins and outs of the racing business and what counts as acceptable off the track, in the garage and throughout a race.

He can tell Jordan if Wallace should shoulder the blame for what looks like a driver mistake. Wallace knows Jordan will have a close eye on him, and Jordan has already delivered a message.

"He's been voicing his opinion on things and having that opinion. It's like, 'All right, it’s MJ talking.' So you have to definitely pay attention and keep your head on a swivel and know your surroundings because he's watching every avenue."

Jordan isn’t the only one watching. Anyone who has followed Hamlin’s career will watch. Ever since the Jumpman appeared on his uniform in 2011, people wondered if Hamlin really fit the Jordan brand.

The basketball GOAT knows championships, and when he signed Hamlin, the driver was coming off a season in which he finished second in points. Now, 10 years later, that still represents his best finish in the final season standings.

Hamlin has won an incredible 44 races and will go for his third consecutive Daytona 500 victory Sunday. But the championship void hovers over Hamlin, who swats away any notion that championships or lack thereof will define his career.

That pursuit of excellence evolved into this role of team ownership. Hamlin pursued it so he could stay involved in the sport in a competitive way whenever he decides to retire. Now, he and Jordan will work together as owners. They need each other.

Hamlin knows something about working with and for sports legends. His main boss, his team owner as he continues to drive for Joe Gibbs Racing, looms large as another Hall of Famer.

In navigating how to make sure Jordan has fun at the race track but also stays in his lane, Hamlin jokingly — OK, maybe half-jokingly — indicated that he will borrow a tactic his team used with Gibbs when Jordan climbs atop the pit box for a race.

"It’s just something he’s really looking forward to," Hamlin said about Jordan. "He’s making sure that he's got his own radio and all that.

"I just got to make sure we do like we do with Joe. And that's remove the push-to-talk button."

Hamlin probably already knows this, but Jordan will find a way to get his message across even without a talk button. Remember, Denny, as he told you more than a decade ago: He doesn’t miss a week.

Caution: Mum's the Word
Did Kyle Busch bring out the caution on purpose Friday night? Bob Pockrass asked. But Busch wasn't keen on answering.
9 hours ago

Playing In The Dirt
NASCAR is preparing for its first races on the Bristol dirt track and the famed COTA road course. Bob Pockrass breaks it down.
2 days ago

A New, Potent Combo
William Byron and Rudy Fugle teamed up because of their chemistry. Sunday at Homestead proved that was the right move, Bob Pockrass writes.
5 days ago

Byron's Big Day
Homestead brought the season's latest surprise, with William Byron coming out on top. Bob Pockrass breaks down his takeaways.
5 days ago
those were the latest stories
Want to see more?
View All Stories
Fox Sports™ and © 2021 Fox Media LLC and Fox Sports Interactive Media, LLC. All rights reserved. Use of this website (including any and all parts and components) constitutes your acceptance of these Terms of Use and Updated Privacy Policy. Advertising Choices. Do Not Sell my Personal Info