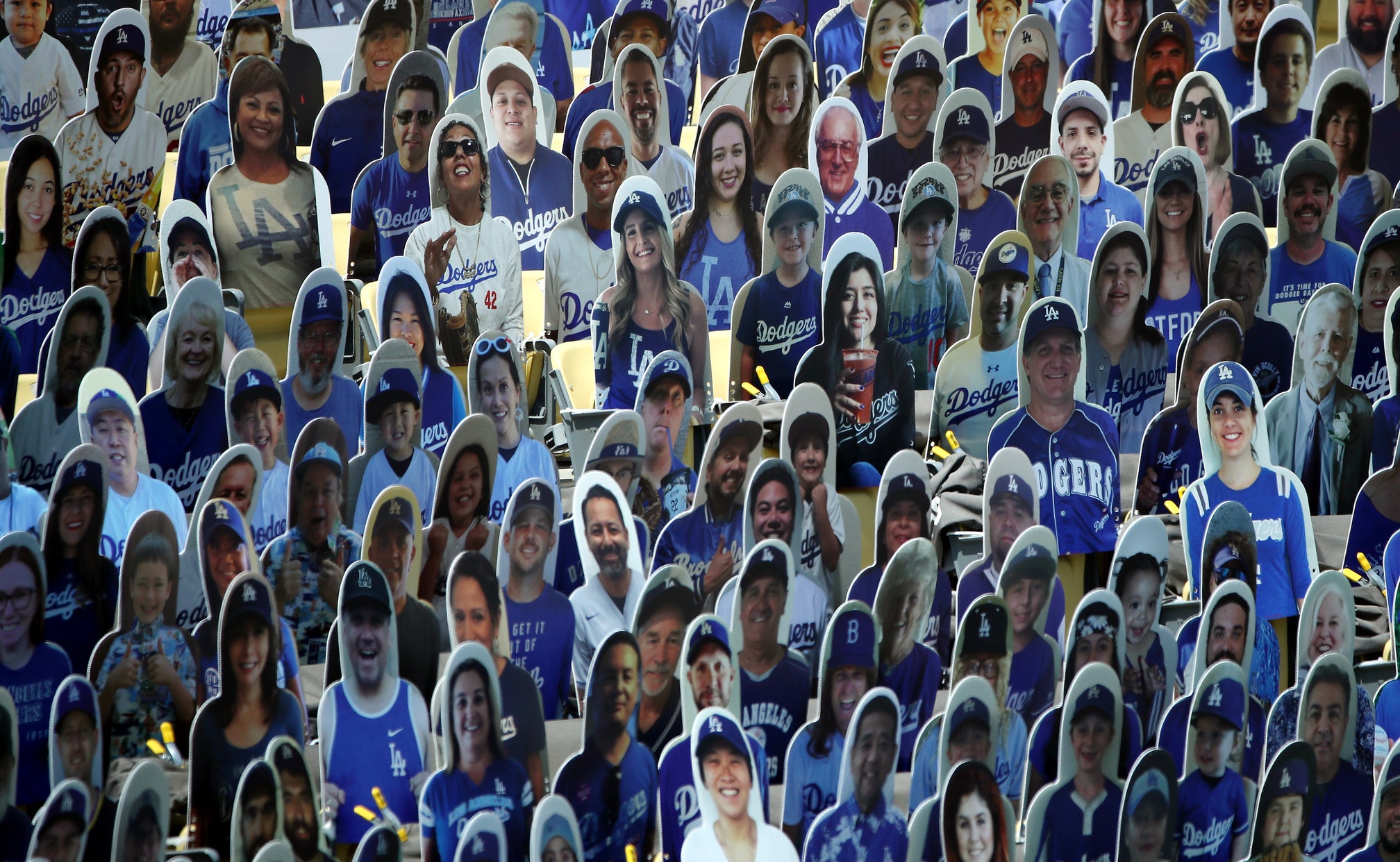 Normally, when Aaron Judge steps up to the plate, the booming beats of his walk-up song mix with the cheers of fans wearing purchased pinstripes. The chilled air smells like hot dogs and spilled beer, and the bass pulses through bodies in the Bronx. Feet crunch over peanut shells and vendors throw crinkly bags of Cracker Jacks. There’s that familiar lull between pitches while the tension — that beautiful, maddening, postseason baseball tension — grows thicker throughout Yankee Stadium until it’s released in a home run sent flying into the stands, or deflated with a strikeout.

In the 2020 American League Divisional Series, when Aaron Judge walked up to bat, it was in front of two-dimensional fans in San Diego made of cardboard.

Their expressions might have faded a little in the sun over the course of a bizarre summer spent entirely at an empty ballpark, but they never changed. The only crowd noise is artificial, and fans (of the real life variety) are relegated to their couches.

It’s like eating steak without salt, or watching a concert without being able to hear anything.

This is not Major League Baseball’s fault in any way, it’s just the nature of the beast this year. I say this every fall, but postseason baseball is religious. I grew up in a baseball family; the sport provided something American for my immigrant grandfather to feel a part of and belong to. My mother passed a love of the sport down to me the way she passed down Jewish traditions. In fact, the Jewish high holidays often overlapped with the postseason — when I was little I’d race home from Rosh Hashanah services to check the score of Red Sox games.

In 2018, a month after the Jewish new year, I took my mother to the World Series. This year, we couldn’t go to either a synagogue or a ballpark.

So much feeling and community has been stripped away that I couldn’t bring myself to celebrate the holidays, and up until this week, I’ve had a hard time watching baseball, too. Without the cut-away shots of freezing cold fans holding their hands together as if in prayer — without the guy in the stands who catches a ball with his chest rather than drop his beer — the games have reminded me of everything I love that we don’t have.

But at least we have still baseball at all, right? There was a moment there this summer, when the Marlins, Cardinals and Phillies were all dealing with COVID-19 outbreaks, that the season seemed truly at risk.

And not only do we have baseball, but recently, bits of joy have popped up in moments that carry traditional October magic as we get closer to the ALCS and NLCS. The higher-stakes games and big moments have begun to do a lot of the emotional heavy lifting.

Take Wednesday night, when Cody Bellinger robbed Fernando Tatis Jr. of a home run with a catch that has, a day later, already become a part of Dodgers lore. Brusdar Graterol threw his glove and then pointed to the sky, flipping his hat, while Manny Machado (a bat flipper himself, it’s worth noting) flipped out.

Or take Giancarlo Stanton’s five home runs across four games. Or the Rays' Randy Arozarena, who pitcher Tyler Glasnow described as being “from another planet” thanks to Arozarena’s .600 postseason batting average. Or the lovable Braves’ success. And for the love of Sandy Koufax, I’ll take all the Joe Kelly pouts we can get.

So, things aren’t all bad, and there are even a few advantages to this bizarre situation. There’s something special about having an extra week of postseason baseball during the day — as I write this, I’m watching the Marlins play the Braves on a Thursday afternoon. It’s soothing, even if it’s not the raucous occasion I want it to be and even if the game is being played in an AL ballpark in Texas.

Oh, also? In a quiet ballpark, you can hear players swear and foul balls bounce off concrete. When it’s not depressing you, there’s something weirdly funny about the punctuated stillness.

There’s also something really comforting right now, in a time when everything feels upside down, about watching Yankees fans stress over screwing up another postseason.

Normal sports frustrations are a gift at the moment. I’d usually just be heartbroken and angry that the Red Sox let Mookie Betts go as the Dodgers get deeper into the postseason, but this year I’m heartbroken, angry and grateful that I can be. Hearing people complain that there are too many home runs used to be simply annoying, now it’s an annoying privilege to listen to purists say baseball has strayed too far from the gamesmanship that comes with routine doubles.

Sure. Whatever. They’re wrong.

See? Isn’t fun to argue about that? I don’t think I’ve ever appreciated a home run more than I do this year. Without a crowd to carry the energy through a game heavy with singles, the dramatic hits help keep that buzz going for fans at home.

It’s like makeup for the stage — everything needs to be exaggerated when the audience is farther away.

I wrote this earlier this month about the NBA Finals, but it takes a little more work this year to bring the full feeling of the fan experience to sports. Especially baseball, a game that relies so heavily on the history of the parks and the intangibles that make up freezing your butt off in a hard seat at 11 p.m. in the 12th inning so much fun .

But it’s possible, and the moments of joy and devastation help. So keep up the dingers, give me all the bat flips, make the interactions as petty as possible. As we careen toward the World Series, let’s squeeze every last bit of emotion out of this beautiful, frustrating, familiar game as we can.