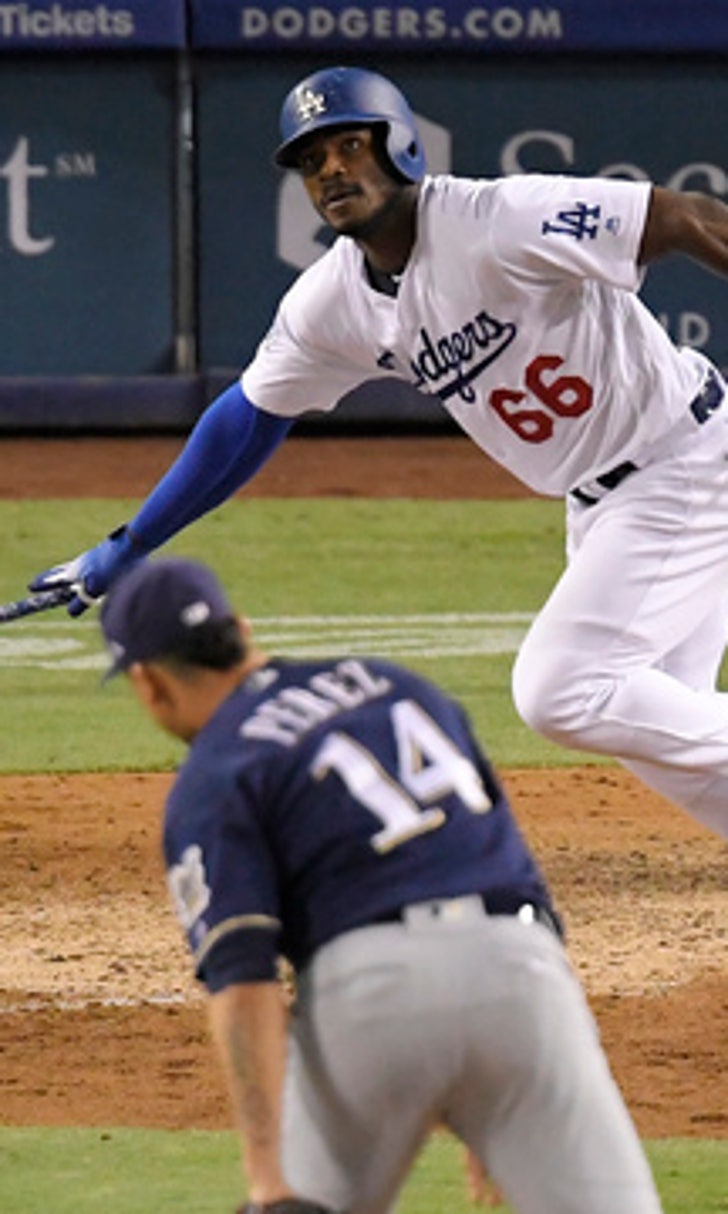 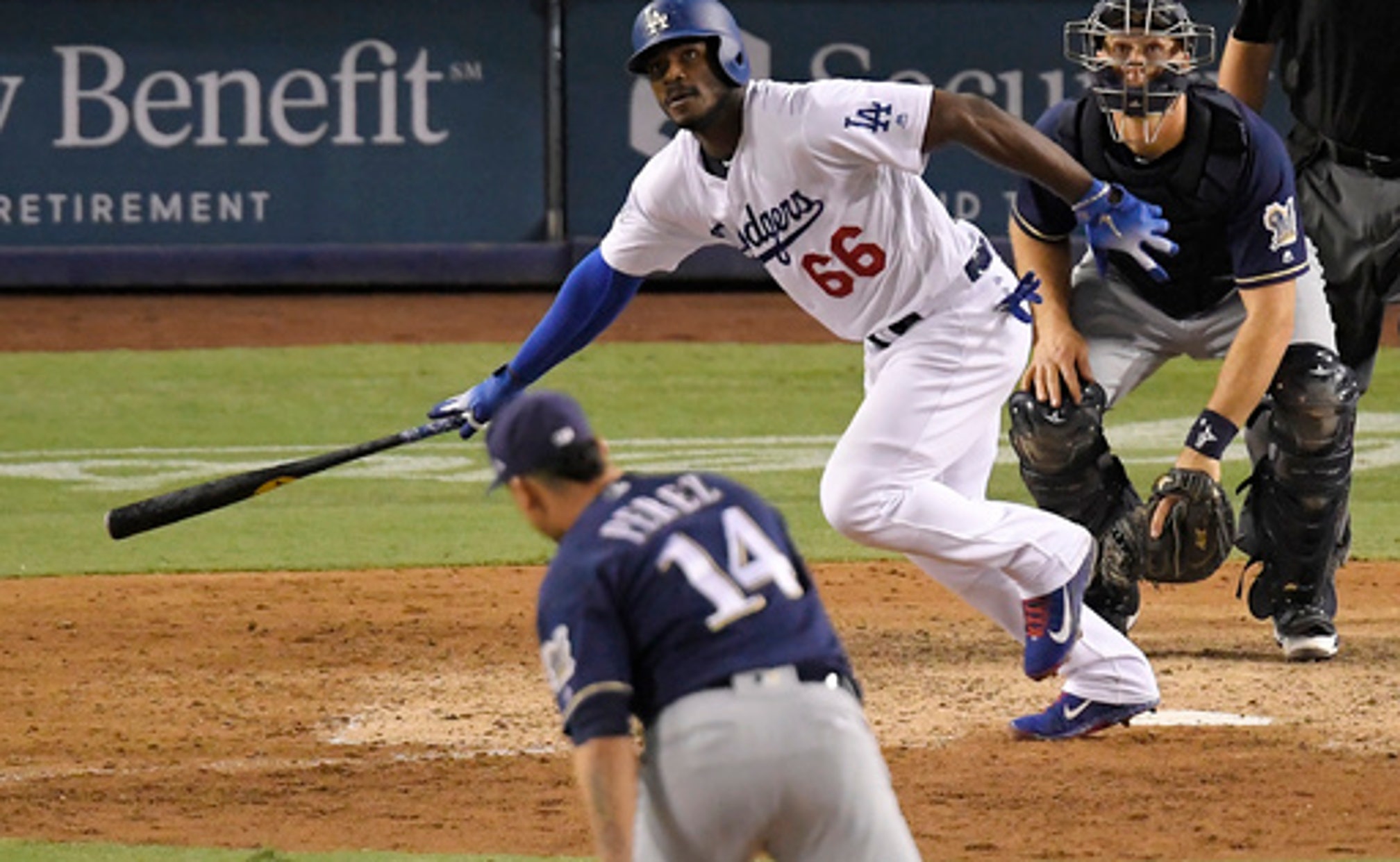 LOS ANGELES (AP) It took 56 years for Dodger Stadium to see a game like this.

Brian Dozier and Justin Turner also went deep as Los Angeles finished with its highest scoring total at Dodger Stadium. The Dodgers hit a season high-tying seven homers, and also set season highs for runs in a game, and in an inning when they had nine in the seventh.

''That is more indicative of our club offensively,'' Dodgers manager Dave Roberts said. ''You're going to have spells where you don't have hits and there will be bad at-bats when guys pitch well, but the last couple of nights, with a walk-off win (Wednesday), that can give you a shot in the arm and hopefully it continues.''

Clayton Kershaw (5-5) gave up two runs and five hits over six innings, winning his second consecutive start. He also won for the fourth time in his last six outings, while striking out seven with two walks.

Christian Yelich and Jesus Augilar each hit home runs for the Brewers, who lost for just the fifth time in 13 games. Yelich's home run off Kershaw was his 16th. Aguilar, who went deep against Dodgers reliever Erik Goeddel, hit his 26th.

But this game was all about the Dodgers' offense. The starting outfield of Pederson, Bellinger and Puig each had four RBIs. Acording to STATS LLC, the only other time that happened was in 1964, when the Milwaukee Braves' trio of Hank Aaron, Rico Carty and Lee Maye did it.

Bellinger snapped an 0-for-13 slide when he lifted a 0-1 pitch from Brewers starter Jhoulys Chacin off the right-field foul pole for his 18th of the season. It was his second grand slam this season and third of his two-year career.

''It was fun,'' Bellinger said. ''You never expect to score that many runs, but when you do, you just try to take advantage of it at the plate and I think we did a good job of that today.''

''They have a good lineup,'' Chacin said. ''I feel like they always have a good lineup and they have good guys like (Manny) Machado and Dozier. They're going to be the team to beat in the National League and hopefully we play against them again.''

Infielder Hernan Perez and catcher Erik Kratz each made his third appearance on the mound for the Brewers.

Pederson started the Dodgers' home-run binge when he led off the game with a drive deep into the seats in right field. It was the seventh leadoff home run of his career, with four of those coming this year. He added a three-run shot in the seventh to give him 16 on the season.

Puig had a solo shot down the left-field line in the fourth inning and a two-run shot in the seventh to give him 14 on the season. Dozier, who was acquired from Minnesota at Tuesday's trade deadline, hit a three-run shot to left field in the fifth, his 18th. It was Dozier's second home run in two starts with the Dodgers.

Turner hit his sixth home run after coming off the 10-day disabled list earlier Thursday. He had been out since July 22 with a strained right groin.

The Dodgers scored double-digit runs for the second time in the second half, both against the Brewers. It was the 10th time this season the Dodgers have scored 10 or more runs in a game.

The Dodgers won the season series against the Brewers 4-3 after splitting the four-game series at home.

Despite crushing the Brewers on Thursday, the Dodgers continued the theme postgame that Milwaukee is a team they could see in the postseason.

Kershaw admitted he wasn't at his best despite earning the victory over six innings, and said a relentless Brewers offense was part of the reason.

''One of these days, maybe in the payoffs, I'll figure out how to get Yelich out,'' Kershaw said. ''He's swinging the bat unbelievably right now and fortunately our bats were a little bit hotter tonight.''

Kershaw was asked about how tough the Brewers lineup would be in October.

''All the way up and down the (Brewers) lineup (there are) a lot of guys are swinging the bats,'' Kershaw said.

The Dodgers are expected to add new reliever John Axford to the active roster Friday for the start of a three-game series against the Houston Astros. The Dodgers acquired the right-hander at Tuesday's trade deadline.

Brewers: RHP Zach Davies (rotator cuff inflammation), who has been out since the start of June, will have at least two more minor league rehab starts before he returns to the Brewers' rotation.

Brewers: RHP Junior Guerra (6-7, 3.43 ERA) will take the mound at home on Friday in for the start of a three-game series against the Colorado Rockies.

Dodgers: LHP Alex Wood (7-5, 3.68) starts the opener of a three-game series against the Astros.

The One Who Got Away
He was a driving force behind the Dodgers' title. Yet Red Sox fan Charlotte Wilder can't help but be happy for Mookie Betts.
1 day ago

MLB Issues Statement On Justin Turner
The league announced its next steps following Turner breaking protocol to celebrate amid a positive COVID test.
1 day ago
those were the latest stories
Want to see more?
View All Stories
Fox Sports™ and © 2020 Fox Media LLC and Fox Sports Interactive Media, LLC. All rights reserved. Use of this website (including any and all parts and components) constitutes your acceptance of these Terms of Use and Updated Privacy Policy. Advertising Choices. Do Not Sell my Personal Info