For the first time in a long time, Drew Brees has everything Tom Brady wants

With one of the biggest free-agencies of the decade fast approaching, the hottest story for weeks has been what will become of a few all-time greats – specifically, Tom Brady and Drew Brees.

On Tuesday, Brees took his name off the free agency board.

My feelings about the 2020 season! I look forward to the grind and the journey, for the reward at the end will be worth it!!! Love you #WhoDatNation. Let’s make another run at it!

Disregard the mountain. Focus on the caption.

By returning to the Saints, Brees will make NFL history, joining the aforementioned Brady in the longevity record books.

.@drewbrees announced he will return for the 2020 season.

Brees (@Saints & @Chargers) will join @TomBrady (@Patriots) as the only QBs to play 20+ seasons for 2 or fewer franchises in NFL history. pic.twitter.com/H5HUd5cXSA

However, records are about all Brees and Brady have in common at this point. Despite Brady’s GOAT status, Brees had a pretty impressive 2019 and 2020 will probably be much of the same.

At this point, many think he’s more valuable than Brady, and that’s because Brees is surrounded with everything he needs to be successful – and much of what Brady wishes he had. 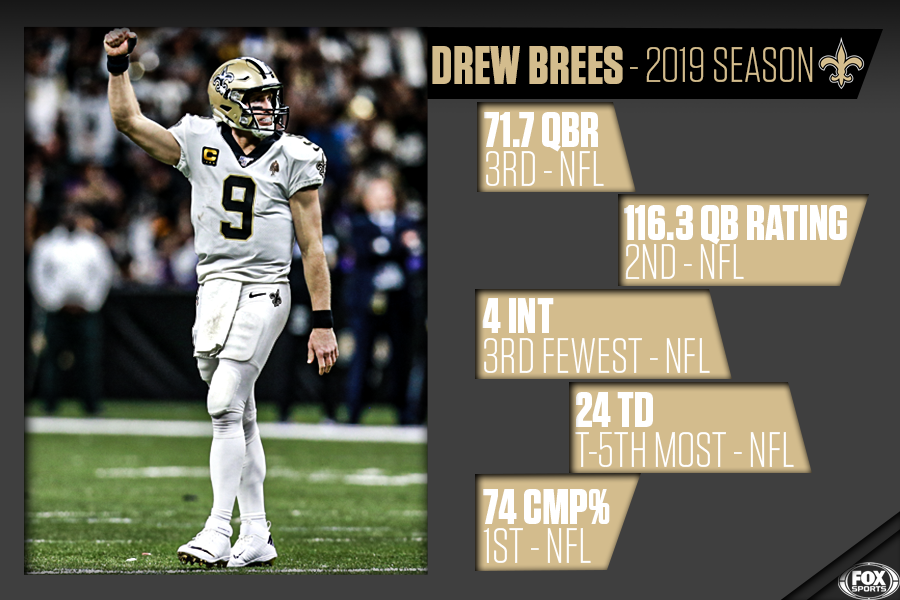 "Drew Brees has a lot left. He had a phenomenal year — 74% completion, which led the NFL, 271 yards a game, 27 TDs, 4 INTs. … The Saints are still a Super Bowl contender. Drew Brees absolutely made the right decision." — @Chris_Broussard pic.twitter.com/dyrbilEdqg

He threw for three more touchdowns than Brady, threw four less interceptions, completed a higher percentage of his passes, threw for more yards per game, and had a higher quarterback rating and QBR.

Needless to say, his teammates are excited to have their record-breaking QB back in the fold, after Brees seemed to be flirting with retirement.

9️⃣ IS BACK !!! @drewbrees pic.twitter.com/62OvMGCemR

But let’s talk about teammates.

The Saints offense is loaded. It boasts Michael Thomas, who led the NFL in receiving yards and set the record for most receptions in a single-season.

The 2019 Offensive Player of the Year is @Saints WR Michael Thomas (@Cantguardmike) pic.twitter.com/UOdXyOTbLT

"His body of work speaks for itself… They got all these shiny weapons. They got Alvin Kamara, Jared Cook & then they got Mike Thomas. And they didn't get Mikey all that money to experiment with a new QB." pic.twitter.com/EpR3hWQUcm

Seriously, look at some of these plays.

The @Saints BEST offensive plays from this past season! ⚜️ pic.twitter.com/AMz0GjNOgZ

If Drew Brees would have retired, it would have almost guaranteed Tom Brady as the all-time NFL leader in both career TDs and passing yards. Now it’s again up for grabs for another year.

Things are up for grabs, sure.

But Brees is going to grab them.

“The decision starts with where Drew is at."@Saints HC Sean Payton on where his team’s QB role stands 👇

Patriots coach Bill Belichick hasn’t shown the same love to Brady in recent years, mainly through his construction of the New England roster.

It was shameful how sorry the supporting cast Bill Belichick gave The Greatest Quarterback Ever this season.

It seems that Brady’s only chance to be successful is to ditch his longtime home and join a team with weapons already in place.

Imagine what Tom Brady, who grew up a 49ers fan, could've done with that smash-mouth 49ers line and running game, all those neglected 49ers weapons (Kittle, Emanuel, Deebo) and that 49ers' pass rush & secondary. And Belichick wanted to replace Brady with Jimmy G.

"Teams have to be wary of Brady's age. He'll be 43 — and when you fall off, you fall off quickly. Peyton had 39 TDs, 4,700 yards one year. The next year, 9 TDs, 7 INTs. They went on to win the Super Bowl but it wasn't b/c of Peyton. Maybe Brady is already there."—@Chris_Broussard pic.twitter.com/sGURgsGOVl

The Patriots also failed to reach the AFC Championship game for the first time since 2010, after winning the Super Bowl in 2019.

"Drew Brees is more valuable moving forward because I believe he has more in the tank — Tom Brady is on fumes. If I'm him, the next gas station, I'm not passing it… Don't you pass that gas station Tom!"@ShannonSharpe on Drew Brees vs Tom Brady pic.twitter.com/LSpeA27jm5

Brees – winner of only one Super Bowl –might enter fumes territory quicker than we expect, but he hasn’t just yet.

Brady, on the other hand, might already be there.

For the first time in a long time, the GOAT is looking up at the competition.