Steph Curry is still the most electric player in the NBA

Everything hasn’t been golden for the Warriors this season.

But Thursday night offered a reminder of where they were and where they still can go, in the form of Steph Curry. 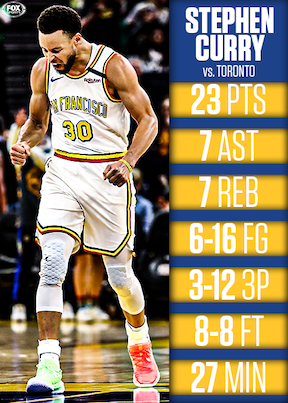 This season, injuries have taken a toll on what has been the dominant franchise in the NBA over the last half decade, causing them to tumble to the bottom of the NBA standings.

None of it mattered on Thursday.

Two-time league MVP Stephen Curry made his return to the court against the Toronto Raptors after missing the previous 58 games with a fractured left hand.

And even though the Warriors suffered another loss in his return, it didn’t take Curry long to remind the fans watching and the rest of the NBA why he is still the most electrifying player in the NBA.

Curry only made three of his 12 attempts from beyond the arc, but those three makes came in a stretch of five attempts and gave the Bay Area a glimpse of what they have to look forward to: the same, ol’ Steph.

Just being on the floor, Curry gave the Chase Center fans a reason to believe again, creating a buzz that the new arena had been missing this season.

Sound is measured in every arena.

It's partially what triggers plays for automated highlights.

I'd love to quantify how often Steph Curry whips Golden State crowds into a frenzy relative to other superstars.

The Raptors won the game, 121-113, but the Warriors looked more competitive than they had in months, and in turn, made the Chase Center feel like a true road game for an opponent.

"It was great to see Steph. … The NBA missed him. He's one of one as far as the feeling you get when you watch him. We've never had a guy like him. I was thrilled to see him back, I wish he would've come back earlier." — @getnickwright pic.twitter.com/ETWcNRP3ho

Curry’s return isn’t going to change much for the Warriors this season. They are still lottery bound and have a high chance of landing the top pick.

But what Thursday night offered was blast from the past, a look into the future, and a more normal present, all in one.

Stephen Curry scored 23 points in his first game back last night: @GottliebShow on the significance of Curry's return, and how the Warriors can reclaim the NBA's throne next season: pic.twitter.com/NxGV9wPj0D

The other half of the Splash Brothers – Klay Thompson – will return from injury next year.

For now, it’s just good to see half a splash.