The Last Dance came to an end on Sunday, but Horace Grant seems determined to have the last word.

The 10-part docuseries explored nearly every crevice of Michael Jordan and the Chicago Bulls’ rise to prominence in the 1990s, culminating with their sixth championship in 1998. But one area that was particularly fascinating was the coverage of Jordan’s relationship with his teammates — one of whom was Grant, who played alongside Jordan in Chicago for six seasons.

Initially, Grant’s most poignant moment in The Last Dance came when talking about the Bulls’ rivalry with the Detroit Pistons, after Detroit walked off the floor at the conclusion of the 1991 Eastern Conference Finals and refused to shake hands with the Bulls.

Horace Grant calling the Pistons “straight up bitches” was such a sublimely vintage 1990’s insult it made me smile. Such an underutilized insult in the 2020’s. pic.twitter.com/sUGaas47bv

But after Tuesday, that moment feels like a thing of the distant past, thanks to some two decade-old bad blood between Grant and Jordan coming back to light.

In 1992, Bulls reporter Sam Smith wrote a book entitled The Jordan Rules. In it, Smith provided inside information about the Bulls’ culture during their 1990-91 championship season. And it was revealed in The Last Dance that Jordan believes Smith gathered much of the information in the book from Grant – information that Jordan didn’t find flattering.

Grant didn’t take too kindly to the claim that he was the leak, and this week, he turned the tables on Jordan. In an interview with ESPN’s Kap & Co. on Tuesday, Grant said that although he was friends with Smith, he never divulged information about the Bulls locker room.

“Sam and I have always been great friends. We’re still great friends. But the sanctity of that locker room, I would never put anything personal out there. The mere fact that Sam Smith was an investigative reporter. That he had to have two sources, two, to write a book, I guess. Why would MJ just point me out?”

Horace Grant said it "is a downright, outright, completely lie" that he leaked information in "The Jordan Rules" book, as Michael Jordan alleged during #TheLastDance.https://t.co/vdgLPGNYdM

And there’s more. Smith is the reporter who shared the now infamous tale about Jordan not allowing Grant to eat on the team plane after Grant performed poorly in games; moreover,

According to "The Jordan Rules" author, Sam Smith, MJ wouldn’t let Horace Grant eat on the team plane if he had a lousy game 😳 https://t.co/qIs3XtCY2P

Clearly, Jordan and Grant had a tense relationship then, and that tension has stood the test of time. But what is there to make of this long-standing feud? Did the bespectacled big man deserve Jordan’s scorn, as a leak and someone who needed to toughen up? Is Grant the one holding a grudge against MJ? Or did someone like Grant need to challenge to the GOAT?

According to Smith, most of the blame belongs to Jordan, who Smith says took umbrage with teammates that stood up to him, which Grant apparently did most often.

He also said that Grant was not the lone source for The Jordan Rules.

“To suggest that one player, who was certainly not privy to a lot of things going on, can be the source of information for a 300-page book about years of a team, some of which he wasn’t even involved in, it’s just ludicrous. But Michael singled him out on the broadcast because, you know, Horace was the one who would often stand up to Michael on behalf of the players.”

Sam Smith: "When Michael Jordan sucker-punched Will Perdue in practice, Will was practically crying and didn't fight back; Horace Grant was the one who fought back. Michael didn't like that Horace wasn't intimidated by him. He's still holding that grudge." https://t.co/iSQdm8W2wj

Grant co-signed Smith’s narrative, saying that he believes Jordan still holds a grudge with him to this day because he would not back down from His Airness. 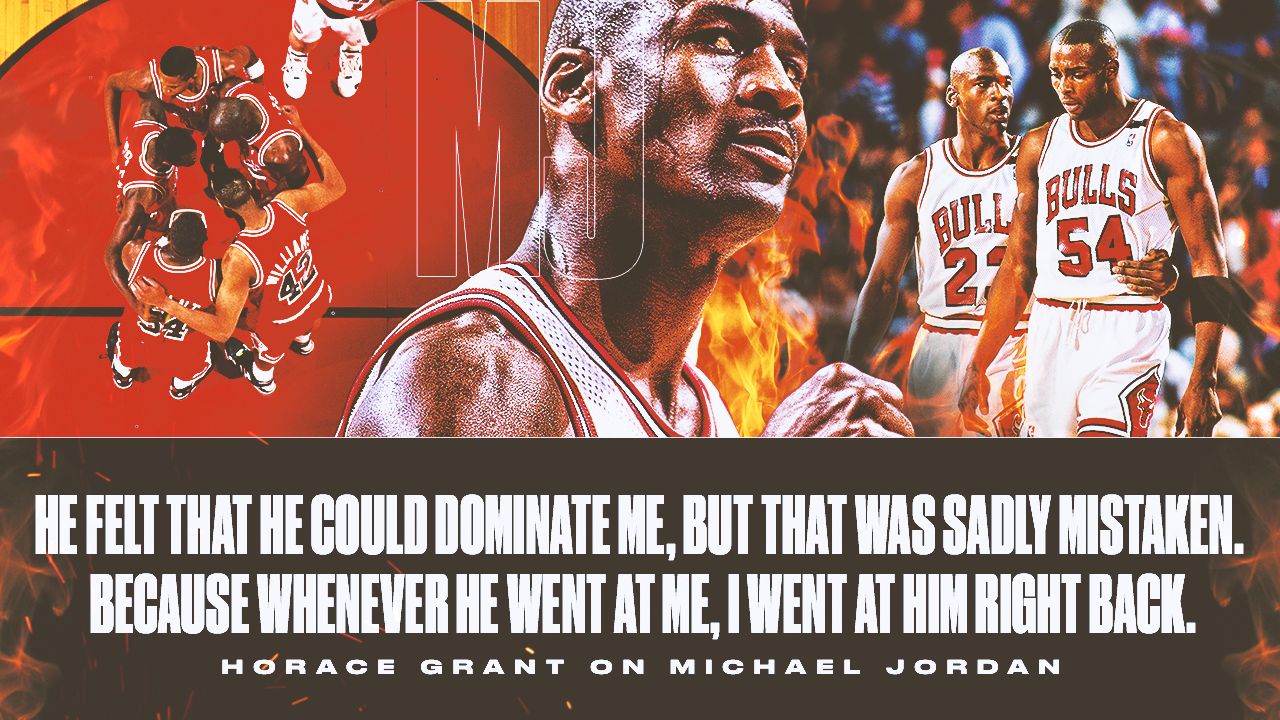 Grant and Smith could be onto something, considering this passage from a 2012 Jackie MacMullan piece that resurfaced this week, in which Robert Parish, who played with both Magic Johnson and Larry Bird prior to joining the Bulls late in his career, let Jordan know he wouldn’t tolerate his … leadership:

“In one of his first practices with the Bulls, [Robert] Parish botched one of the plays and was amused to find Jordan jawing at him just inches from his face. “I told him, ‘I’m not as enamored with you as these other guys. I’ve got some rings, too,'” Parish recalled. “At that point he told me, ‘I’m going to kick your ass.’ I took one step closer and said, ‘No, you really aren’t.’ After that he didn’t bother me.”

Everybody talking about how Jordan treated Horace Grant and Scott Burrell… this Robert Parish anecdote didn't get any run (✍:Jackie MacMullan) https://t.co/RrcI1HqMvO pic.twitter.com/ej9E4XPboU

Indeed, in his interview with Kap & Co., Grant went as far as to call The Last Dance “B.S.”, maintaining that it left out any information that challenged the narrative that Jordan was in complete control of the Bulls team — and that Jordan calling Grant a “snitch” was hypocritical, given how eager Jordan was to share the scenes he saw with the Bulls during his rookie year.

"[Michael Jordan] goes out and puts this lie out that I was the source behind [the book 'The Jordan Rules']," ex-Bull Horace Grant said. "I’m telling you, it was only a grudge. And I think he proved that during this so-called documentary."https://t.co/kQCT5tjjSC

Shannon Sharpe – who spoke directly to Grant weeks ago after the story about Jordan not allowing Grant to have team meals broke – sided with Grant, saying that he was well within his rights to defend himself from Jordan, back then and still to this day.

“A lot of people look down upon you for snitching, especially if it’s things within the team. It was like Horace was giving out family secrets and Horace is pushing back against that. I think Horace isn’t the only one who doesn’t like the way he was portrayed in this documentary. I guarantee you if you put Scottie Pippen on a lie detector test, Scottie Pippen wouldn’t like the way he’s portrayed.”

"Horace Grant said, 'Yes I was friends with Sam Smith but MJ played golf with Sam, he invited him up to his room, how do we know MJ didn't say some of these things?' The Last Dance brought up painful memories for Horace, you don't want to be labeled as a snitch."@ShannonSharpe pic.twitter.com/8PxZB1xzZi

Still, despite the evidence, not everyone is completely #TeamHorace, even if it’s a matter of semantics.

Stephen A. Smith said that while he doesn’t take issue with Grant defending his name, he does not agree with Grant that Jordan was a snitch, considering the NBA environment in the 80s.

“I don’t have a problem with him coming to his own defense about accusations that he was talking to Sam Smith … My issue is when he intimated that MJ was being a snitch … I don’t know if you all know this, but the NBA was a drug-infested league in the early 80s. Commissioner David Stern is revered … because of what he inherited and what he turned the league into.”

What also came to light in the docuseries was that the main source of Grant’s animosity towards Jordan was that during the Bulls’ championship years, Jordan received a majority of the credit. Meanwhile, Grant and others were treated as secondary pieces, according to former Bulls center Will Perdue, the same guy who admitted Jordan was a “jerk” and an “a–hole.”

In his seven seasons with the Bulls – he played with Jordan for six seasons – Grant averaged 12.6 points and 8.6 rebounds in 33.3 minutes per game.

He was Chicago’s third leading scorer behind Jordan and Scottie Pippen from the 1989-90 season to the 1992-93 season, and his best year alongside Jordan and Pippen came during the 1991-92 season, when he averaged 14.2 points on 58 percent shooting, along with 10 rebounds per game.

Essentially, he was the third piece of Chicago’s ‘Big 3’ before Dennis Rodman came along in 1995.

.@horacegrant54 and @dennisrodman both played a crucial role in the @chicagobulls' first and second 3-peats, respectively.

Here's how their stats compare during those title runs. #FOXFacts pic.twitter.com/Wg0Ge3uS0a

Grant was indeed important to the Bulls lineup during the early 90s. But, he certainly wasn’t in the same stratosphere as Jordan, and he is not as highly-regarded as Rodman. Because of that, some believe that he might be the one holding a grudge towards MJ all these years later, not the other way around.

For Bomani Jones, the fact that Grant has been accused of being the leak in Sam Smith’s book for decades is telling.

i get why horace is mad, but people have put the weight of "the jordan rules" sourcing on him for almost 30 years. https://t.co/cf5IvtaFAE

And in another peculiar twist, just days ago, Grant labeled Jordan as one of his all-time favorite players in an AMA – Ask Me Anything – segment on Reddit.

here's the thing with the whole Horace Grant situation I don't understand … only four days ago, he was on Reddit doing an AMA (https://t.co/QFpiNHkL0g) and answered Michael Jordan as one of his "favorite players"

different interpretation of the question??? pic.twitter.com/wUNe14WzPx

But then again, that’s always been part of the legend of Jordan. Those who had to deal with him during his prime can’t help but hate how much they respect what he did for them. His tenacity led to shared championships — and shared animosity.

Did Jordan bully Grant? Did Grant feel like he was sticking up for himself and his teammates?

Either way, here’s to hoping they both have a few more things to say.