Ranking the 25 most impressive players of bowl season

With 2014’s bowl season in the books, let’s take a look back at the most impressive performances from the 38-game slate:

Brian Kelly knew what he was doing when he gave Zaire the Music City Bowl starting nod over incumbent Everett Golson. The Fighting Irish held the ball for 37 minutes against the SEC’s toughest defense thanks in large part to Zaire’s punishing runs (22 carries for 96 yards and a touchdown) and quick throws (12 for 15 for 96 yards and a touchdown). Kelly should feel comfortable heading into 2015 if Zaire is his guy.

Perkins stole the show in what could’ve been Brett Hundley’s final college game. The redshirt sophomore ran wild against Kansas State in the Alamo Bowl — his 194 rushing yards cut up a normally stout Wildcats defense. Perkins sealed the win with his second of two touchdowns, a 67-yard scamper, and an onside kick recovery when K-State closed the gap.

Bates had himself a time against a familiar foe at the Heart of Dallas Bowl. The Bulldogs’ pass rusher toyed with his former team, Illinois, after transferring from Champaign for 2014. He notched 4.5 sacks and earned MVP honors against the Illini.

The Wildcats chipped away at their 31-6 halftime deficit at the Alamo Bowl by going to Lockett over and over. The speedster with K-State bloodlines — his dad also played at for Bill Snyder and the Wildcats — tore apart UCLA with 13 catches, including two scores and a two-point conversion. They’ll miss him in Manhattan next season.

Maybe Boykin’s post-Peach Bowl accessory — a championship belt — will foreshadow things to come for TCU. The dynamic dual-threat quarterback dissected Ole Miss to the point where his three interceptions were meaningless. He only missed nine of his 31 throws and accounted for four scores against the SEC’s top scoring defense. 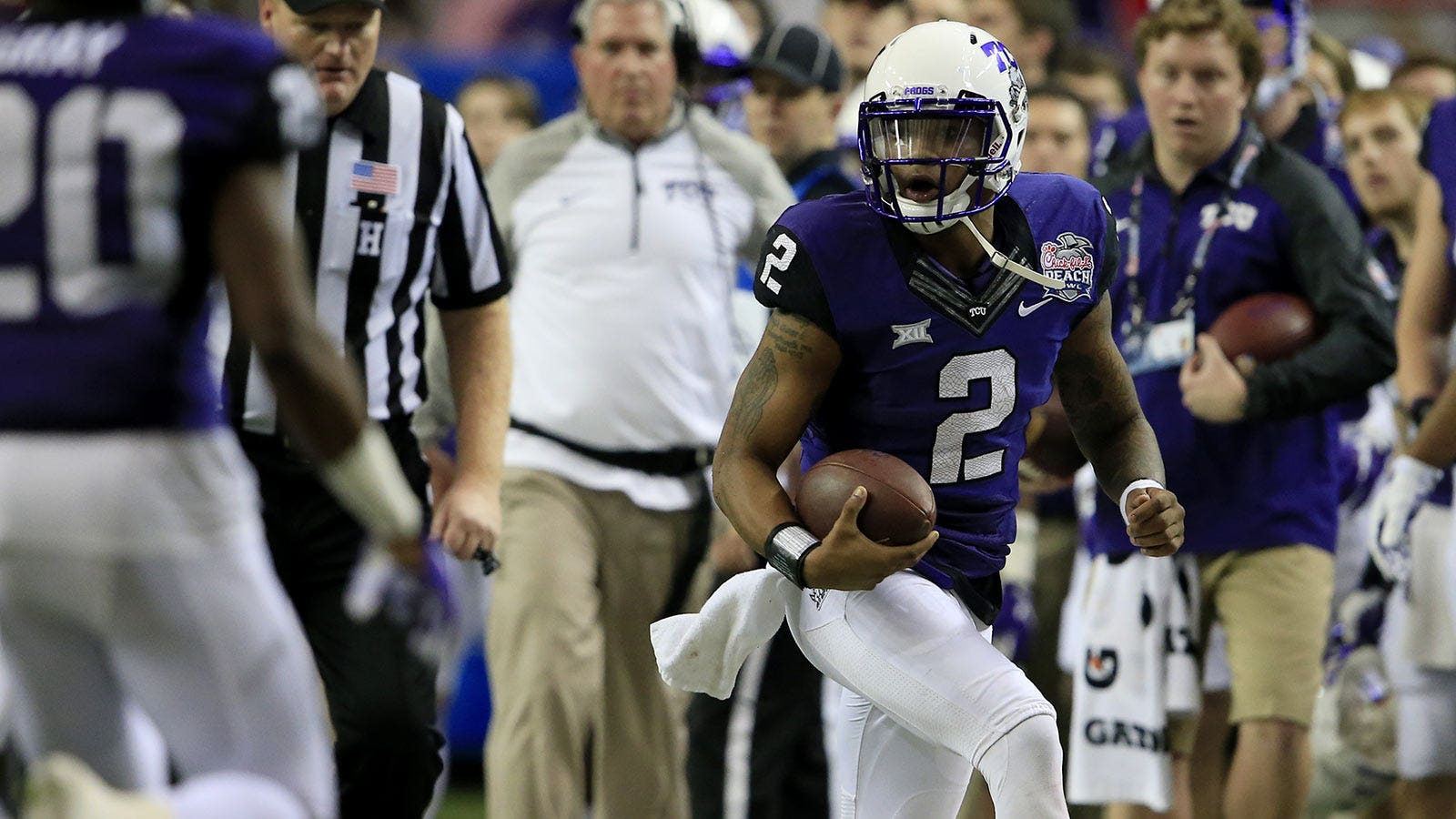 Don’t discount what Carrington was able to do to Florida State in the Rose Bowl. The Seminoles sported a secondary with NFL-caliber players, and the redshirt freshman ran by all of them for 165 yards and two big scores. Carrington being suspended for the national championship game mean Marcus Mariota will need to find a new favorite target.

No bowl player was forced into a tougher circumstance than Jones. After helping down Wisconsin 59-0 for the Big Ten title, his reward was a Sugar Bowl meeting with Alabama in his second career start. It took him a little while to get going, but when he did, Jones not only beat ‘Bama — he carved them up. He ended the night with 243 passing yards, 43 rushing yards, and a whole lot of confidence heading into next week’s title bout with Oregon.

The Red Wolves had no answer for Toledo’s rocket at running back. Kareem Hunt rewarded college fans who stayed up late on Sunday with a 271-yard, five score night that lifted his team above Arkansas State in the GoDaddy Bowl. And with that one monster night, Hunt moved from No. 26 in the nation in rushing all the way up to No. 9.

South Carolina will field the SEC’s most explosive wide receiver next season. But for his 2014 finale, Pharoh Cooper roasted the Hurricanes’ secondary with nine catches for 170 yards and a touchdown. His last grab, a magnificent, leaping 25-yarder over a defender, helped the Gamecocks seal an Independence Bowl win. 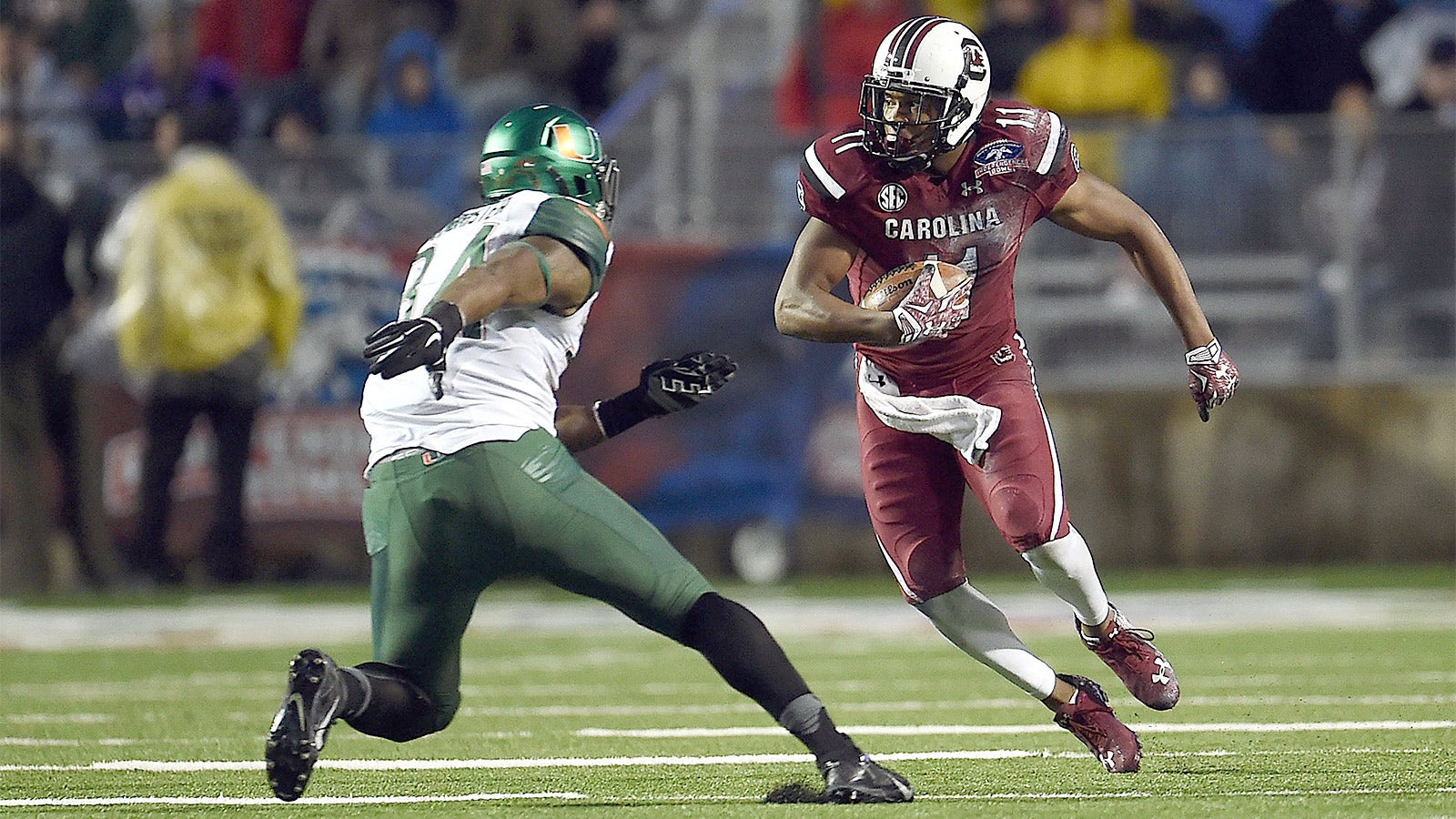 A 29-point fourth quarter deficit is no problem if you’ve got Greenberry on your side. The Cougars looked to their star receiver for help against Pittsburgh in the Armed Forces Bowl, and with two touchdowns and a game-winning two-point conversion, Greenberry sure delivered.

The Tigers ended up wasting not one, but two double-digit leads against BYU in the Miami Beach Bowl. It didn’t matter — Paxton Lynch kept scoring for Memphis and the Cougars couldn’t stop him. The redshirt sophomore accounted for seven touchdowns (four passing, three rushing) in a double-overtime win.

The Birmingham Bowl was just a coronation for Dante Fowler Jr.’s rising NFL draft stock. Pro scouts were treated to a show against ECU as Fowler notched three sacks, two quarterback hurries, and a clutch pass deflection late in the game that ended a Pirates comeback bid. Not bad for a Gators player with one foot already out the door.

The senior Spartan closed out his career in East Lansing with a Cotton Bowl for the ages. None of his three scores were from more than two yards out, but he sliced a talented team for 162 yards. The performance lifted Langford to fifth on MSU’s all-time rushing list.

The Broncos were up to their old tricks in the Fiesta Bowl, so naturally, their running back was the focal point. Jay Ajayi scored on a Statue of Liberty play, and then notched two more scores en route to a 134-yard night against Arizona. 105 of those rushing yards came after contact.

This is what the Nittany Lions had in mind when they brought Hackenberg to Happy Valley. The standout sophomore smoked Boston College in the Pinstripe Bowl with four scores in an overtime win. Hackenberg became one of PSU’s greats at Yankee Stadium, setting school records for completions (34) and passing yards (371).

Marcus Mariota got all the attention as the reigning Heisman champ, but it was Washington who took home Rose Bowl MVP honors. He deserved the title after leading the Ducks’ defensive charge against Florida State’s power running game. And the cherry on top came in the third quarter, when Washington returned Jameis Winston’s fumble and effectively sealed an Oregon win.

Rush made the inaugural Bahamas Bowl a game for the ages. The Chippewas passer accounted for seven touchdown tosses, but a botched two-point play couldn’t prevent the loss. His counterpart, WKU’s Brandon Doughty, deserves some praise for his five-score night, too.

What Dawson did to the Ole Miss Rebels in the Peach Bowl was not pretty. He was all over the field, accounting for eight tackles and a sack as he wreaked havoc against Bo Wallace and Co. The game got out of hand thanks to Dawson’s efforts on third downs, where the Rebels went 3-for-15 on the night.

Call Petty a system quarterback all you want. Just don’t call his 550-yard performance against Michigan State’s defense anything but impressive. It’s a shame Petty had to watch from the sidelines as a Cotton Bowl win slipped away from the Bears in the fourth quarter.

The clubhouse favorite for the 2015 Heisman Trophy will play his second year of ball in Baton Rouge next fall. Fournette simply outclassed Notre Dame in a losing effort. He tallied 143 rushing yards on just eleven carries with two rushing scores, and then added on a 100-yard kickoff return touchdown for good measure.

Coach Sark has a fun freshman returning to Southern Cal next year. USC should love its chances with its human joystic in the fold. Jackson made sure the Trojans held on against Nebraska in the Holiday Bowl with a blazing 98-yard kickoff return to the end zone on top of his 71-yard scoring catch. 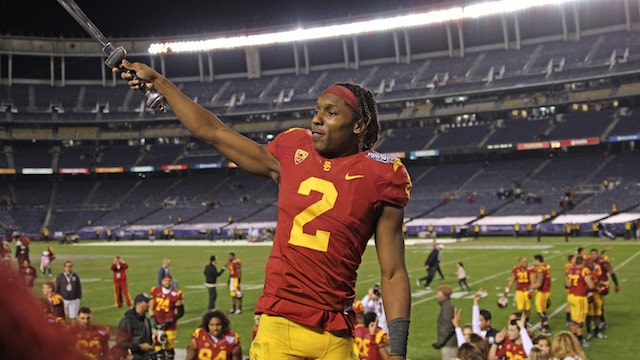 College football’s top back saved his best for last in Tampa. Auburn’s defense looked dumbfounded on his second of three touchdowns, a 53-yard tote on which he sped right by several Tigers defenders. It was like that for most of the afternoon. Gordon set an Outback bowl record with 251 rushing yards on 34 carries.

Bulldogs fans are drooling over the potential of Nick Chubb, who ended 2014 with a stat line that compared favorably to those of Herschel Walker. Chubb will return in 2015 looking to build on his breakout Belk Bowl, where he wore down Bobby Petrino’s Louisville team. He went for 266 yards on 33 punishing carries against the Cardinals in Charlotte.

The Rose Bowl started off with an uncharacteristic Mariota mistake: an interception thrown to the middle of the field. But he rebounded in typical fashion and made Florida State’s talented defense look like amateurs. The reigning Heisman winner will look to build off his two-touchdown, 338-yard game in Pasadena with another memorable outing vs. Ohio State on Jan. 12. 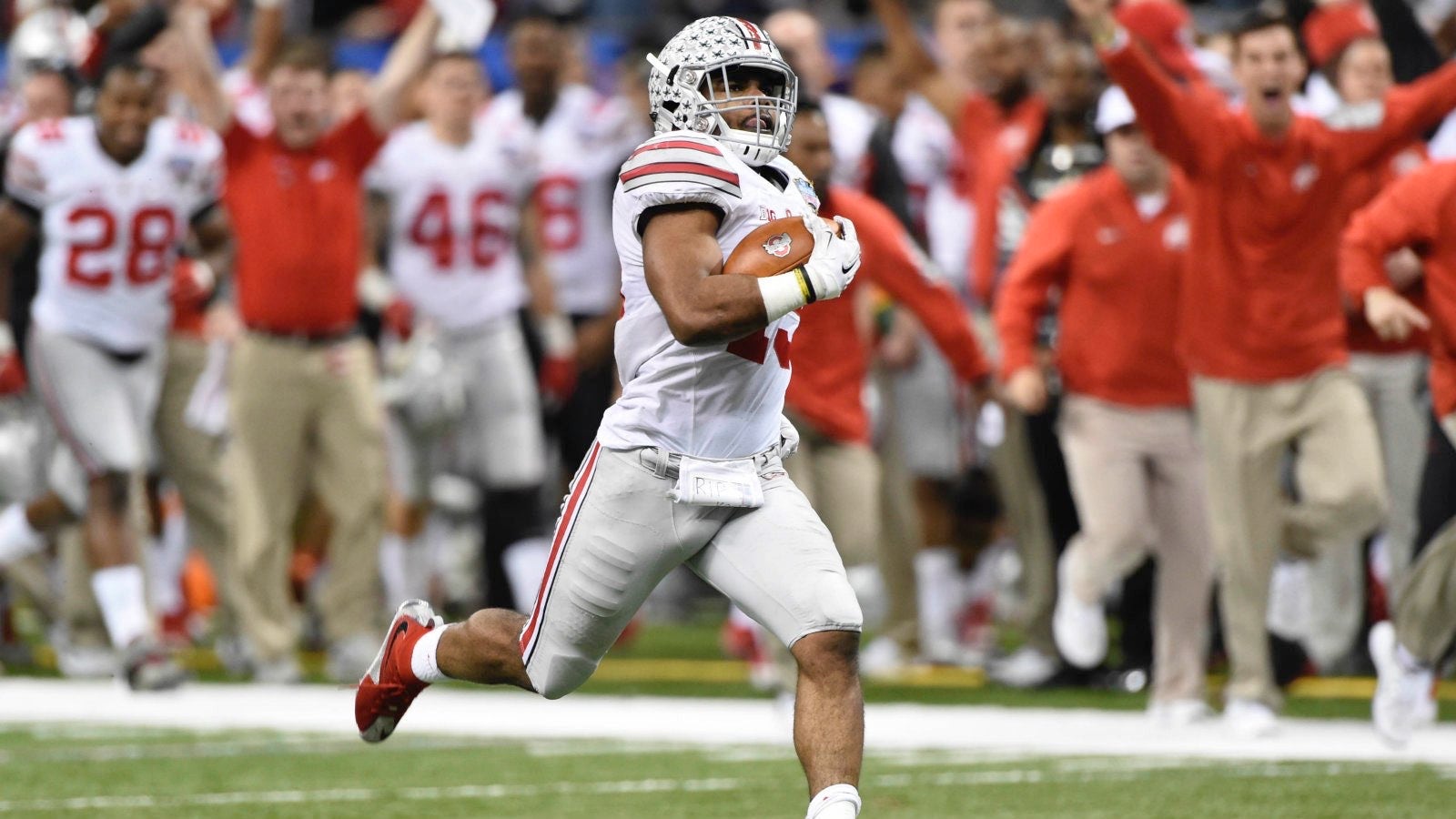 The Buckeyes rode Elliott all the way to North Texas for a showdown against Oregon. He ripped open Nick Saban’s ballyhooed defense for 230 backbreaking yards. More importantly, he found the end zone twice, including an 85-yard fourth-quarter run that put the game out of reach.