Many things distinguish college football from our country’s other major sports. One of them is its fans’ constant clamor to fix a postseason that does not seem particularly broken.

There are too many bowls. The selection committee is a joke. And of course, the playoff we spent decades pining for now does not have enough teams in it.

All that for a sport that’s managed to remain incredibly popular despite all its apparent flaws. As one industry source put it Wednesday, “Many other sports would kill for the ‘problems’ of college football.”

On Monday night, Clemson and Alabama closed out the third edition of the College Football Playoff with one of the most dramatic national championship games the sport has ever seen. To the surprise of some, ESPN’s viewing audience that night declined slightly, from the 26.7 million that watched the same teams’ meeting a year ago to 26 million this year. Neither number approached the stratospherically high 33 million who watched the first-ever playoff championship game (Ohio State-Oregon) two years ago.

Leaders within the sport don’t seem particularly concerned. In fact, on Wednesday morning the board that governs the CFP announced a three-year contract extension for executive director Bill Hancock.

During my stay in Tampa, I spoke with numerous commissioners, ADs, coaches, players, bowl executives, TV executives and other industry officials. The consensus vibe was that of overwhelming satisfaction with the system they created four-and-a-half years ago. In nearly every key area it has met or exceeded their expectations.

Not coincidentally, I sense zero appetite across the sport for an eight-team playoff. Before the CFP started, I predicted the system would expand halfway through ESPN’s 12-year contract. I was wrong. There’s even less support for the idea now than there was then.

For one thing, power brokers on both the playoff and TV side are pleased with the positive effect they’ve seen on the regular season. The BCS first helped turn the traditionally regionalized sport into a more national model; the CFP has only enhanced that.

In particular, the intense focus on the four-team race once the committee starts producing its weekly rankings in early November has raised the stakes for games that previously might have flown under the radar. Think Pittsburgh-Clemson or USC-Washington this year or Oklahoma State-Baylor the year before.

Conversely, there were many seasons in the BCS era where the national focus narrowed late in the year to mostly the Nos. 1 and 2 teams.

And while eight-team proponents might argue that an expanded format would cast that net even wider, those within the sport don’t see it that way.

Based on numerous conversations with ESPN execs in recent years, the playoff’s TV partner feels the same way. Yes, it’s got a $7.3 billion investment in the CFP, but it’s spent even more billions than that on rights deals with the five power conferences. And they’re contingent on the stakes of all those regular-season showdowns remaining the same.

Another big bet the commissioners made when establishing the playoff was that the public would embrace the selection committee model after an eight-decade history of pollsters (and later computers) ranking teams.

Fans and media (myself included) have spent the past three years parsing committee chairmen Jeff Long’s and Kirby Hocutt’s every word to decipher their thought process. And no one would dispute it’s been frustrating and confusing at times.

This year, of course, brought the system’s first big controversy — 11-1 Ohio State getting in despite losing to 11-2 Big Ten champ Penn State, which did not get in. Hocutt said numerous times in defending that decision that the Buckeyes simply had a better body of work. (Ohio State in fact finished No. 3, ahead of 12-1 Pac-12 champ Washington as well).

Many at the time felt the committee set a precedent for devaluing conference championships, which, if true, would seemingly contradict the criteria the founding commissioners laid out for them. And Clemson’s subsequent 31-0 blowout of the Buckeyes in their Fiesta Bowl semifinal game gave critics further fodder.

But all five commissioners have since been asked about the situation. Only the Big 12’s Bob Bowlsby — whose champ has missed the field in two of the system’s three years — expressed any concern with the committee’s decision.

“I’m satisfied with it,” said ACC commissioner John Swofford. “I like the conference champion being the priority. I don’t think that’s been lost. There was a particular set of circumstances in the Big Ten that the committee had to evaluate, and they came out where they came out.”

The more troubling storyline for the sport this postseason was the unprecedented decisions by two stars, Stanford’s Christian McCaffrey and LSU’s Leonard Fournette, to leave their teams and begin their professional careers prior to their teams’ bowl games. Opinions varied across the sport, with some coaches in particular bothered by it, while others were supportive.

All could agree, though, that it demonstrates how devalued the likes of the Citrus and Sun Bowl have become in the modern era. And many, most notably Alabama’s Nick Saban, blame that in part on the sport’s overwhelming focus on the playoff.

Hancock and others understandably disagreed with his opinion. The truth is a multitude of factors – the old BCS system, the two-decade doubling in the number of bowls and the inclusion of 5-7 teams, among others – contributed to the current landscape.

Average attendance for the 40 bowls (not including Monday’s championship game) decreased about 5 percent year over year, with many suffering from historically low attendance figures (the Georgia Tech-Kentucky TaxSlayer Bowl drew the Jacksonville game’s smallest crowd since 1958) or disappointing TV ratings (the Stanford-North Carolina Sun Bowl was CBS’ lowest-rated since 2007).

Needless to say, the middle- and lower-tier bowls have seen better days.

The news was more positive, however, for the New Year’s Six bowls, which collectively averaged a 9.0 overnight, up 8 percent from last season. The two semifinals averaged nearly 20 million viewers, up 24 percent despite remaining on New Year’s Eve (this time a Saturday) and despite the Ohio State-Clemson blowout.

The commissioners announced last summer they would no longer try to “change the paradigm of New Year’s Eve in this country” and that all future semifinals would be played on either a weekend or national holiday. Next year’s games return to the Jan. 1 Rose and Sugar bowls.

Finally, give the folks in charge credit for achieving one particular vision. When I first interviewed College Football Playoff COO Michael Kelly in 2014 for my book about the playoff, he spoke of turning the sport’s new national championship game (the first to be played outside of the traditional bowl system) as “a hybrid” of the Final Four and Super Bowl.

This year’s game in Tampa felt like exactly that. Unlike initial sites Arlington, Texas and Glendale, Arizona — where events were spread out across large metroplexes — fans, media and industry folks all seemed to congregate in downtown. Media Day was at Amalie Arena, a fan fest at the adjacent convention center, concerts (with acts like Usher and Flo Rida) at a nearby park. Many of us stayed at hotels within walking distance of everything but Raymond James Stadium itself.

Expect a similar setup next year in Atlanta.

Mind you, the staggering costs involved did not exactly make the game accessible to the common fan. Even the lowest-priced tickets on sites like StubHub were approaching $2,000 by kickoff. But that was due mainly to the fact that both schools were within driving distance of Tampa.

The game itself broke a stadium record for attendance at 74,512. Not bad given it’s hosted two Super Bowls.

Of course, if the playoff ever does expand beyond four teams, most expect the early-round games would move to the participants’ campuses. That’d certainly be easier for fans of the host teams. Not so much the players.

“If we had to do another game after this? God, no,” Clemson linebacker Ben Boulware said last week. “I’d literally die.”

Boulware played his final college game Monday night. But based on the temperature of the sport today, at least nine more years of college players won’t have to worry about yet another playoff game.

Four feels more entrenched than ever before. 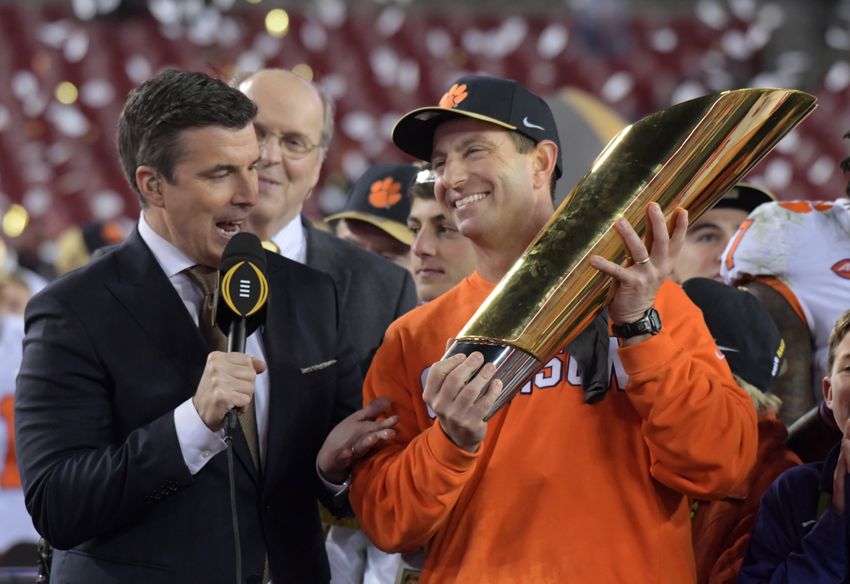 Gallery: Ranking all 41 of this season's bowl games based solely on excitement level