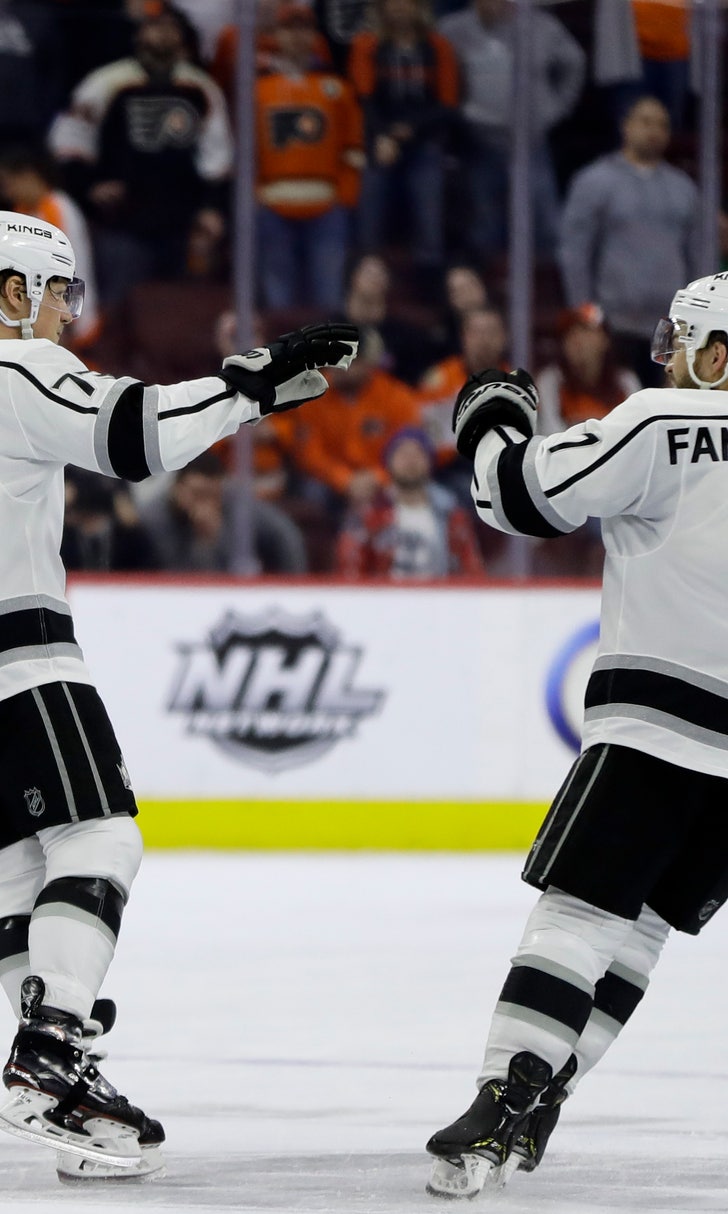 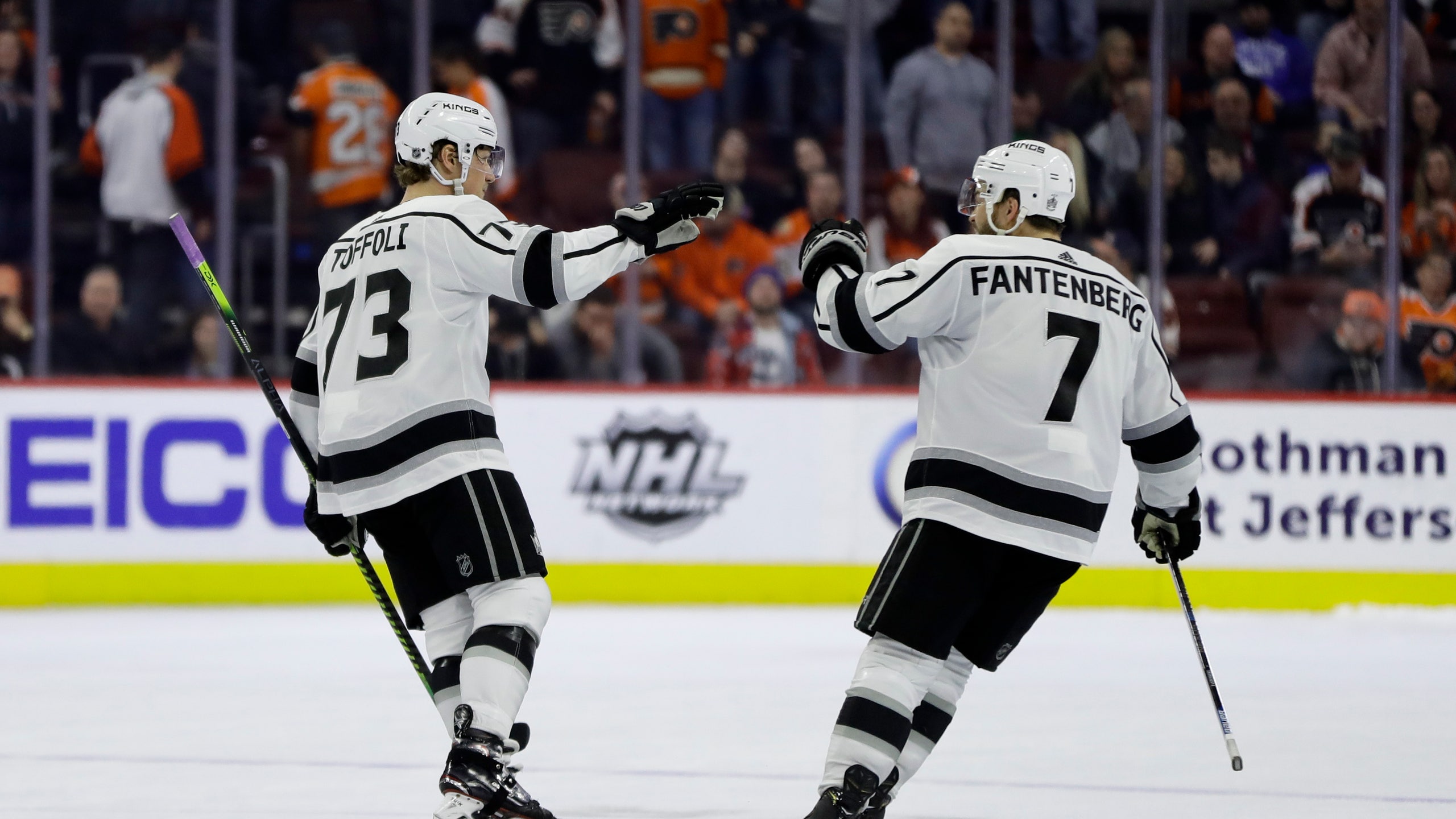 previous story
Durr leads No. 2 Louisville to 76-51 rout of No. 15 Orange
next story
Marchessault scores 2 to lift Vegas over Detroit 4-2

PHILADELPHIA (AP) — The Los Angeles Kings have that winning feeling right now, and they don't want to let it go.

Tyler Toffoli scored the clinching goal in a shootout to lead Los Angeles to a 3-2 victory over Philadelphia on Thursday night, snapping the Flyers' eight-game winning streak.

Adrian Kempe and Austin Wagner scored in regulation for Los Angeles, which won its third straight and fourth in five games.

"Just the feeling of winning hockey games, it's the best feeling as a hockey player in the world," Kings defenseman Drew Doughty said. "When you do it, you want to keep having that feeling every single night. Before the game we said, 'Let's have that feeling we had the other night.' And we got it again. We're all pumped in here."

Jonathan Quick made 30 saves for the Kings, who played their fourth contest of a six-game road trip over 10 days. Los Angeles (23-27-4) began Thursday with the worst record in the Western Conference, but six points out of a playoff spot.

"We're playing with confidence," Wagner said. "We're doing a lot of things right, and we're focusing on the details. Coming out of the break, we knew we had to make a push for playoffs. We're still in a spot to make it, and we're trying to push for playoffs right now."

The Kings appeared to have it won in regulation, but Philadelphia's Jakub Voracek scored with 18.2 seconds left in regulation to send the game to overtime.

Philadelphia had the best chance in the extra session when Travis Konecny's attempt from close range went off the post just over four minutes into OT.

The teams needed six shooters in the tiebreaker. After Claude Giroux and Nolan Patrick notched goals in the shootout, it appeared as if the Flyers had won the contest and began celebrating when Los Angeles' third shooter, Kempe, had his attempt ruled no good by the on-ice official. But it was deemed a goal after a video review showed the puck went into the net.

And Toffoli clinched it with his first career shootout goal on his 11th attempt.

"We deserved that win," Doughty said. "We felt that we were going to win it no matter what."

Sean Couturier also scored in regulation and Giroux had a pair of assists for Philadelphia. The Flyers (24-24-6) were seven points out of a playoff spot at the start of play, and they know they need to keep winning to make up ground lost in the first half of the season.

"We're going to have to bear down," Flyers goalie Anthony Stolarz said. "We got a point and we're happy about that, but we're not satisfied. At the end of the day, it's about two points and we wanted two."

Stolarz, Philadelphia's backup, got the nod in net to give rookie Carter Hart a rest and made 37 saves. The 20-year-old Hart has won seven consecutive starts, including a 41-save performance in the Flyers' 2-1 win over Vancouver on Monday night. Stolarz had a hand in Philadelphia's eight-game winning streak with his 38-save shutout in a 1-0 win at the Rangers on Jan. 29.

Kempe scored with 7:27 left in the second period, netting his fourth goal in the last three games by finishing a 2-on-1 with Brendan Leipsic, to put Los Angeles up 2-1.

Philadelphia had tied it at 1 on Couturier's 22nd of the season seven minutes into the second period. Giroux's diving swipe from the boards went in front to Couturier, whose backhand beat Quick through the legs.

The Flyers appeared to knot the contest at the end of the second period when Couturier's wrist shot beat Quick, but the puck crossed the goal line just after time expired.

Wagner opened the scoring with 11:14 left in the first period with a quick wrist shot from the slot that beat Stolarz to the blocker side. The goal was set up with a pretty two-way passing play between Wagner and Kyle Clifford.