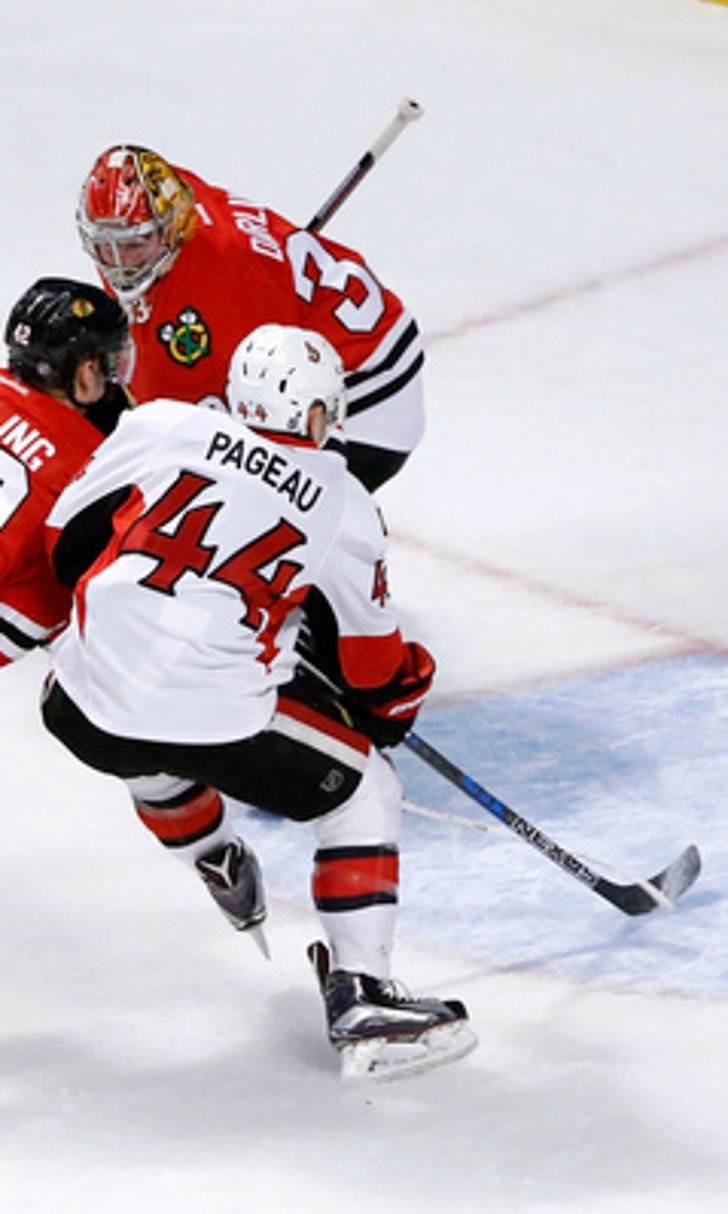 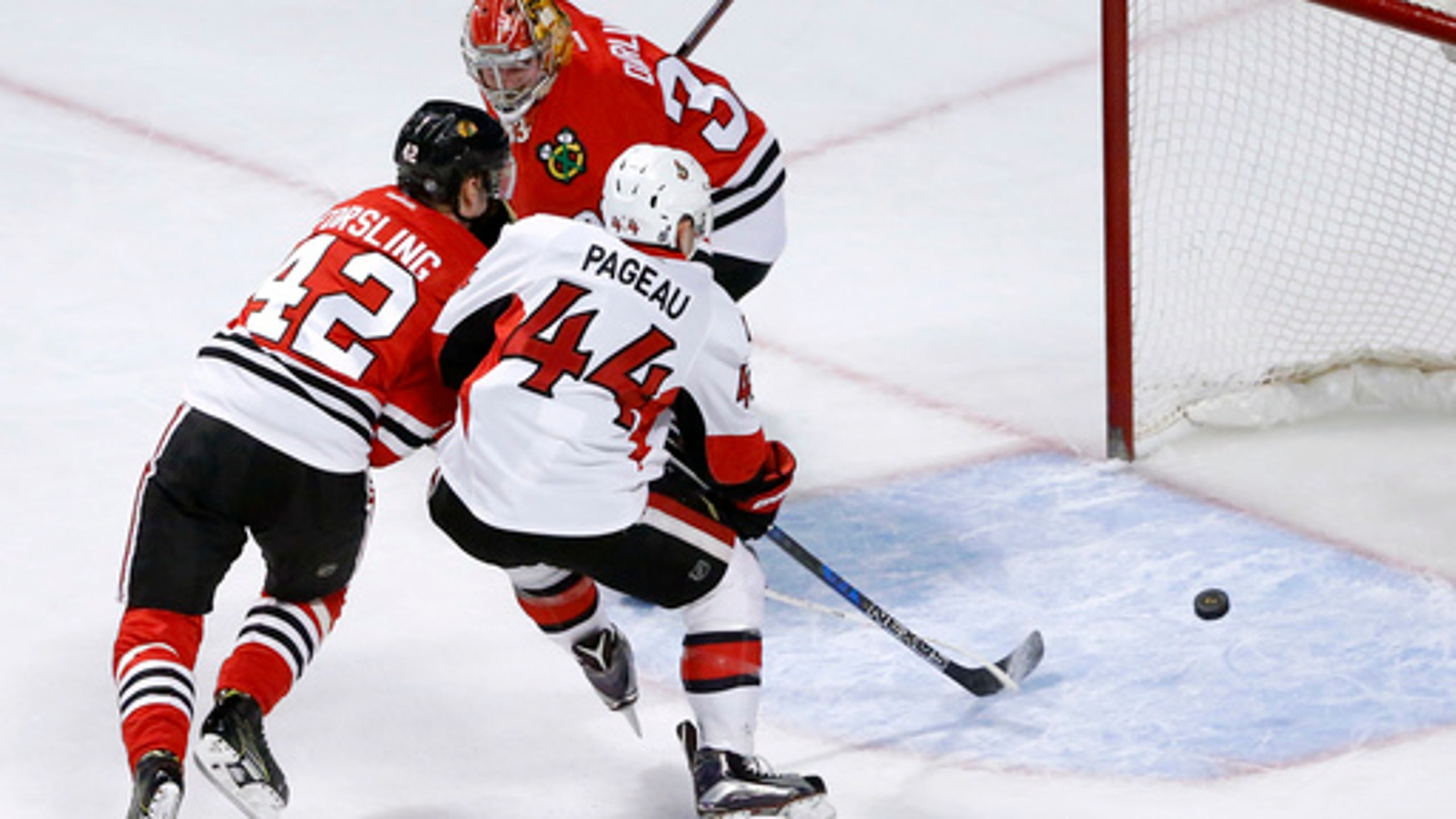 CHICAGO (AP) Mike Condon was 10 years old the last time Ottawa got a win in Chicago. Yup, it had been that long.

Condon made 23 saves, Derick Brassard and Tom Pyatt scored 10 seconds apart during Ottawa's three-goal second period, and the Senators beat the Blackhawks 4-3 on Tuesday night for their third consecutive victory.

Bobby Ryan added a goal and an assist as Ottawa held on for its first win at the United Center since March 28, 2001, stopping a seven-game road losing streak against Chicago. Dion Phaneuf scored a power-play goal, and Kyle Turris had two assists.

''The organization hadn't won here in 15 years,'' coach Guy Boucher said. ''So I think it's something good to celebrate, but we don't want to celebrate too long. Stay humble and keep working hard and battling.''

Artemi Panarin, Tyler Motte and Richard Panik scored for the Blackhawks, who had won five in a row and six of seven. Scott Darling made 26 saves while dropping to 6-3-1 in 10 starts since Corey Crawford had an emergency appendectomy on Dec. 3.

''They worked hard,'' said captain Jonathan Toews, who had a good look in the closing seconds but was unable to get his stick on the puck. ''They kept us in our zone more than we wanted to. I think we were too focused on getting on our rush. I think we're getting ahead of ourselves.''

Chicago played without center Artem Anisimov for the second straight game due to an upper-body injury, and forward Marian Hossa left in the first period with an upper-body injury. Coach Joel Quenneville said Hossa is questionable for Friday's game against Colorado.

Panik's ninth of the season on a delayed penalty made it 4-3 just 1:42 into the third, but the Blackhawks couldn't come up with the tying score despite putting heavy pressure on Condon in the final minutes of the goaltender's first career game in Chicago. Panik had a shot go off the left post, and the 26-year-old Condon stopped a penalty shot by Marcus Kruger with 4:52 left.

''I was just trying to play him honest and not go down to early. I was lucky, I got a piece of it and it trickled wide,'' Condon said. ''Very thankful for that save.''

Condon got the win in relief of Andrew Hammond in Sunday's 6-2 victory against the Islanders. Hammond departed in the first period at New York with an ankle injury, but Boucher said he doesn't think it's a long-term thing.

Panarin's one-timer - a laser from just outside the faceoff dot in the left circle - tied it at 1 at 11:17 of the first. It was Panarin's fifth goal and 12th point in his last six games.

It was still tied in the second when Brassard drove a pass from Chris Wideman past Darling for his seventh of the season just one second after a hooking penalty on Toews ran out.

Moments after the ensuing faceoff, Ottawa drove right back down the ice and Pyatt showed off some nifty stickwork on the right side of the net for his fourth goal of the season at 7:41.

Motte got one back for Chicago when Vinnie Hinostroza's deflected shot went right to him, setting up his first goal since Nov. 1 against Calgary. The rookie forward punctuated the score with a big upper cut as he skated behind the Ottawa net.

Clinging to a 3-2 lead, the Senators then made the most of their third power-play opportunity of the night. With Brent Seabrook in the box for tripping, Turris' big drive went off Phaneuf's left knee and past Darling on the glove side at 14:22.

''We had to battle pretty hard to come away with two points,'' Ottawa defenseman Erik Karlsson said. ''If that's not the best team in the league, definitely one of them, and we could feel that today.''

NOTES: Crawford participated in the morning skate and was activated from injured reserve after the loss, putting him on track to play Friday against Colorado. G Lars Johansson was reassigned to the minors. ... Senators F Mike Hoffman returned to the lineup after serving a two-game suspension for cross-checking San Jose F Logan Couture. ... Seabrook got his 300th career assist on Panarin's goal. ... The Senators recalled G Matt O'Connor from Binghamton of the AHL to back up Condon.

Richard Panik
share story
those were the latest stories
Want to see more?
View All Stories
Fox Sports™ and © 2021 Fox Media LLC and Fox Sports Interactive Media, LLC. All rights reserved. Use of this website (including any and all parts and components) constitutes your acceptance of these Terms of Use and Updated Privacy Policy. Advertising Choices. Do Not Sell my Personal Info