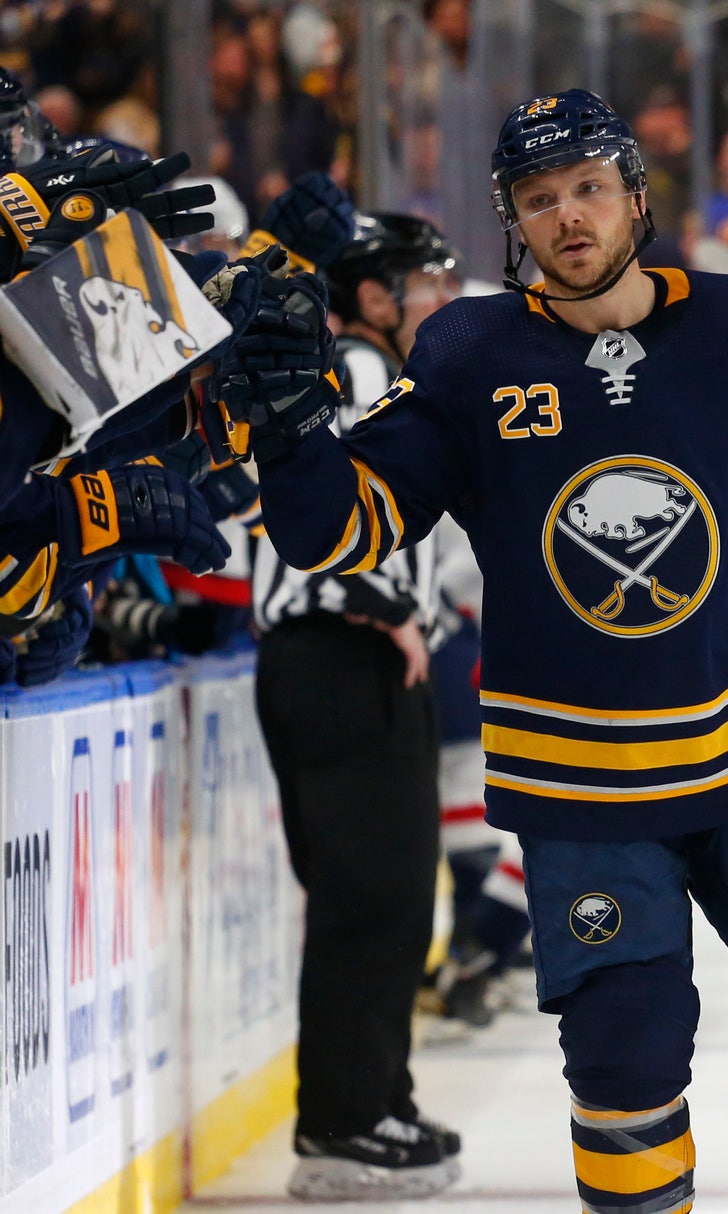 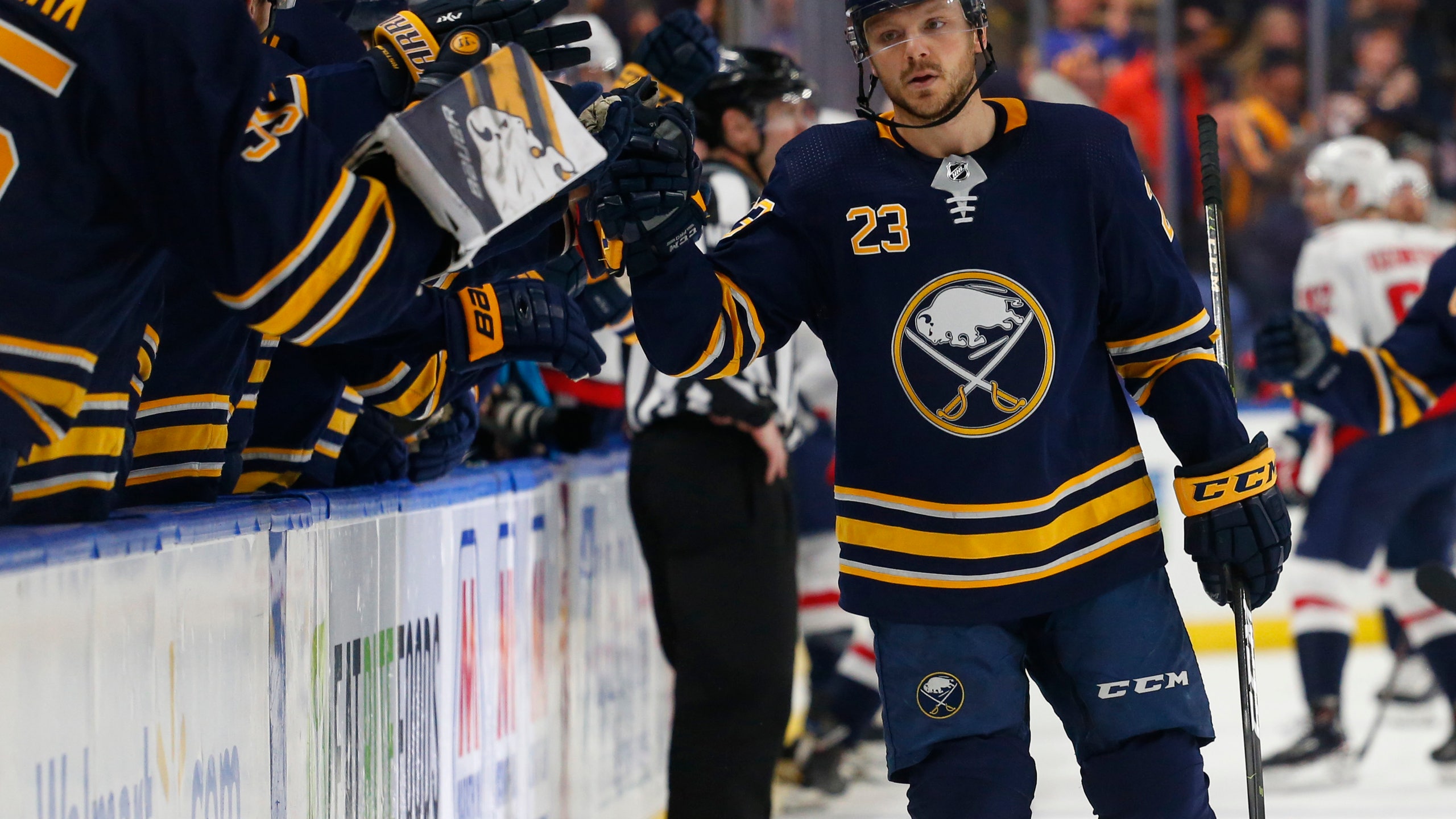 BUFFALO, N.Y. (AP) — No one was referring to the Buffalo Sabres as being soft on Saturday.

Jeff Skinner remarkably returned a period after a hush fell through the crowd at the sight of Buffalo's leading scorer attempting to crawl off the ice with an injury to his left leg. Sam Reinhart picked up the offensive slack by scoring three times.

And Carter Hutton held the Washington Capitals to scoring just twice on 33 shots in leading the Sabres to a 5-2 victory.

"I just like the urgency and the desperation in our game right now," coach Phil Housley said. "It's good to see that we could string another game of 60 minutes of just hard work."

Housley's assessment was a reversal from eight days earlier, when he referred to his team as soft following a 6-2 loss to the New York Rangers.

Coming off a 2-1 shootout loss at Tampa Bay on Thursday, the Sabres snapped a 0-3-1 skid in a game they opened with a 2-0 lead and never trailed.

Buffalo responded with a goal each time the Capitals cut the lead to one and overcame the initial dread of losing Skinner to a major injury.

"Yeah, obviously, you think the worst when he's down there and he's in a lot of pain like that," captain Jack Eichel said. "But it was great to see him come back, and it's great to see he's all right."

Skinner was hurt five minutes into the second period when he tripped over Washington's Carl Hagelin's stick,which got caught between his legs. Skinner was unable to put weight on his left leg while being helped off the ice and taken to the locker room.

The 36-goal-scorer then drew a loud cheer upon returning to the ice to start the third period.

"Good training staff, I guess," Skinner said. "I don't know. It was a bit of a weird feeling at first. And then I obviously kind of tested it out and it settled down a bit. It was good to get back out there."

Alex Ovechkin scored his league-leading 44th goal for the Capitals, extending his goal streak to five games. Andre Burakovsky also scored for Washington, which squandered a chance to win three straight for the first time since Jan. 6-10.

Coach Todd Reirden said the Capitals' inconsistent performance against Buffalo reflected how the team performed in closing a six-game road trip with a 3-3 record.

"We had a couple of games on this trip where we had everybody all in, and a real solid team effort," Reirden said. "Tonight, I didn't feel that was the case. It's too difficult a league to win in if you don't have everyone playing to their best abilities."

The team's inconsistencies are reflected in goalie Braden Holtby's numbers. After stopping 40 shots in a 3-2 win at Toronto on Thursday, he gave up four goals on 37 shots against Buffalo.

Holtby pinned the blame on the Capitals' overall defensive breakdowns.

"It's on us to make sure we get everyone on the same page," he said. "You don't get that by getting mad at each other or anything like that. It comes from coming together."

The outcome was decided in the third period, and after Burakovsky cut Buffalo's lead to 3-2 by tipping in Christian Djoos' point shot 4:16 into the frame.

Reinhart scored his second goal of the game 1:23 later by deflecting in Matt Hunwick's shot from the blue line. And Reinhart capped his third career hat trick by scoring into an empty net in the final minute.

NOTES: Sabres F Kyle Okposo told The Associated Press that he's feeling good while recovering from his third concussion in less than three years. Okposo has begun skating on his own and spoke while watching the game form the press box, eight days after being felled by a punch to the face during a fight with New York Rangers defenseman Tony DeAngelo. ... Sabres C Casey Mittelstadt did not play due to illness. ... Hagelin made his debut with the Capitals, two days after the eighth-year player was acquired in a trade with the Los Angeles Kings. ... Capitals D Nick Jensen did not play a day after being acquired in a trade with Detroit. Reirden wanted to ease Jensen in and expects him to play against the New York Rangers on Sunday.