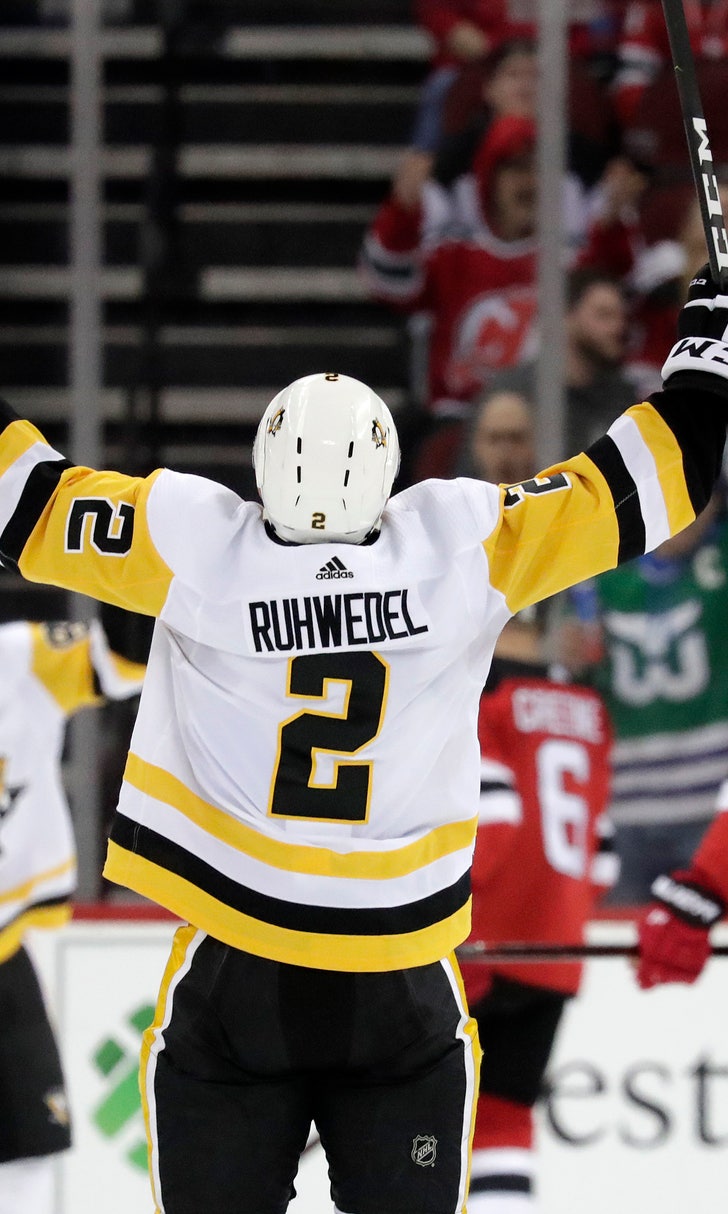 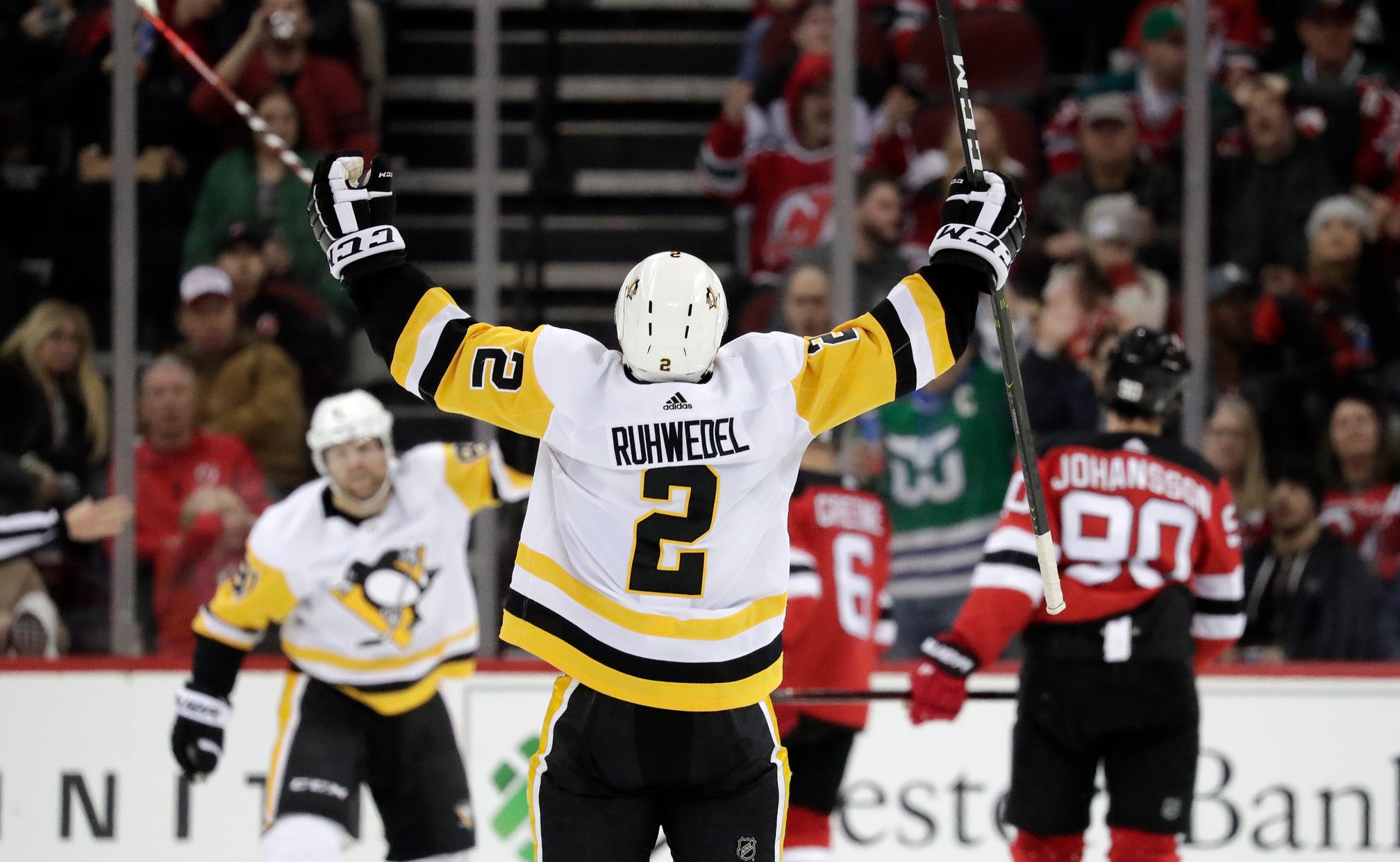 previous story
Fernando’s putback lifts No. 24 Maryland over No. 21 Iowa
next story
McDowell defends Daytona 500 decision not to push Logano

NEWARK, N.J. (AP) — The Pittsburgh Penguins seem to be getting their act together for a playoff push and one clear sign of that is finally finding a way to beat the New Jersey Devils.

Bryan Rust scored a tiebreaking goal midway through the second period and the Penguins avoided the embarrassment of being swept by the lowly Devils with a 4-3 victory on Tuesday night.

"Even last year, it was kind of the same way," said Zach Aston-Reese, who scored for the Penguins along with Chad Ruhwedel and Nick Bjugstad. "They had our number. It's nice to get that one, especially going down the stretch to the playoffs. Those are important wins."

Coupled with Montreal's win over Columbus, the Penguins moved into third place in the Metropolitan Division. They have now won four of the last five games in their bid to make the playoffs for the 13th straight year. The streak is the longest active playoff run in the NHL.

Penguins coach Steve Sullivan said his team was really good in the second period when it scored twice to take a 4-2 lead.

"I think at this time of the year guys are playing so hard that the games are so tight," he said. "We need everybody to have the juice. We need to play the game the way we want to play it. so I thought our second period was really strong, but thought the guys played hard all night."

Matt Murray made 33 saves, including 15 in the third period, to help the Penguins salvage the final game in the four-game season series.

"New Jersey always plays us really well," Ruhwedel said. "They come out hard but that second period was really good by us. We were in the offensive zone a lot. Guys were moving their feet. It was fun to be part of."

Jesper Bratt, Marcus Johansson and Miles Wood scored for the Devils, who had a two-game winning streak snapped. Keith Kinkaid had 24 saves in losing to the Penguins for the first time in four games this season.

"It could be the story of the season, we don't play a full 60 (minutes)," Kinkaid said. "I don't think their shots were too harmful, like I said a crazy curve on the fourth one and I have to find a way to squeeze that third one. I didn't see it right away. It's one me I have to come up with the big save. I think we played well enough to win."

Rust broke a 2-all tie at 10:45 with a shot from the inside of the right circle after a great rush up the ice by Jake Guentzel. Kinkaid got a piece of the shot but the puck squirted through his pads and rolled into the net.

Ruhwedel, who just returned to the lineup after sitting out since Nov. 19, got his first of the season and what proved to be the game-winner on a shot from the point that found the top corner of the net with 2 1/2 minutes to go in the second.

Wood closed the gap to a goal with 4:50 to play on a slow shot that somehow got under Murray's stick.

The Devils twice took one-goal leads in the first period only to see the Penguins tie the game.

Bratt scored for the second straight game to put New Jersey ahead early. Crosby extended his points scoring streak to six games by setting up Aston-Reese in front four minutes later to tie the score.

Johansson restored the lead when he stripped the puck from Phil Kessel in the Penguins zone and beat Murray with a backhander up high. Bjugstad scored on a power play with 1:36 left in the period for his second goal since being acquired from Florida on Feb. 1.

NOTES: The Devils gave the first 9,000 fans in attendance a David Puddy bobblehead. He's the Seinfeld television show character portrayed by Patrick Warburton, who painted his face in Devils' colors in an episode and shouted "We're the Devils." ... Travis Zajac appeared in his 900th game with the Devils. ... Penguins Matt Cullen will tie Phil Housley for third most games (1,495) by an American-born player the next time he takes the ice. ... The Devils activated F Blake Coleman off injured reserve and assigned F Nick Lappin to Binghamton (AHL).

Devils: End a three-game homestand against Ottawa on Thursday night.