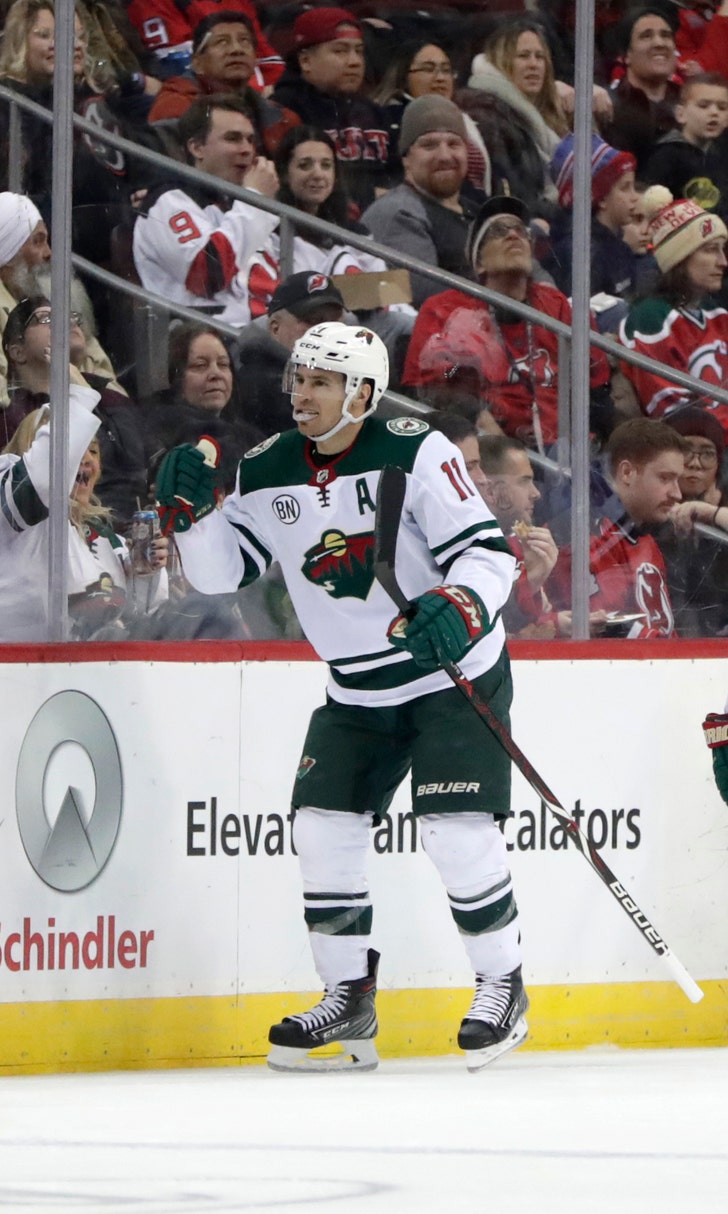 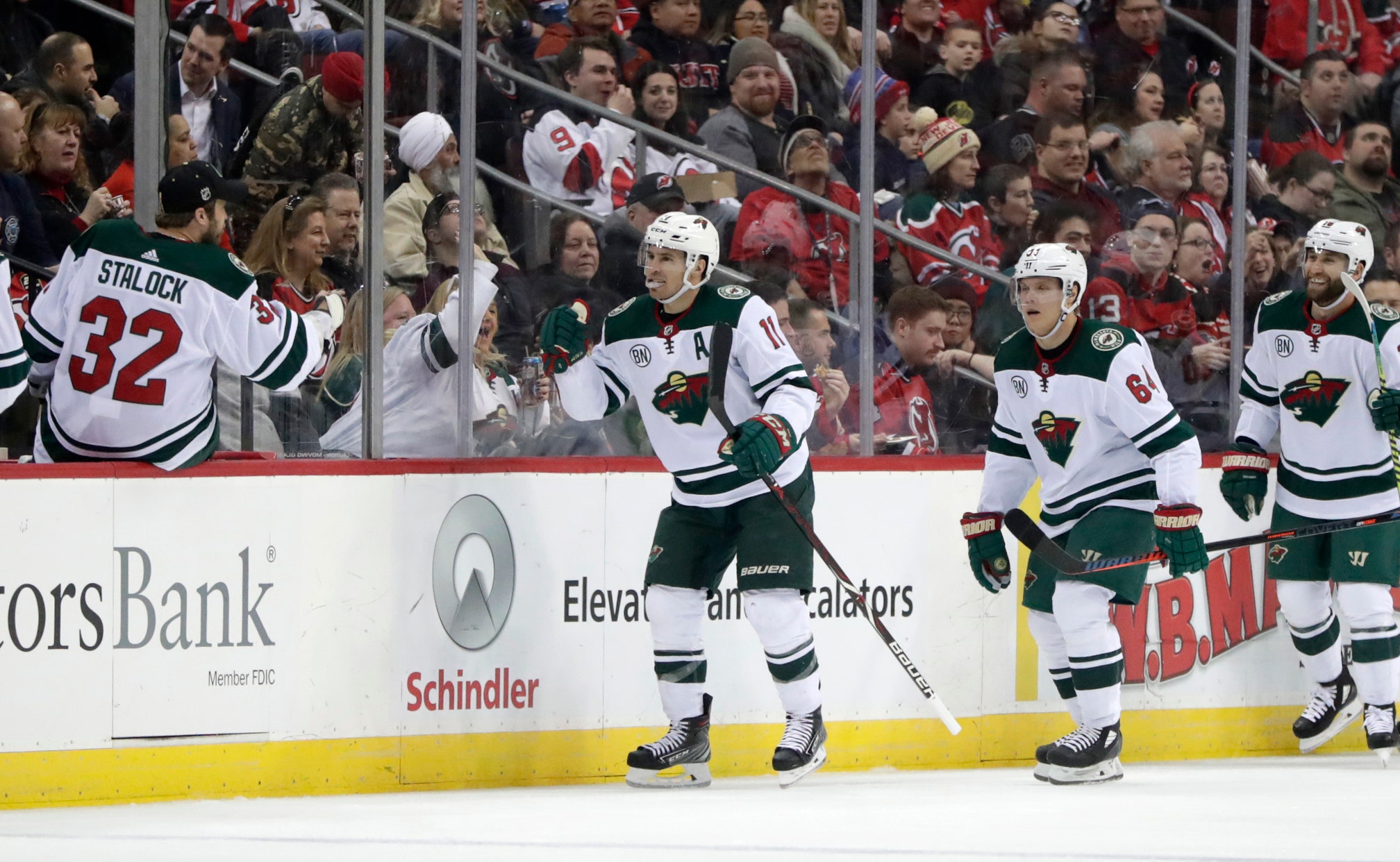 NEWARK, N.J. (AP) — Riding a four-game losing streak, playing without team captain Mikko Kiovu for the rest of the season because of a knee injury and seeing their grip on a wild-card playoff berth slipping, the Minnesota Wild needed players to step up in coach Bruce Boudreau's 900th game.

It wasn't surprising leading goal-scorer Zach Parise come through. The stunner was what the Wild's third line of Marcus Foligno, Joel Eriksson Ek and Luke Kunin did.

The trio each contributed a goal, and the Wild gave Boudreau something to smile about with a 4-2 victory over the New Jersey Devils on Saturday.

"We were looking to snap out of the funk, it's good to get back in the win column for us with the standings and with losing Mikko we have to find something positive, and today will be the start of playing some better hockey," said Parise, who gave the Wild the lead for good early in the second period with his 22nd goal.

Eriksson Ek made it 3-1 later in the period and Kunin provided the final margin in the third after Jesper Bratt scored in close against Devan Dubnyk, who had 16 saves.

"It was nothing too flashy," Kunin said. "Just wanted to get pucks back and get them to the net and it worked tonight. It was nice that our line was able to set a tone. We just wanted to keep it simple, get a lot of chances and get our bodies to the net. That's when good things happen."

The injury to Koivu earlier this week forced the Wild to recall Eriksson Ek from Iowa of the AHL. He has centered the line with Foligno and Kunin and has goals in two straight games.

"It's a one-game thing, but if they can continue to play well against the other team's better lines and shut them down, it allows the other lines to get free and do things," Boudreau said of his third line.

Brett Seney also scored for the Devils, who have lost the first three on a four-game homestand. Cory Schneider made 29 saves in his second straight start since an almost two-month stint on injured reserve with an abdominal issue.

"Their game plan is to keep teams to the outside and the way we score goals is to get to that (inside) area and put pucks in the back of the net and we weren't able to do that," Devils leading goal-scorer Kyle Palmieri said.

Parise, who signed with Minnesota as a free agent in 2012 after spending his first seven seasons in New Jersey, gave the Wild a 2-1 lead at 4:34 of the second period, tipping a power-play shot by Ryan Suter past Schneider.

Eriksson Ek put a rebound into an open net with 4:53 left in the second period to increase the lead to two goals.

Bratt got the Devils within a goal early in the third period with a backhander in close, but Kunin, a 2015 first-round pick who started the season in Iowa, beat Schneider from the left circle for his second goal of the season.

"I think Cory played well," Devils coach John Hynes said. "I think the fourth goal, we would all like to have that one back. I think when you look at his game overall, he made some good saves and gave us an opportunity to win."

Seney gave New Jersey an early lead with a blast past Dubnyk, but Foligno tied the game at 12:19 of the first period with a backhander into an open net. Schneider was defenseless on the play after losing his stick in a goal-mouth scramble.

NOTES: Boudreau is now 530-266-104 in his career with Washington, Anaheim and the Wild. ... Hynes coached his 300th game and he is now 130-131-39. ... New Jersey placed F Miles Wood (upper body) on injured reserve, activated F Joey Anderson (broken ankle) off IR and recalled F Nick Lappin and D Ryan Murphy from Binghamton (AHL). Lappin and Murphy were scratched. ... Wild D Greg Pateryn got the primary assist on Foligno's goal. He has two assists in the last three games, and three overall in 54.

Wild: Cross the Hudson River to play the New York Islanders on Sunday.

Devils: Finish their homestand on Sunday against Carolina.

Zach Parise
share story
those were the latest stories
Want to see more?
View All Stories
Fox Sports™ and © 2021 Fox Media LLC and Fox Sports Interactive Media, LLC. All rights reserved. Use of this website (including any and all parts and components) constitutes your acceptance of these Terms of Use and Updated Privacy Policy. Advertising Choices. Do Not Sell my Personal Info