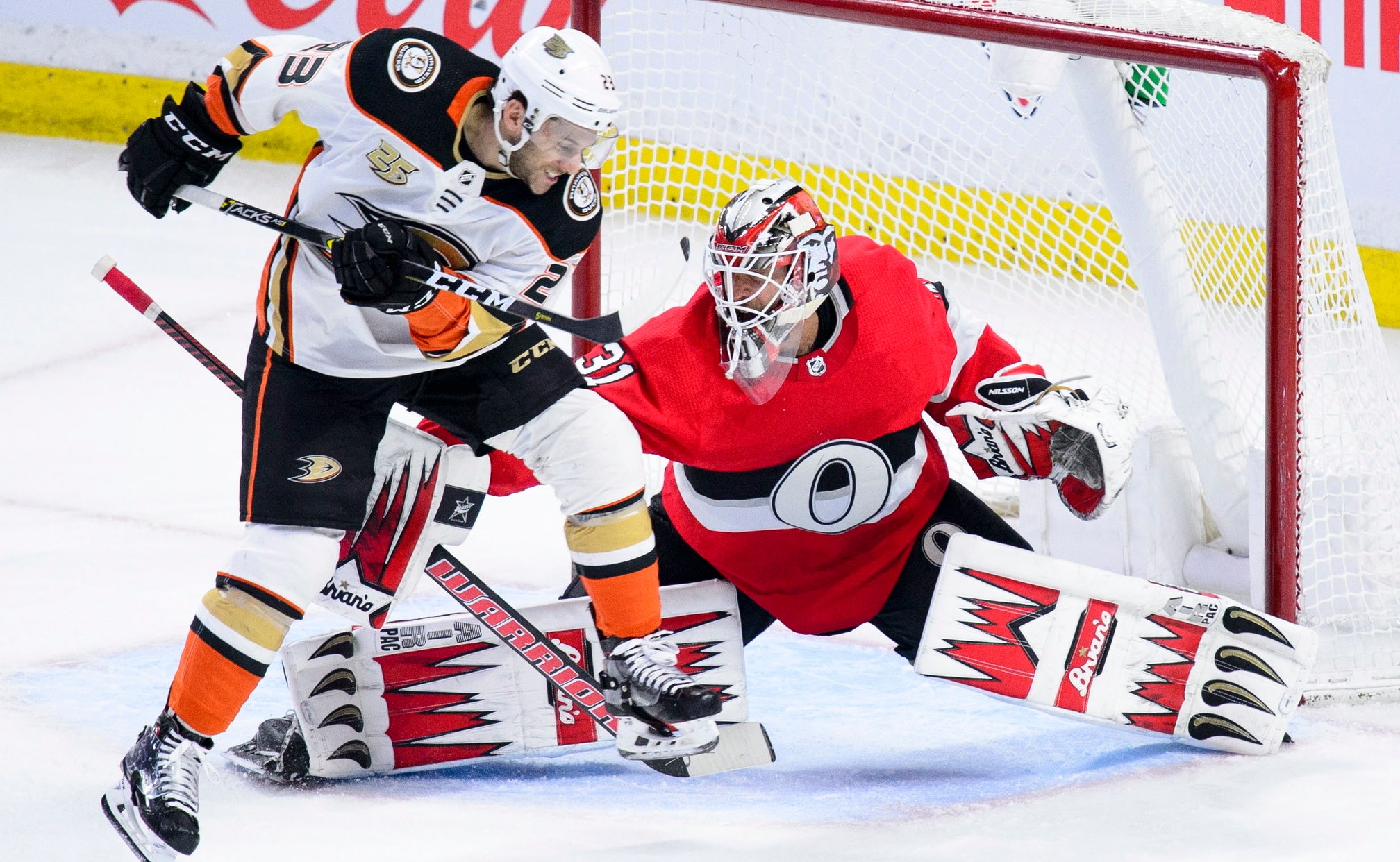 OTTAWA, Ontario (AP) — Anders Nilsson helped Ottawa end a five-game skid without much of a scare at all.

Nilsson stopped 45 shots for his first shutout of the season and the Senators beat the Anaheim Ducks 4-0 on Thursday night.

"The shutout was a bonus," Nilsson said. "It was great to get back to winning again. Think it was great for the whole team to snap this losing streak."

The Ducks continued to struggle. They've lost six straight and are 2-14-4 since Dec. 17. Thursday's game was the fourth of a five-game trip that ends Saturday in Philadelphia.

Randy Carlyle felt his team had a number of chances, but at the same time still failed to play well enough defensively. Anaheim outshot Ottawa 17-8 in the first period, but just couldn't find a way to beat Nilsson.

"There's been no reward for any of the work that we've put in," Carlyle said. "That's the confidence issue. You've got to try and build your people up and stay focused on the simple things and try to provide them with two things that they can focus on and build on and there's lots of positives in (Thursday's) game, but the big negative is we lost."

John Gibson was pulled for the fourth straight game, this time for an apparent injury. He made 22 saves before being replaced for the third period after a collision with teammate Jaycob Megna late in the second. Chad Johnson came on and stopped 9 of 10 shots.

The Senators were playing the second half of a back-to-back after losing 5-4 to the Toronto Maple Leafs but continued to press in the third period.

Stone picked up his 23rd of the season, beating Gibson through traffic to take a 3-0 lead, and Duchene added an empty-net goal.

Nilsson was most impressive late in the third period with the Ducks on the power play and Gibson on the bench for a two-man advantage as he made a number of big stops to preserve the shutout.

"I felt pretty comfortable even though I think I had more than a few lucky bounces and a few lucky breaks," Nilsson said.

Ducks forward Adam Henrique said his team has to find a way to be difference makers together.

"The details of our game aren't strong enough to win 1-0 right now," he said. "Night in, night out, it's tough, but the only way out of it is together."

NOTES: The Senators' Ben Harpur was a healthy scratch, Cody Goloubef made his Senators debut and Christian Jaros missed his second game with a lower-body injury. ... The Ducks were without Patrick Eaves

Ducks: Play at Philadelphia on Saturday.

Ottawa Senators
share story
those were the latest stories
Want to see more?
View All Stories
Fox Sports™ and © 2021 Fox Media LLC and Fox Sports Interactive Media, LLC. All rights reserved. Use of this website (including any and all parts and components) constitutes your acceptance of these Terms of Use and Updated Privacy Policy. Advertising Choices. Do Not Sell my Personal Info