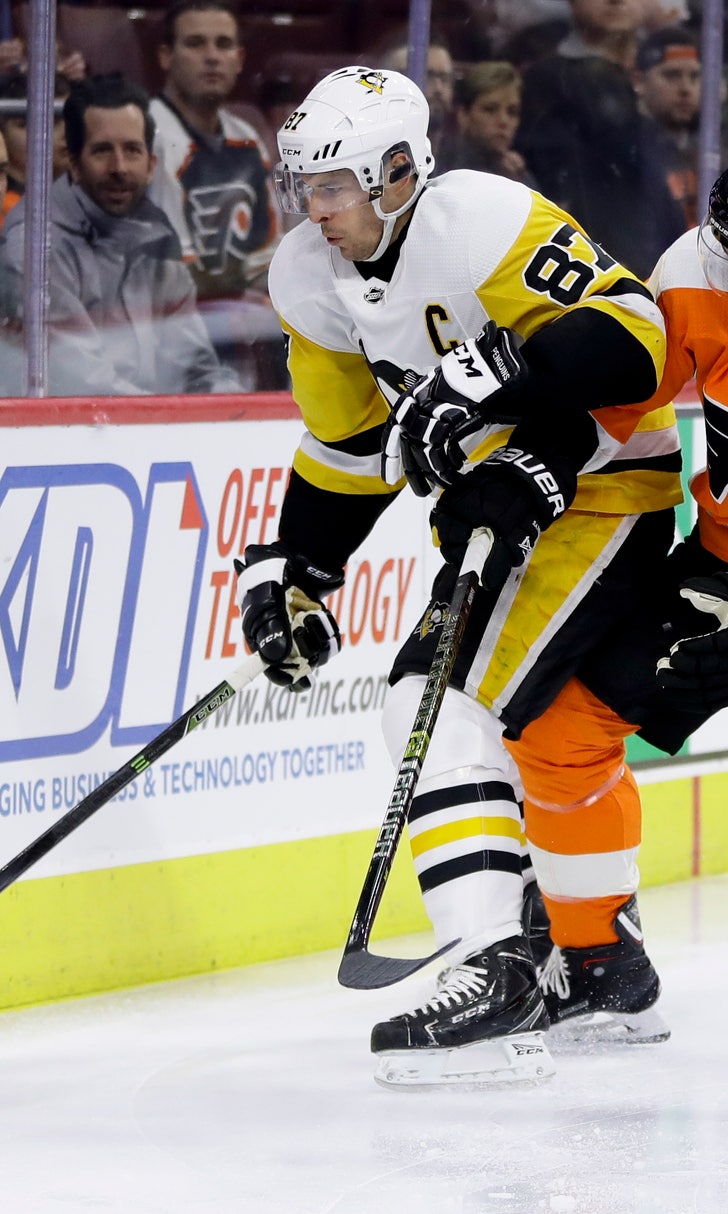 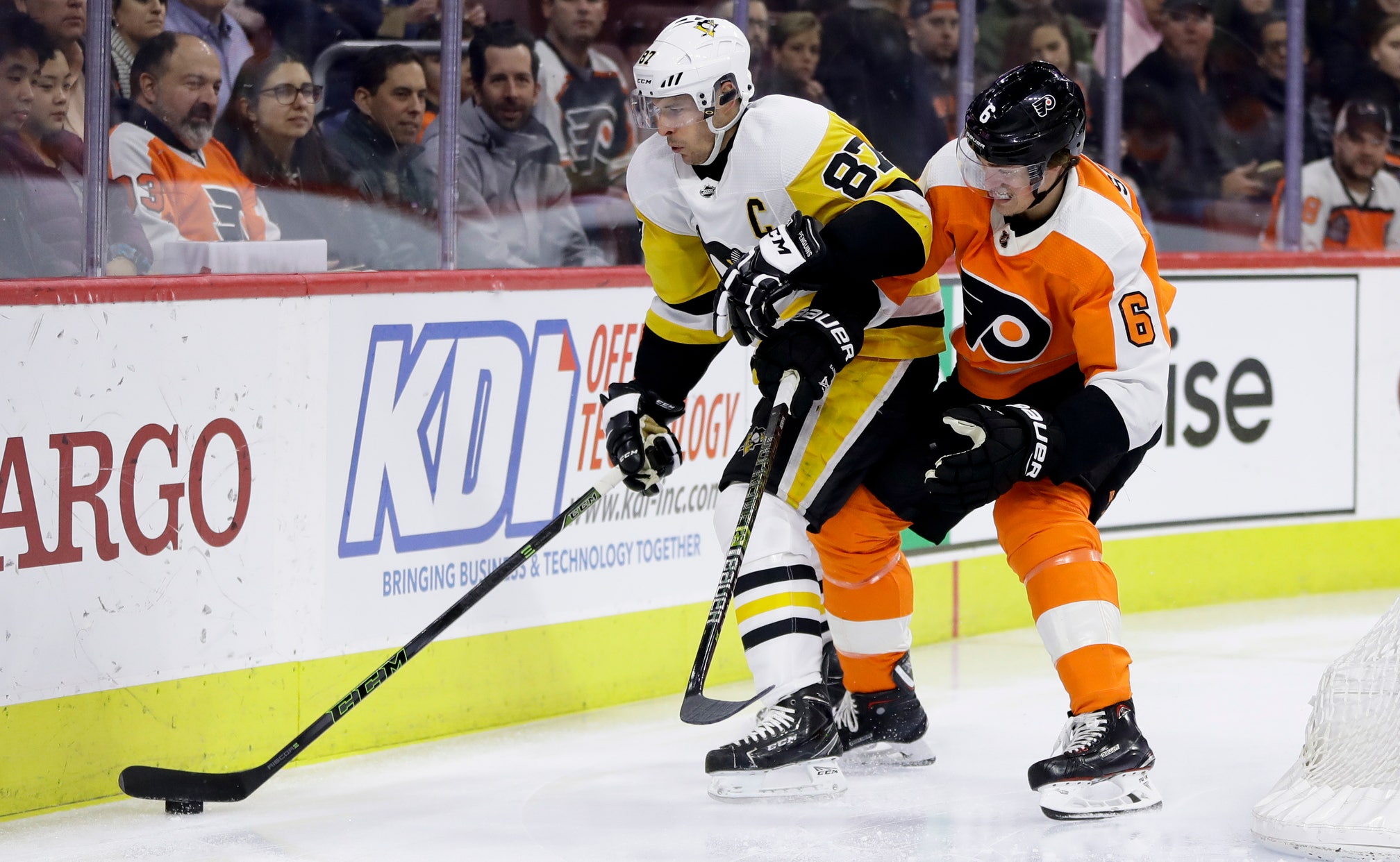 PHILADELPHIA (AP) — Matt Murray guzzled a sports drink through part of his postgame interview. It's not surprising the Pittsburgh Penguins goalie needed to rehydrate after such an intense outing.

Murray made a career-high 50 saves and Sidney Crosby had a goal and an assist to lead the Penguins to a 4-1 victory over the Philadelphia Flyers on Monday night.

"When you're out there, you don't really think about that," Murray said of the shot total. "You just do what you can to try to stop the puck."

Jake Guentzel and Nick Bjugstad also scored and Kris Letang had an empty-netter for the Penguins, who snapped a four-game losing streak while winning for just the fourth time in 12 games. Pittsburgh entered holding the final wild-card spot in the Eastern Conference.

Murray was a wall for the Penguins, withstanding an offensive flurry by Philadelphia that included a franchise-record 28 shots in the second period.

"He was great, especially in the second period," coach Mike Sullivan said. "That's the type of game he's capable of."

Jakub Voracek scored for Philadelphia, which lost for just the second time in 11 games. The Flyers could've pulled within four points of Pittsburgh with a victory, but now stand eight points behind the Penguins. The Flyers' disappointment stemmed from the defeat, but not their play.

"We play like that, we won't have to worry about anything," interim coach Scott Gordon said.

Flyers rookie goalie Carter Hart had his eight-game win streak halted, falling one game shy of setting an NHL record for consecutive victories prior to turning 21 years old. The 20-year-old also finished a game short of tying Pelle Lindbergh for the Flyers' rookie record for wins in a row. Hart had 24 saves.

"I have to be better than today," Hart said.

Crosby put the Penguins up 1-0 with a fluky goal with 11:41 left in the first period. Hart lost sight of the puck behind the net and it caromed off the glass to Crosby to the right of the crease. With Hart still looking the other way, Crosby shot into the empty half of the net for his 24th of the season and 40th goal in 65 career games against Philadelphia. The Penguins' star has scored against the Flyers more than any other team.

"You have to stay calm because you don't know if the goalie is eventually going to see it or someone else is going to see it," Crosby said. "It feels like it takes forever with the puck bouncing like that. It might look easy but when you have that much time, sometimes it's harder than you think."

Bjugstad made it 2-0 7:04 into the second with a wrist shot from a sharp angle , an uncharacteristically soft goal for Hart. It was the sixth of the season for Bjustad and his first with the Penguins since being acquired from Florida on Feb. 1.

The Flyers appeared to score with 7:07 left in the second when Nolan Patrick's rebound crossed the goal line, but the referee whistled the play dead when he thought Murray had gloved Travis Konecny's initial shot.

"I got lucky," Murray said.

Guentzel scored on a wraparound with 5:14 remaining in the third to make it 3-0. It was the team-leading 27th goal for Guentzel.

Voracek finally got Philadelphia on the board 40 seconds later on the power play, when he lifted the puck over Murray from close range.

The Flyers gained the man-advantage when Pittsburgh center Evgeni Malkin received a match penalty with 4:54 left for hitting Michael Raffl in the head with his stick. Malkin returned after missing five straight games due to an upper body injury and had an assist.

NOTES: Pittsburgh D Olli Maatta didn't return after being checked into the boards by Phil Varone with six minutes left in the first. . The teams will next play each other on Feb. 23 in an outdoor game at Lincoln Financial Field, the home of the Philadelphia Eagles. The season series is tied 1-1, as the Flyers won 4-2 ON Dec. 1 in Pittsburgh. . Hart was the seventh different Flyers goalie, including six starters, to appear in the last seven meetings against Pittsburgh. ... Letang passed Paul Coffee for most goals by a Penguins defenseman.

Pittsburgh: Play the first of three straight at home against Edmonton on Wednesday.

Philadelphia: At Minnesota on Tuesday.