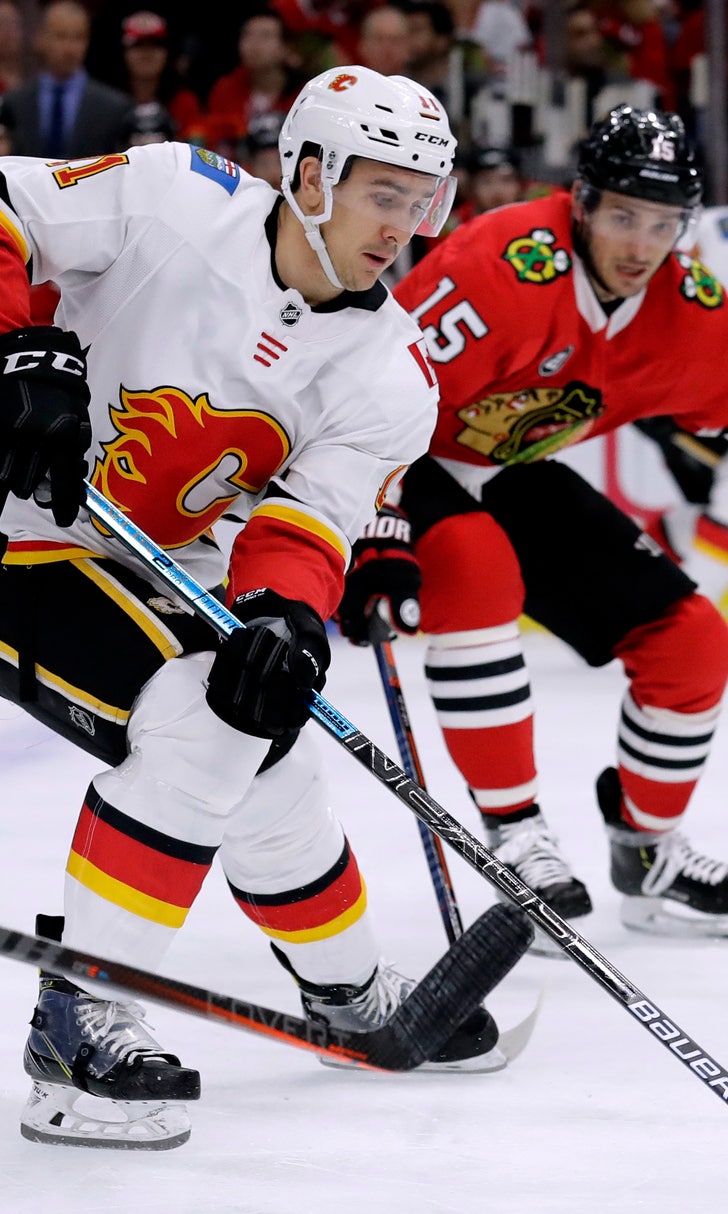 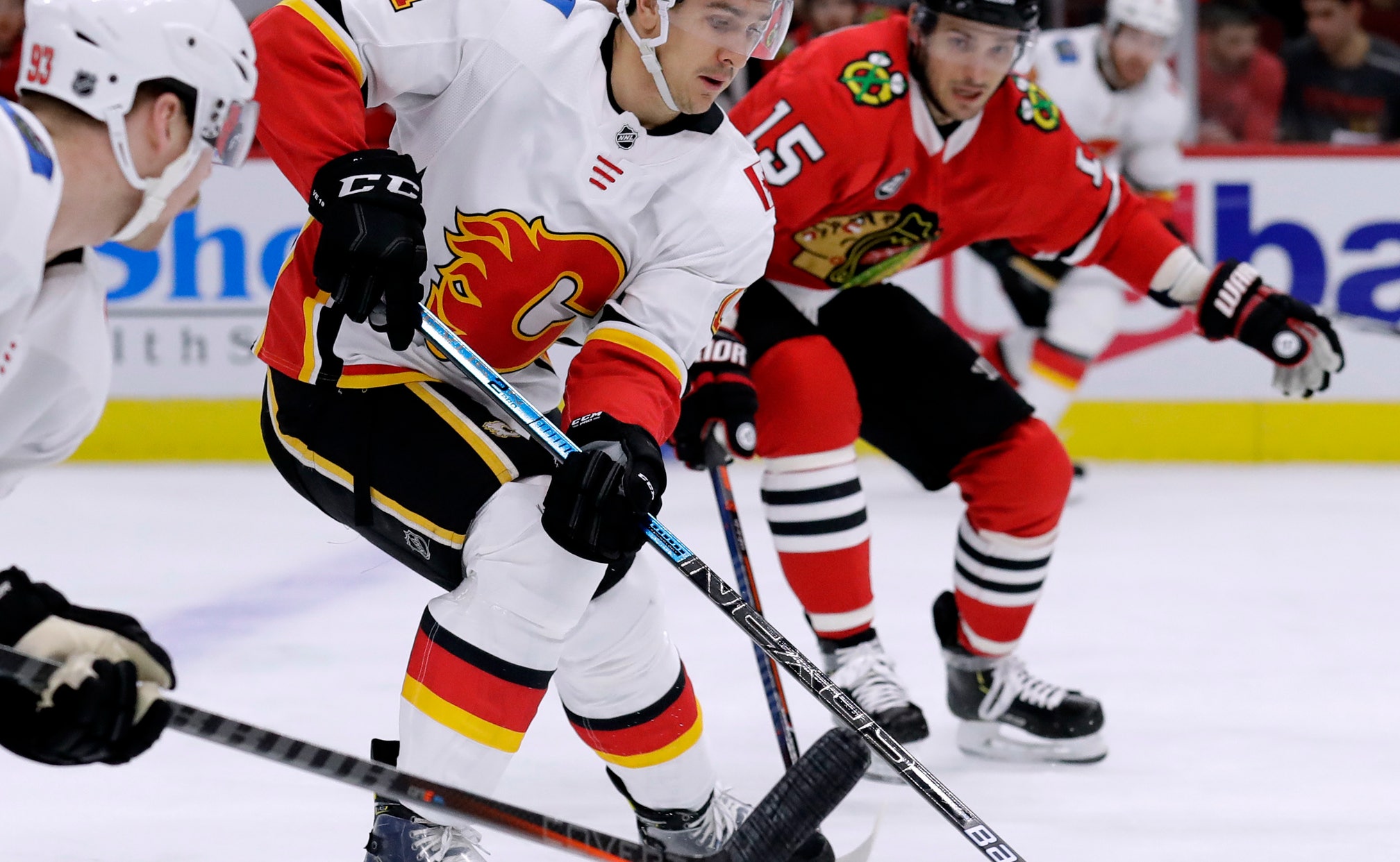 CHICAGO (AP) — The Calgary Flames might not have been at their best Sunday night, yet they got the breaks they needed.

Sean Monahan and Elias Lindholm each had a goal and an assist as Calgary edged the Chicago Blackhawks 3-2 and moved into first place in the Pacific Division.

Derek Ryan also scored and Johnny Gaudreau had two assists for the Flames, who won their second straight game and for the third time in four contests.

"We got the two points, right?" coach Bill Peters said. "There's lots of things we could have done better. Could have managed the puck a little bit and made some decisions."

But the Flames managed to cash in on a flagrant Chicago mistake.

Lindholm and Ryan scored power-play goals 1:26 apart in the second period to give Calgary a 3-1 lead after Chicago veteran Chris Kunitz received a major penalty and game misconduct for elbowing Travis Hamonic in the face.

"That ended up being the game-winning goal on the power play, so we did what we needed to do," Peters said. "You'd rather not see a guy take a head shot."

Hamonic said he probably has a broken nose, but the defenseman returned after the hit and played over 22 minutes.

"Probably not our best game, to be honest with you, but found a way to get through it," Hamonic said. "Found a way to win, came up with some big saves and big plays at the end."

Mike Smith made 22 saves, including a few flashy ones in the scoreless third, to preserve the win. While sprawled on his stomach, Smith stopped Artem Anisimov's point-blank attempt with his right skate with 5:14 left.

"A gaping net," Smith said "I was kind of a fish out of water there, kind of kicking my feet and fortunately got a piece of it."

Jonathan Toews and Dylan Strome scored for struggling Chicago, which dropped its fourth straight and lost for the sixth time in seven games. The Blackhawks fell to 3-8-2 under coach Jeremy Colliton, who replaced Joel Quenneville on Nov. 6.

The Blackhawks have led only once in their last seven games — at the end of a 5-4 overtime win at Florida on Nov. 24.

"I thought tonight was better, regardless of the result," Colliton said. "We don't control the result, we control our performance."

But Colliton couldn't control the hit by the 39-year-old Kunitz on Hamonic.

"It was hard to see and didn't really get a good look at it," Colliton said. "It was unfortunate."

In their previous six games, the Blackhawks had been outscored 17-4 in the first period and 31-19 overall. So, escaping the opening period tied 1-1, despite being outshot 18-6 by the Flames, was something of a moral victory for Chicago.

"A lot of little things seem to go wrong," Toews said. "It's just one of those things we're stuck in right now, snowballing in the wrong direction."

An opponent scored first against the Blackhawks for the seventh straight time when Monahan knocked in a rebound midway through the opening period for his second goal in two games in third in four. He connected from the left side of the net after Crawford stopped Lindholm from the slot.

Toews tied it at 1-all just over three minutes later.

Following a faceoff in the Chicago zone, the puck and Toews got by Flames defensemen Noah Hanifin at the left point. Toews raced in alone, cut to the slot and beat Smith with a shot between the pads.

Kunitz, a healthy scratch in six of the last seven games, elbowed Hamonic in the face along the boards at 7:08 of the second. Hamonic dropped to the ice with a bloody nose and Kunitz was sent off.

Lindholm scored 10 seconds later, connecting on a shot from the right circle after taking a cross-ice pass from Gaudreau.

Crawford was out of position to the left of the net, but managed to reach across the goalmouth and glove Lindholm's shot. A video review, however, showed Crawford's glove was over the goal line

Ryan made it 3-1 at 8:44, beating Crawford on the stick side from the top of the right circle.

Strome's power-play goal with 4:15 left in the second cut it to 3-2. It was the 21-year-old forward's second goal in four games since Chicago acquired him from Arizona.

Crawford passed the puck from the crease to Alex DeBrincat near the Calgary blue line. DeBrincat dished to Strome, who beat Smith from the slot with a backhander into the upper right corner.

NOTES: Lindholm has a goal and four assists in his last three games. . Chicago D Erik Gustafsson was a healthy scratch for the first time this season. Also sitting out for Chicago were C John Hayden and LW Andreas Martinsen. . Calgary D Juuso Valimaki (lower body) missed his third game and F Michael Frolik (lower body) and D Michael Stone (on IR, blood clot in arm) each missed their fifth.

Flames: At Columbus on Tuesday.

Blackhawks: At Anaheim on Wednesday.