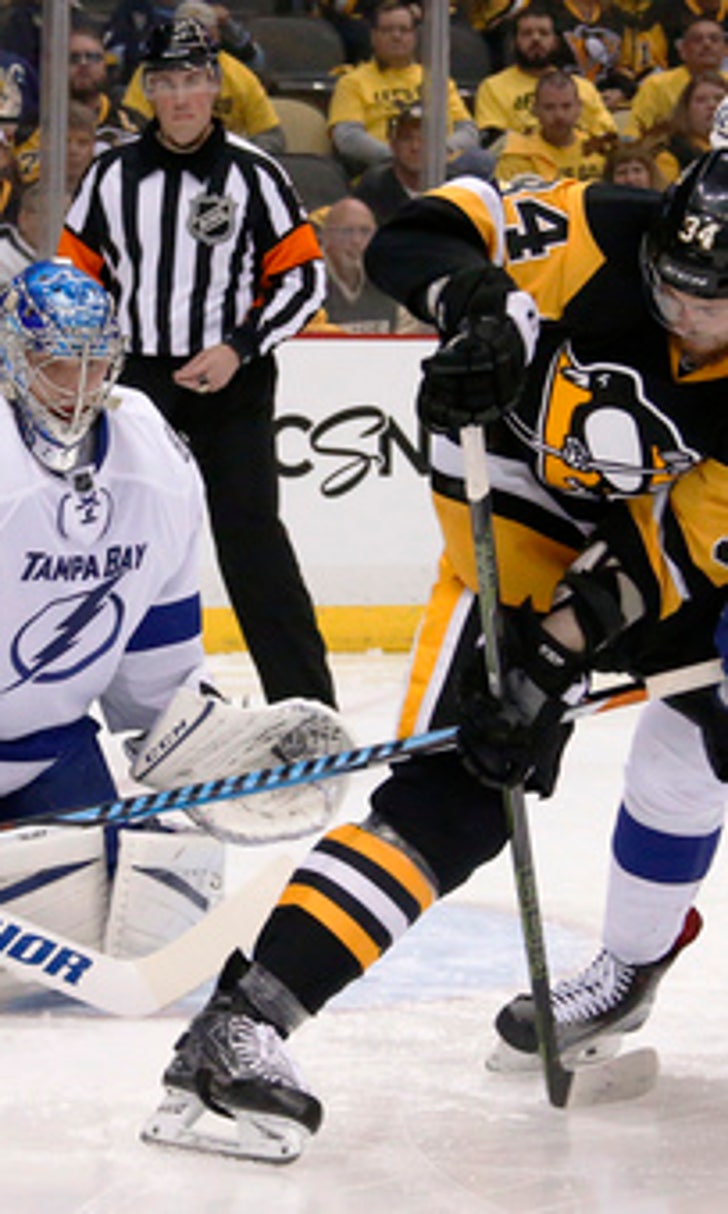 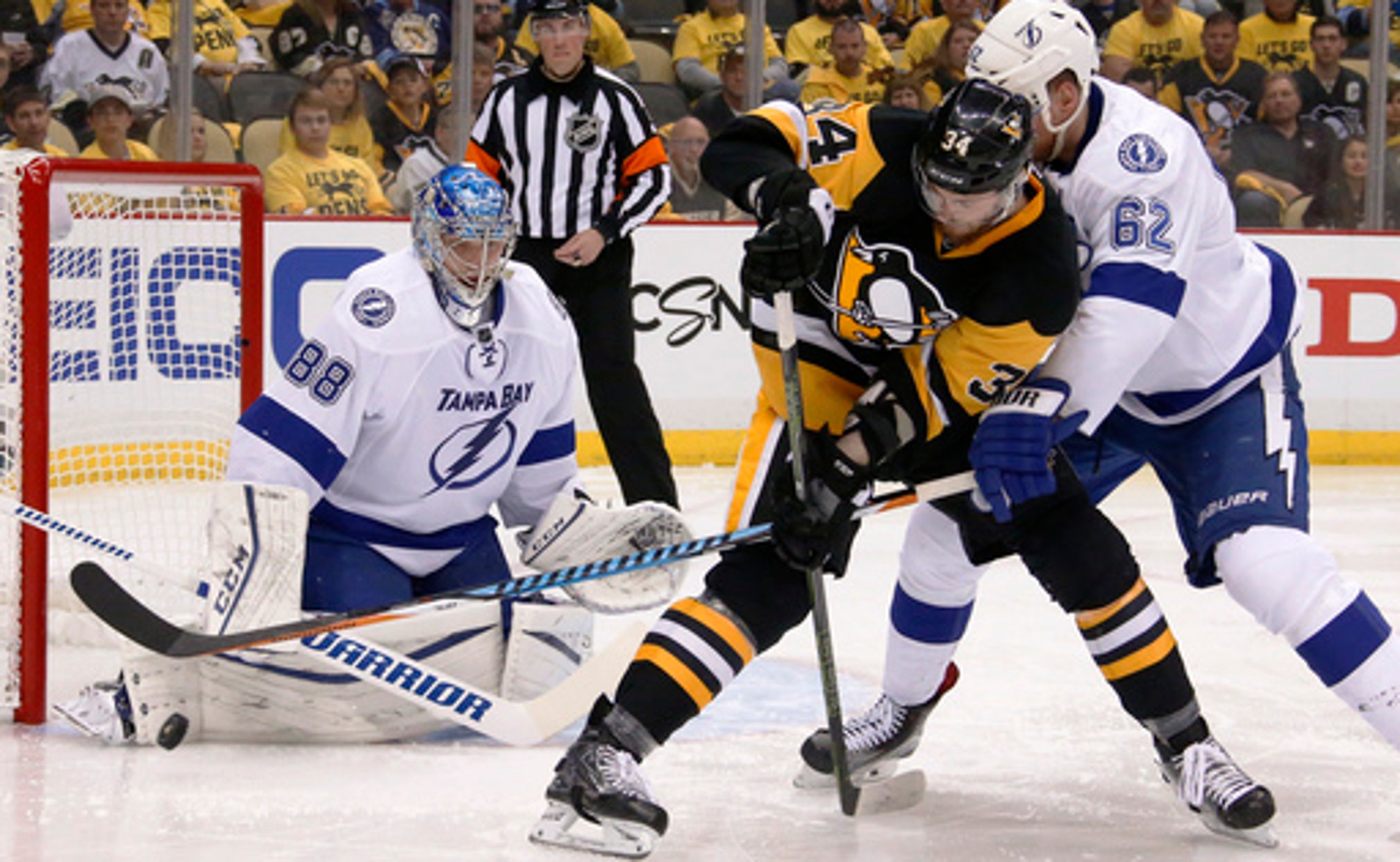 previous story
Falcons owner: NFL would have to 'build a wall' between Raiders and Vegas gambling
next story
Chargers rookie Joey Bosa back in his element 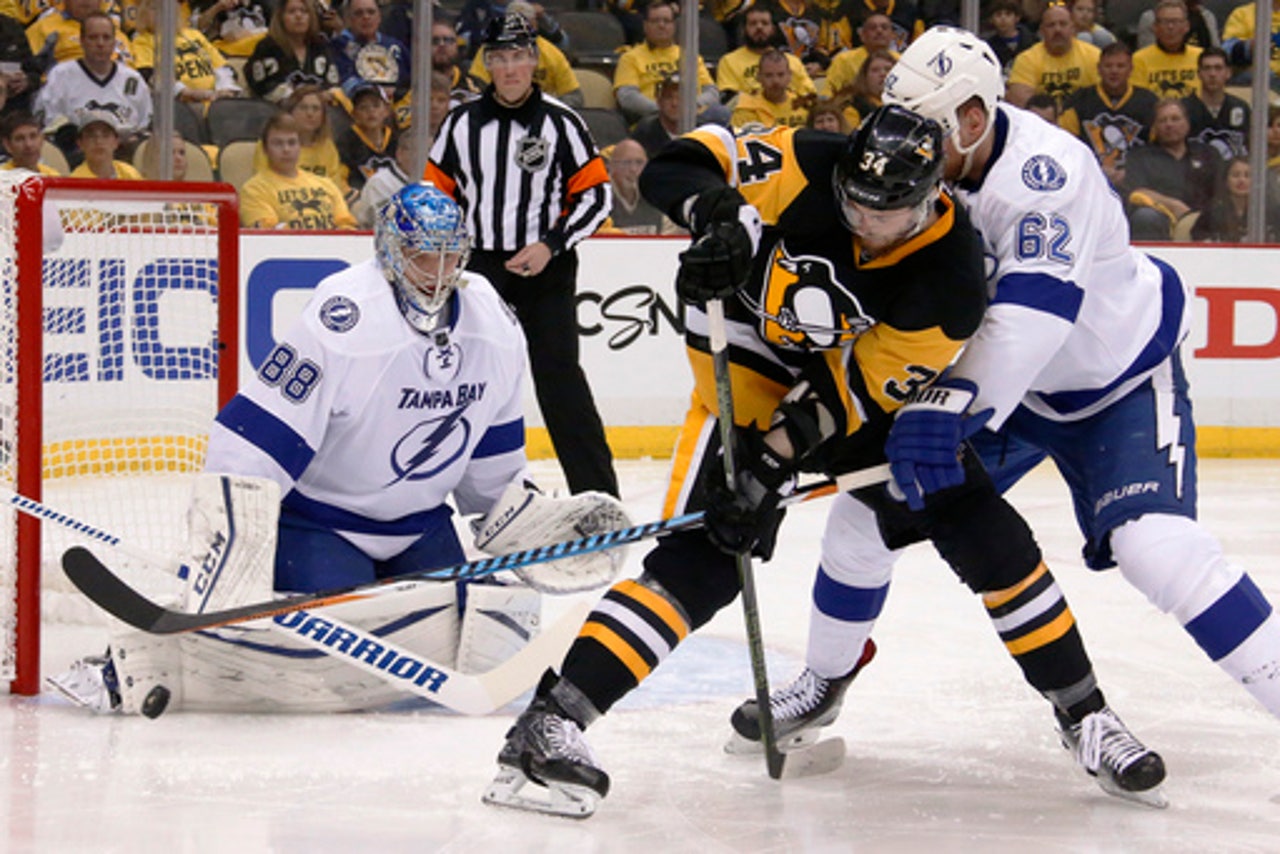 PITTSBURGH -- The sight of their franchise goalie writhing in agony did little to slow down the Tampa Bay Lightning.

How could it? Watching the bold-faced names on their roster taken off the ice with their long-term status unknown has become commonplace for perhaps the NHL's most resilient team. When Vezina Trophy finalist Ben Bishop left Game 1 of the Eastern Conference finals on Friday night in the first period with a left leg injury, the Lightning wished him well and went right back to work.

Andrei Vasilevskiy made 25 stops filling in and Tampa Bay bottled up the Pittsburgh Penguins for a 3-1 victory to seize home-ice advantage in the best-of-seven series.

"I think we played well even before (Bishop's injury) and we kept going," said forward Ondrej Palat, who scored his third goal of the postseason. "We know Vasi is a really good goalie."

One Tampa Bay may have to rely on with Bishop's situation uncertain.

The massive 6-foot-7 anchor at the back end of the Lightning defense left on a stretcher 12:25 into the series after his left leg wrenched awkwardly underneath him as he tried to scramble back into position. Tampa Bay coach Jon Cooper said X-rays were negative and there appears to be no structural damage to Bishop's leg, though Cooper offered no indication on whether Bishop will be available for Game 2 on Monday night in Pittsburgh.

The Lightning dropped just two games while sprinting to their second straight appearance in the conference finals despite missing franchise center Steven Stamkos and top defenseman Anton Stralman, both of whom remain out indefinitely with health issues. If Bishop can't go, they'll rely on Vasilevskiy, a 21-year-old who was thrust into a similar position during last spring's Stanley Cup finals against Chicago, winning Game 2 in relief.

Nearly a year later Vasilevskiy finds himself in a similar spot. He hardly looked overcome by the stage or shaky from rust. Having his teammates grab a three-goal lead and block 15 shots in front of him helped Vasilevskiy get comfortable in his first extended action in more than a month.

"The first two periods felt not good," Vasilevskiy said. "I was cold and tough mentally but when we scored three goals. I got some confidence and third period I felt pretty well."

The meeting between two of the fastest teams in the league was supposed to play in stark contrast to Pittsburgh's physical six-game series with Washington. The anticipated track meet never materialized, and the scoring chances created off the rush were one-sided in favor of the Lightning. 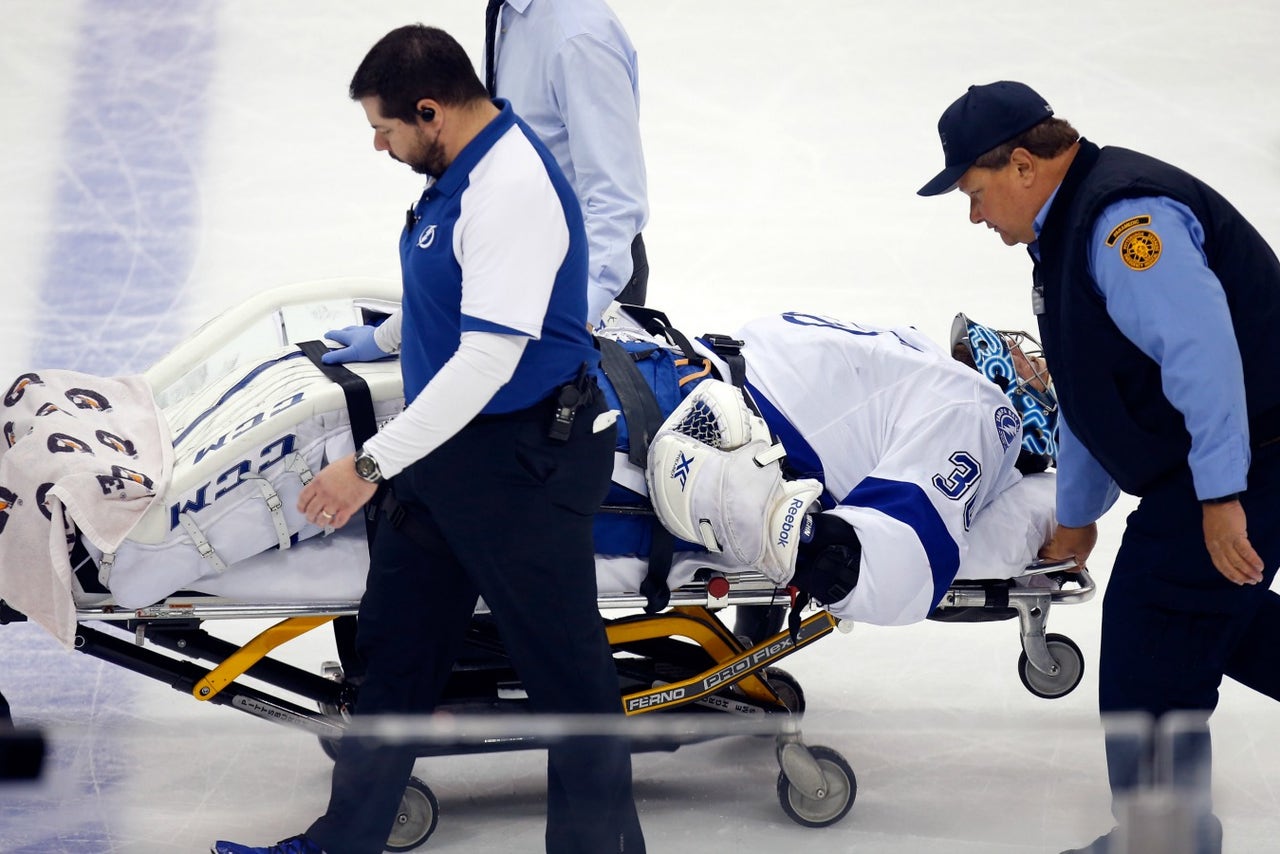 Bishop being taken off the ice in a stretcher.

Tampa Bay struck 18:46 into the first when Alex Killorn slipped behind struggling Pittsburgh defenseman Olli Maatta and fit a shot between Matt Murray's legs. Palat doubled the lead 2:33 into the second when Valtteri Filppula's slap shot smacked off Murray's pads and -- with no Penguins around to get in his way-- Palat reached out and slammed home the rebound. Jonathan Drouin finished off a 3-on-2 by burying a feed from Palat into the open net 18:25 into the second period to give the Lightning complete command.

Facing just their second three-goal deficit of the playoffs, Pittsburgh drew within two on Patric Hornqvist's power-play goal with just 55 seconds left in the second, a shot from the right circle set up by a pretty between-the-legs flick by Sidney Crosby. While the score seemed to give the Penguins a decided lift -- they carried the play over much of the final 20 minutes -- the Lightning and Vasilevskiy held on to grab the early momentum in a series that looks far more contentious going forward than it appeared going in.

Pittsburgh insisted it was a far different team than the one that lost all three regular-season meetings to the Lightning, pointing to the club's strong finish and heady play while dispatching the Rangers and the Capitals as proof the Penguins were much improved over than the group Tampa Bay last saw on Feb. 20.

Maybe, but the Lightning tested that mettle early when Ryan Callahan crunched Pittsburgh's Kris Letang in the corner less than three minutes in, sending the star defenseman slumping to the ice. Letang was motionless for a moment before eventually skating to the locker room. Callahan received a major penalty for boarding but remained in the game, and Letang made a surprisingly quick return during the lengthy delay as Bishop was stretchered off.

"I'm trying to pin him," Callahan said. "Unfortunately, in that split second I can't make a decision. The position he was in made it worse than it was. That's not the way I play."

The rancor continued late in the first when Pittsburgh's Chris Kunitz collided with Tampa Bay's Tyler Johnson along end boards. Kunitz's right knee connected with Johnson's right knee as Johnson spun around to avoid the check. Johnson re-entered the game midway through the second period. Pittsburgh defenseman Brian Dumoulin was pushed head-first into the boards by Palat late in the third but made it off the ice without help.

NOTES: Tampa Bay went 1 for 2 on the power play. The Penguins were 1 for 4. ... Stralman, who is dealing with a fractured left leg, skated on Friday morning and is nearing a return. ... Stamkos skated Friday morning, too, and wore a regular jersey instead of a red "no contact" jersey but Cooper said there was no change in Stamkos' status as he recovers from a blood clot.