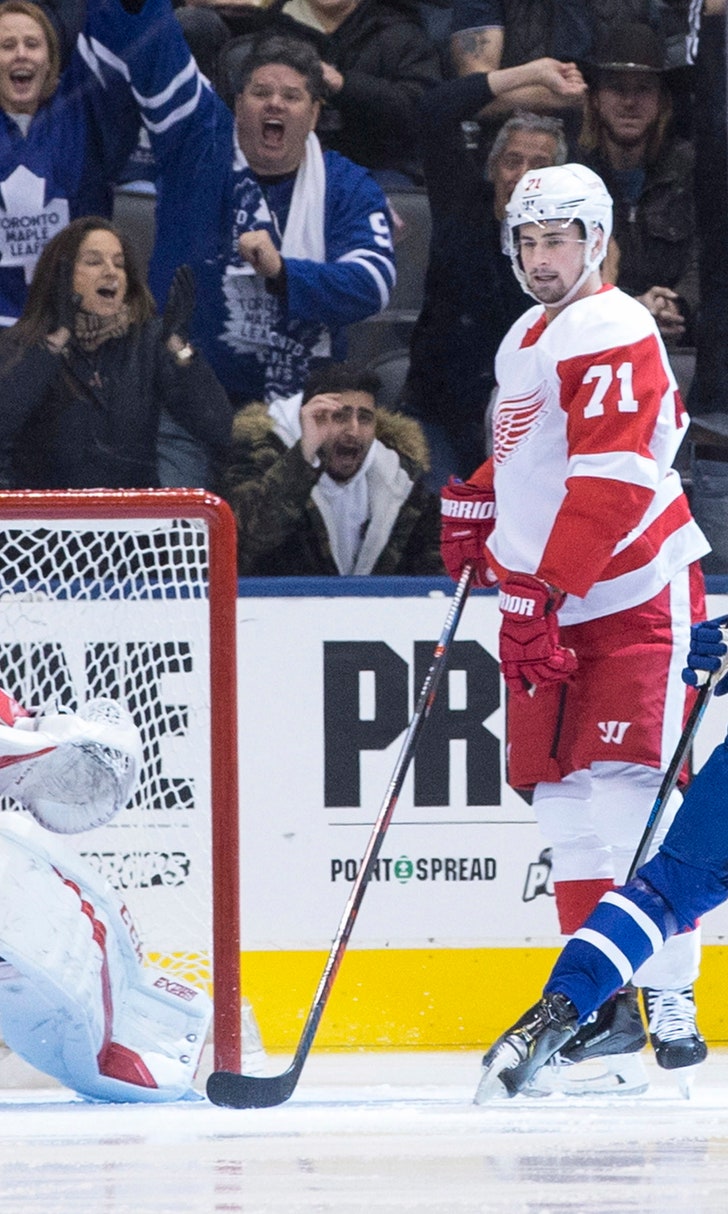 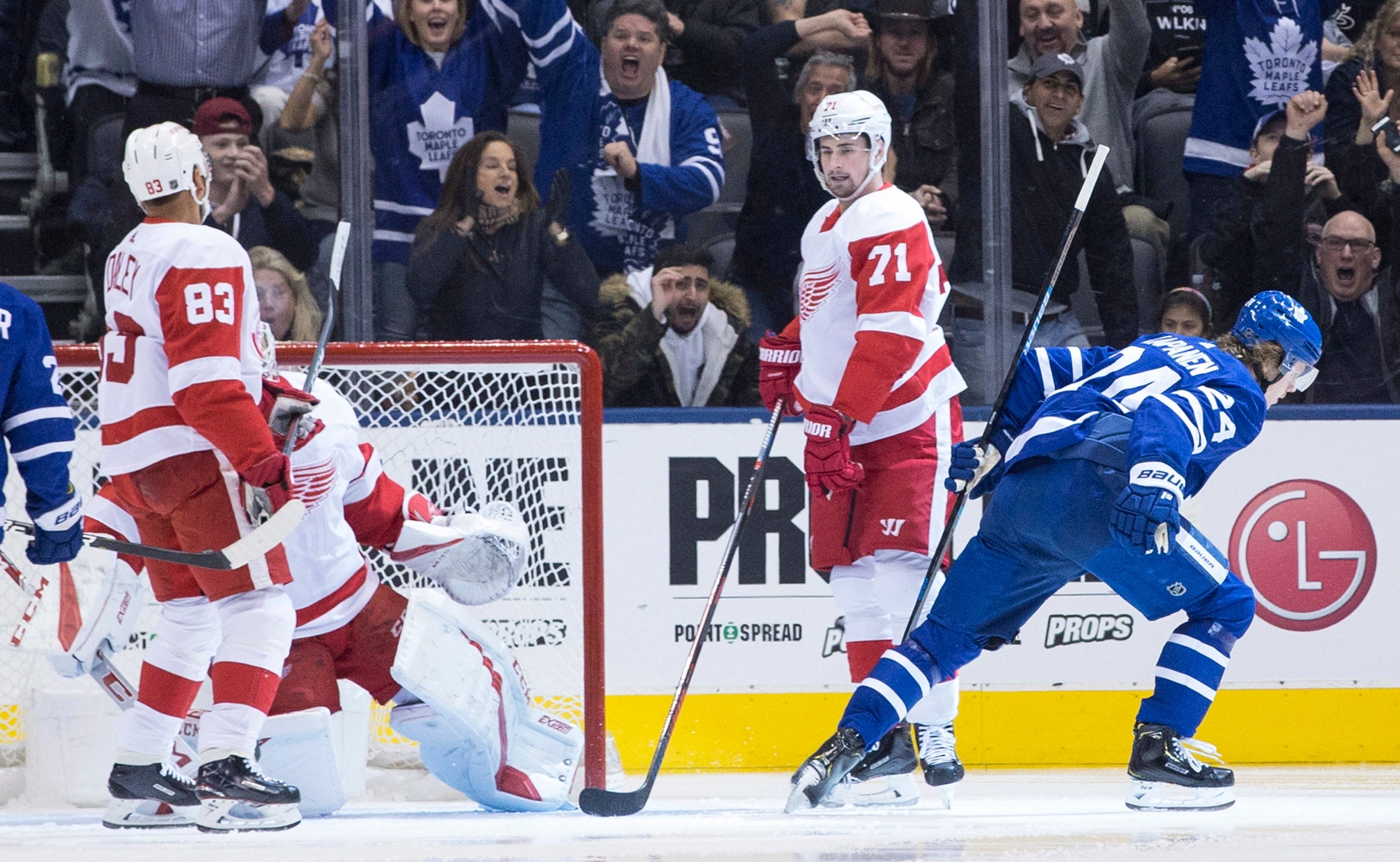 TORONTO (AP) — Kasperi Kapanen scored his second goal of the game at 1:53 of overtime and the Toronto Maple Leafs beat the Detroit Red Wings 5-4 on Sunday night.

Kapanen's winner squeezed through the pads of former Leafs goalie Jonathan Bernier and just got over the goal line.

Morgan Rielly and John Tavares each had a goal and an assist, and Frederik Gauthier also for Toronto, which extended its winning streak to four games. Garret Sparks made 26 saves for the Leafs.

Tavares tied it 4-4 with 7.6 seconds left in regulation when he tipped a shot from the point by Jake Gardiner for his 24th of the season with Sparks on the bench for the extra attacker. Tavares nearly won it a minute into overtime, but he shot high over the net from close range.

After Los Angeles goalie Calvin Petersen made a series of spectacular saves to start overtime, Toffoli caught the Golden Knights on a shift change and beat Marc-Andre Fleury on a breakaway with a wrist shot.

RALEIGH, N.C. (AP) — Sebastian Aho and Teuvo Teravainen each had two goals and two assists, and Carolina beat Boston while wearing Hartford Whalers uniforms for the first time since moving 21 years ago.

Aho had his fourth career four-point night — and his second in five games — while it was the third for Teravainen. The Hurricanes scored four straight goals — three in the second period — to erase an early 2-0 deficit and snap a two-game losing streak that had left them two points out of last place.

Justin Faulk also scored for Carolina, which scored two short-handed goals for the first time since 2013.

Ryan Donato had two goals, Steven Kampfer also scored and Brad Marchand had two assists for the Bruins, who had won three straight and six of eight.

Tuukka Rask made 32 saves for Boston, and Petr Mrazek stopped 27 shots for the Hurricanes

SAN JOSE, Calif. (AP) — Alex Galchenyuk ended a slump by scoring twice and had the only goal in the shootout to lift Arizona over San Jose.

Tomas Hertl scored twice in the third period for San Jose, which lost its third straight after winning a season-high five in a row.

Galchenyuk hadn't scored in his previous 16 games. Tim Heed scored his first goal of the season in his third game for San Jose.

The Islanders' first two goals went in off Dallas goalie Anton Khudobin. On the winner, Nick Leddy's shot from the top of the slot hit the left post and went off Khudobin's right skate before Lee poked the puck between the goalie's legs.

Tyler Pitlick scored the game's first goal for the Stars in the second period before Casey Cizikas tied it with a fluke goal at 14:10. Leo Komarov added an empty-net goal with a minute remaining. Khudobin finished with 25 saves.

Islanders goalie Robin Lehner made 19 saves, six in the third period against a listless Dallas offense on the second night of a back-to-back.

Denis Malgin also scored and Frank Vatrano added an empty-netter as the Panthers won road games on consecutive night and prevailed for the fourth time in five games overall.

Dylan Strome had a goal and two assists for the last-place Blackhawks, who had their season-high, three-game winning streak snapped. Connor Murphy scored his first goal of the season and Alex DeBrincat netted his 17th.

James Reimer made 26 saves for Florida and Cam Ward stopped 21 shots for Chicago, as No. 1 goalie Corey Crawford missed his fourth game with a concussion.

NEWARK, N.J. (AP) — Sergei Bobrovsky made 39 saves, Artemi Panarin had a goal and an assist, and Columbus beat New Jersey for its fourth consecutive victory.

Cam Atkinson and Oliver Bjorkstrand added first-period goals for the Blue Jackets, who trail first-place Washington by two points in the Metropolitan Division going into the league's holiday break.

The shutout was Bobrovsky's second of the season and 26th of his career.

Michael Raffl and Wayne Simmonds scored in regulation, and Michael Neuvirth made 32 saves as the Flyers won for the third time since changing coaches.

Chris Kreider and Boo Nieves scored for the Rangers, who lost their fifth in six games. Henrik Lundqvist stopped 28 shots.