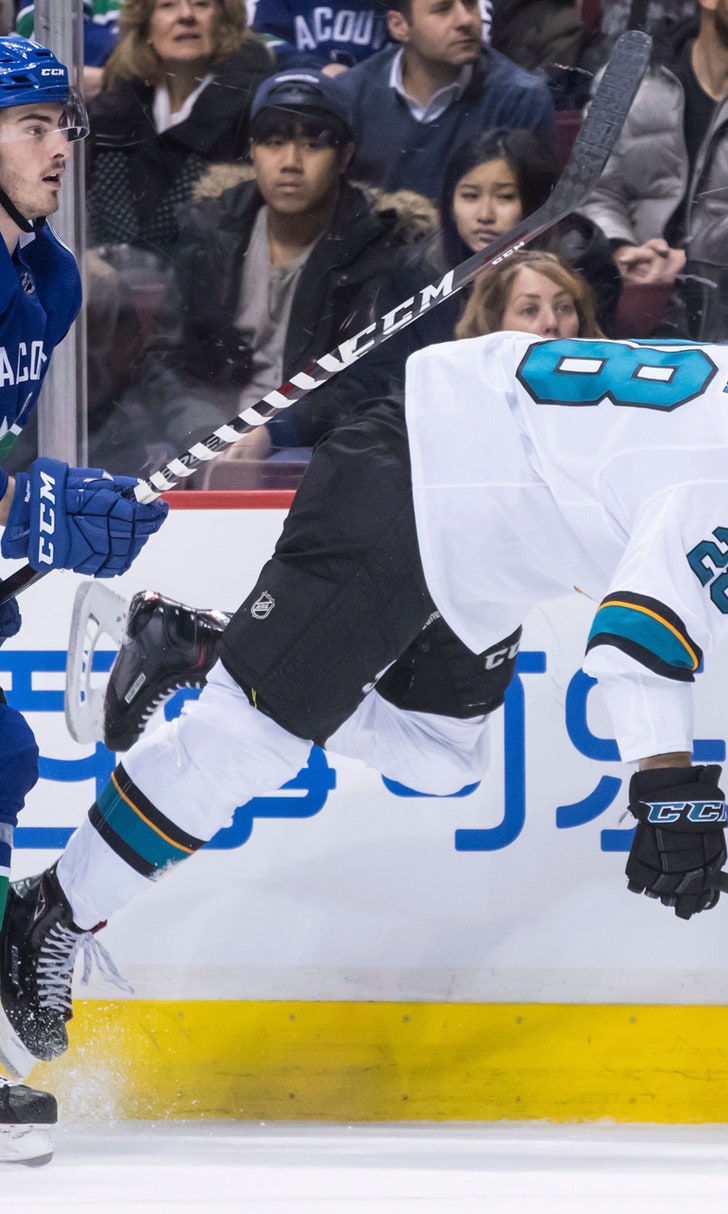 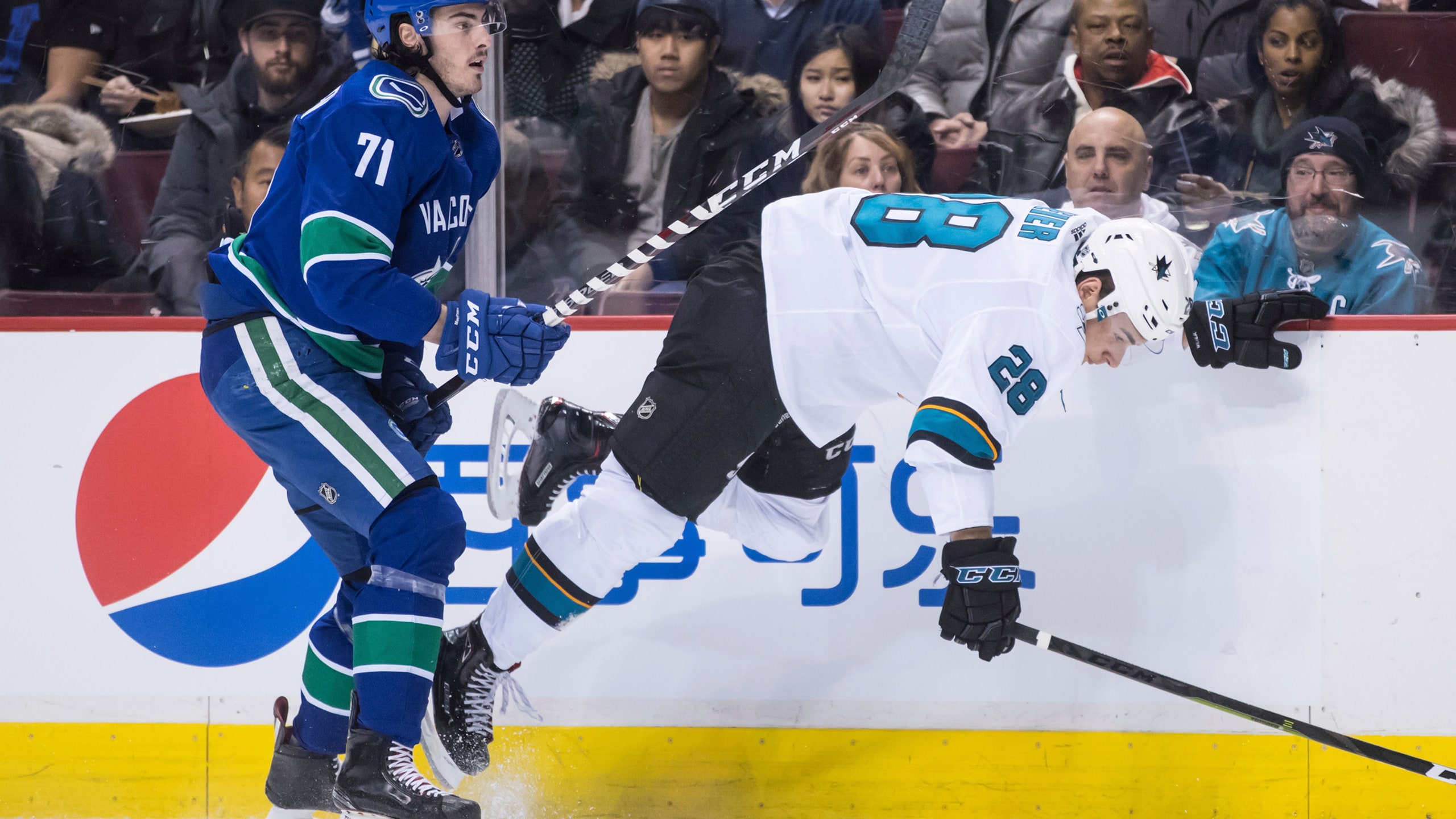 VANCOUVER, British Columbia (AP) — The San Jose Sharks took no pity on teenager Mike DiPietro making his NHL debut in the nets for the Vancouver Canucks.

Evander Kane scored twice, leading the Sharks to a 7-2 rout of the Canucks on Monday night.

The victory moves San Jose into first place in the Western Conference and extends the Sharks' winning streak to six games.

Bo Horvat and Derrick Pouliot scored for Vancouver. DiPietro stopped 17 of 24 shots in his NHL debut.

The 19-year-old native of Amherstburg, Ontario, was called up from the Ontario Hockey League's Ottawa 67's on an emergency basis last week after Canucks backup Thatcher Demko was sidelined with a knee sprain.

"I don't feel bad at all for putting him in the net," Canucks coach Travis Green said. "He's here, he's the backup. I didn't have another choice. That's who we had to play tonight," the coach said.

Jacob Markstrom, the team's starting goalie, was slated to start on Monday but was scratched as a precaution due to tightness in his lower body.

"Definitely not the ideal first game," DiPietro said. "But it's something I've dreamt about my entire life and to have the opportunity this young to do it, it's something that's positive for me, that I'll take as a learning experience."

As the game went on, the young goalie felt more comfortable and said he'll focus on the things he did right as he continues working on his game.

"When you focus on the negatives too much, you're going to feel like an ant in the net," he said.

DiPietro struggled early, letting in the first shot of the game after Canucks defenseman Erik Gudbranson failed to corral the puck behind the net.

Logan Couture collected the puck and dished it to Meier, who fired it past DiPietro 1:04 into the first period.

The Sharks added another goal just minutes later off a high shot by Kane. Vancouver defenseman Ben Hutton attempted to punch the puck out of the air in front of the net, but instead sent it in off of DiPietro.

When Karlsson added San Jose's third goal 8:48 into the opening frame, the Canucks had yet to register a shot.

Despite a slow start, Vancouver seemed to find its way late in the first, tying up the Sharks in their own end.

With just seconds left on the clock, rookie Elias Pettersson sliced a pass to Horvat down low. The center hammered a slap shot past Jones to put the Canucks on the board.

Vancouver out shot San Jose 13-5 in the second period, but the Sharks added goals from Kane, Hertl and Lebanc.

Lebanc's tally came from a 2-on-1 in which Joe Thornton drew DiPietro across the crease before dishing off to the right-winger.

The assist was the 1,050th of Thornton's career. He passed Gordie Howe for ninth place on the league's all-time assists list.

It was also the 39-year-old center's 1,457th NHL point, tying Teemu Selanne for 15th place on the all-time points list.

"That's an unbelievable accomplishment, unbelievable career, and that's something that should be really celebrated and I think our whole group and I are excited we were here to witness that," said Sharks coach Peter DeBoer. "Gordie Howe's career speaks for itself but when you get a guy like Joe Thornton that actually passes him on the assist list that is an amazing accomplishment."

Logan Couture said he's speechless over sharing a dressing room with someone who has passed a Howe milestone.

"It's pretty crazy," said the San Jose center, who had two assists. "(Thornton) is a special player, he's been a special player for two decades and I still believe that he is underrated. I still don't think he gets the credit he deserves for how world class a player he has been for two decades. Pretty special."

Vancouver's second goal came from Pouliot 12:06 into the third. Zack MacEwen assisted on the play. It was the 22-year-old' MacEwen's first NHL point and came in his league debut. He was called up from the American Hockey League's Utica Comets on Sunday.

Pavelski added the final goal of the game less than two minutes later.

"It's pretty cool, taking a look up and seeing Joe Thornton and Pavelski right across the ice and shooting on me," DiPietro said. "Obviously when they score on you it's not too good. But I had to pinch myself and just stay in the moment."

Despite the result, Horvat had kind words for Vancouver's young goalie.

"It's not easy to come right from junior and play an NHL game. So kudos to him for stepping up there," Horvat said. "And honestly, I think he played a heck of a game. He made some unbelievable saves out there. We hung him out to dry for a lot of those goals and he had no chance on them."

Canucks: Start a three-game California swing at Anaheim on Wednesday.