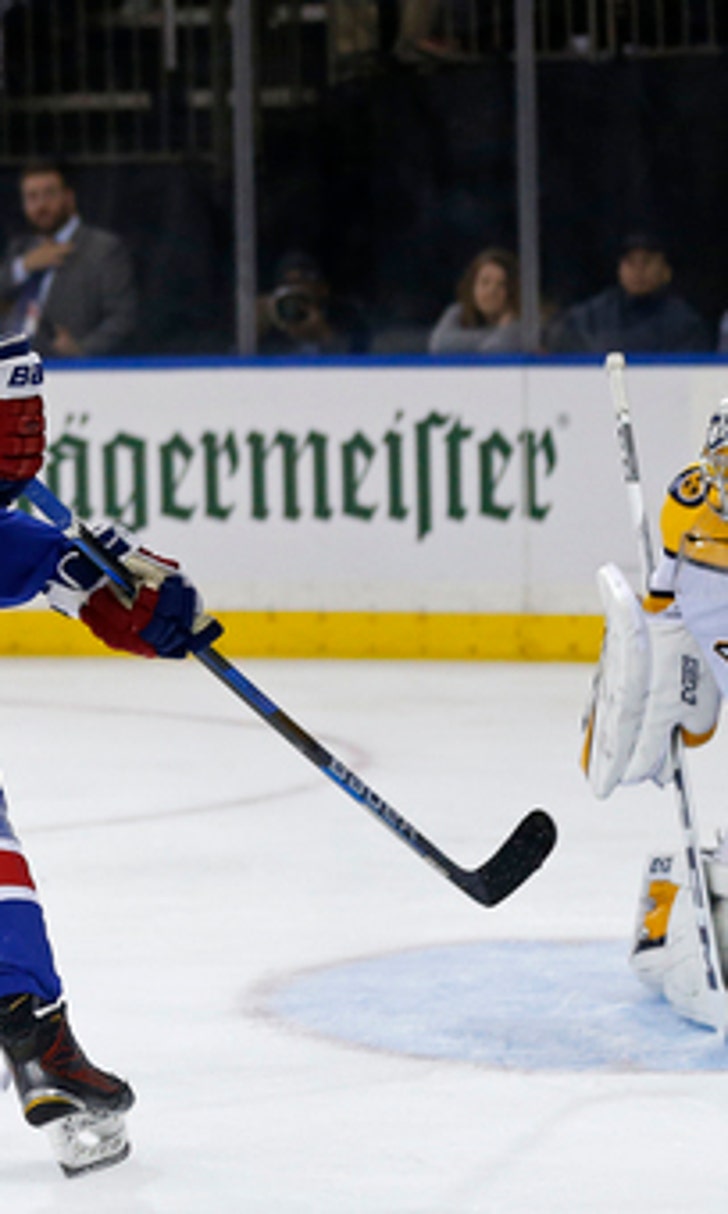 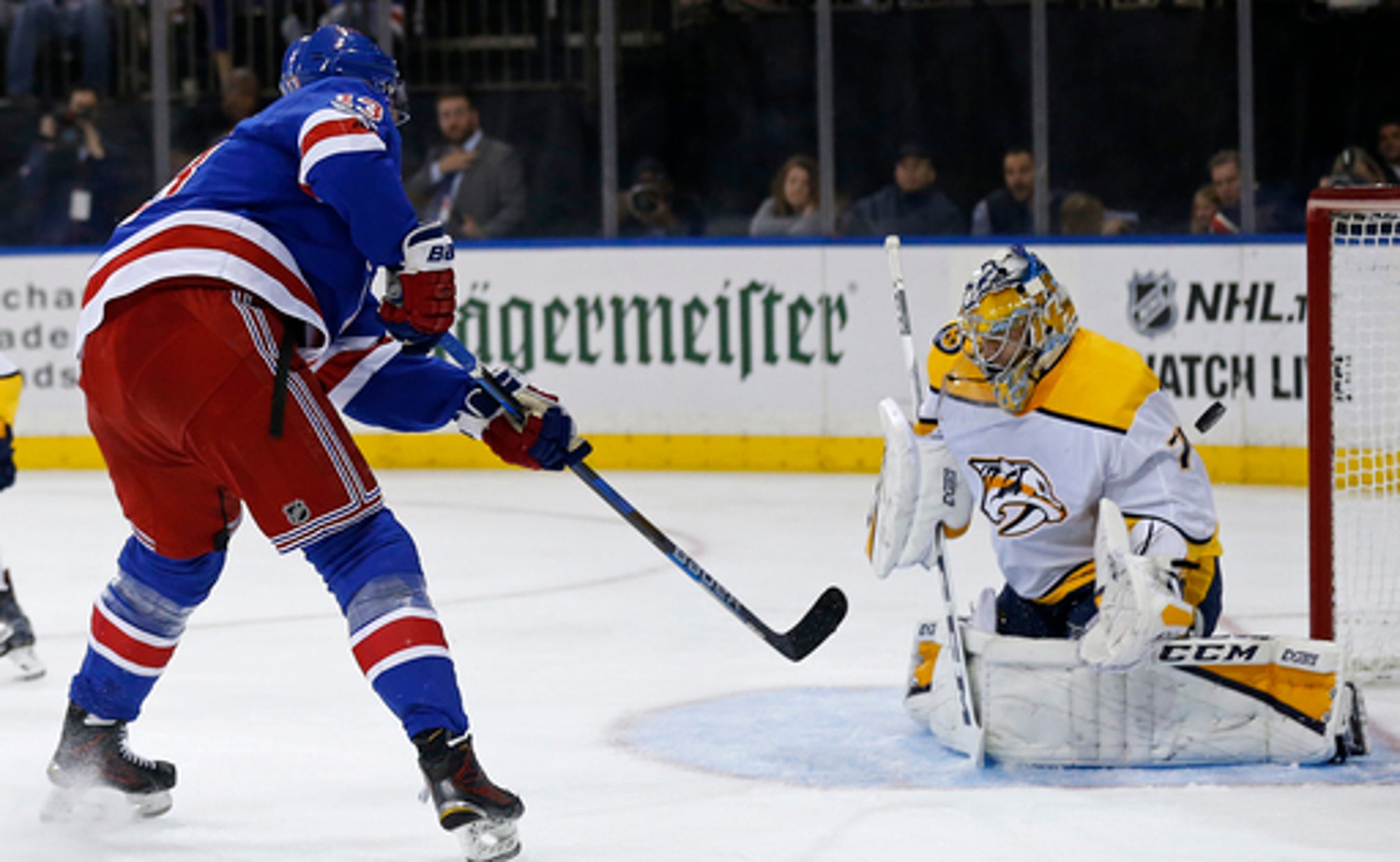 NEW YORK (AP) The New York Rangers can finally breathe a sigh of relief after holding off the Nashville Predators for just their second win of the season.

Kevin Hayes and Jimmy Vesey each had a goal and an assist to help the Rangers snap a five-game skid with a 4-2 win over the Predators on Saturday afternoon.

Chris Kreider added a power-play goal and David Desharnais extended his point streak to four games as the Rangers, 0-3-2 in their previous five, have now earned points in three straight games.

''You can do so many good things to try and get confidence, to try and get a good feeling in here but in the end, it comes down to winning games,'' said Rangers goaltender Henrik Lundqvist, who made 23 saves. ''We have had a couple of games now where we have been close, it was just a matter of time. Finally, we get the two points here, take a deep breath and then we go after another two points Monday.''

Mattias Ekholm and Fillip Forsberg each scored for Nashville, and Juuse Saros made 11 saves for the Predators.

''We are in the collecting points business,'' Predators coach Peter Laviolette said as the Predators concluded a two-game Eastern Conference trip. ''Today we collected zero.''

The Rangers, who have struggled in first periods this season by allowing 13 goals in nine games, earned a two-goal advantage at the end of the first 20 minutes. The Rangers had three two-goal leads - 2-0, 3-1 and 4-2 - on Saturday, after having just one multigoal advantage previously this season when they beat the Montreal Canadiens 2-0 at home on Oct. 8th.

Jesper Fast got his first of the season just 5:12 into the game as New York scored the first goal for only the fourth time in nine games.

Predators defenseman Alexei Emelin had trouble controlling a bouncing puck and Hayes was able to race up ice for a breakaway opportunity. Fast trailed the play and cashed in on the rebound.

After killing off three penalties of their own in the first 20 minutes, the Rangers' power-play unit doubled their lead at 19:34. J.T. Miller was able to slip out of the corner with control of the puck and fed a wide-open Chris Kreider in front.

Lundqvist picked up career victory No. 407 and is now tied with Glenn Hall for ninth place on the NHL's all-time wins list.

Early in the middle period, the Predators were able to cut the deficit in half. Defenseman Mattias Ekholm was able to walk into the slot all alone and blasted a slap shot past Lundqvist at the 1:44 mark of the second period.

However, later in the middle period, Hayes danced around defenseman Matt Irwin, and beat Saros on the short side with a pretty backhand(equals)forehand maneuver to help the Rangers regain a two-goal advantage with 7:14 left. Vesey and Brady Skjei assisted on the play.

''I think since I put that line together with Jimmy (Vesey) and Jesper (Fast), it's a real hard working line,'' Rangers coach Alain Vigneault said. ''It's simple, north-south, get it in deep, work the corners, work on the forecheck. I think Kevin with his size and his hockey smarts, he fits in real well. The last couple of games, he's gotten big goals for us and I want that to continue for sure.''

The Predators cut the Rangers lead in half once again with 4 1/2 minutes left in the period as Forsberg deflected Roman Josi's soft wrister for his his sixth of the season.

Vesey added an empty-netter, his first goal, in the final minute to secure the victory for New York.

The Predators have lost four consecutive games at MSG with their last win coming December 10, 2013.

''We had a lot of chances but couldn't convert,'' Josi said. ''It was a matter of execution.''

NOTES: Lundqvist became the 20th NHL goalie to appear in 750 games and became the third to accomplish that feat with one team (Martin Brodeur, Devils and Tony Esposito, Blackhawks). ... Rangers D Marc Staal skated in his 698th game, tying Mark Messier and Steve Vickers for 12th on the franchise's all-time games played list. ... The Rangers' sellout streak ended at 279 games, including 47 in the postseason, dating back to Nov. 3, 2011. ... Nashville placed C Nick Bonino on injured reserve Friday with a lower-body injury. ... D Yanick Weber was activated from injured reserve Friday, and skated in his first game since suffering an upper-body injury on October 12th against the Stars.