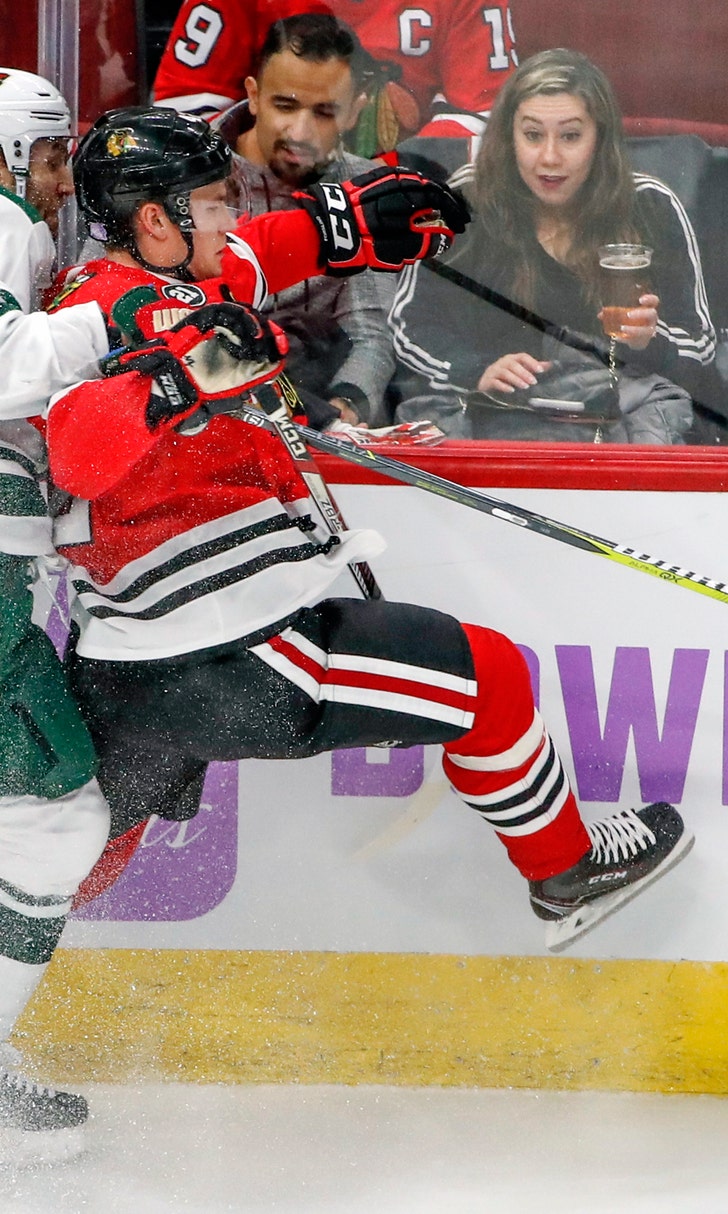 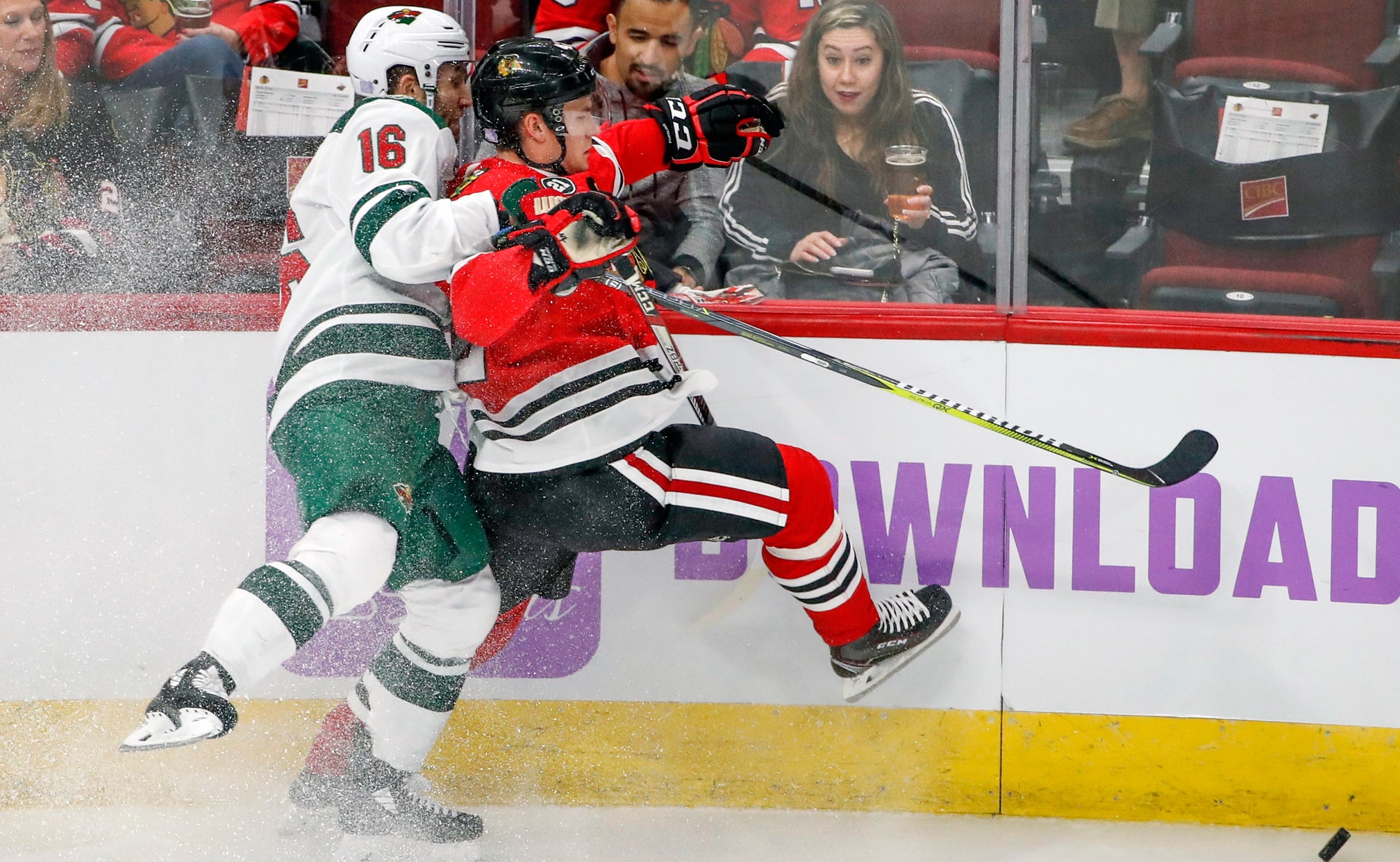 CHICAGO (AP) — The Chicago Blackhawks got off to a fast start and then leaned on Corey Crawford to pull out a sorely needed win.

Jonathan Toews and Brandon Saad scored first-period goals, Crawford made 39 saves and Chicago held on to defeat the Minnesota Wild 3-1 on Sunday night.

Dominik Kahun added an empty-netter with 58.5 second left as the Blackhawks improved to 2-2-2 under coach Jeremy Colliton, who replaced Joel Quenneville on Nov. 6. Patrick Kane had two assists for Chicago, 2-0-2 in its last four games.

"There's no secret (Crawford's) great," Colliton said. "He can make the saves that keep you in a game."

"I still think (Crawford) made some big stops for us tonight," Toews added. "You always need that, especially on some crucial penalty kills."

Crawford had to be flawless after Minnesota's Zach Parise scored in the second period to cut it to 2-1. The Wild controlled the play throughout the rest of the game, but the goalie said he was able to see Minnesota's shots and his teammates were limiting rebounds.

"That's key," Crawford said. "Box guys out and let me take the shot. We do a good job of that, taking away their players for rebounds."

The Blackhawks seem to be slowly getting used to Colliton after 10 years under Quenneville, who is second in NHL history with 890 coaching wins.

"More and more we seem to be on the same page," Toews said. "All five guys are kind of in the picture. It's a process, but we're making good headway."

Minnesota lost its second straight game and fell for the third time in four games. Backup Alex Stalock stopped 25 shots for Minnesota as usual starter Devan Dubnyk got the night off in the second of back-to-back games.

Parise has six goals in his last nine games and has scored in two straight. His goal in a 3-2 loss to Buffalo on Saturday was the 341st of his career and made him the highest-scoring Minnesota-born NHL player.

But no other Wild player solved Crawford.

"After the first period . we were the better team," Minnesota coach Bruce Boudreau said. "But it's too little, too late.

"Tonight we had the opportunities, don't get me wrong. In the third period we had some really good chances and really good looks, but it just wasn't there."

Wild forward Marcus Foligno left the game at 7:13 of the third period after getting hit in the right leg by a shot by Chicago's Brent Seabrook. Foligno crumpled to the ice and had to be helped off.

After the game, Foligno said X-rays were negative, but the impact caused him to lose feeling in his leg briefly. Foligno hopes to play Wednesday against Ottawa.

Chicago took a 2-0 lead in the first period.

Toews opened the scoring 8:26 in with a power-play tip-in from the left edge of the crease. Toews slipped past Wild defenseman Matt Dumba, and then Kane threaded a pinpoint pass from the right circle across the front of the crease to the blade of Toews' stick.

Saad made it 2-0 with 2:31 left in the period. When Dumba couldn't handle a wobbling puck near left wing boards, Saad powered past, drove to the net, cut across the crease and beat Stalock with a backhander.

Parked in front of the net, Parise deflected Mikko Koivu's feed form the right corner for power-play goal at 7:56 of the second to cut it to 2-1.

The Wild dominated the rest of the period, pinning Chicago in its end for stretches and forcing Crawford to make several tough, close-in saves to maintain the lead. Crawford was tested again in the third, as Minnesota outshot Chicago 14-5.

NOTES: Kane turns 30 on Monday. The Blackhawks drafted the star forward, now in his 12th NHL season, first overall in 2007. ... The Blackhawks honored broadcaster, Chicago native and 16-year NHL veteran Eddie Olczyk before the game with a "One More Shift" pregame ceremony on Hockey Fights Cancer night. The 52-year-old Olczyk was Chicago's first-round draft pick (third overall) in 1985, and underwent surgery and follow-up treatment for colon cancer last year. ... Foligno was turned on Seabrook's shot and the puck struck him on the side of the leg where a shin guard has little protection. "I was too sore to kind of come back and didn't have much power," Foligno said. ... Minnesota C Joel Eriksson Ek, a 2015 first-round draft pick, was back in the lineup Sunday after being a healthy scratch for the first time on Saturday. Eriksson Ek had missed six games earlier with a lower-body injury. ... Chicago veteran LW Chris Kunitz was a healthy scratch. D Jan Rutta returned after sitting out two games.

Blackhawks: At Washington on Wednesday.