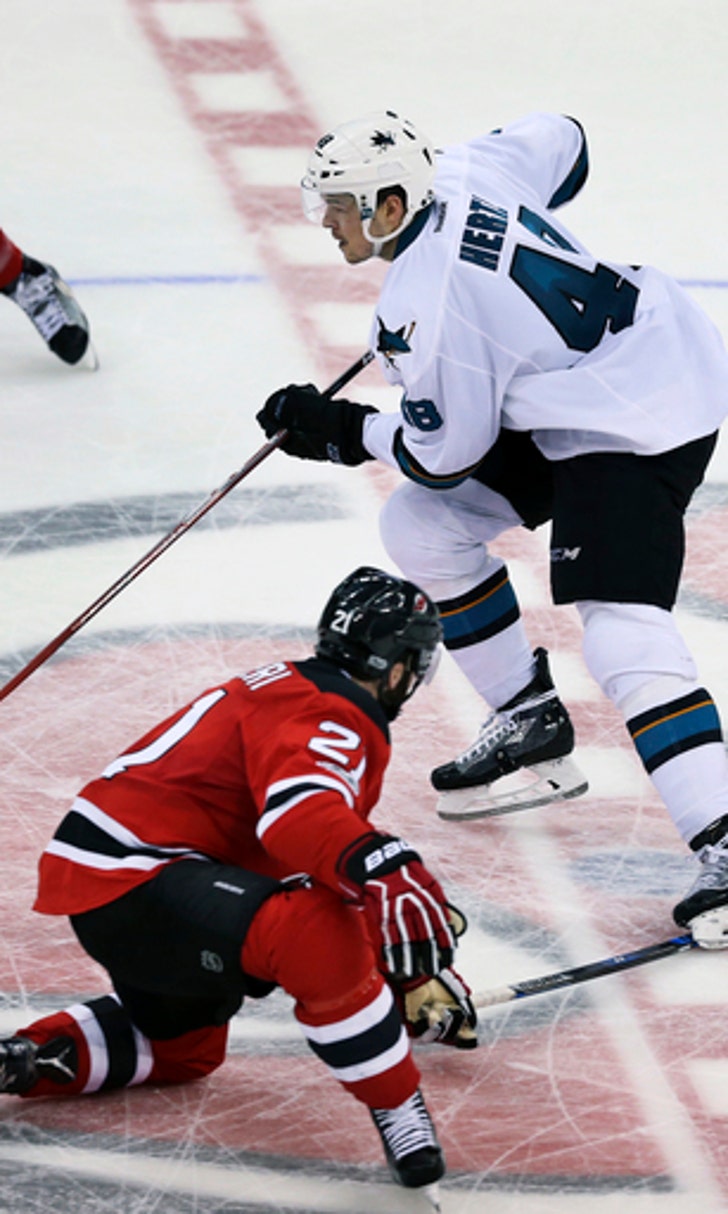 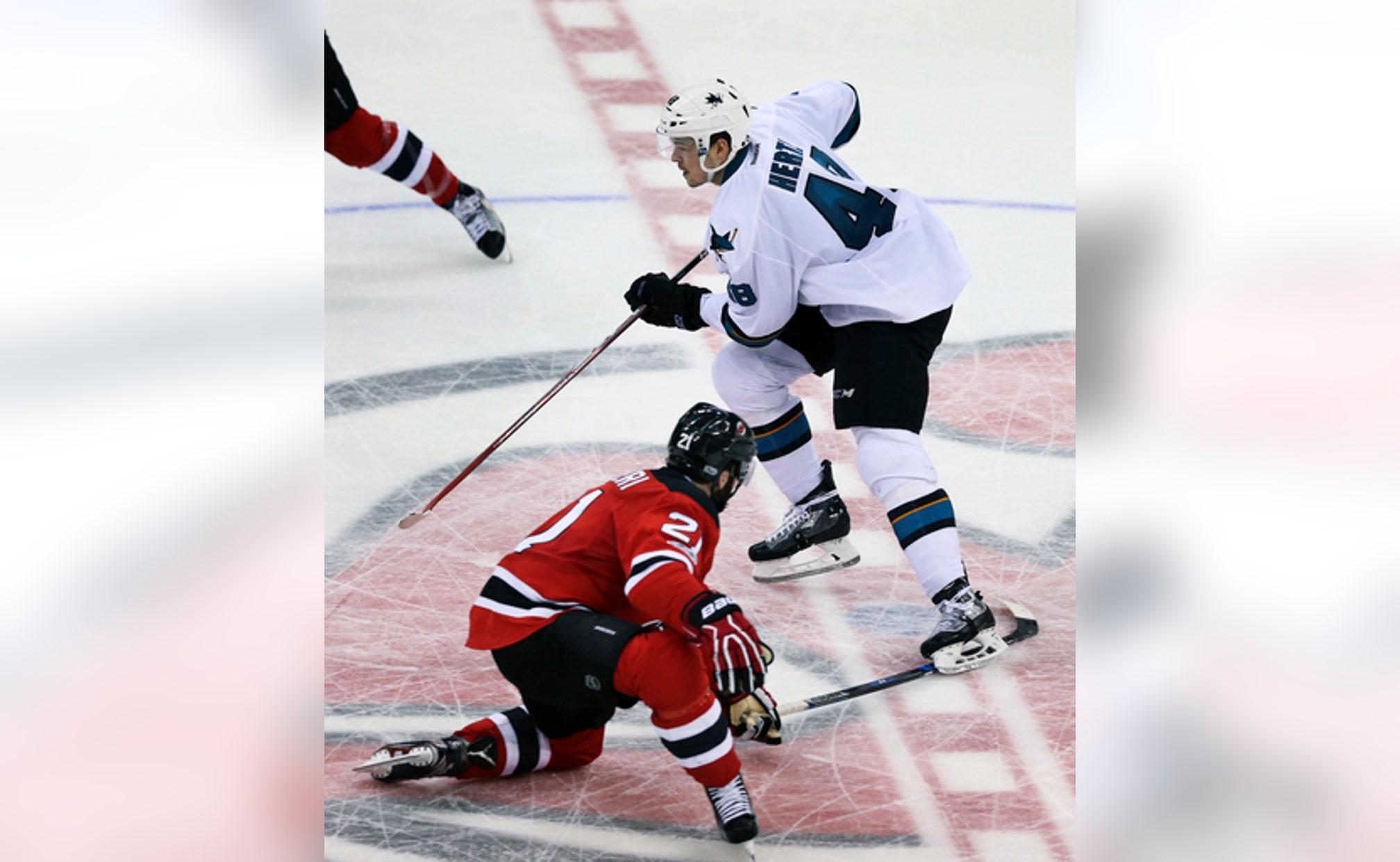 NEWARK, N.J. (AP) The stat line on Brent Burns reveals all one needs to know about the San Jose Sharks' victory over the New Jersey Devils.

Burns scored the tying and winning goals, played a game-high 25:46 minutes, took 11 of the Sharks 38 shots and blocked three shots in his own end.

It produced a 4-1 victory on Sunday, snapping the Sharks' four-game losing streak.

The extraordinary has become the norm for the NHL's leading offensive defenseman.

''He's the best player on the ice every night,'' said teammate Joe Thornton, who also scored a goal. ''It doesn't matter who you play. It's very impressive to watch.''

Burns has 24 goals and his 59 points are only two behind overall leader Connor McDavid.

''No, not really,'' Burns said in his usual low-key fashion when asked if he focused on the scoring title. ''I think you look at everything. You're looking at other guys on your team, the other guys you're playing. We hear about it all the time from you guys about stats.''

Martin Jones made 21 saves as San Jose bounced back from a 2-1 overtime loss to Philadelphia on Saturday.

PA Parenteau scored for the Devils and Corey Schneider made 34 stops as New Jersey lost for the eighth time in the last nine home games.

Burns wiped out the Devils' lead with his second-period tallies.

The defender ripped a wrist shot over Schneider's glove at 2:27 to knot the score.

Burns unleashed another of his laser wristers, this time off the left post and into the net, at 7:46 to give the Sharks the lead.

''Both were kind of the same,'' Burns said. ''Good work down low by the forwards getting it up to the blueline. Then it's just traffic and shooting.''

Sounds simple, yet so hard to stop.

The Devils knew what was coming - and who was shooting - but were powerless to prevent it.

''That's the kind of player he is,'' Schneider said of Burns. ''There's not many like him, especially from the back end who can change the course of a game. It's plays like that. He can join rush, stickhandle through the whole team. There are point shots he can make that very few, if any, defenseman in the league can make.

''We wanted to key on him and make sure he didn't have an impact on the game. But he did.''

Thornton added the third Sharks goal in the period at 11:22.

The Devils tried to rally late in the period as Taylor Hall and Stefan Noesen had close-in chances denied by Jones.

The Sharks peppered the Devils with shots over the first 20 minutes, holding a 19-3 advantage, but New Jersey got the only goal.

Parenteau scored on the Devils' first shot at 11:42 as Jacob Josefson made the key play, riding Sharks defenseman Brenden Dillion off the puck behind the San Jose net.

Parenteau knocked in his 13th of the season on the goalmouth scramble that ensued.

The Devils, coming off a five-day bye, were a beat slow at the start and the Sharks pressed hard.

San Jose had a golden opportunity with a 5-on-3 power-play for 1:43 when Ben Lovejoy joined Joseph Blandisi in the penalty box at 8:28.

Schneider made two stellar stops against Burns on the penalty kill - one with the glove, the other with his pads - to hold off the Sharks.

''I think Schneider was spectacular early,'' Thornton said. ''He made some great stops. We just kept throwing pucks at him, screening him and eventually they went in.''

NOTES: New Jersey recalled Blandisi from Albany of the AHL on Saturday. . The Devils also activated D John Moore from injured reserve after missing 17 games with a concussion. . C Logan Couture was back for the Sharks after missing one game with an upper-body injury. . The Devils scratched D Kyle Quincy and RW Devante Smith-Pelly. . The Sharks' scratches were RW Marcus Sorensen, D Tim Heed and RW Joonas Donskoi. . Patrick Marleau's point-scoring streak for San Jose ended at nine games.