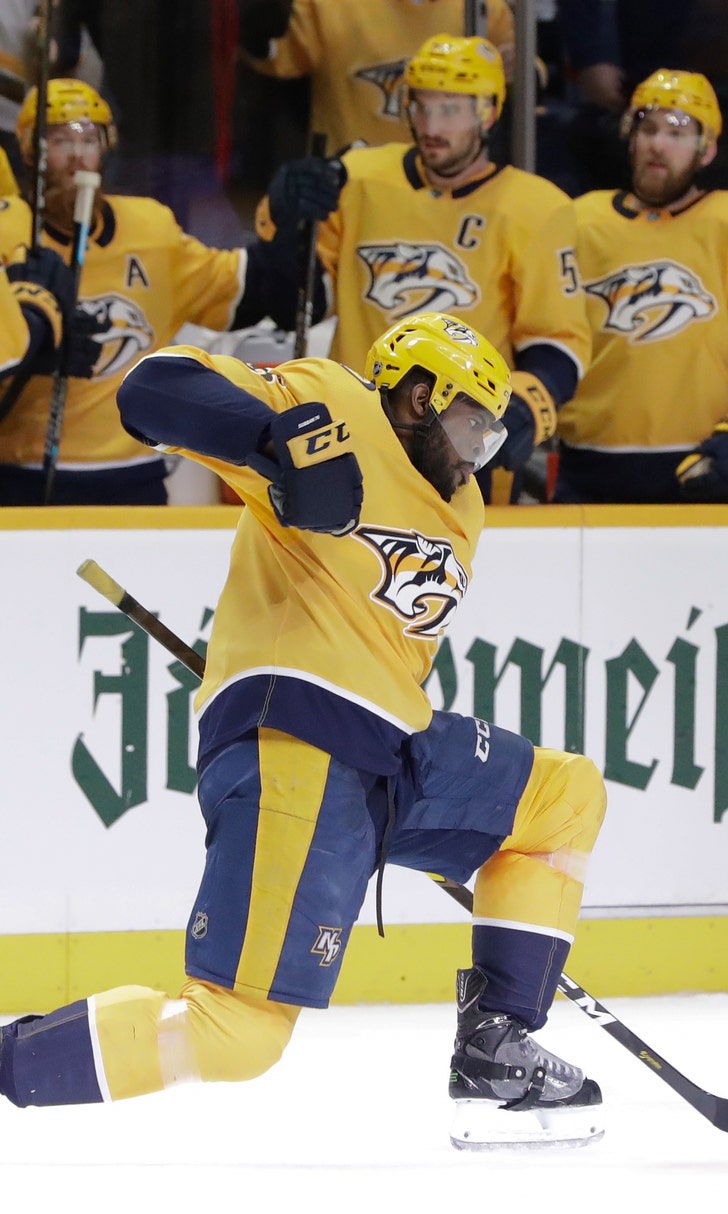 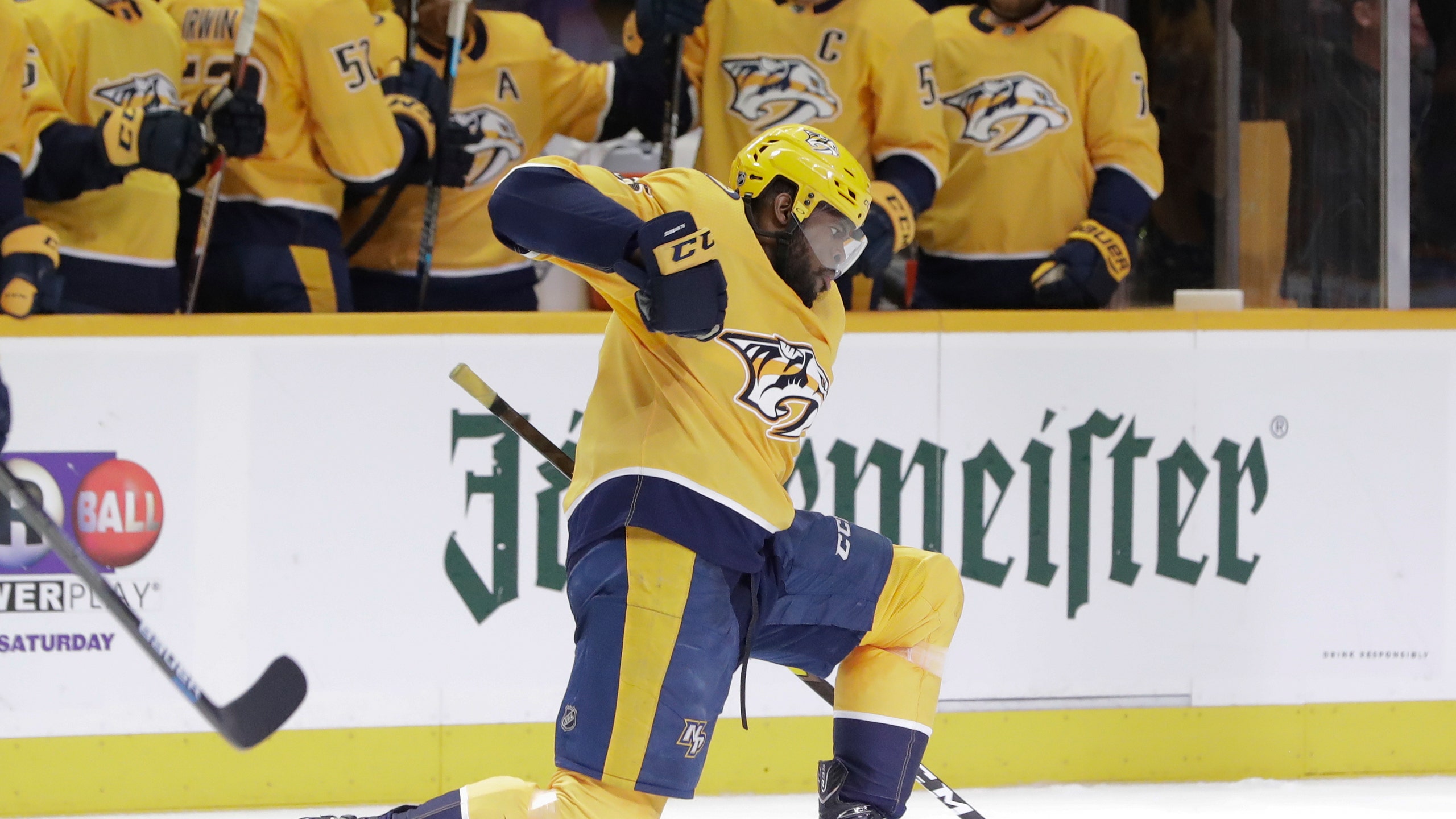 NASHVILLE, Tenn. (AP) — Playing hours after the NHL trade deadline isn't easy, and a pair of late deals left the Nashville Predators short a couple of forwards — forcing coach Peter Laviolette to use a defenseman on his fourth line.

Then the Predators went out and hit at least six posts, including two in the shootout.

Brian Boyle scored in the fourth round, though, and Nashville edged the Edmonton Oilers 3-2 on Monday night.

"As an athlete, you ask for opportunities, and different guys got some," Boyle said. "Pretty deep team, pretty good team here. You kind of have to block out any kind of distractions. You have teammates go, it's tough, but you've got a job to do. It's part of this business."

P.K. Subban had a goal and an assist after missing the morning skate because of an illness. Colton Sissons also scored as the Predators won for the third time in four games to pass Winnipeg for first place in the Central Division. The Jets have three games in hand.

Pekka Rinne made a pad save on Ty Rattie when the Oilers forward tried to extend the shootout.

Kyle Turris and Ryan Ellis each hit the post as the first two shooters for Nashville in the tiebreaker. After Filip Forsberg scored for the Predators, Sam Gagner forced the shootout to sudden death.

The Predators were a bit short-handed hours after the NHL trade deadline because of a pair of deals that sent Kevin Fiala to Minnesota for Mikael Granlund, and Ryan Hartman to Philadelphia for Wayne Simmonds. Granlund's fiancee was in labor Monday, while Simmonds is expected to join Nashville in time for Tuesday night's game in St. Louis.

That left Laviolette using a fourth line of Cody McLeod, Frederick Gaudreau and defenseman Matt Irwin at forward, while defenseman Matt Donovan made his Predators debut after being called up earlier Monday.

"We have enough veteran guys on the team that have gone through trade deadline before," Subban said. "We just wanted to focus on what we had to do. We've got a job to do and we're at home and we want to get some more wins at home, too. We've dropped enough wins this year at home, so we wanted to focus."

The Oilers played without star center Connor McDavid, who sat out the second and last game of his NHL suspension for an illegal hit to the head.

"We did pretty good tonight," Edmonton forward Alex Chiasson said. "We did a good job, guys buying in, playing the right way. It came down to the wire obviously in the shootout, so it's been a lot of positives lately."

Draisaitl took the puck away from Forsberg in the neutral zone and took off on a breakaway before beating Rinne with a backhand for his 37th goal this season and 10th in 10 games in February just 2:08 into the game. Oilers goalie Mikko Koskinen made that 1-0 lead stand up through the rest of the period with 10 saves, including a late flurry.

"It wouldn't matter if Connor was in or not," Edmonton coach Ken Hitchcock said of Draisaitl. "He's taking his game to another level. He's embraced the details of being a really good player. He's bought in to what the coaches want. And it's made him more effective on a daily basis."

Sissons finally got Nashville on the board at 11:43 of the second, scoring past a diving Koskinen off a rebound of a shot by Rocco Grimaldi. Subban gave the Predators their first lead 84 seconds later with a slap shot from the blue line that beat Koskinen's glove for his sixth of the season.

Koskinen gloved a shot from Forsberg on a 2-on-1 break late in the second.

Draisaitl tied it at 9:12 of the third on the power play, scoring off a rebound.

NOTES: Rinne earned the 334th regular-season win of his career, passing Nikolai Khabibulin and Gump Worsley for sole possession of 22nd place in NHL history. ... Draisaitl extended his point streak to seven games (10 points). He has six goals during that span. ... The Predators placed defenseman Dan Hamhuis on injured reserve. ... Country music star Garth Brooks, sitting in a box beside Wayne Gretzky, stood up when his hit "Friends in Low Places" played in the third period.

Predators: At the St. Louis Blues on Tuesday night.