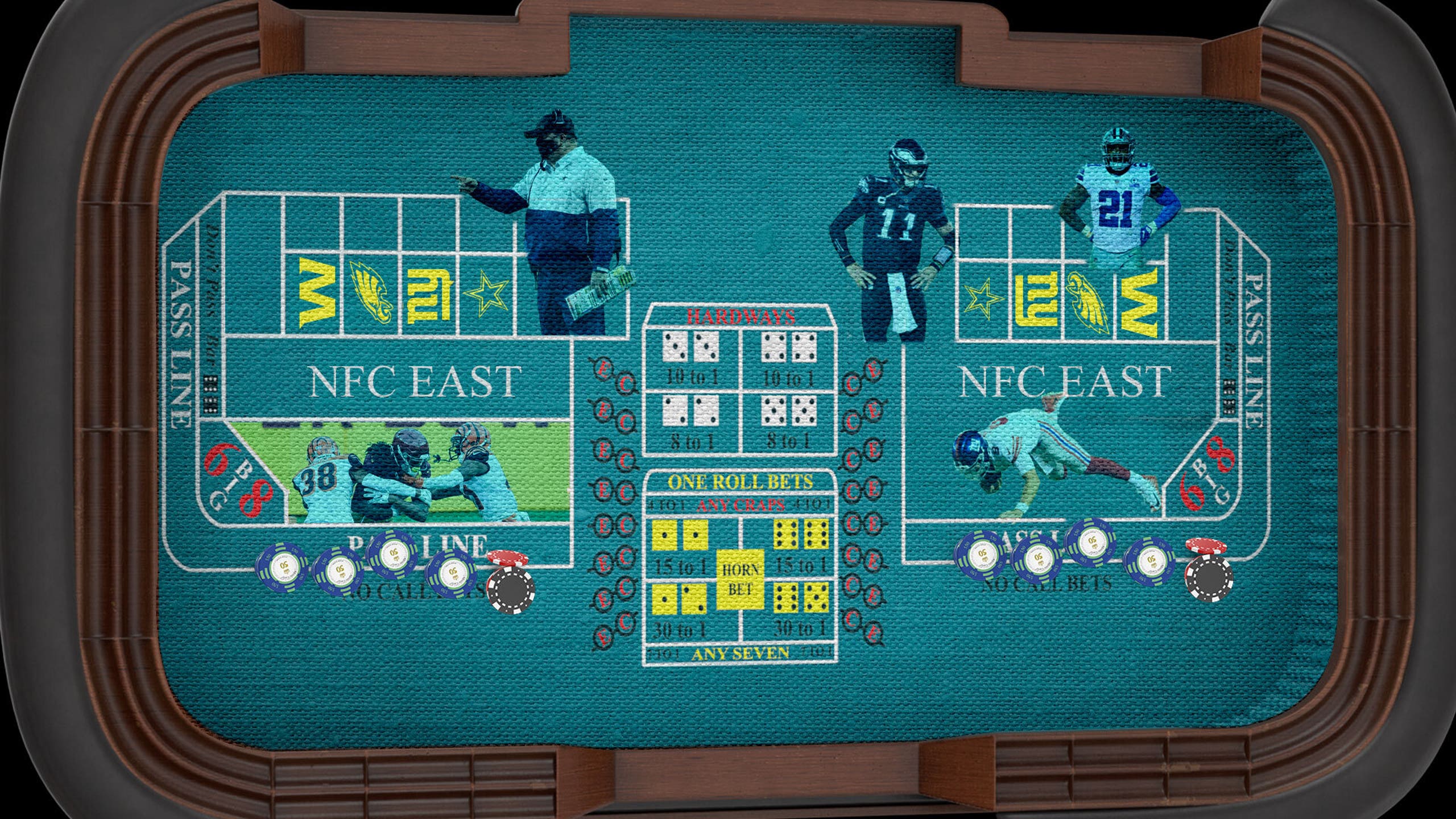 Twelve weeks down, five left to go. Time for the NFL playoff push in earnest. Let’s get to the wagers, with all odds via FOX Bet.

I hate myself for this, as I’ve repeatedly told myself that I will not bet on the Falcons, but I think they win this game at home in a revenge spot against the Saints.

Two weekends ago, the Falcons went to New Orleans and did not play well on offense, losing 24-9. Atlanta allowed eight sacks, six hits and eight hurries on Matt Ryan, with a majority of those sacks attributed to Ryan himself. The protection was good, but Ryan had no one open or just didn’t pull the trigger when the opportunity was there.

They were embarrassed against a division rival and have a chance to show that’s not who they are this weekend.

Make no mistake, the Saints pass rush is elite and has gotten better as the season nears its conclusion so it won’t be easy for the Falcons offense. But I’ll wager they improve from their performance two weeks.

Also something to note – while the Falcons aren’t excellent at converting red zone opportunities into touchdowns, the Saints defense is second to last in the NFL in the red zone. If the Falcons can get the ball into the red zone, they should score.

On the other side, let’s talk about the Falcons defense since Dan Quinn was fired and Raheem Morris took over in Week 6.

Atlanta went from allowing 32 points per game in the first five weeks of the season to allowing only 20 per game in their next six. Their defensive expected points added, a great efficiency tool to measure overall success of a unit, is sixth in the NFL over that time.

Now, they face an extremely one-dimensional Saints offense with Taysom Hill at quarterback. that moves the ball with Hill on the ground — and when they do pass, it’s an adventure.

There’s a huge advantage for the Falcons in seeing how the Saints attacked them in this non-traditional offense just two weeks ago. The Falcons will be prepared to see it again, so I believe the Saints will struggle to score this weekend.

This one is simple: I get to wager on Bill Belichick against Anthony Lynn.

By all accounts, including what we saw in "Hard Knocks," Lynn is a fantastic human. He’s just an awful head coach.

The Chargers are AWFUL at the end of a half or to finish a game. They look as though they’ve never practiced football and when you have an opportunity to fade Lynn against the greatest coach of all time, you do it. 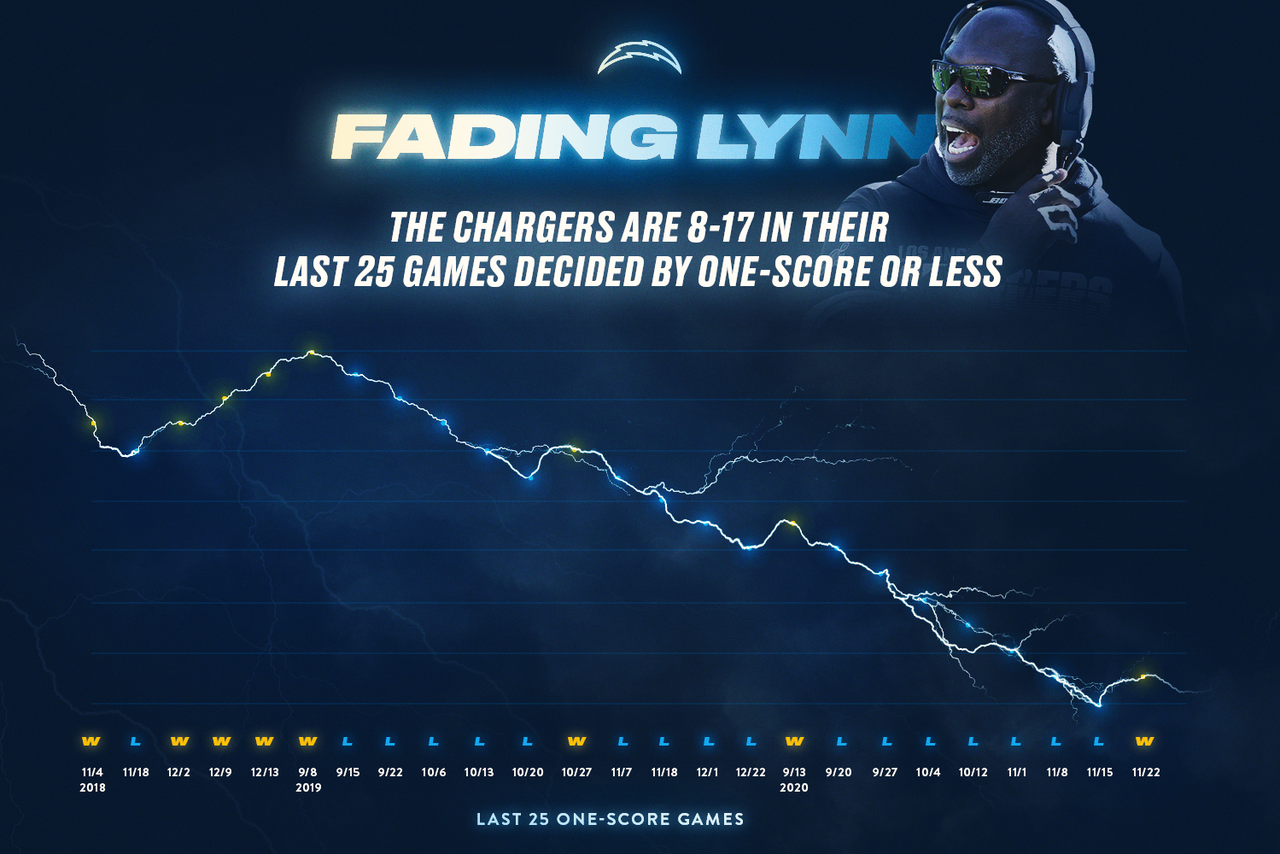 What is so sad about the Chargers is they have a playoff-caliber roster with a young quarterback who’s been just outstanding. Justin Herbert has six games of 300 plus yards, tying him for the rookie record. But their play calling is conservative and they blow leads late. Even the lowly Jets covered against them two weeks ago.

The Chargers have a better roster than the Patriots, but they often don’t play like it. The one part of the game we often forget is special teams, but it’s a direct result of excellent coaching. The top five units in the NFL are Miami, Baltimore, Seattle, New England and New Orleans. The worst unit in the NFL? You guessed it. It’s the Chargers.

Lastly, Lynn admitted to his team they are out of the playoffs, even though they aren’t eliminated yet. The players aren’t stupid. They understand the long odds. But come on coach, you aren’t supposed to admit it. Just another example of a coach who doesn’t get it.

This number opened much closer to a field goal, so there’s not much value here. But until the number gets to seven, I’d take the Titans.

According to Football Outsiders and their DVOA metric*, the Browns are the worst 8-3 team since they’ve been measuring efficiency. The Browns’ -21 point differential is also the worst by any 8-3 or better team in their first 11 games in NFL history — and that's all against the 29th easiest schedule in the NFL. They should not be 8-3.

*Defense-adjusted Value Over Average (DVOA) system breaks down every single NFL play and compares a team's performance to a league baseline based on situation in order to determine value over average.

Now, they head to Nashville to face a Titans team that reminds me of the Tennessee team to end last season. Derrick Henry has been on fire the last three games, averaging 5.59 yards per attempt.

Henry gathers strength in the second half of the season, as the weather gets colder and injuries start to pile up defense. And he's going against a Browns rushing defense that’s 20th in rushing DVOA and have allowed a first down via the rush 33 percent of the time, good for 21st in the NFL.

Don’t forget about Ryan Tannehill, either, by far the best passer the Browns have faced in good weather in the last month. (Remember, they played Derek Carr and Deshaun Watson in bad weather at home.)

I have been worried about the Titans defense, as they’ve struggled at times to get off the field. But now they face one of the worst passing offenses in the NFL. The Browns don’t even trust their quarterback, and it shows in the offense. If they fall behind, can they catch up? I’d say no. The Titans win by a touchdown.

Moving this number through two important numbers, 10 and 7, is a fantastic move. The Bengals are bad, and even worse without Joe Burrow. They play on the road against a Dolphins team that’s well coached, great on defense and I don’t care who’s playing quarterback. It does not matter against the Bengals.

The Seahawks have a short week after a sluggish Monday Night Football win against the Eagles, but the Giants are coming to town without their starting QB. The Seahawks defense has started to play better with the addition of Carlos Dunlap and the return of Jamal Adams from injury. I just need Seahawks to win by 3, and I’ll take it.

The Cardinals have lost five games and only one of those by more than a touchdown. They keep games close because of Kyler Murray and their good-enough defense. The Rams are coming off a loss to the 49ers, so I expect them to come out strong. However, the Cardinals need this win also. It’s a close game.

The NFC East is not winning a game this weekend and I’m going to wager on it. Give me a straight money line parlay of the Packers, Seahawks, Steelers and Baltimore.

Who Is Nick Sirianni?
The Eagles have their new head coach. But who is the man tasked with solving Carson Wentz and Philly's long list of issues?
9 hours ago

Pressure Point
With the NFC's Super Bowl berth at stake, two top QBs are feeling the heat, but who is under the most pressure?
15 hours ago