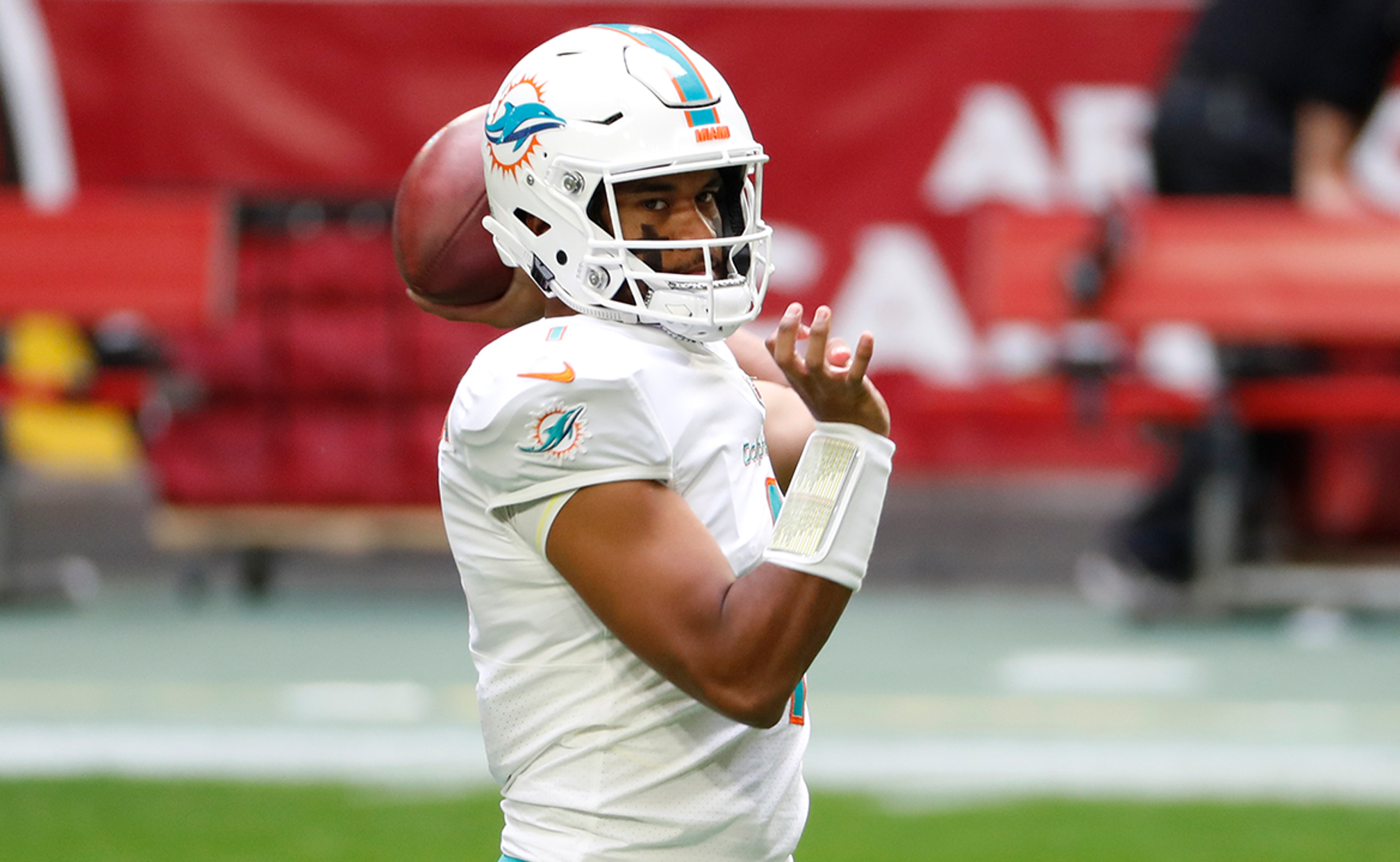 The Miami Dolphins' matchup with the Los Angeles Chargers was touted as a must-see tilt between two rookie quarterbacks who were taken with the fifth and sixth picks in the 2020 NFL Draft.

But only one could emerge victorious – and it was the one that's quickly becoming accustomed to winning.

With the 29-21 win over the Chargers, the Dolphins recorded their fifth straight victory, and with seven games remaining in the regular season, Miami (6-3) has already eclipsed its win total from last season (5-11).

Individually, Tagovailoa got the better of Chargers quarterback Justin Herbert by a thin margin, throwing for 169 yards, two touchdowns and no interceptions on Sunday.

Herbert completed 20 of 32 passes for 187 yards, two touchdowns and a pick.

But where Tua has Herbert beat unequivocally is in the winning deparment, considering that since Tagovailoa took over as the starter in Miami, the Dolphins have yet to lose.

In three games, he's completing 63.3 percent of his throws for five touchdowns, and he's yet to throw an nterception.

Tua joined Philadelphia's Carson Wentz as only two rookie quarterbacks in the Super Bowl era to win their first three starts while not throwing a pick.

And according to Nate Burleson of ESPN's Good Morning Football crew, Tagovailoa's efficiency, coupled with his ability to be a playmaker for the Dolphins offense, is the team's key to keeping its win streak alive.

"Tua looked good. His ability to move inside in the pocket, extend the play, that's what we know he can do ... He takes care of the ball. The fact that he's playing efficient football, as a rookie, speaks to why he's undefeated as a starter."

Tagovailoa's efficient approach is complimented by the play on the other side of the ball, as the Miami defense overwhelmed the Chargers.

Herbert was hit eight times and Miami defensive end Emmanuel Ogbah had a sack in his sixth consecutive game.

Herbert was also picked off by Dolphins cornerback Xavien Howard, who earned his fifth interception of the season, which trails only New England’s J.C. Jackson (6) for most in the NFL.

Howard’s interception also marked Miami’s 15th straight game forcing a turnover, and the Dolphins are tied for the fourth-most takeaways in the league (15).

On top of all of that, Miami is allowing a mere 17.2 points per game over the course of its five-game win streak, which is a league-best in that time span.

And because Miami's defense is so stout, Colin Cowherd argues that Tagovailoa was the answer when it came to elevating this team even further.

"This is why Brian Flores went with Tua. He was sitting at practice going, 'We have great special teams and a great defense, and if we don't turn it over, we're a tough out.' Tua is perfect for this team. With Ryan Fitzpatrick, Miami was prone to mistakes ... [Now] they don't make any mistakes."

With Tua leading the way, Miami is just a half-game behind Buffalo (7-3) for first place in the AFC East.

Both teams have three losses – Buffalo defeated the Fitzpatrick-led Dolphins in Week 2, 31-28 – and a Dolphins-Bills regular-season finale is set for Jan. 3.

The Bills might be favored (-333) to win the division, but the Dolphins (+300) are right on their heels, with their next three opponents – the Broncos, Jets and Bengals – owning a combined record of 2-22-1.

In a few weeks, Miami could very well find itself at 9-3, and potentially looking past just an AFC East title, with its attention turned towards a deep playoff run.

It will all depend on how far the rookie can take them.