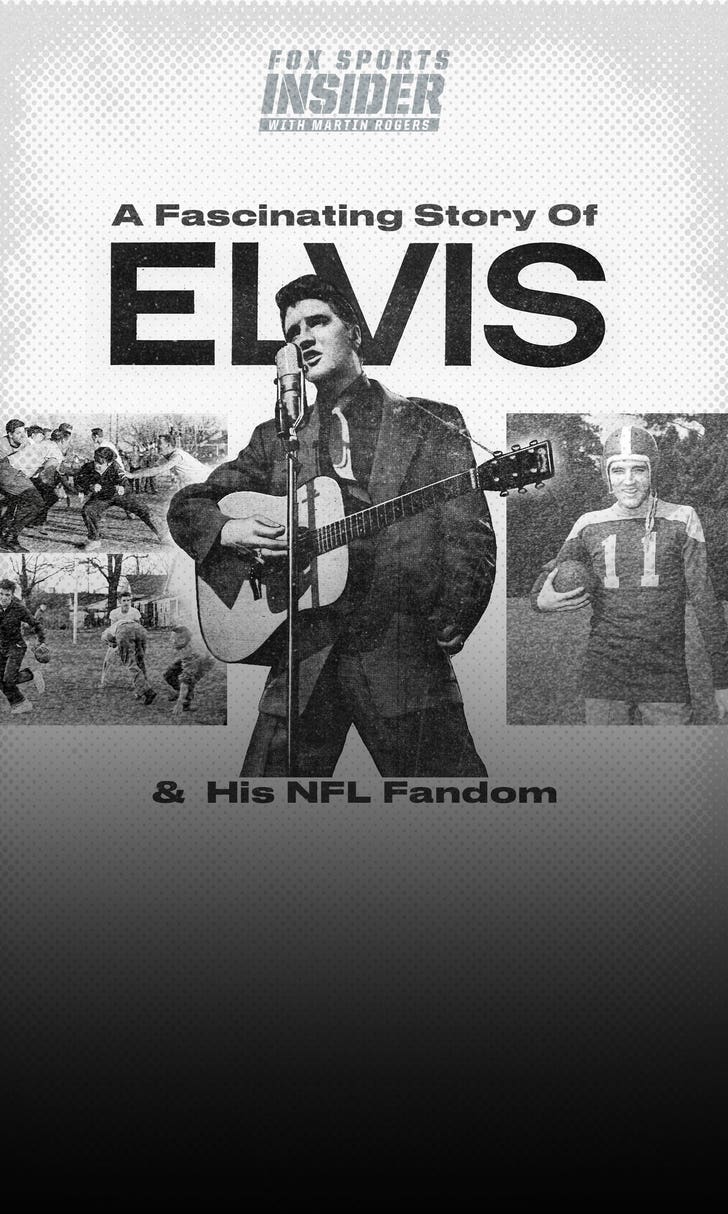 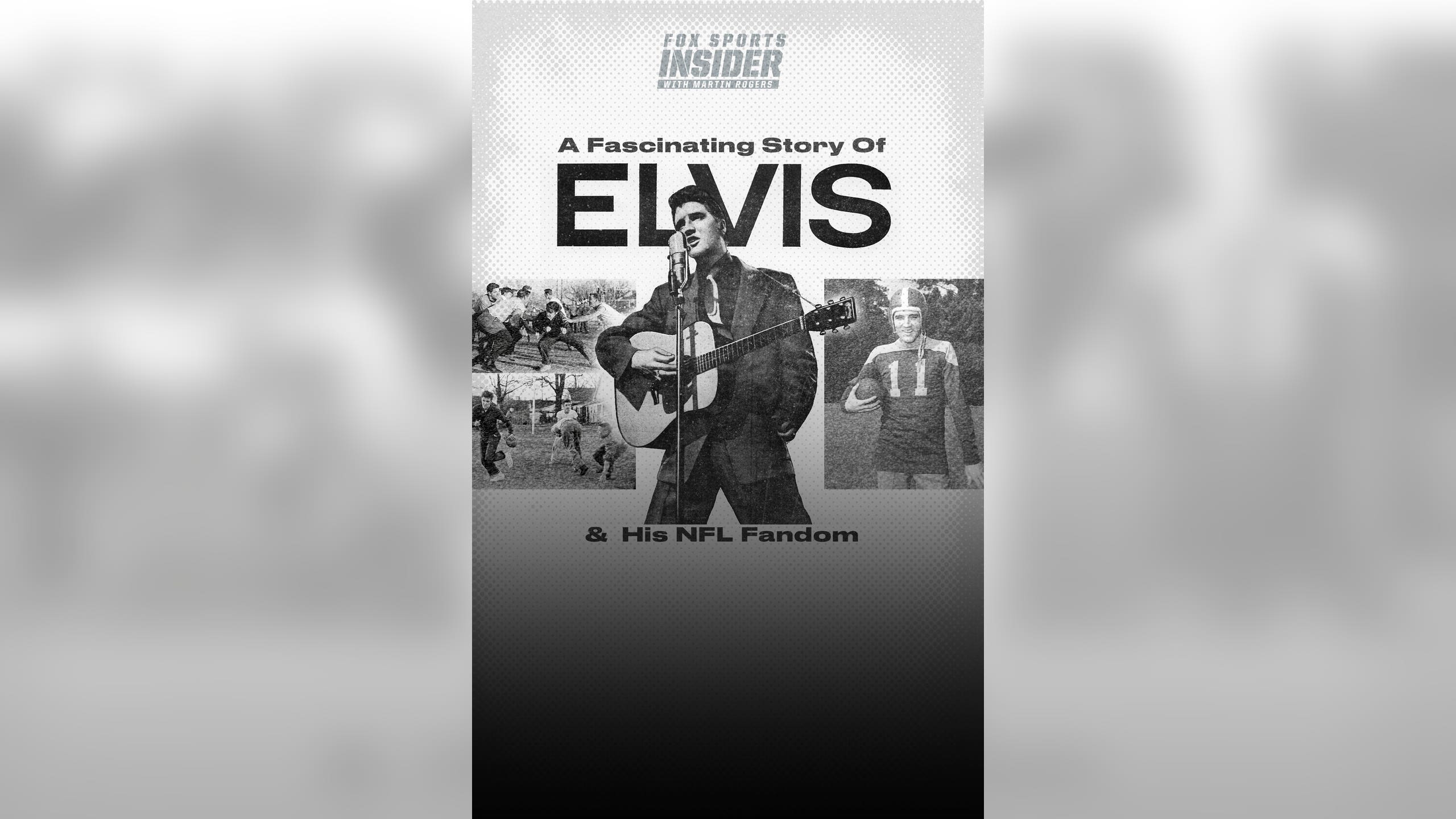 The Story Of Elvis & His NFL Fandom

Terry Bradshaw still remembers when the phone rang at his Las Vegas hotel room, in the midst of the Pittsburgh Steelers’ 1970s glory days, and an unmistakable voice was on the other end of the line.

"I was skeptical at first," Bradshaw told me on a Friday Zoom chat. "But then there is that specific way he spoke, and it was definitely him. Yep, Elvis. Elvis called me up and wanted me to go play football with him. And man, I still think about it now." 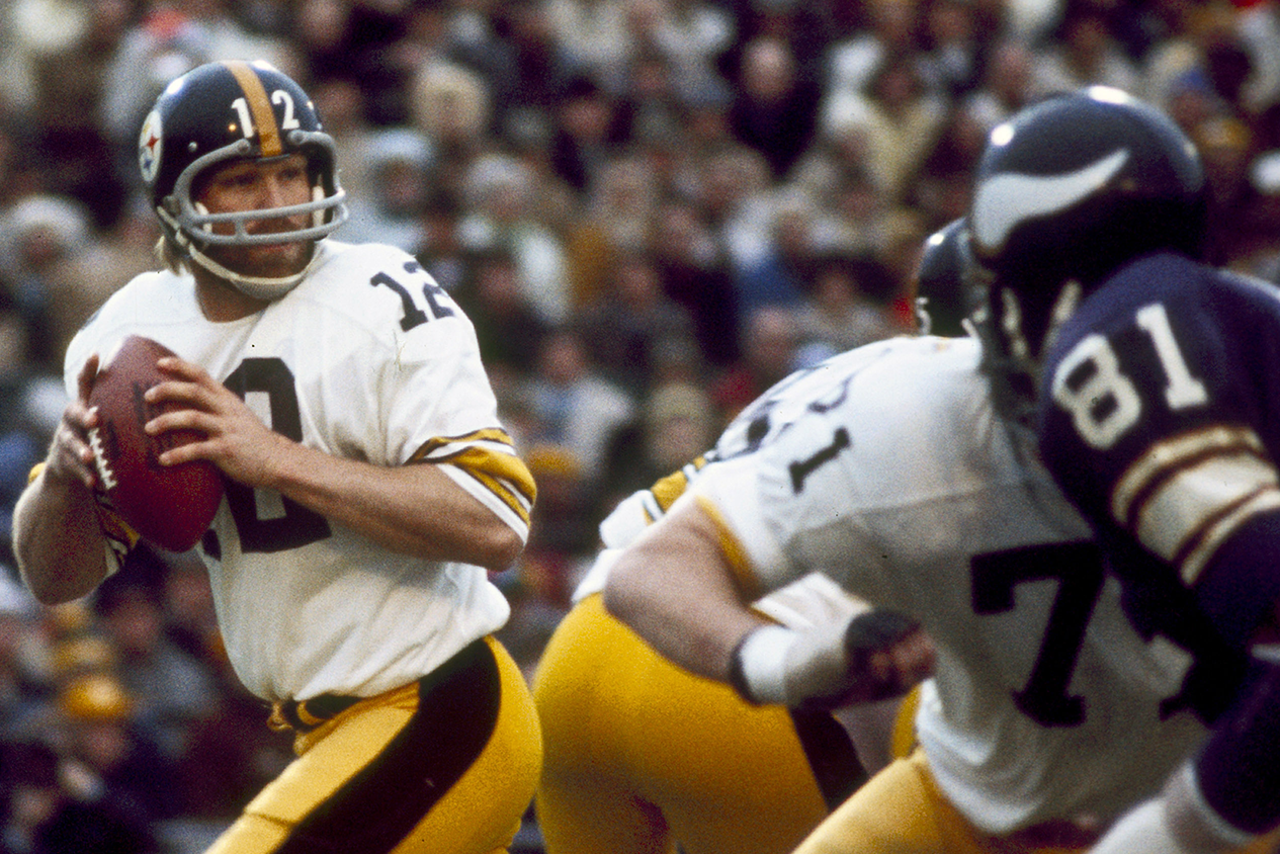 Sure enough, Elvis Presley – eternal MVP of the music world - was indeed seeking the company of current FOX Sports NFL analyst and four-time Super Bowl champion Bradshaw, then in the prime of his playing career. And yes, if you were wondering, there is a specific reason for wanting to discuss the King of Rock 'n’ Roll on this particular week, other than the fact that hey, isn’t it always good to talk about Elvis?

As the Cleveland Browns and Pittsburgh Steelers prepare to do battle in an AFC wild-card clash on Sunday night, there is a lot to unpack; a historic rivalry, the end of the Browns’ infinite playoff drought, Baker Mayfield’s coming of age and Ben Roethlisberger’s countdown to retirement.

However, for those whose love of Elvis goes beyond a mere appreciation for his music, the matchup also brings together his two all-time favorite teams, from a sport that provided him an endless source of fascination in between his famed fried peanut butter and banana sandwiches and his timeless lyrical excellence.

"Elvis loved football far more than most people realize," Angie Marchese, VP of archives and exhibits at Graceland, told me via telephone. "He was truly passionate about it. His mom never let him play in high school but the game interested him his entire life.

"He would go over game tape as if he was the coach, he would draw up his own plays. He would watch as many games as he possibly could and we have archived all kinds of incredible memorabilia." 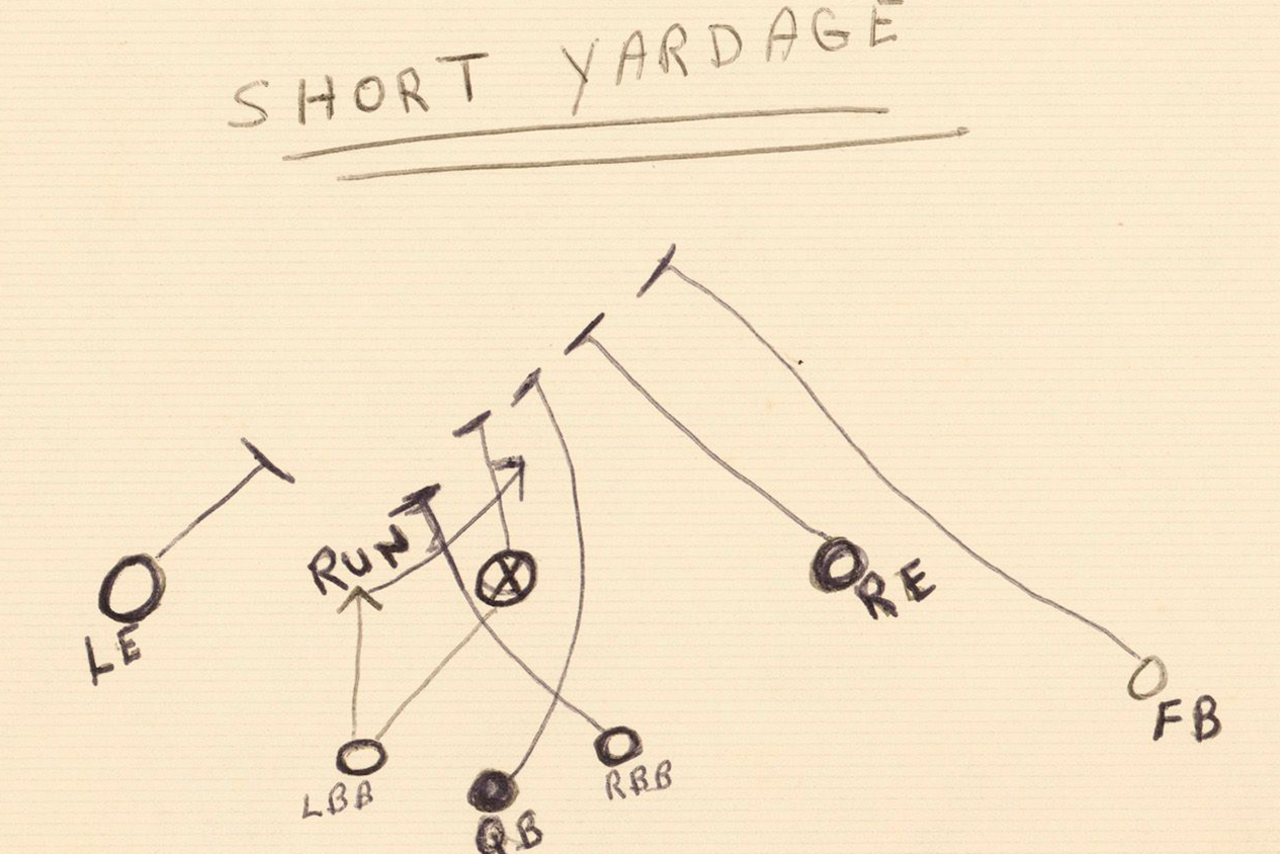 Elvis Presley had a deep love for the game of football, which included drawing up his own plays on scrap paper. Photo Credit: Elvis Presley's Graceland

Marchese is the architect of a popular Graceland display that features an extraordinary array of football-themed Elvis artifacts, including a vintage Browns bobblehead that he collected, plays drawn up for sandlot games, jerseys, photographs and even a rhinestone suit he wore to the opening game of the World Football League’s Memphis Southmen (he was a season ticket holder).

His most beloved team was the Browns through the 60s - more on that later - but by the time the 1970s rolled around, Presley was a devout follower of the Steelers and their star quarterback, Bradshaw, who takes up the story.

"I was in Vegas giving a corporate presentation, because that’s how I made money in the offseason," Bradshaw, who first saw Presley play when he was 5 at the Louisiana Hayride, owns copies of several Presley documentaries and is a particular fan of his gospel music, said. "Elvis called, told me he liked the way I played and invited me to see him, but I had to catch a flight to another city so I had to turn him down.

"It would have been the story of a lifetime, playing backyard football with Elvis. It showed how much of a fan he was, that he wanted an NFL player to come and play with him and his buddies." 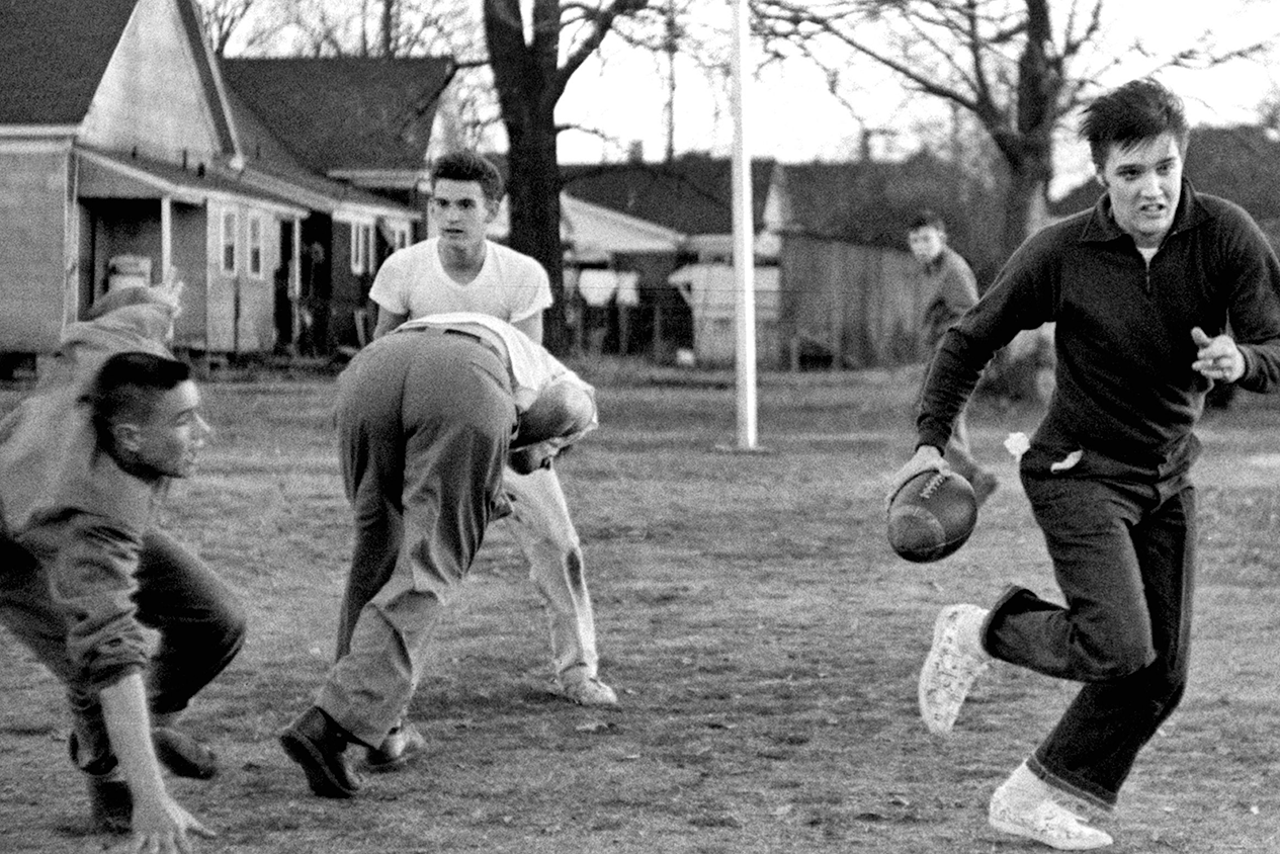 As the depleted 11-5 Browns try to upset the 12-4 Steelers (a six-point favorite per FOXBet), the Elvis connection is the kind of quirky story that adds extra fun to a mouthwatering matchup at the end of a tumultuous season. And the type of thing that leaves a writer wondering if he can get to the end of his column without throwing in a gratuitous Elvis pun or two.

Perhaps the most surprising part of it all is just how much of a football devotee Presley was, displaying the same kind of fandom that millions still afford to his musical legacy. He played during his time in the United States army, won the MVP award of a German touch football league, and continued to arrange his own games whenever possible.

In 1960, he broke his pinky finger while playing football with friends in Memphis, though he swiftly assured music reporters the injury would not affect his guitar skills.

Later on in his life, he organized his own squad – the Elvis Presley Enterprises Football Team – piling players into a specially commissioned bus for games, with each member sporting a new jersey with his name on the back.

His Cleveland connection came through Gene Hickerson, who went to a rival Memphis high school before starring at Ole Miss and then with the Browns. Former Cleveland Browns offensive guard Gene Hickerson, who was close friends with Elvis Presley, is presented with his Hall of Fame ring at halftime of a game between the Browns and the Pittsburgh Steelers.

"Elvis was the biggest star the world had ever seen," Bobby Ray Franklin -– who shined alongside Hickerson in both college and the NFL and gave the speech for his Hall of Fame induction -– told me.

"You couldn’t get close to him in Memphis, but he and Gene were friends. Gene could get ahold of him whenever he needed to."

Every Monday during the NFL season, Hickerson, who died in 2008, would ship Presley game footage of the previous day’s action, for the singer to examine and analyze.

Hickerson was a fiercely competitive offensive guard whose efforts paved the way for three Hall of Fame running backs he blocked for – Jim Brown, Bobby Mitchell and Leroy Kelly – all of whom were present at his own induction.

The friendship with Presley has become part of Hickerson family folklore, as Gene’s son Bob Hickerson told me this week.

"The best story involves Gene and former Browns announcer Jim Mueller," Bob Hickerson said. "Gene would tell stories of Elvis and apparently one time Jim was messing with him and doubted that he really knew him. So Gene picked up the phone and dialed a number then handed it to Jim. On the other end of the line – Elvis.

"Another story is that once when the team traveled to the West Coast and a group of players were figuring out how to get to their hotel, Gene said not to worry about it. He said he had it all taken care of. And before you know it, Elvis showed up to pick them up."

Presley seemed drawn to the physicality of football and held a huge respect for the men who played it. During a rare interview in 1975, he gave some insight into his appreciation for the game. 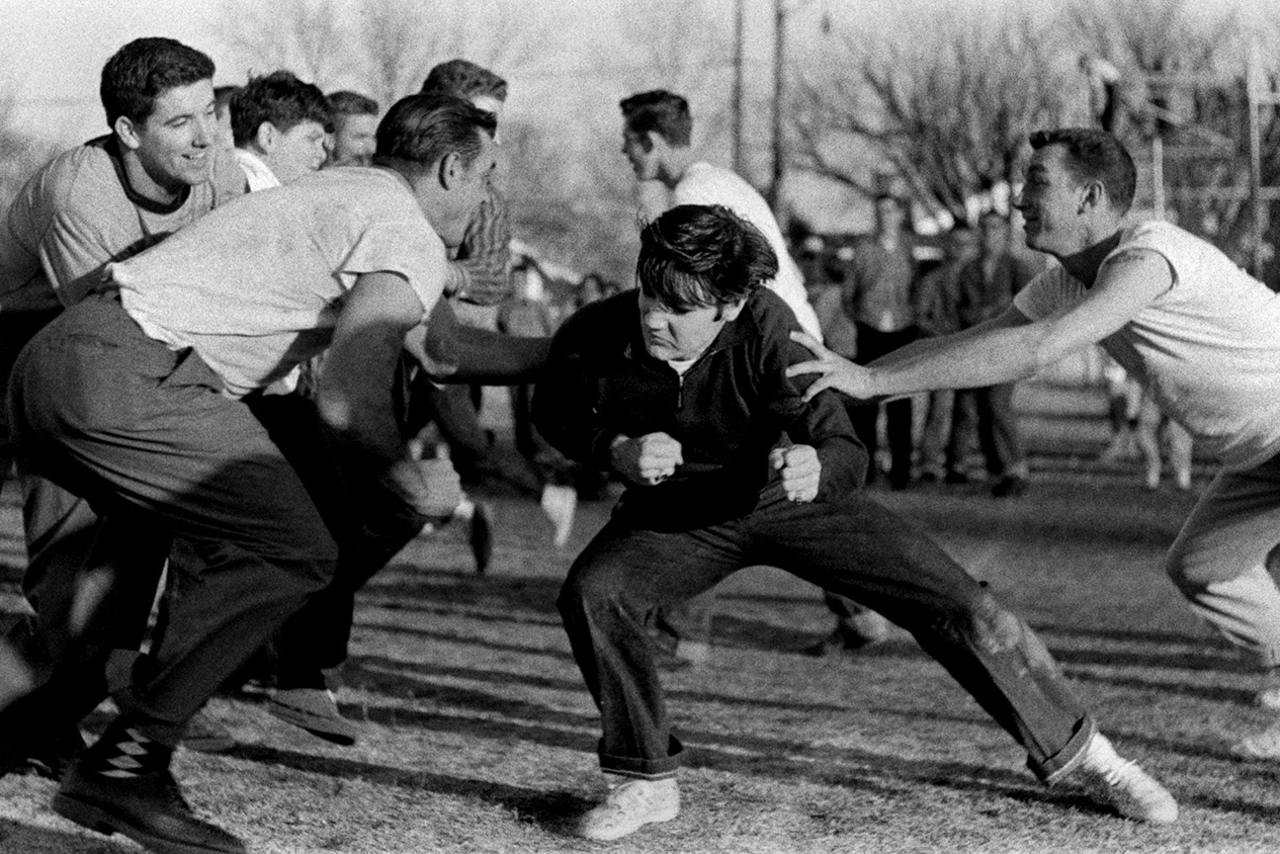 Elvis Presley, who was passionate about football and the physicality of the game, plays a game of backyard football with his friends. Photo Credit: Elvis Presley's Graceland

"I have a great ambition to play football," he told radio reporter Harold Johnson. "I’ve always had and still have, believe it or not. The thing I keep up with most is professional football. I know all the players. I know their numbers and who they play for. I watch all the games I can. I get the films from the teams themselves if I can. Next to the entertainment thing and music, football is the thing that I enjoy best."

Suspicious minds (sorry, couldn’t help it) will be wondering who, if he was forced to choose, Elvis might be throwing his support behind if he’s watching from the great sound stage in the sky.

Bradshaw, naturally, believes it would be Pittsburgh. But on this topic, the decisive voice has to be that of Graceland’s Marchese, given that her working life sees her surrounded by a treasure trove of reminders about what made the great man unique.

"I have to say I think it would be the Browns," Marchese said. "For all the success he had, he always associated with the underdog."

How To Win $500,000 on Bucs-Packers
Jason McIntyre breaks down the NFC Championship and offers his tips to help you win big in this week's Super 6 contest.
3 hours ago

Playing Catch-Up
Lamar Jackson and the Ravens crashed out of the playoffs again. Is a true No. 1 receiver the answer to their postseason woes?
9 hours ago

Tom vs. Time: The Ultimate Mismatch
At age 43, Tom Brady continues to defy the doubters, upending conventional logic and, yes, hunting yet another Super Bowl.
19 hours ago

Lifting Their Voices
On Martin Luther King Jr. Day, Bubba Wallace and other athletes reflected on using their platforms for social justice.
22 hours ago
those were the latest stories
Want to see more?
View All Stories
Fox Sports™ and © 2021 Fox Media LLC and Fox Sports Interactive Media, LLC. All rights reserved. Use of this website (including any and all parts and components) constitutes your acceptance of these Terms of Use and Updated Privacy Policy. Advertising Choices. Do Not Sell my Personal Info