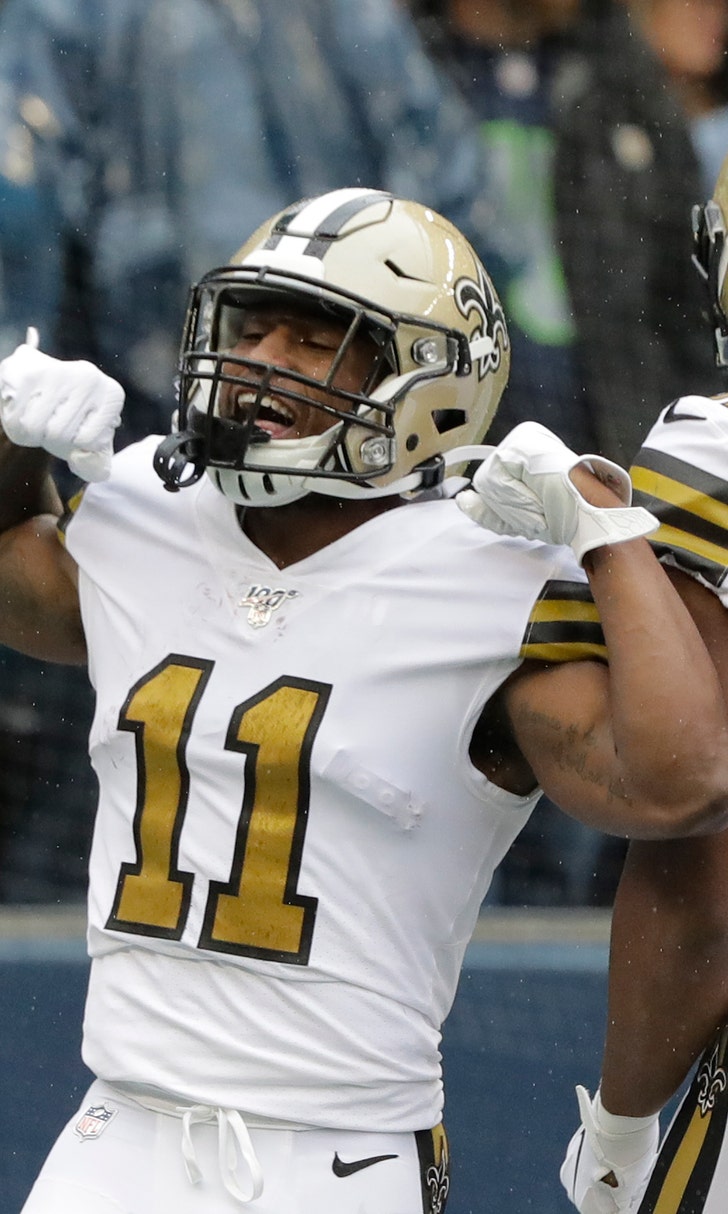 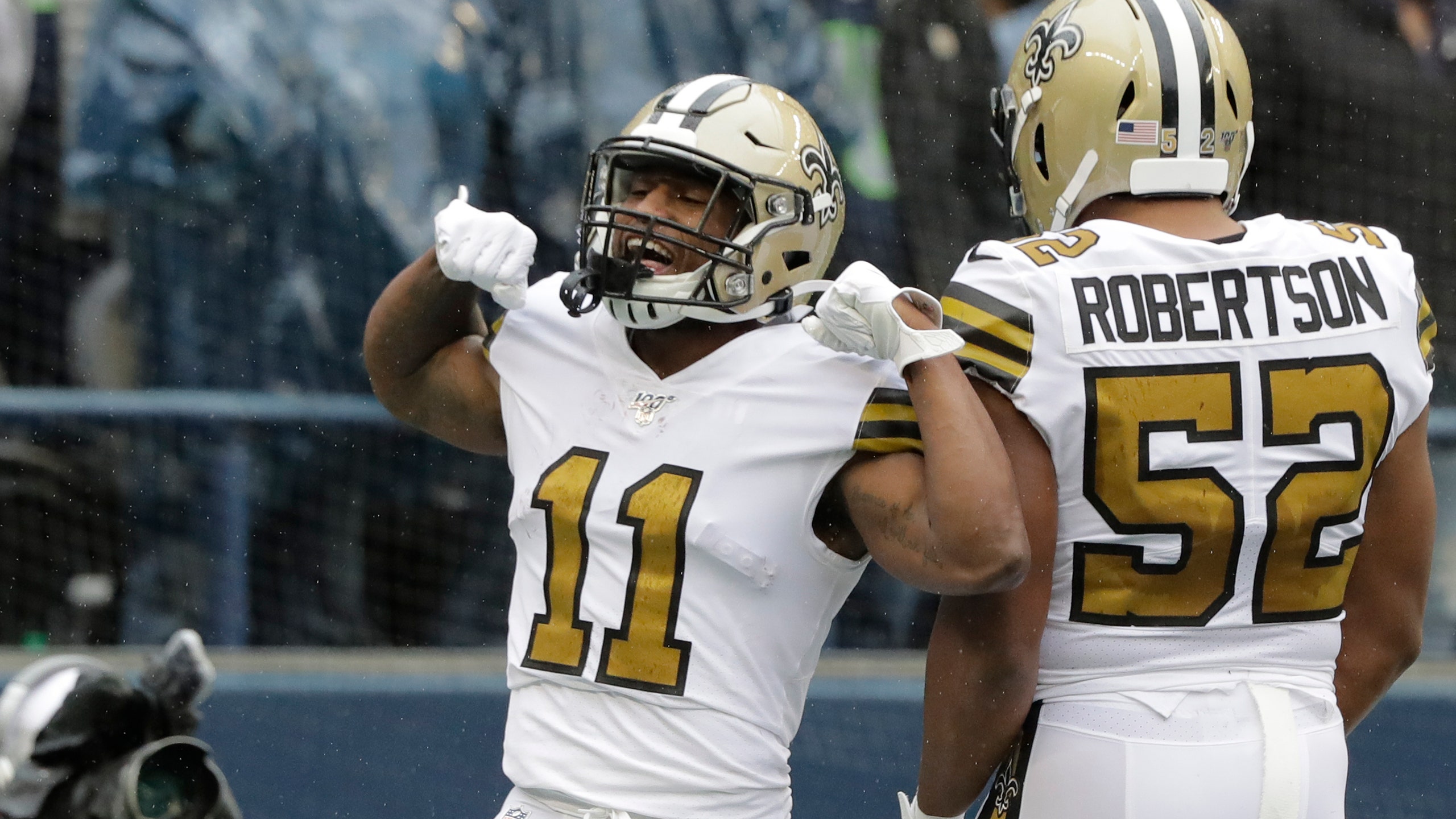 METAIRIE, La. (AP) — Between Thomas Morstead placing punts just short of opponents' goal lines and diminutive returner Deonte Harris deftly darting away from tacklers, the New Orleans Saints like the way their special teams have influenced the outcomes of games.

"We know that yards can equate to points; that's a fact," Saints coach Sean Payton asserted this week while discussing how special teams affect field position. "If you believe 100 yards equals seven points — in and around that number — then that can directly impact winning and losing."

The first full game New Orleans had to play this season without star quarterback Drew Brees — a 33-27 triumph in Seattle last Sunday — served as a reminder of how much can depend on the unit that plays by far the fewest snaps.

Morstead was named NFC special teams player of the week after a game in which he averaged a 52-yard net on six punts and had two punts downed inside the 5-yard line. If Morstead hadn't won that honor, it might well have gone to Harris for his 53-yard punt return touchdown.

"You just kind of go into every game feeling like you are going to be the difference in a positive way, but you just don't know how it's going to play out," Morstead said. "It does feel nice at the end of a game like that, to feel like special teams as a whole made a difference."

Whether those phases could again be a significant factor on Sunday night against Dallas remains to be seen, but Cowboys coach Jason Garrett has taken notice of the Saints' special teams' success.

"What you're trying to do on special teams is do something that can change the game," Garrett said. "Hopefully, you can tip the field, tip the balance of the game and they've been able to do that up to this point."

When the Saints' offense has been at its most prolific, it might have been easy to overlook the kicking game's role, particularly in numerous lopsided victories in which New Orleans punted few times.

But if a game is close, or if the offense is sputtering, then good punting — and good punt returns — are at a premium. And it's not clear if the Saints can replicate the offensive production they've historically enjoyed with Brees while another quarterback is under center.

The Saints used two quarterbacks last week in Seattle. Teddy Bridgewater was the starter and played the vast majority of the offensive snaps. Taysom Hill subbed in as a read-option run threat; he either handed off or ran himself. The Saints gained 265 yards on offense, barely more than half of the Seahawks' 514 yards. New Orleans still won in large part because of special teams play, along with a defensive touchdown on a fumble return.

Hill, who also serves as an up-back on punts, said playing on special teams with the Saints has helped him appreciate how much that unit can influence games, be it with blocked punts, fake punts, returns or simply good punts.

"It's all about, in the NFL, winning the field position battle. We talk about it week in and week out," Hill said. "The punt is the biggest contributor to that, and the punt return. And we saw how that affected the game last week."

Now in his 11th season out of SMU, Morstead has established himself as one of the elite punters in the NFL. He can send booming spirals far down field with accuracy toward one sideline or the other. He can also chip end-over-end, Australian Rules Football-style punts that seem to stick inside the 10-yard line without going into the end zone for a touchback.

"Thomas makes our job really easy," Hill said. "When you pin a team or returner, right or left, outside the numbers, it's really difficult for those guys to get a return."

Morstead, meanwhile, has enjoyed seeing how Harris, a rookie out of Division II Assumption College, has burst onto the scene as a potent return man.

"He's obviously very talented. Everybody can see that," Morstead said. "He doesn't lack any confidence."

Harris did, however, commit his first major mistake in Seattle when he muffed a punt. The Seahawks recovered, but failed to capitalize when Saints made a fourth-down stop.

Morstead said he told Harris: "Don't lose your stinger. Keep being aggressive how you've been. You just can't get ahead of yourself."

After all, the Saints might need a few more good returns while their offense adjusts to life without Brees. And as Saints special teams coach Darren Rizzi noted, the whole return unit can be galvanized by having a big-play threat in its midst.

"Now that Deonte's made a few plays in the return phases, the older guys are having a lot of fun blocking for him," Rizzi said. "When you know you have the potential for a big play to happen, there's just a little more that goes into it."

Three Ideas For Russ & The Seahawks
Martin Rogers presents three options to address Russell Wilson’s displeasure with the way things are being handled in Seattle.
March 1

The Brady Plan
Before he released a workout video, Saints QB Drew Brees' retirement seemed like a done deal. Instead, might he follow Tom Brady's path?
March 1
those were the latest stories
Want to see more?
View All Stories
Fox Sports™ and © 2021 Fox Media LLC and Fox Sports Interactive Media, LLC. All rights reserved. Use of this website (including any and all parts and components) constitutes your acceptance of these Terms of Use and Updated Privacy Policy. Advertising Choices. Do Not Sell my Personal Info