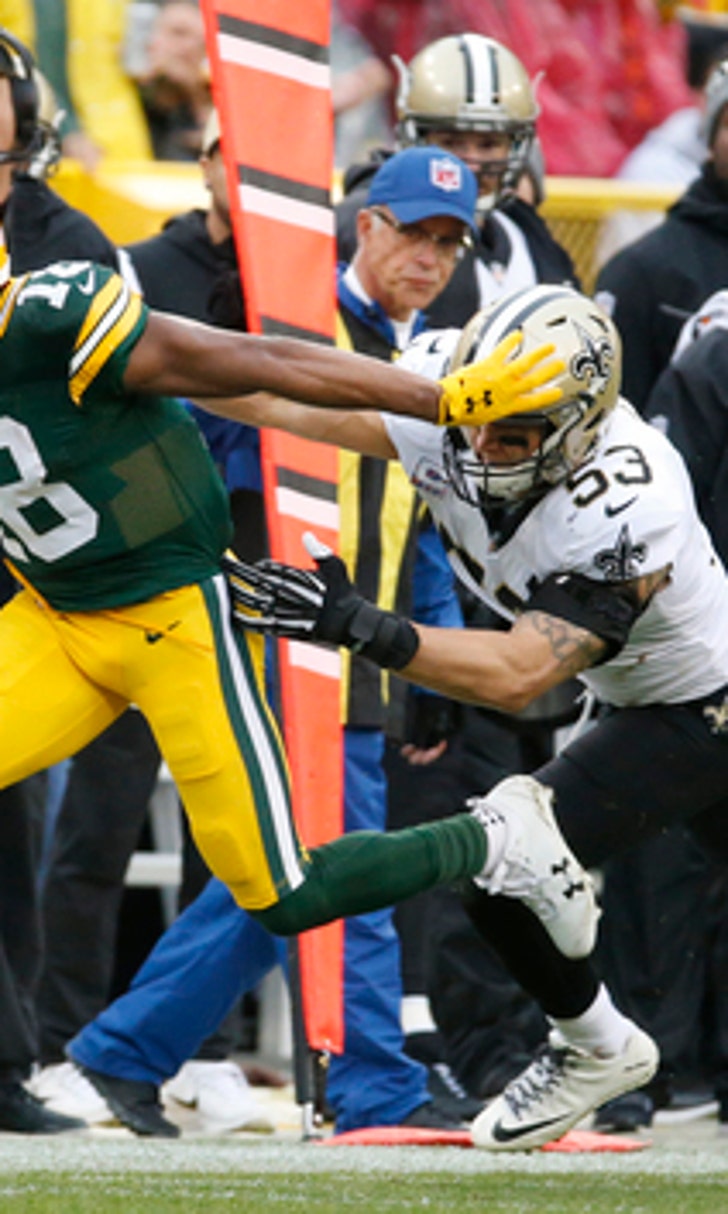 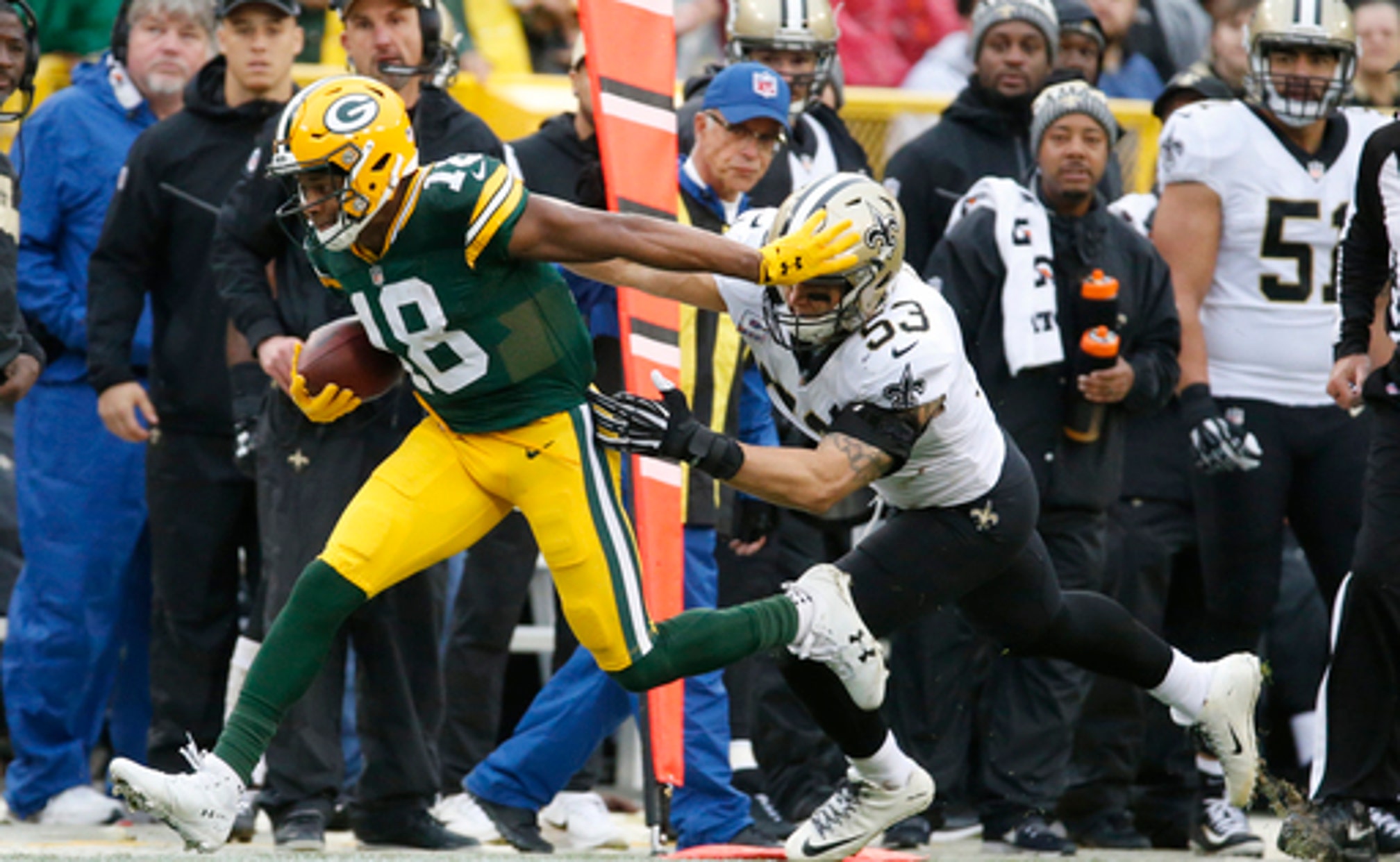 GREEN BAY, Wis. (AP) The way that the New Orleans Saints won on the road on Sunday might serve as a valuable lesson in their quest to return to the playoffs.

The defense gave up a long touchdown run on the first series to the Green Bay Packers. Drew Brees had two interceptions - and the Saints weren't even out of the first quarter yet at Lambeau Field.

But Brees bounced back to throw for a touchdown and run for another, Mark Ingram rushed for a score and the Saints recovered for a 26-17 win.

Will Lutz kicked two second-half field goals, including a 44-yarder to put New Orleans up for good 19-17 with 10:26 left in the game. Brees' 1-yard sneak gave the Saints a two-score lead with 4:55 left.

The sloppy Saints were fortunate to get their fourth straight victory. But after taking the first three games by at least 14 points, they'll savor a win earned following several early mistakes in addition to Brees' picks.

New Orleans' defense gave up a 46-yard touchdown run to rookie Aaron Jones on the opening drive. Lutz had a blocked extra point and New Orleans (4-2) was penalized seven times for 80 yards.

Still, the Saints pulled away late at overcast Lambeau Field, scoring on four second-half drives before running out the clock. It's a good sign for a club hoping to make its first playoff appearance since the 2013 season.

''I wouldn't call us a dominant team, but we're striving to be that type of team,'' Brees said. ''I think what I like is that we're encountering a lot of different situations and things in games and finding different ways to win.''

After holding the Packers (4-3) to a three-and-out inside the 20, New Orleans drove 55 yards in eight plays to seal the game with Brees' sneak over the goal line.

Instead, coach Mike McCarthy turned to a running game that initially threw off the Saints.

Jones had 131 yards on 17 carries. Hundley showed toughness in running for a 14-yard score to give Green Bay a 14-7 lead with 8:37 left in the second quarter.

But the Packers managed just a 46-yard field goal from Mason Crosby in the second half, which gave them a brief 17-16 lead.

The Saints took over from there, and the Packers couldn't keep up through the air.

''I'm particularly disgusted with the second half,'' McCarthy said. ''As a head coach, when your team doesn't perform and drops off the way it did in the second half, I'm disappointed.''

Hundley finished 12 of 25 for 87 yards. He was intercepted by safety Kenny Vaccaro on a deep ball down the middle of the field with 4:20 left, ending the Packers' comeback bid.

Besides Brees' two picks, the Saints' rough first quarter also included a punt fumbled by Ted Ginn Jr. at his 20. But New Orleans got a break and retained possession when the Packers' Josh Jones was whistled for fair catch interference.

Brees added another milestone to his impressive 17-year career, becoming the fourth player in NFL history with at least 500 touchdown passes, including the playoffs. He joined Peyton Manning, Brett Favre and Tom Brady.

Packers: Their playmakers at receiver were shut down with Hundley running the offense. Tight end Martellus Bennett was the leading receiver with 17 yards on two catches. Jones had three catches for 7 yards.

''The name of the game is we have to execute,'' Hundley said. ''I didn't play well enough, we didn't score enough points to win the game.''

Hall of Fame quarterback Bart Starr made an emotional return to Lambeau Field. The 83-year-old Starr joined other former Packers when the organization honored members of the 1967 championship team. That squad that won the ''Ice Bowl'' against the Dallas Cowboys before taking the title against the Oakland Raiders. Starr is recovering from two strokes and a heart attack suffered in 2014.

Saints starting right guard Larry Warford did not return after halftime because of an abdominal strain.

Packers: Bye week before returning to host the Detroit Lions on Nov. 6.

Shredded Cheese
The Packers have become the enigma of the NFL. Is this Green Bay team actually capable of competing for a Super Bowl?
4 days ago
those were the latest stories
Want to see more?
View All Stories
Fox Sports™ and © 2020 Fox Media LLC and Fox Sports Interactive Media, LLC. All rights reserved. Use of this website (including any and all parts and components) constitutes your acceptance of these Terms of Use and Updated Privacy Policy. Advertising Choices. Do Not Sell my Personal Info