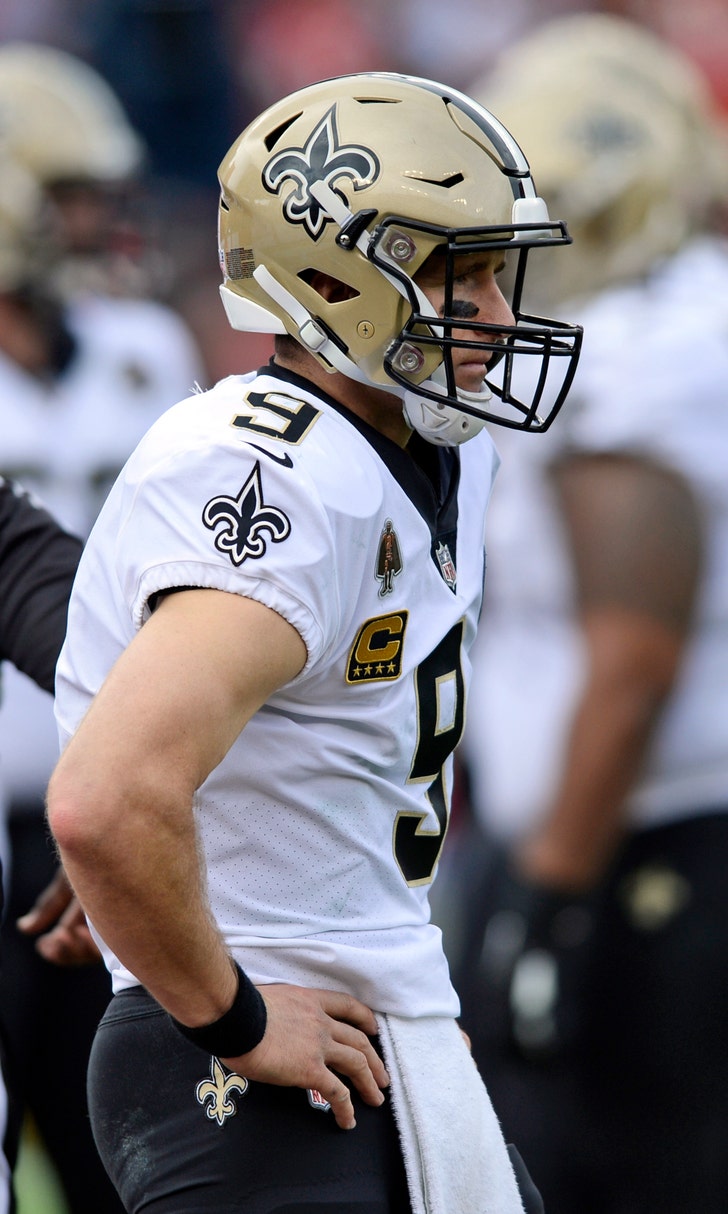 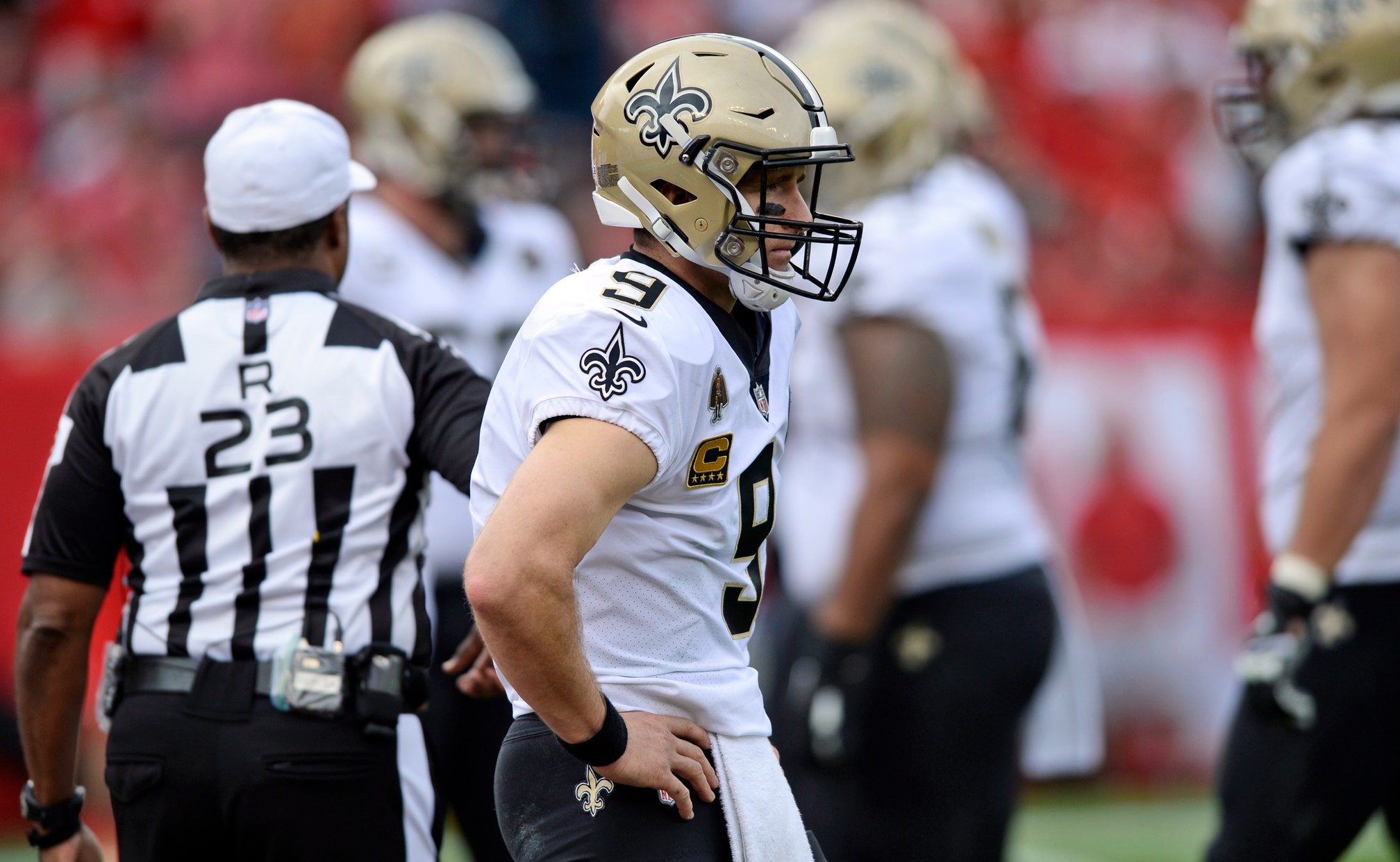 METAIRIE, La. (AP) — Drew Brees dismisses the notion that the Saints' recent downturn in scoring is a sign of vulnerability.

Either that or the 18-year veteran knows better than to acknowledge their past three opponents might have been on to something.

"Bottom line is this: Regardless of how those games played out for the first 3 1/2 quarters, we went into these last two games on the road, in the division, down at half, down going into the fourth quarter and found a way to win," said Brees, whose nose remained scuffed up from a sack on Monday night.

"Whether it's a special teams play, a blocked punt, or a great punt down inside the 10, or a defensive stop, or the defense getting a turnover, or offensively possessing the ball and going and getting points and giving us the lead, everyone has contributed. And it's good to feel like, man, battle tested," Brees continued. "And regardless of the scenario or circumstances we encounter for the rest of the year or any given game, we always have a chance. We always have hope and we're confident."

The Saints currently average 32.8 points, which ranks second in the NFL. They are also 12-2 and one victory away from clinching the No. 1 seed in the NFC playoffs. But they have fallen from the league lead in scoring because in 10 of their past 12 quarters, they've struggled to sustain drives and score, and have been beset by a relative rash of turnovers and penalties.

The Saints scored just 10 points in a loss at Dallas in Week 13, had only three points at halftime of a 28-14 win at Tampa Bay the following week, and are coming off a 12-9 victory at Carolina on Monday night.

Brees said the Saints' 64-yard, fourth-quarter drive at Carolina that consumed 7:07 illustrated why his confidence in New Orleans' offense hasn't wavered, even though the possession ended with no points when Tommylee Lewis fumbled through the end zone for a touchback.

"We convert a couple third downs, a fourth down," Brees said. "We got the ball with 8:51 left, right? And really had a chance to run the clock out if we get that last first down.

"It's those types of drives that I'm talking about that can really help the team when we need it."

Receiver Ted Ginn, who went on injured reserve following arthroscopic knee surgery in Week 6, returned to practice on Wednesday and said he could be ready to play as soon as Sunday, when New Orleans hosts Pittsburgh. Left tackle Terron Armstead said he is close to returning from a torn pectoral muscle, but stopped short of predicting whether he'd play this weekend.

Saints coach Sean Payton said his offense has been hindered by "things that tangibly we can look at and clean up," such as New Orleans' nine penalties for 80 yards at Carolina.

"This past week, we shot ourselves in the foot quite a bit," Payton said. "On the road at Dallas, that's a good defense and we felt it was going to be a low-scoring game."

"It seems like every week Drew is breaking a new record," Tomlin said, adding that Alvin Kamara and Mark Ingram "are awesome both in the running and passing game."

"They are formidable for all of those reasons and others," Tomlin said.

Saints right guard Larry Warford said he senses that recent slippage on offense stems more from miscues and missed assignments than anything opposing defenses have done.

"You kind of lose focus with that stuff sometimes," Warford said. "But having these last three games, being able to look at it, we know now it's just like, 'All right, we've got to get our fundamentals back together because we're slacking on the simple stuff, and it's the easy stuff that we can control.'

"We're not worried about what people are saying about defenses figuring it out."

A return to the Superdome, where the Saints are 5-1 and averaging 38 points per game, also could help.

"You always have that advantage at home — familiar place, familiar crowd. You get better communication, especially throughout the offensive line," Warford said. "We're looking forward to getting back to the dome and trying to light it up."

Saints Barely Escape Chargers
The Saints became the third NFC South squad to earn a narrow victory over Justin Herbert and the Chargers this season.
6 days ago